Explore the haunting remains of an Antarctic whaling boomtown

When boats approach the barren outer shore of an active volcano just off the tip of the Antarctic Peninsula, they must dodge icebergs and hidden rocks. Inhabited only by mosses, nesting seabirds and an enormous colony of chinstrap penguins, the island might seem from a distance to be an unlikely location for Antarctica’s only successful commercial outpost.

But Deception Island, aptly named, hides its history. The island conceals a secret bay, a sunken caldera, accessible from the sea by a single narrow passage. There, a black gravel beach hosts the scattered remains of rusted structures and whaling equipment, and water sometimes releases magma-heated steam into the frigid air.

View a 3D model of the remains of a water boat resting in the sands of Deception Island below. (IOS devices will be able to view the wreck in augmented reality): 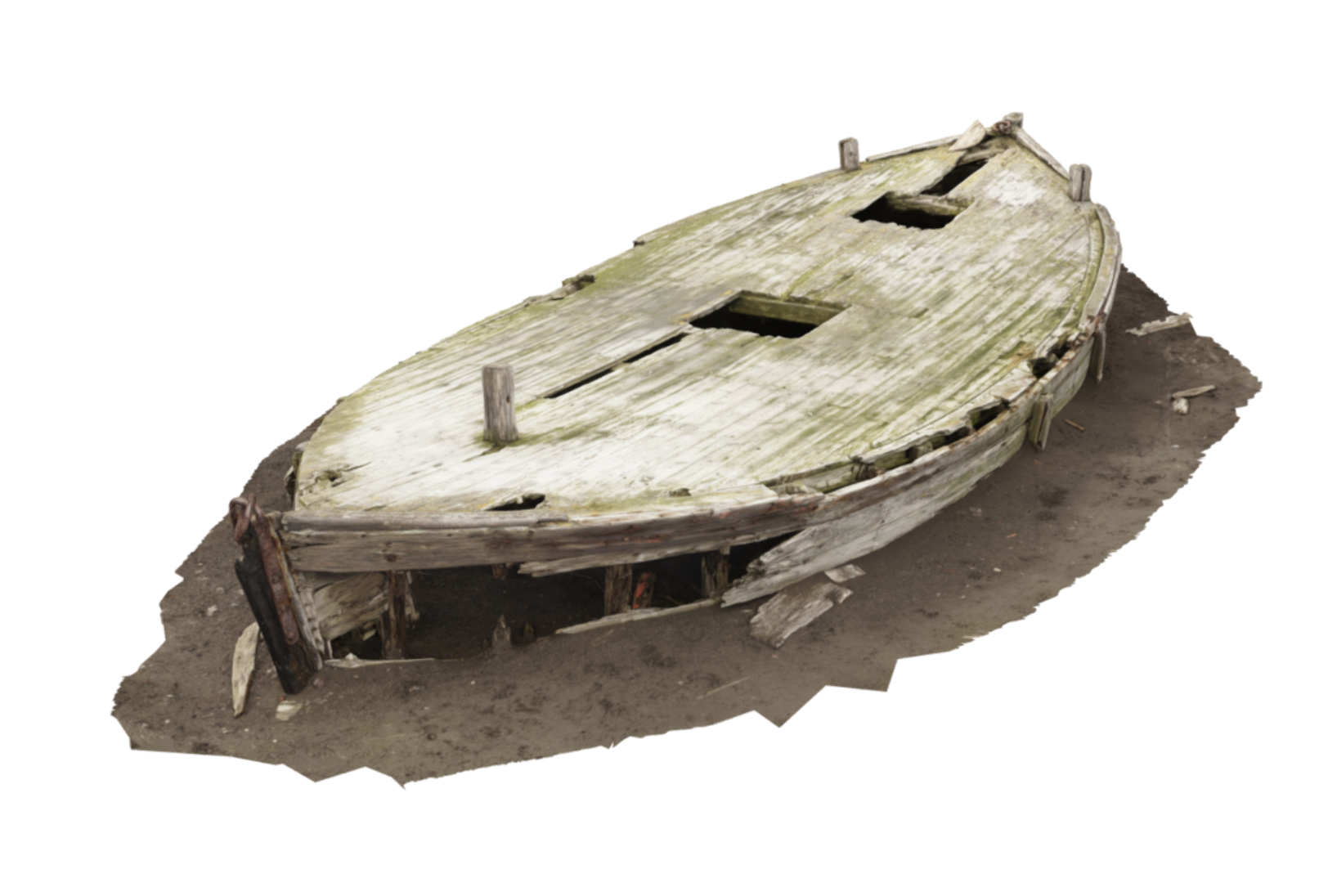 “The whole place has a haunted feel,” said William Brangham, a PBS NewsHour correspondent who recently reported on the last continent as part of a broadcast and podcast series. “Bleached-out whale skeletons sit on the beach, not too far from the huge, hulking round tanks that once held thousands of gallons of whale oil. Now they just sit there, rusted and empty.”

When those tanks were built in the early 20th century, Deception Island hosted hundreds of men who spent the southern summers harpooning and butchering whales, rendering their blubber and boiling their bones and meat to take full advantage of the oil the animals produced. Bloody red runoff and the stench from the flensing plant attracted flocks of birds — before their food source disappeared.

Now, the island is fading back into Antarctica’s predominant color scheme of black and white, except for the slowly rusting remains of the tanks and an occasional interjection of tourists in brightly colored coats.

Two hundred years ago, Connecticut explorer Nathaniel Palmer reported the location of Deception Island and its inner harbor to the rest of the New England fleet. The bay would prove perfect for the sailing vessels that came in search of nearby fur seal colonies.

“They filled their ships with fur seal pelts and brought them to China to be made into hats,” said geographer Steve Dibbern of the Antarctican Society, who has spent 40 years collecting historical material about Deception Island. Within four years, the busy hunters of what was then called “Yankee Bay” killed approximately 500,000 animals, devastated the species and moved on to other pursuits and other locations.

For nearly 80 years, the island was returned to relative peace. But things were changing in the Northern Hemisphere. As whale populations there were overexploited and whale oil stayed a valuable commodity in American and European households, attention turned to the Southern Ocean and its abundant animals.

In the first decade of the 1900s, whaling vessels began to arrive in Antarctica with steam power and new, improved hunting technology like the harpoon gun. Norwegian factory ships slaughtered whales efficiently, stripped them of their blubber, and boiled the fat into high-quality lamp oil. 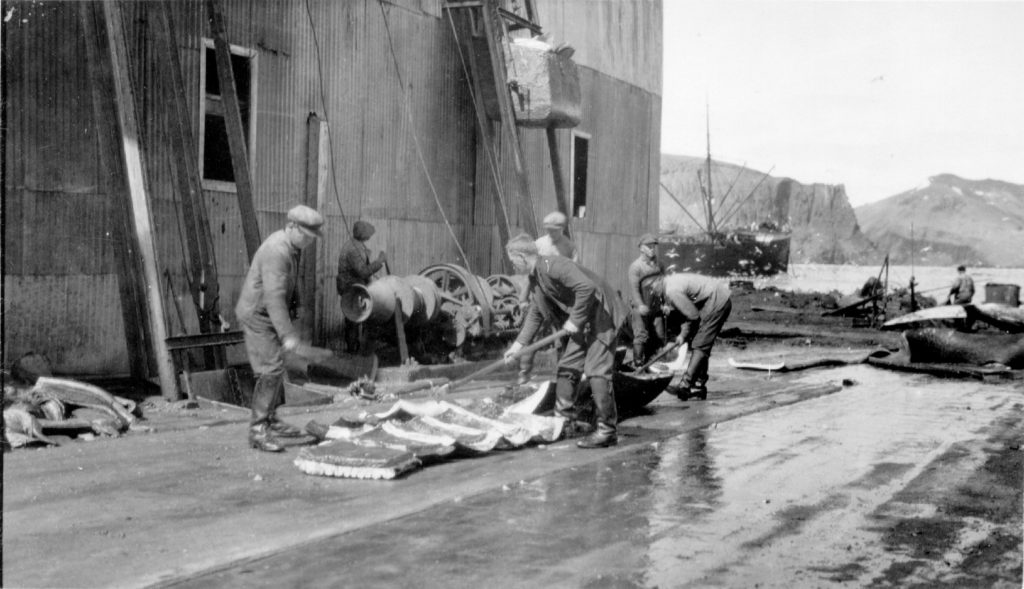 Between 1912 and 1931, factory workers cut up whale blubber and meat for the pressure cookers on Deception Island, Antarctica. Photo courtesy of the Wilkins Collection, Byrd Center/Ohio State

Critically, the ships weren’t big enough to process entire whale carcasses. So, in 1912, the Hektor Whaling Company started constructing Antarctica’s only land-based commercial operation on the shore of what would become known as Whaler’s Bay. The operation added ramps and mechanized winches that allowed entire whales to be dragged ashore.

The whalers built pressure cookers for the cetacean meat, a guano mill made for grinding whale bones into fertilizer, a machine shop, dormitories and a small hospital — at one point, Dibbern said, the factory even included a pigsty, where whalers could raise some food that wasn’t canned goods, penguin eggs or whale meat.

Processing whales into oil required a huge amount of freshwater, so some crews dug wells into the island and others manned the water boats. Whalers would tow full water boats from nearby glaciers, where they were filled with melted ice, to the factory ships and the land-based whaling station.

The invention of offshore whaling in 1925 spelled the end of operations on Deception Island. Newer, bigger, self-contained ships could haul even the largest whales aboard to be butchered, making land-based facilities obsolete.

Whaling activity didn’t stop right away — all told, more than 2 million whales were slaughtered in the Southern Hemisphere during the 1900s — but after 1931, the facilities on Deception Island were left to the mercy of harsh winters and volcanic ash.

Since then, some populations of whales near Antarctica have rebounded. Humpbacks, for example, are once again a common sight along the Antarctic Peninsula. Antarctic blue whales, on the other hand,

Brief scientific expeditions and occasional military dispatches have landed on the island, but volcanic activity keeps permanent human settlement off the table. The tens of thousands of human tourists who pass through each year sometimes swim in the volcanically warmed waters of Whaler’s Bay, and often stop to photograph the rusting oil tanks and dried whale ribs that litter the beach, but they don’t stay.

Despite — or maybe because of — its current abandoned state, Dibbern is still captivated. He’s visited three times and published a book after four decades of research and obsession.

“People lived there, and made a living in one of the harshest places on Earth,” Dibbern said. “I’m just dying to go back. I’m 74 and I think I’ve got at least one more trip left in me.”

Left: Rusting whale oil tanks are some of the only remnants of the Deception Island whaling operation. Image by William Brangham