In 2016, the Great Barrier Reef experienced the worst mass bleaching event on record due to a marine heat wave, sapping the corals’ color and making them more vulnerable. Now scientists believe that the heat wave led to the worst possible outcome: outright cooking and killing some of the creatures. And the bad news doesn’t stop there.

The study, published Thursday in Current Biology, also showed that after corals die, their exposed skeleton is overrun and weakened by the coral’s surviving microbes. Coral skeletons make up the reef architecture and provide habitat for an estimated 25 percent of all marine species. Without this underlying reef, those animals may soon be homeless.

Previously, scientists thought some corals were dying because they couldn’t recover from bleaching, a conclusion that offered a glimmer of hope.

“A bleached reef has the capacity to recover,” said Tracy Ainsworth, a coral biologist at the University of New South Wales who led the study. “But now we’re starting to talk about a very clear mortality event; a very fast and well-defined mortality event.”

Without the option to recover, the world may start seeing corals die off faster than expected. And the death of corals would come with a steep cost for humans: flood protection that’s worth tens of millions in the U.S. alone, plus an estimated value of almost $30 billion each year globally in tourism, fishing and other benefits. 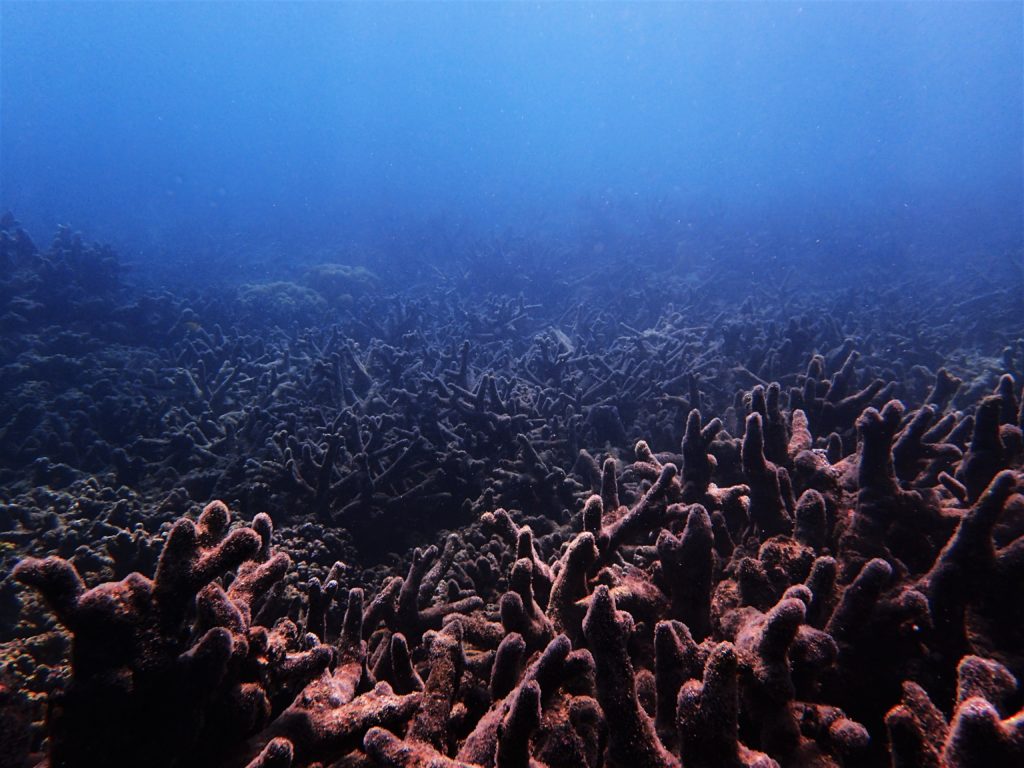 A degraded section of the Great Barrier Reef. Photo by Emma Camp

Plant-like, microscopic algae — called zooxanthellae — live inside a coral’s tissues. The algae convert sunlight into food for the coral, and in exchange receive a place to live. But at high temperatures, these algae become toxic to the coral and are expelled in an event known as bleaching, which leaves the coral susceptible to starvation.

After the 2016 heat wave, biologists set to work studying the toll bleaching took on corals. They noticed the remaining coral skeletons were brittle, breaking and crumbling.

“No one quite had any clear answers to why in particular the skeleton of the coral was so weak,” Ainsworth said.

So she teamed up with the National Oceanic and Atmospheric Administration — which collects satellite temperature data — to recreate the bleaching conditions that the Great Barrier Reef experienced in April and May 2016.

The team chose to study two types of stony corals that showed high death rates during the bleaching event. They collected 32 animals and 160 fragments from spaced-out portions in the Great Barrier Reef around Heron Island, Australia. They put corals in an outdoor pool about the size of a four-person hot tub and slowly ramped the temperature up to 93.2 degrees Fahrenheit, the point at which bleaching occurs.

A computerized tomography (CT) scan uses X-rays to probe the structure of a coral skeleton. This is how researchers discovered that corals lost 10-15 percent of their skeleton after microbe colonization. Image by Tracy Ainsworth

The researchers were particularly interested in how quickly the corals died after heating, so they could assess if death was caused by starvation from bleaching, or from heat alone.

Then the team looked for structural changes to the coral skeleton. They measured density using X-ray images, and hardness using a sclerometer — a device that drops a hammer on an object and measures how much the hammer rebounds. The higher the rebound, the tougher the coral.

The heat conditions bleached the corals, but it also killed them faster than would be expected from starvation.

Within two days of coral death, the microbial inhabitants — namely cyanobacteria and other types of algae outside of zooxanthellae — surged in population. They grew outward through small skeletal pores and completely encased the skeleton in a film.

After encasement, the skeletons lost 10 to 15 percent of their density within two weeks, which resulted in a drop in strength of about 15 percent, Ainsworth said.

To see if other algae play a role in the skeleton-weakening mystery, the team shined specific colors of light onto their coral samples before and after death.

Because each type of algae contains different types of chlorophylls — light-reactive pigments — the algae absorb and reflect different colors of light. By measuring the light that was reflected back, the researchers could tell how much of each type of algae stuck around after death. 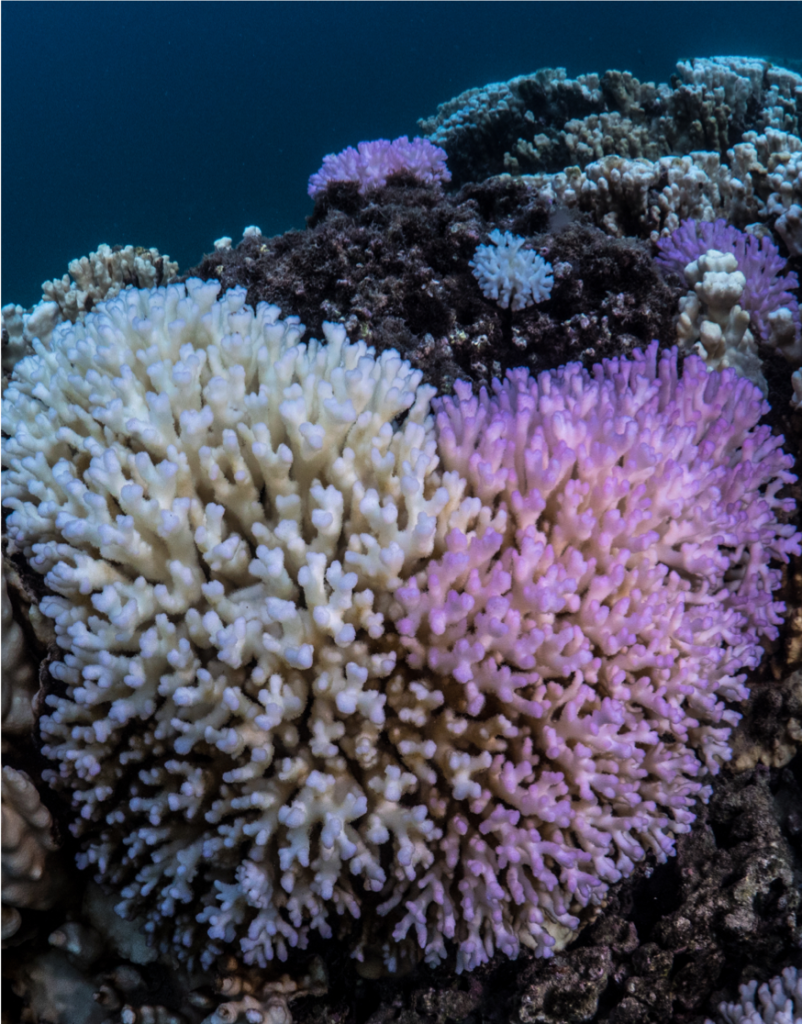 Their light experiments revealed the main microbe responsible for the skeleton-disintegrating film was another type of microscopic algae, called Ostreobium. It was previously hypothesized that Ostreobium aids corals after bleaching by providing some nutrients after they expel their zooxanthellae. This new result suggests Ostreobium tears down the remaining reef.

The researchers credited the density decrease to calcium loss, which dissolves when the coral skeleton is exposed to the acid by-products algae make during growth.

“We are losing the actual three-dimensional framework in a really short time period,” said Rebecca Albright, a coral biologist at the California Academy of Sciences, who was not involved in the study.

This three-dimensional reef architecture not only provides a refuge for many species — a hiding place for prey and a physical structure to bore into for microbes — coral reefs disperse 97 percent of waves destined for the coast. By blocking the energy packed in these waves, coral reefs prevent an estimated $94 million in flood damage yearly just in the U.S. alone.

Scientists had predicted skeletal breakdown of corals would occur on the scale of years to decades, not days to weeks as this new study suggests.

Scientists had predicted skeletal breakdown of corals would occur on the scale of years to decades, not days to weeks as this new study suggests, Albright said. And marine warming events are only expected to happen more often and get more severe, meaning the Great Barrier Reef could disappear sooner than scientists expected.

“What we thought was the worst-case scenario was global mass bleaching events that were impacting the majority of reefs worldwide on short timescales,” Albright added. But the direct heat-killing of corals, and rapid increase in dissolving skeletons “is even a worse scenario than that, which is pretty sobering.”

This grim expectation only reinforces what coral biologists have already been saying — there is a dire need to decrease carbon emissions in order to curb the increase in global temperatures.

Ainsworth said this news can be overwhelming, but she remains optimistic. “We as a society have changed the environment and caused this problem…If we do make better decisions,” even small ones, like reducing plastic use and taking public transportation, “we can actually change the course for reefs.”

How the Cayman Islands could become a new health care destination