This new nanotech could help clean up Earth’s microplastics

Microplastics are everywhere–the ocean, the air, marine animals, pristine lakes, our food and, as recently discovered, in human excrement. But because they are so tiny — 5 millimeters across or smaller — microplastics are challenging to remove.

Now, scientists have designed reusable nano-sized reactors — called nanocoils — that can trigger microplastic breakdown. The work, published Wednesday in the journal Matter, could someday be applied to wastewater, cutting off the flow of microplastics before they are flushed into the environment. The study also found the broken down pieces of the microplastics could be used as carbon-based food for plant-based lifeforms like algae.

Although we’ve known plastic pollution is rampant, scientists have only recently realized how prevalent microplastics are in the environment. Apart from aggregating in the oceans, where they make up 94 percent of the Great Pacific Garbage Patch, microplastics can end up in our wastewater, and ultimately our drinking water.

The origins of microplastics are known — the disintegration of larger plastics into fragments, microfibers, beauty products and even tires, to name a few. But there’s also a lot researchers don’t know, like how to best track the global movement of plastics from production to pollution or if microplastics cause harm after ingestion.

“Trying to understand the big picture on plastic and be able to weave a story together is going to take decades,” said Christopher Reddy, an environmental chemist at Woods Hole Oceanographic Institution, who was not involved in the study.

Addressing plastic pollution is going to require myriad solutions, including the reduction and recycling of plastic. But even if we stopped all plastic production today, we’d still have billions of tons to clean up worldwide.

Nanocoils are an emerging hybrid material, combining a metal that causes a chemical reaction with a well-studied piece of nanotechnology called a carbon nanotube.

In this case, chemists mixed carbon for making nanotubes with a metal called manganese. When combined, the manganese metal and the carbon react and grow in a helical direction to form coils, hollow nanostructures — hence, “nanocoil” — that measure in lengths of about half the width of a human hair.

Once formed, the nanocoils were mixed with microplastics isolated from store-bought facial cleansers, which feature microplastic exfoliants that often get washed down drains. 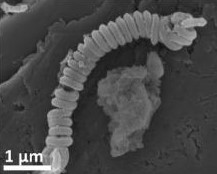 A microscope image of a nanocoil. One micrometer (µm) is about half the size of a bacterial cell. Photo by Kang et al., Matter, 2019

The nanocoils don’t actually break down microplastics. Instead, the manganese inside the nanocoils generates free radicals — short-lived, highly reactive oxygen molecules — that attack the microplastics and cause them to fragment into smaller pieces.

Eventually these microplastic fragments are converted to carbon dioxide gas and water, said Xiaoguang Duan, an environmental chemist at Adelaide University who co-led the study.

The team weighed the microplastic sample before and after the reaction and then calculated how much carbon was lost due to carbon dioxide evaporation.

A nanocoil acts as a case for the manganese — a stable container that can prevent the metal from leaching into the environment and becoming a source of pollution in itself. When the reaction was done, the team used a magnet to pull out the metallic nanocoils from the mixture.

The researchers also found the microplastics that hadn’t become carbon dioxide after the 8-hour reaction had been severed into smaller, molecule-sized shards. By running these fragments through a machine that weighs molecules–called a gas chromatography mass spectrometer–the researchers discovered more than 20 types of fragments.

Worried that those shards might be toxic themselves, the team measured how well algae grew in the presence of those microplastic shards.

When these microplastic fragments were added to a growing algae colony, the algae actually grew faster than colonies without the fragments, leading the researchers to conclude that the plants were using fragments — some as small as a handful of atoms — as a carbon food source. Algae, like any plant, consumes carbon to make energy.

That’s unexpected but could be a boon for the environment.

“The most interesting part [is] we found we do not have to completely degrade the microplastic into carbon dioxide and water,” Duan said. “We can just decompose the [microplastics] into smaller organic molecules, then we can use the less toxic organic molecules as a carbon source for growth of algae.”

The nanocoils could also be used three times before their free radical-generating power started to drop off, and by the fifth use, they were only half as active as their first try.

That wouldn’t be the case for wastewater, which is a complicated muck of organic materials. The study also only looked at one source of microplastics, so the nanocoils may not work on other kinds.

But understanding how plastics can be eliminated is an important piece of a larger picture, Reddy said. By studying these weaker links, scientists could learn how to better design plastics so they don’t cause such a problem when we dispose of them.

Left: Scientists have designed reusable nano-sized reactors — called nanocoils — that can trigger microplastic breakdown. The work could someday be applied to wastewater, cutting off the flow of microplastics before they are flushed into the environment. Photo by REUTERS/Eric Gaillard