Humans may sometimes regard robots with apprehension or resentment over the increasing automation of labor, but the coronavirus pandemic is showing how the two can work together in new ways that might save lives during a crisis. Around the globe, robots and other technologies, like drones and telehealth devices, are being used in a variety of settings and capacities to assist in the COVID-19 response since there is a level of elevated risk for human workers.

Automated devices have delivered meals to quarantined travelers in a Chinese hotel; enforced curfews in Tunisia; scanned visitors for fevers entering a South Korean hospital; monitored patients in a hard-hit Italian city; and tracked social distancing compliance from the skies in a number of cities around the world, including Elizabeth, New Jersey.

“In a disaster, you don’t add completely new things. It takes years to build reliable systems.”

Many of the technologies were available commercially prior to the coronavirus outbreak, said Texas A&M University professor Robin Murphy, who studies how robots can be deployed during disasters. But now, “they are being used 24/7 and adapted to fit the needs of those using them,” Murphy added. “In a disaster, you don’t add completely new things. It takes years to build reliable systems.”

Murphy and her colleagues are tracking how drones and ground-based robots have been deployed during the coronavirus outbreak. “The most common uses we’re seeing right now are in public safety, quarantine enforcement and disinfecting of hospitals,” Murphy said. 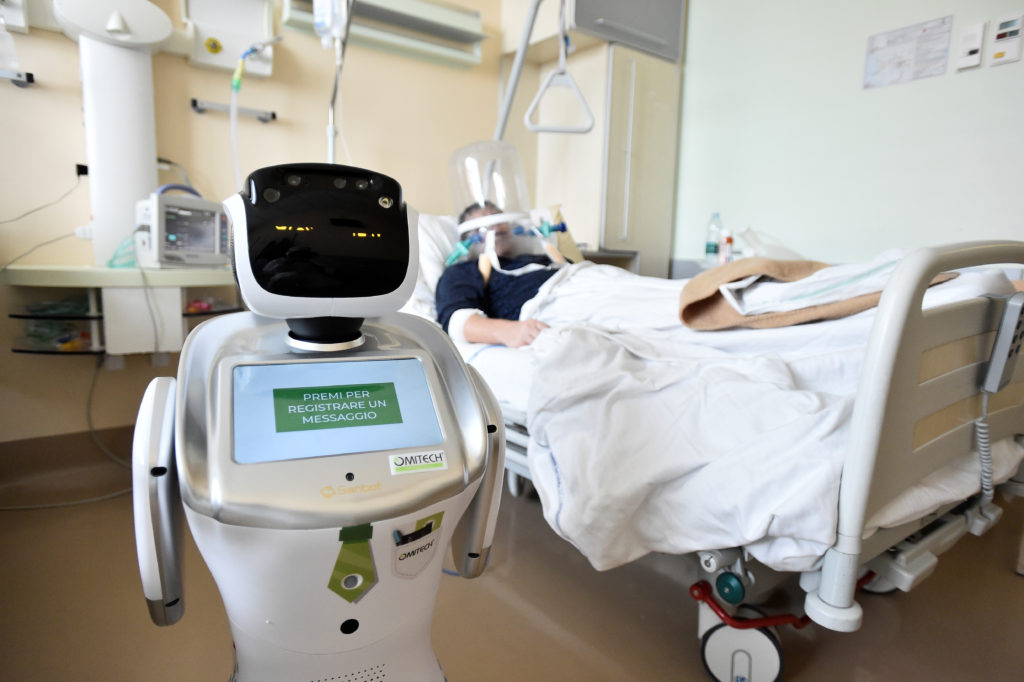 A robot helps medical teams treat patients suffering from the coronavirus disease in a patient’s room in Varese, Italy, on April 1, 2020. Photo by REUTERS/Flavio Lo Scalzo

This is not the first time robots have drawn attention during an infectious disease outbreak. During the Ebola epidemic in West Africa between 2014 and 2016, the White House Office of Science and Technology Policy and the National Science Foundation convened workshops with scientists and researchers who outlined three areas where robotic systems could prove useful in future global health outbreaks: clinical care, logistics and reconnaissance. More recently, an international group of prominent roboticists, including Murphy, wrote an editorial in the journal Science Robotics and identified a fourth promising area — continuity of work and maintenance of socioeconomic functionings — based on the huge financial impacts of the current crisis. For example, they suggested more research should be done on remote operation of key sectors of the economy, “from manufacturing to remotely operating power or waste treatment plants.”

But, the authors concluded, there has not been sufficient funding for infectious disease-related robotics research in recent years. “Without sustained research efforts robots will, once again, not be ready for the next incident,” they wrote.

In general, robots and similar technologies are expensive to purchase and maintain, which often limits their wide-spread use. According to Murphy, an important takeaway from the current outbreak is, when available, robots can be used effectively to support front line workers, not take away their jobs. “They can perform tasks that a person could not do, or do safely, and they can take on tasks that free up responders to handle the increased workload,” said Murphy.

However, integrating robots and other new technologies into existing health care workflows, can present significant hurdles. That’s an issue Oregon State University robotics professor Bill Smart has been studying. “If you go into a hospital, the nurses, doctors, even housekeeping, have a routine that they’re very comfortable with,” said Smart. “If I put something you’re not familiar with into that environment, into that workflow, then the chances of something going wrong are high. And if something goes wrong, someone could die.”

Funded by the National Institutes of Health, Smart has been collaborating with Médecins Sans Frontières (Doctors Without Borders) to learn how robots could help reduce infection risks for front-line health care workers. 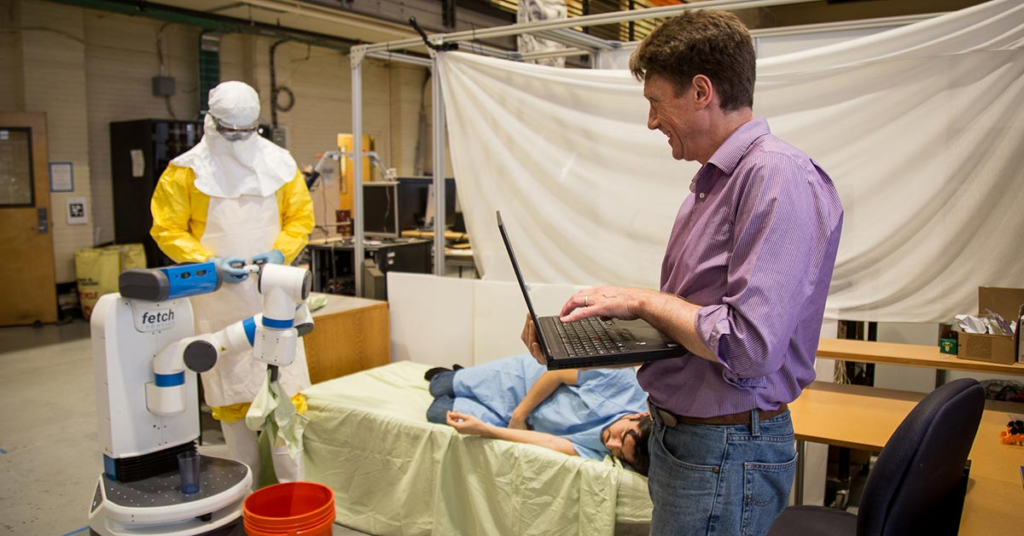 Graduate students Austin Whitesell and Alan Sanchez and Bill Smart, professor of robotics, demonstrate an experiment simulating how robots might be used during Ebola outbreaks. Photo by Oregon State University

“I think the trick with robots, with any technology, is picking your battles,” Smart said. “Robots aren’t good at everything. It’s figuring out what they are good at and getting that in there without disrupting the workflow.”

If, in the future, we begin to rely more on robots interacting with patients, Smart says his research shows it’s important to remember people need human touch and connection during their recovery. “I think one of the big job functions of a nurse is not just giving clinical care, but making eye contact, being a human touch point,” Smart said. “You don’t want to lose that by putting a robot in the room. But if you did have to put a robot in there, I think it’s really important that the robot fits in with the social signals we do as humans.”

Here are two ways robots are being used to protect people in the U.S. now.

Robot-like technology, backed by a human face, helped provide care for the first patient in the U.S. to be diagnosed with the COVID-19 virus. The 35-year-old man, who had recently returned from Wuhan, China, was treated in late-January at the Providence Regional Health Center in Everett, Washington. Dr. Todd Czartoski, chief medical technology officer for Providence health system, said teams of care providers had been practicing and developing protocols to treat highly infectious patients since the 2014 Ebola outbreak.

The hospital had procured, both internally and from an outside company, carts with high-end audio and visual connections that allowed doctors and nurses to communicate remotely with the first COVID-19 patient and subsequent others. The carts are also equipped with a digital stethoscope and other tools to assist the medical team.

Czartoski says the technology has not replaced in-person care, but it has reduced the number of times the medical staff need to enter patients’ rooms. The change means they could conserve something that’s in short supply around the nation these days: personal protective equipment. “We’ve been able to show, by deploying telehealth devices into these rooms, we could cut the use of personal protective equipment by 50 percent,” Czartoski said.

Prior to the coronavirus outbreak, there had been a big push to reduce the number of hospital-acquired infections that kill tens of thousands of Americans every year.

Several companies around the world, including San Antonio-based Xenex Disinfection Services, have developed ultraviolet light disinfection technologies that are taking on an important new role in keeping health care facilities and other public areas clean during the current crisis.

“I think the trick with robots, with any technology, is picking your battles.”

Xenex’s LightStrike Germ-Zapping Robots, which cost roughly $125,000 per robot and last about five years, use high-powered bursts of broad spectrum UV light to damage the genetic material in pathogens without damaging the surrounding environment and equipment. According to Xenex, an average hospital room takes about 10 minutes for the LightStrike to disinfect.

Dr. Mark Stibich, an epidemiologist who is the co-founder of Xenex, says studies done before the current outbreak showed that in hospitals where the LightStrike is used, “We typically see between a 45-percent reduction in the infection rates, up to 80 percent and better.”

Because ultraviolet light can be damaging to humans, janitorial staff are not in the room when the robot is working and there are automatic shut-off sensors if human movement is detected. During the current outbreak, Stibich says many hospitals are using the robot to disinfect rooms before janitorial staff come in to change sheets and perform other regular cleaning work. The robot is used again a second time before a new patient is admitted to the room.

The LightStrike is currently deployed in more than 500 health care facilities worldwide, including the Mayo Clinic, 70 Veterans Health Administration hospitals and 10 Department of Defense hospitals. Last week, the company announced the LightStrike was recently tested on live SARS-CoV-2 virus at the Texas Biomedical Research Institute, as opposed to surrogate viruses that have been approved by the FDA for disinfection purposes. According to a company press release, the robot destroyed the virus in two minutes.

Left: Tokyo Governor Yuriko Koike inspects a Pepper humanoid robot at a hotel designated to accommodate asymptomatic people and those with light symptoms of the coronavirus disease to free up hospital beds and alleviate work by nurses and staff members in Tokyo on May 1, 2020. Photo by REUTERS/Issei Kato