How Scott Kelly’s year in space changed his poop

In an ambitious attempt to explore what space travel does to the human body, NASA sent astronaut Scott Kelly to the International Space Station to live in orbit for a year. His identical twin, retired astronaut Mark Kelly, remained on Earth’s surface.

To tease out the effects of space travel on a person’s health, researchers across the U.S. proposed an exhaustive battery of tests — the twins provided them with blood and saliva samples, eye sonograms, cheek swabs, cognitive tests and fecal matter.

Yes, that’s poop, and in Scott Kelly’s case, his space poop had a lot to say about life 240 miles above the planet’s surface.

Conducting a fecal study in space is harder than you think.

On Thursday, more than three years since his 2016 return from the ISS, the much-anticipated Twins Study was released in Science, which reported a relatively small but significant change in Scott Kelly’s gut microbiome.

The gut microbiome is the community of bacteria, fungi and viruses that live inside an animal’s intestines and can be detected in their bodily waste. In the past decade or so, the human gut microbiome has been implicated in everything from the obvious — digestion and metabolism — to the unexpected — cancer, Parkinson’s disease and depression.

While Scott Kelly was in orbit, the microbes found in his gut shifted significantly from the kinds that the researchers found on the ground. Within a few months of his return to Earth, this change actually reversed, returning his microbiome to its “normal” state. 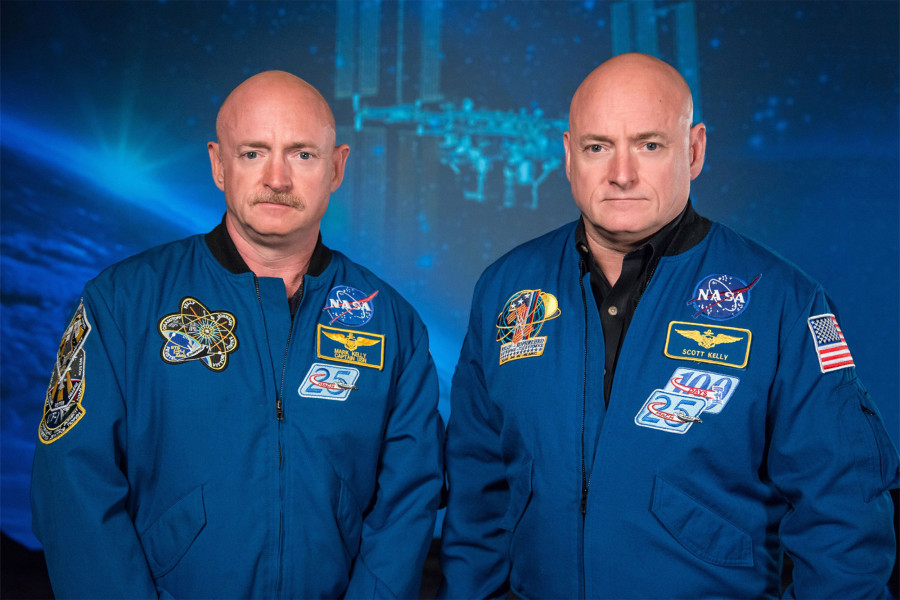 Mark Kelly (left) and Scott Kelly are identical twins. Scott Kelly spent a year in space, while his brother stayed on Earth. Researchers compared the genetic, physical and cognitive changes in the twins to find out how long-term space travel affects humans. Photo by NASA/Robert Markowitz

When you send an astronaut into space, you send his or her microbiome too, said Martha Hotz Vitaterna, a geneticist from Northwestern University and one of the study’s authors: “There will be trillions of cells and millions of genes going along, and they could very much help or hurt how well that astronaut is able to adapt to the stresses of space travel.”

Along with his gut bugs, the changes in how his genes expressed themselves were only temporary. Ninety percent of his genetic levers — including ones in charge of his immune system — returned to normal six months after his return.

Scott Kelly did face a modicum of health peril after a year in space. His cognitive speed and accuracy declined, persisting through six months after he landed. One of his eyeballs swelled slightly and his telomeres, special caps on the ends of his DNA strands, also experienced long-term shortening upon return to Earth — both are phenomena seen generally among space station astronauts. Telomere shortening is strongly correlated with accelerated aging and age-related conditions like cardiovascular disease and cancer.

Overall, NASA views this study as good news so far for their plans of crewed missions to Mars. While a flight to Mars will expose astronauts to more radiation and longer durations of space flight, the researchers said this study is one indication that the flight itself isn’t likely to permanently harm human bodies.

Conducting a fecal study in space is harder than you think.

“We did not ask Mark to eat space food for a year. I would have felt really bad asking him to do that.”

The researchers used cotton swabs to collect small samples from each of the men nine times — twice before Scott Kelly’s flight, four times during and thrice after his return to Earth.

Researchers on the ground had to send rockets up with lab supplies, and fly down little tubes full of poop swabs on multiple occasions. One of the rockets actually exploded en route. And the team had to keep everything frozen until all the samples were collected.

It was important to process all samples at once, said Curtis Huttenhower, a microbiome researcher from the Harvard Chan School, who was not involved in this study.

The computation-heavy technologies used to analyze thousands of species of gut microbes and their millions of genes were all developed in the last decade, and researchers are still honing the methods.

Any slight change in protocol — new swab material, a new technician working with the equipment — could affect the results unpredictably. By examining everything at once, the team kept their procedures exactly the same.

Using a technique called shotgun metagenome sequencing, the researchers “chopped up” the genetic material they found in the two men’s fecal samples. Then, they compared those genetic fragments to libraries of known genes to determine which microbes were present. 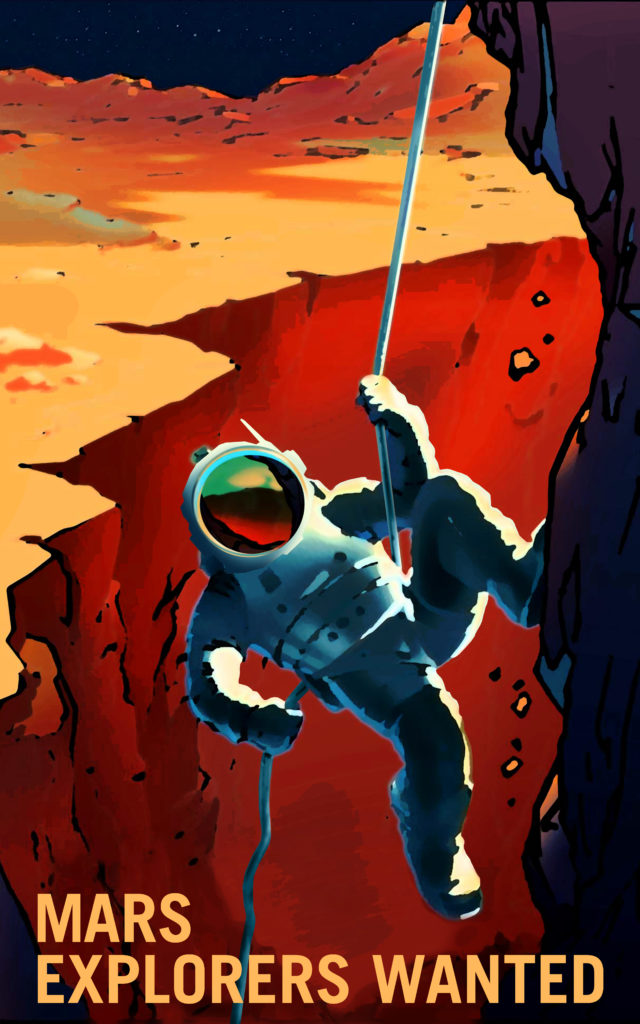 NASA is gearing up for the next phase of space travel: long-term missions to the moon and Mars. Before they send astronauts that far, however, they want to know what medical effects space flight will have. Image by NASA/KSC

After identifying the germs in the poop samples, the team outlined what functions the microbes might play in the gut, such as whether or not they could break down sugars or medications.

Identical twins don’t have the same gut bacteria. Mark and Scott Kelly started from two different baseline communities of microbes, assembled and adjusted throughout their lives to accommodate their life experiences and their choices.

But the researchers weren’t looking for differences in the actual communities between the two men — they used Mark, on Earth, eating normal Earth food, to compare how the limited diet, limited environment, microgravity and general stress of space travel affected Scott’s microbiome over time.

“We did not ask Mark to eat space food for a year. I would have felt really bad asking him to do that,” Vitaterna admitted.

Over the course of Scott Kelly’s flight, the researchers saw changes in his gut microbiome that were not echoed in his brother’s on Earth. Yet all the shifts Scott Kelly experienced during space flight amounted to less than how much a person’s microbiome might change during a course of antibiotics, or a switch from a vegan diet to a carnivorous one.

“We didn’t see evidence of anything that I would characterize as alarming or scary,” such as an enrichment of disease-causing capabilities among the microbes, Vitaterna said. “We also didn’t see a loss of diversity.” 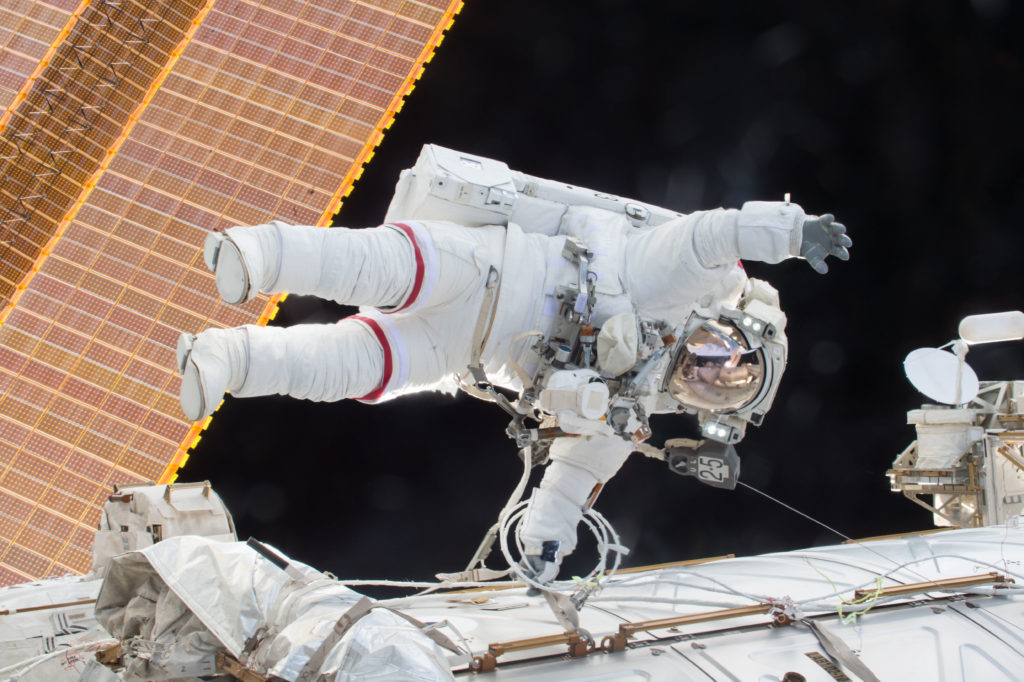 Astronaut Scott Kelly, seen here on a spacewalk outside the International Space Station, was exposed to radiation and microgravity during his year-long mission in orbit. Photo courtesy of NASA

That was a surprise, given Kelly’s limited diet and enclosed environment, but for the researchers it was a welcome sight. “Scott’s microbiome still looked like Scott’s microbiome, just with a space twist on it.”

And within six months after the flight, even the “space twist” was gone. Scott Kelly’s microbes were more or less back to what the researchers measured before his year in orbit.

NASA has performed plenty of experiments on microbes in space before, investigating how microgravity changes microbial behavior and what kinds manage to take hold on the many surfaces of the ISS. “But that does not replicate what’s going on in the mammalian gut,” Vitaterna said. “Thousands of species working together, trillions of cells — you can’t even approximate the level of complexity in a little culture dish.”

According to the scientists involved, this was an unprecedented and unique opportunity to find out if long-term space travel is safe, or even possible.

But the science can’t stop here.

The researchers agree that this single study involving just one person in space isn’t enough to conclusively give a thumbs-up to anyone hoping to send a crewed mission to Mars.

Left: Astronaut Scott Kelly spent a year in space. Researchers put him through a barrage of tests to find out what extended space travel does to a human body. Photo courtesy of NASA/Scott Kelly