From a human perspective, the clear, calm waters of Michigan’s lakes — surrounded by trees, filled with fish, reflecting the sky — could hardly be more peaceful.

For the tiny critters below the surface, it’s a life-or-death battlefield. “Water fleas” dart from place to place, collecting food, dodging predators and fighting diseases.

University of Michigan ecologist Meghan Duffy is obsessed with water fleas, or Daphnia, as they’re also called. She’s been catching, inspecting and photographing these sesame seed-sized crustaceans for about two decades.

Daphnia fascinate her because their voracious appetites for algae, yeasts and bacteria keep freshwater clean — in ponds, puddles and the aforementioned lakes — on every continent but Antarctica. Humans rely on these water fleas to maintain ecological balance, filter healthy waterways and act as a food source for amphibians, insects and fish.

As a consequence of their diets, Daphnia harness natural compounds that fight fungal infections and may someday serve as anti-fungal medicines for wildlife, crops and people.

These potential Daphnia-based medications are noteworthy given 1.5 million people die from fungal diseases each year. (For comparison, that is three times the number that die from breast cancer around the world.) Infections racing through a pond killing Daphnia can also serve as a model for studying deadly human diseases, like anthrax.

Daphnia bodies are transparent, but their combat tactics against major diseases are still opaque to researchers, and figuring out what’s happening could hold vital clues for human health.

So, Duffy’s work delves deep into freshwater muck, teasing out the secrets of the miniature world teeming below the water’s surface — the more complicated the problem, the better. That mentality carries over into her work outside of the lab, as a mentor and advocate for inclusivity.

Here’s what life is like for Meghan Duffy and her pursuit of Daphnia.

How does someone study tiny transparent pond fleas?

From mid-July to mid-November each year, Duffy’s students can often be found paddling around in Michigan’s many lakes.

In flat-bottomed rowboats, they lower plankton nets — cone-shaped devices made out of a fine mesh — down into the depths of the lake and haul them back up, dripping lake water and trapping anything small and swimming. Those samples are bottled and brought back to the lab. 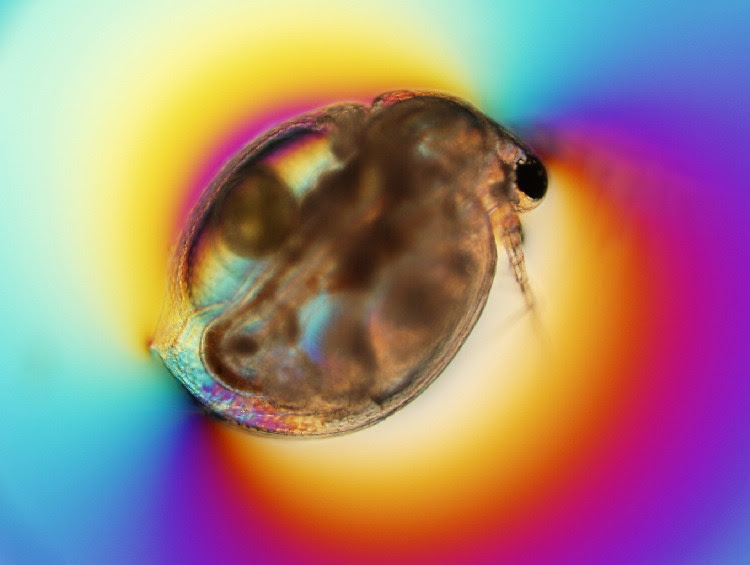 Daphnia under a microscope can bend light, creating psychedelic patterns that Meghan Duffy loves to capture on camera. Image courtesy of Meghan Duffy

There, Duffy and her students count and inspect the Daphnia they’ve collected. Duffy likes to get them under a microscope, in part because she wants to search their transparent bodies for signs of bacteria or fungus. Even though Daphnia only have one eye and two protruding antennae, according to Duffy, “they’re also just really beautiful to look at.”

Why does Duffy’s research matter?

Duffy’s work used to focus more on the spread of diseases through groups of Daphnia in Michigan lakes, but recently her work has taken another turn.

With doctoral candidate Kristel Sánchez, Duffy realized that Daphnia plagued by fungal infections could avoid the disease if they ate the more toxic cyanobacteria, rather than their usually preferred and more nutritious algae.

It’s unclear if Daphnia themselves are using cyanobacteria as “medication,” but the researchers do know that the tiny creatures have pointed the way toward a chemical compound — called microcystin — that might one day help protect humans, crops like coffee, rice and wheat and wildlife including amphibians, snakes and bats. 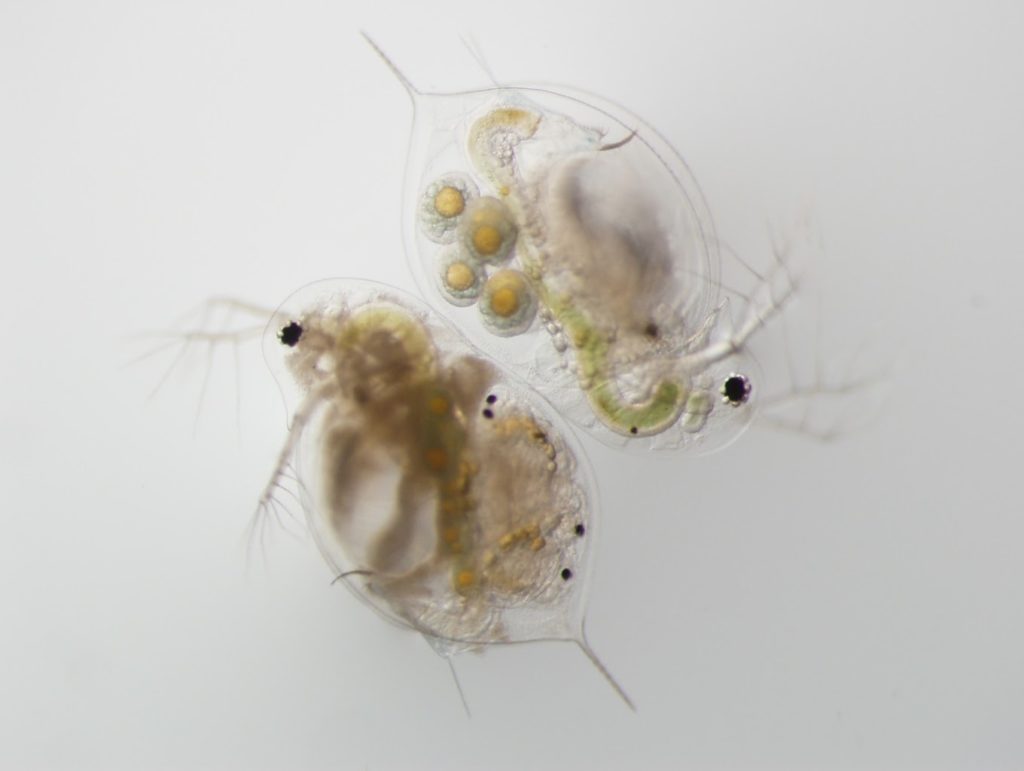 Healthy Daphnia, like the animal in the upper right of this image, are transparent and carry eggs. The Daphnia on the lower left is clouded with fungus. Image courtesy of the Duffy Lab

There’s a long road from identifying a potential antifungal chemical to developing a safe and effective drug that people and wildlife can use. But the search for new drugs is a pressing one, as fungi are becoming more resistant to what’s currently available in hospitals and medicine cabinets.

Recently, the Centers for Disease Control and Prevention listed a tenacious fungus called Candida auris as a “serious global health threat,” and one that might not be responsive to the fungus-fighting medications we currently use. Daphnia could be one key to shaping remedies that help humans keep up the fight.

Life outside the Daphnia lab

At this stage in her career, Duffy said she spends less and less time at the microscope or in the field. Instead, she teaches Michigan’s introductory ecology course, mentors students, works on grants or edits papers.

She is also launching a project to address graduate student mental health.

Scientists who get to lead their own labs often reach a point when they are less directly involved in research, Duffy said. To those who live for fieldwork, leaving it can feel like a tragedy. To Duffy, though, it’s a sign of prosperity and a good work-life balance. “I love doing field work,” Duffy said, “but I don’t love it enough to take time away from my family to do it.”

That’s not to say her schedule is easy. Duffy must make sure her lab of nearly 20 people, which she said is unusually large for an ecology group, stays funded and functional. She takes her mentorship responsibilities seriously, too. She coaches students in public speaking, salary negotiations and scientific presentations, while also editing grant and fellowship applications.

She is also launching a project to address graduate student mental health. Grad students face stressful exams and navigate collaborative relationships with their advisors, all while conducting their own research — maybe for the first time. This new task force, she said, will stop putting the focus on “self care” and grad student behavior, and consider the underlying issues that make academia stressful for all students, especially underrepresented minorities.

“There’s a difference between it being challenging and rigorous, and being difficult for no reason,” Duffy said.

Duffy often writes on Twitter about inclusivity and how it — or its absence — shapes science and academia. Simple things, Duffy said, can scare students away from the sciences — a few large exams that control their grades, for example. Duffy tries to diversify her grading, adding smaller quizzes to check in on students throughout the term. She also works to change up her classroom examples.

“We have a tendency to feature old dead white guys,” she said, “but I can feature more diverse scientists, and talk about newer work.”

But advocating for inclusivity can be a double-edged sword for women and minorities, who often bear the burden of mentorship and institutional change. Women and other academic minorities are more likely than others to spend volunteer time on committees, for example, or dedicate energy to

That kind of “invisible service” takes time and effort, but is often overlooked by tenure committees who have the power to offer — or not offer — permanent positions at universities.

It’s appealing for a scientist to pick apart how one small change might throw off the balance of a whole lake full of Daphnia and Daphnia parasites. It’s less fun to pick at the morass of responsibilities and choices of being a tenured professor while balancing family life, teaching, mentoring and cutting-edge research.

“In ecology, a key part is grappling with complexity,” Duffy said. “It’s counterintuitive. But once you figure it out, it’s incredibly satisfying.”

Left: Water fleas, also known as Daphnia, fight tiny battles in our lakes, puddles and ponds. Their secrets could help us unlock new medicines and save lives.

Antarctic penguins have existed for 60 million years. Can they survive climate change?