How universities are developing COVID-19 solutions in real time

Dorms are empty and classroom lights are off at the vast majority of America’s colleges and universities, but that hasn’t stopped many in academia from jumping in to help try to meet the massive need for innovative treatments, vaccines, personal protection equipment (PPE) and medical devices in the wake of the novel coronavirus pandemic.

Engineers, doctors, scientists, researchers and college students across the country have quickly shifted gears and are applying their skills and knowledge to fighting the virus, which has infected more than a million people around the globe. The federal government and most states with stay-at-home orders have designated researchers focused on the outbreak as “essential critical infrastructure workers,” allowing them to continue working in labs and offices.

A number of schools, including Rice University, the University of Texas, the University of Illinois, and the University of Vermont, have been working on new ventilator designs, a critical need with shortages at many hospitals around the country. Faculty from the University of South Carolina, in collaboration with the medical nonprofit Prisma Health, developed an FDA-approved 3D- printed splitter device called the VESper that can treat two patients on one ventilator. And a team at University of California, Berkeley has modified sleep apnea machines so they can provide respiratory support for noncritical COVID-19 patients.

Given the rapid pace of innovation and, in some cases, the short time from inventor’s bench to hospital room, ensuring that devices are safe and reliable is a key issue for those on the front lines.

“Researchers at academic institutions, non-traditional manufacturers, communities of makers, and individuals are banding together to support and fill local and national needs,” an FDA spokesperson wrote in a statement to the PBS NewsHour. “The goal [of the FDA] is to enable and empower people to make a positive impact in the ways they are able, while ensuring their efforts and outputs are safe.”

The FDA’s Center for Devices and Radiological Health — the government agency tasked with regulating firms who manufacture medical devices sold in the U.S. — is using Emergency Use Authorizations (EUAs) to determine “if it is reasonable to believe that the [products] may be effective and that the known and potential benefits outweigh the known and potential risks.” The FDA declined to disclose the number of EUA requests it has received in response to the COVID-19.

Here are three more ways universities are contributing to the global virus response.

In the dash to prevent needless deaths, some scientists have postponed or abandoned long-term projects to engage in new coronavirus work. Others, like Matt Whitehill, who is pursuing a doctorate at the University of Washington, have sped up existing projects that might eventually prove helpful. Whitehill and a team of fellow computer scientists and electrical engineering students, along with collaborators at Seattle Children’s Hospital and U.W. Medical Center, are working on a cough-detection app for smart mobile devices.

Cough-detection research at UW began in 2011. Different teams have chased the technology over the years, but Whitehill says there is now a sense of urgency to deploy it. “The COVID-19 outbreak has really expedited some of our timelines because there is such a large need for this technology,” Whitehill said.

The goal of the technology, part of a move toward remote patient monitoring (RPM) in health care, is to assist both patients and their medical providers monitor coughing while someone is recovering at home from COVID-19 or other diseases that cause coughing symptoms. The app relies on an algorithm Whitehill and his colleagues developed that can detect cough sounds amid other background noises such as conversations; those coughs are then recorded in the app or the device, and can be kept private or shared with others, including health care providers.

Whitehill says as health care facilities become overwhelmed, some patients are being sent home who would normally recover in the hospital. “Health care providers or community organizations may want to have some insight into how those patients are doing when they go home,” Whitehill said. “Automated remote monitoring allows us to get an insight into whether that patient’s health condition is improving or deteriorating in an objectively reliable, real time way without needing to make contact with the subjects.”

Other groups are also working on cough-detecting technology, but Whitehill says UW’s app is unique because it’s aimed at providing a high level of accuracy and protecting user privacy. Only cough counts are recorded and the data is analyzed on the phone instead of a remote server. The research team is currently seeking volunteers to help improve the app by submitting cough sounds and other vocalizations.

The technology can only monitor cough counts, but Whitehill says eventually he hopes to be able to discriminate between cough types — e.g. wet or dry. Because COVID-19 is associated with a dry cough, that kind of information could potentially help health care providers more accurately monitor the condition of COVID-19 patients.

Universities are also joining a number of companies and individual volunteers around the country who are developing new solutions for creating and ramping up production of PPE. Northwestern University, MIT, University of the New Hampshire and Michigan State University are among a number of schools that have started 3D-printed face shield projects.

Stanford University bioengineering associate professor Manu Prakash, whose work has long-focused on innovative, low-cost medical devices, is taking a different approach. In early March, he returned from a trip to Europe, where, he said, he had seen how the coronavirus was taking a toll. Prakash then started an open source project to modify full-face snorkel masks into reusable PPE for health care workers. 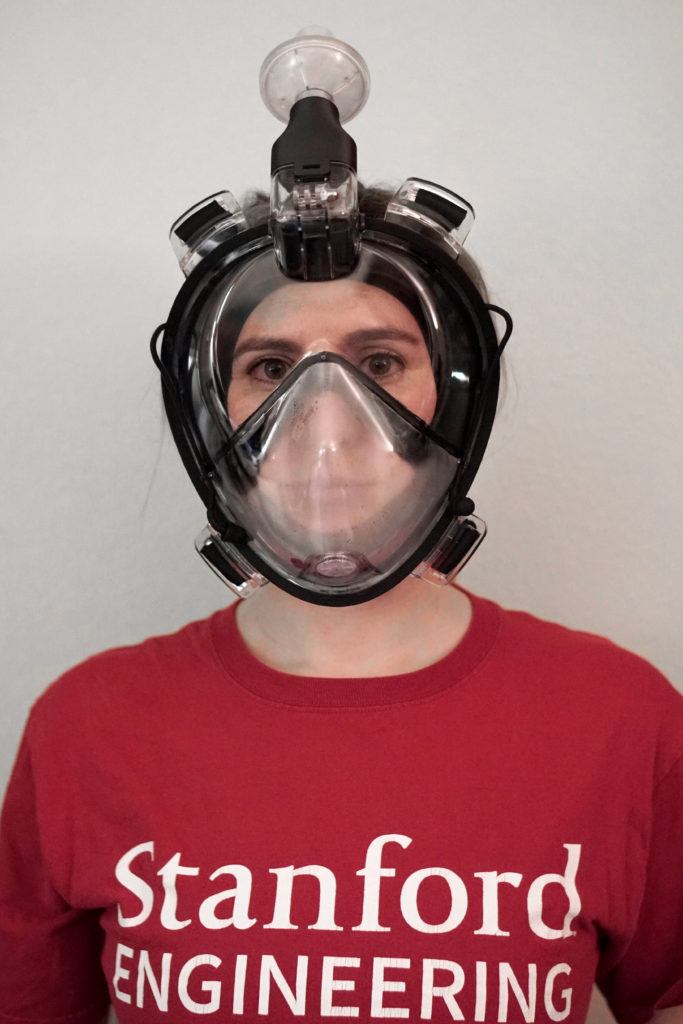 “I was highly concerned about what was going to happen in the PPE context in the U.S.,” Prakash said. “I love diving and I have had a snorkel mask for a long while. So that was the starting point.”

Working with a number of collaborators, including Boston Scientific, Medtronics and the University of Utah, Prakash’s team developed a 3D-printed filter and injection molded attachment that can be connected to the mask’s air-intake tube, which is aimed back and away from the face. In their initial design, the team used FDA-approved medical-grade filters that are used in various applications around hospitals but not currently for PPE; recently they’ve begun testing other types of filtration systems, including HEPA filters used for industrial purposes.

“It’s a very technical challenge because you’re talking about [containing] aerosolized droplets that are 300 nanometers (0.3 microns) or smaller,” said Prakash, referring to the imperceptible spray of saliva that can come out of someone’s mouth or nose. “Frugal science in this context is about coming up with ways to do things quickly, but still having the highest level of safety standards. You have to be extremely serious about really looking critically at the sets of solutions.”

“Everyone has a shot of making a contribution, and universities are often where it starts.”

In addition to cost, one of the key goals of the project is to ensure the modified snorkel-masks can be reused multiple times safely. Prakash says in the past, more medical products, like elastomeric respirators, were made to be reused over and over again with proper cleaning and decontamination. But our “disposable culture” has led to more single-use products like N95 masks, and now medical professionals are confronted with the fact that there just aren’t enough disposable supplies to go around.

The research team has been submerging the masks in solutions of bleach and exposing them to heat, among other approved sterilization methods. Prakash says testing has shown the masks survive common decontamination protocols.

The masks, which have been submitted to the FDA for emergency use authorization, are currently undergoing clinical testing in three hospitals. The team is also shipping 100 more to clinicians for pilot testing and another 1,000 to health care workers around the country who are in urgent need.

The innovation that arguably could have the largest influence on the global COVID-19 response is the development of a vaccine. Of the nearly 80 vaccine candidates now in the works, most are being developed from pharmaceutical companies in the U.S. and abroad. But researchers in academia are also involved in the effort, often building on previous vaccine research. That’s the case for a team at the University of Pittsburgh School of Medicine that worked on vaccines for SARS in 2003 and MERS in 2014; both viruses are closely related to the current coronavirus. Earlier this month, they announced an early-stage vaccine candidate called PittCoVacc in a peer-reviewed paper published by The Lancet. The team is also testing an innovative delivery system for that vaccine: a small patch made with 400 tiny needles made out of dissolvable sugars which are saturated with the vaccine. 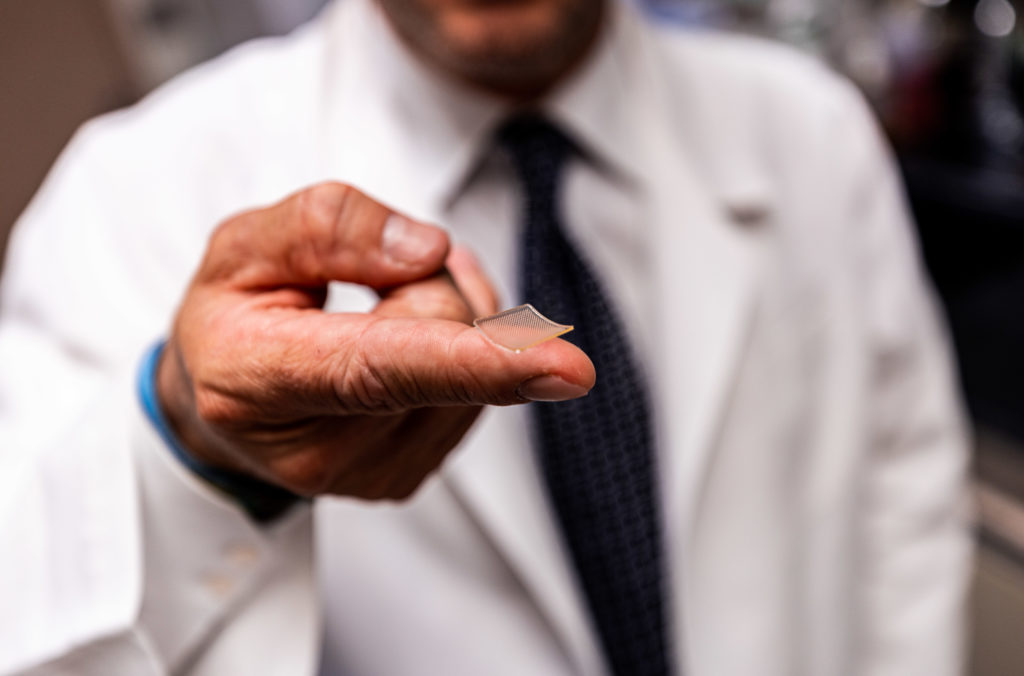 Andrea Gambotto, M.D., associate professor of surgery at Pitt, holds a COVID-19 microneedle array vaccine on his fingertip. The 400 tiny antigen-tipped needles poke into the skin to stimulate antibody generation. Photo by UPMC

Dr. Louis Falo, who developed the patch, says one of the benefits of the technology is it doesn’t have to be refrigerated. “Most vaccines have to be refrigerated from when they’re made, all the way until they are in the patient,” Falo said. “For underdeveloped countries and global vaccination programs, that’s an obstacle. It’s really expensive and some places aren’t even equipped with refrigeration. The patches are very stable at room temperature and I think that’s a big plus.”

Harvard University public health professor Dr. Barry Bloom, who is not involved in current vaccine research but has been tracking developments, cautions against latching on to any one vaccine candidate or delivery system at this point.

But he says increased collaboration and the speed at which results are now being shared in the scientific world is unprecedented. “The diversity of vaccine candidates and other innovations is really exciting,” said Dr. Bloom. “Everyone has a shot of making a contribution, and universities are often where it starts.”

Left: The innovation that arguably could have the largest influence on the global COVID-19 response is the development of a vaccine. In April, a team at the University of Pittsburgh School of Medicine announced an early-stage vaccine candidate. Photo by UPMC