Can’t resist candy? You may have this mutation

Believe it or not, some people don’t like candy. (Writer raises hand.) These people have been known to balk when friends offer jellybeans or leave the room as co-workers paw at the annual bowl of Halloween candy corn. If you’re one of these candy deniers, you may want to blame your hormones — or at least, a hormone made by the liver called FGF21.

This hormone controls your sweet tooth, according to a study published May 2 in the journal Cell Metabolism, making some folks much more likely to snack on candy and sweets, such as gum drops, ice cream, milk chocolate, Sweet Tarts and Skittles.

“It’s really specific to sweet tooth,” said Matthew Gillum, a metabolism researcher at the University of Copenhagen’s Novo Nordisk Foundation Center for Basic Metabolic Research who co-led the study. “We don’t see an effect on intake of complex carbs,” namely their preferences for fatty-sweets (cakes and pastries) and salty treats are just like everyone else’s.

While the neuroscience behind what drives overall hunger is well-understood, surprisingly little is known about why our brains and bodies gravitate toward specific foods.

While the neuroscience behind what drives overall hunger is well-understood, surprisingly little is known about why our brains and bodies gravitate toward specific foods. Parents pass along food preferences for fruits and veggies or meat, to their kids. But scientists like Gillum want to know why people make those decisions.

FGF21 had cropped up in the scientific world of sugar consumption in the past. Boosting FGF21 hormone levels in lab rodents or non-human primates triggers an aversion to sugar and artificial sweeteners, but not to proteins, fats or overall food intake.

Meanwhile, genome-wide association studies — which look at human mutations and how they correlate with health behaviors — pinpointed two genetic tweaks in the FGF21 gene that associated with increased carbohydrate consumption. But these prior studies did not quantify how much extra sugar was consumed by these individuals.

So to explore how these FGF21 mutations influence the day-to-day diets of humans, Gillum and his colleagues examined the genetic profiles of subjects from the Inter99 study — a huge survey in Denmark that tracked the cardiovascular health of 13,000 random adults between the ages of 30 and 60. From 1999 to 2006, subjects filled out questionnaires about their daily diets, while doctors collected blood samples to track things like cholesterol and insulin levels. A subset of 6,500 individuals volunteered their blood samples for future genetic analysis, such as by teams like Gillum’s.

Gillum and company found people from the Inter99 study who had one of the two FGF21 mutations were 20 percent more likely to consume candy and sweets on a day-to-day basis.

“It’s a small change in behavior — about 3 grams in added sugar consumption per day,” Gillum said. “It doesn’t seem to do anything to your bodyweight. The effect on BMI [body mass index] is not large.” 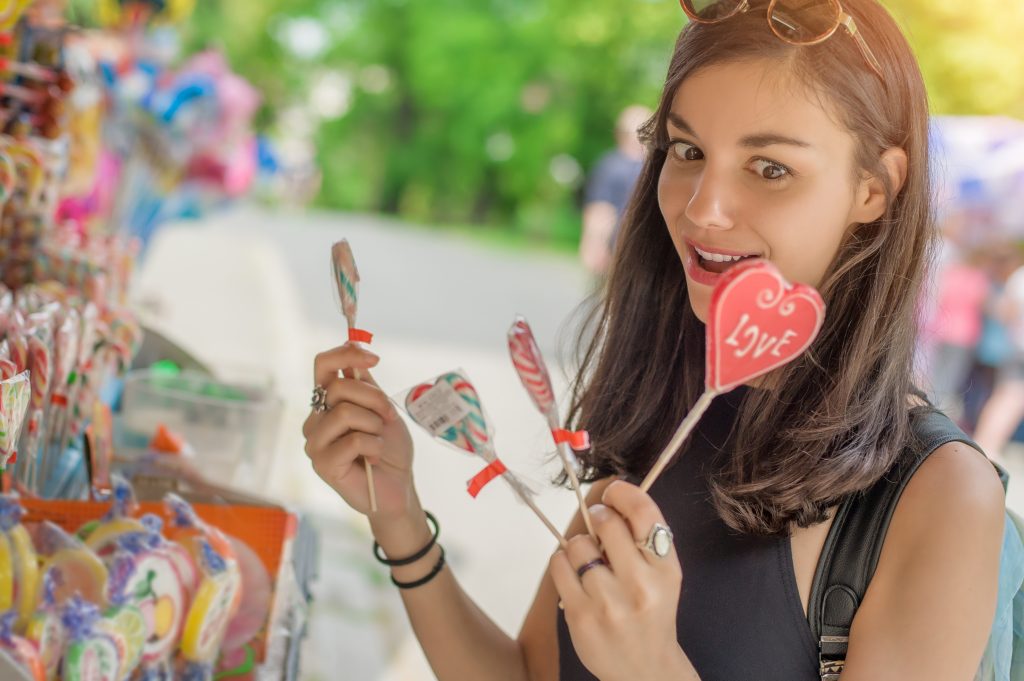 “Liking sweets is a somewhat addictive behavior,” said Terry Maratos-Flier, a professor of medicine at Harvard University who studies how diet alters the programming of our minds and bodies. Photo by Sarah Lawrence/via Getty Images

Going further, the team recruited a separate group of 100 college students and asked if they liked or disliked sweets. Those with the strongest preferences for sweets had 50 percent less FGF21 circulating in their blood.

Stated otherwise, FGF21 hormone acts like a brake. If you have lower levels of it or if your version is mutated, then you tend to consume more sugar.

Though FGF21 levels did not correlate with obesity in this random selection, it may still influence weight gain through its ability to temper cravings.

“The surprising takeaway is that appetite might be regulated by the liver, which isn’t thought to be a hormonal regulator of feeding behavior.”

“Liking sweets is a somewhat addictive behavior,” said Terry Maratos-Flier, a professor of medicine at Harvard University who studies how diet alters the programming of our minds and bodies. “It’s a motivation behavior. You get a lot of pleasure out of it.”

Maratos-Flier, who wasn’t involved with Gillum’s research, found it interesting that people with FGF21 mutations who liked sweets were more likely to drink alcohol and smoke. Prior work has shown genetics tweaks to FGF21 pathways increase alcohol intake in mice and humans.

“It suggests that FGF21 might fit into these highly motivated behaviors,” Maratos-Flier said, adding that the hormone may push multiple hedonic behaviors. Gillum’s group plans to dig into the alcohol question in the immediate future.

Meanwhile, a clinical trial conducted by Pfizer found a drug that mimics FGF21 can reduce body weight in Type 2 diabetes patients by lowering their food intake. But many metabolic pathways influence diet choices, and likely sugar consumption too, so both Gillum and Maratos-Flier said more research is needed to clarify how FGF21 factors into disorders like obesity.

“The surprising takeaway is that appetite might be regulated by the liver, which isn’t thought to be a hormonal regulator of feeding behavior,” Gillum said. But right now, “we think these natural rewards may just be going through the same craving pathway that sugar does.”

Left: Love candy? Well then, your liver may make relatively less of a hormone called FGF21, according to a new study. Photo by Carl Court/Getty Images