An experimental helicopter that accompanied Perseverance, NASA’s latest Mars rover, on its recent journey to our celestial neighbor successfully pulled off the first ever powered, controlled flight on another planet Monday.

This small, lightweight aircraft, dubbed Ingenuity, flew for a total of nearly 40 seconds before safely landing back on the surface of Mars. Over the next few days, researchers will continue to analyze data that was collected during that flight and prepare for a second one that’s scheduled for “no earlier than April 22,” according to NASA.

NASA initially delayed Ingenuity’s first flight — which was originally scheduled for April 11 — in light of an error that occurred during a test of the helicopter’s operations on April 9.

The little rotorcraft that could.🚁💨

Ingenuity documented its historic ascent today. Here's the #MarsHelicopter's POV during first flight. That's its shadow on the ground below. pic.twitter.com/wXgLyTDbjm

Taking flight on Mars is no simple feat. The planet’s gravity is about a third of what we experience on Earth, and temperatures there fluctuate dramatically — a good portion of the helicopter’s solar-powered energy goes toward keeping it warm enough to survive extremely cold nights.

The atmospheric pressure on Mars is also about one-hundredth of that at sea level on Earth. “To put it in perspective, it would be like flying at [around] 100,000 feet on Earth,” Josh Ravich, Ingenuity’s mechanical engineering lead, said. “At that low pressure, it’s very hard to generate lift.”

Håvard Grip, Ingenuity’s chief pilot, told the PBS NewsHour via email that the Red Planet essentially has “a lot less air” for an aircraft “to bite into and push against” in order to take flight. 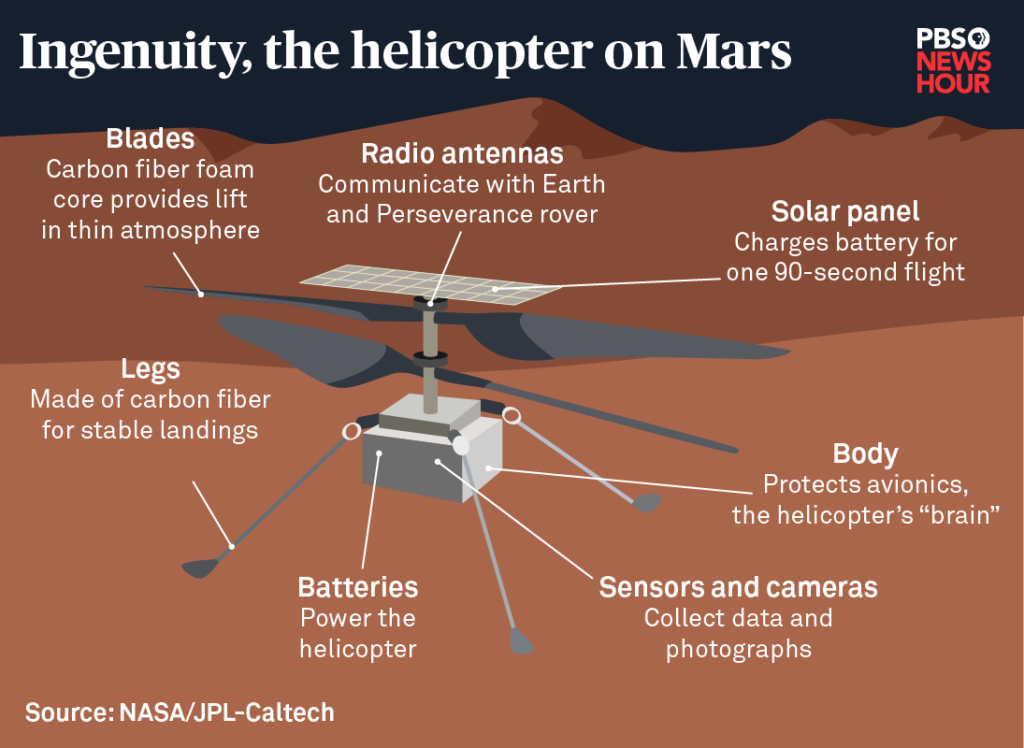 Much like the Perseverance rover, which was outfitted with an aluminum plate dedicated to healthcare workers who have worked to save lives during the coronavirus pandemic, Ingenuity features an easter egg of its own: a tiny piece from the original Wright Brothers’ Flyer — which flew over a century ago — that’s tucked underneath the helicopter’s solar array as an ode to the first time humans ever pulled off controlled flight here on Earth. 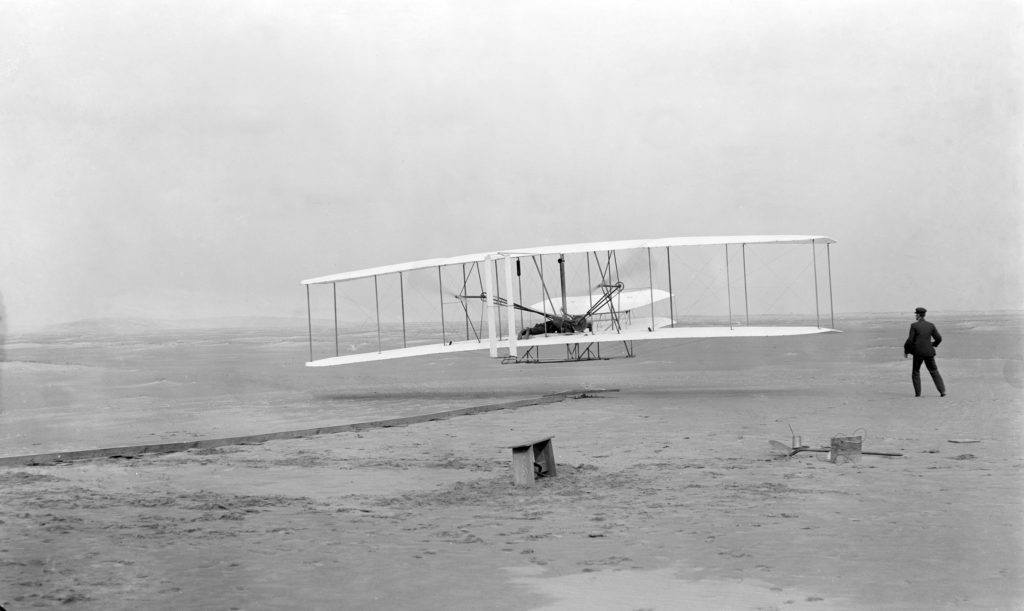 This image, taken December 17, 1903, captured the first successful controlled flight of the Wright Brothers’ flyer. A small piece of material from one of the flyer’s wings is attached underneath Ingenuity’s solar array. If successful, the helicopter will mark another technological first: the inaugural controlled flight of an aircraft on another planet. Photo courtesy Wikimedia Commons.

Even prior to Monday’s historic experiment, Ingenuity pulled off a series of impressive accomplishments after surviving its initial trip to Mars alongside Perseverance and managing to function on its own in the unforgiving Martian environment.

You wouldn’t believe what I just saw.

All of the information collected during the helicopter’s first flight — like how well its blades performed, visual navigation and solar array performed, or how much lift it was able to generate — will be used to inform later missions.

Similar aircraft could one day be used to carry out a range of useful tasks, like carrying payloads across Mars, investigating hard-to-reach places that existing technologies can’t readily access and supporting future robotic or human exploration on the planet, Ravich said.