We live on a small rocky planet that orbits a yellow dwarf star located about halfway down a minor arm of the Milky Way galaxy — a mass of hundreds of millions of stars that forms a spiral that measures more than 200,000 light-years across.

On a dark clear night on our planet, we can look up and see some of those stars, brightening the sky like a glass of milk spilled out across the universe. That’s our view of what we’ve long assumed to be a relatively flat disk-shaped galaxy.

It’s one of the most amazing things that you can see by human eyes.

But for the past few decades, some researchers have claimed our Milky Way galaxy isn’t a flat, spiral disk. Instead, they say it’s warped into an s-shape, like a melted Frisbee or a pancake mid-flip.

Now two studies, one published in February in Nature Astronomy and the other, this week in Science, confirm that our galaxy has a distinctive snaky curvature thanks to new 3D maps of the Milky Way.

These maps bring us a better understanding of our corner of the universe, said Licai Deng, an astronomer from the National Astronomical Observatories of the Chinese Academy of Science who worked on the February paper.

“It’s one of the most amazing things that you can see by human eyes,” Deng said. But on top of that, he added, it could help us understand how galaxies across the universe form and interact. 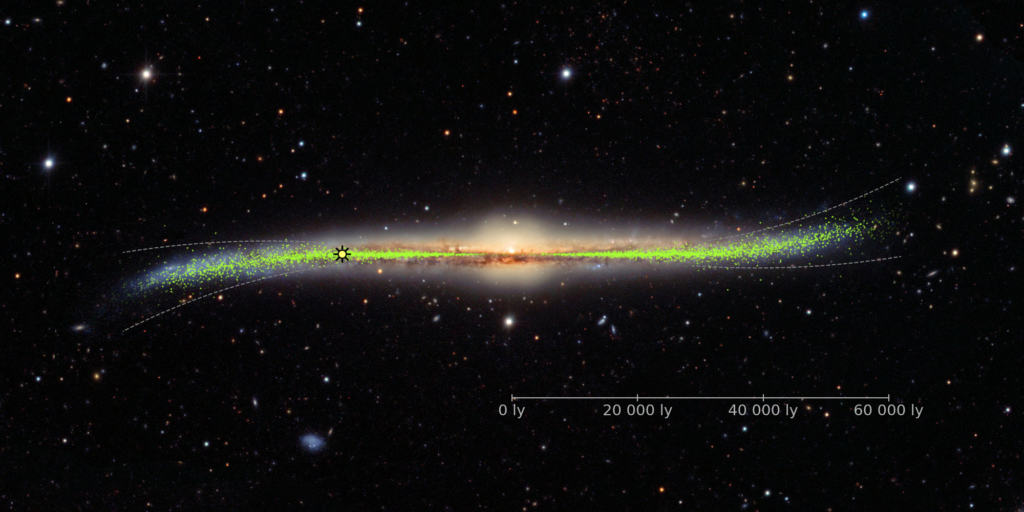 Without context, it’s difficult to measure distances in space.

That’s where “Cepheid variable stars” come in, said Dorota Skowron, an astronomer from the University of Warsaw and the lead author of the new paper in Science.

The relationship between the timing of the pulses and the intrinsic brightness of Cepheid stars was discovered more than a hundred years ago by an American astronomer named Henrietta Leavitt. Her calculations later helped astronomers like Edwin Hubble determine that there are galaxies outside our own and that the universe is expanding.

During her life, her work was mostly unappreciated — she was paid 25 cents per hour to work full-time at the Harvard College Observatory, where her work was often published under male colleagues’ names.

Now, her legacy lives on in academic papers that cite the Leavitt Law, a

Classical Cepheids are supergiant stars, more than 100 to 100,000 times as bright as our sun. Their starlight pulses at an even rate. The tempo of that pulse can be related to how much light the star actually produces.

Basically, if you can measure the pace of a Cepheid star’s cycle of pulses — brighter and dimmer periods — you can figure out how much energy the star is going through and therefore, how bright the star truly is. Then, you can measure how bright it appears from Earth or a nearby telescope and calculate how far away it must be.

Astronomers have used Cepheids as classic measures of distance for about a century. The farther away the star is, the dimmer it should appear to telescopes on Earth.

Both papers use Cepheids to map the galaxy, but used different instruments to detect and categorize the stars.

Skowron’s sample, she said via email, was drawn from six years of work and 206,726 images of the sky containing more than a million individual stars, leading to a whopping 153,704,543,662 individual observations.

In the end, her team’s maps are based on a sample of 2,431 Cepheid stars mostly compiled from the Optical Gravitational Lensing Experiment (conveniently shortened to OGLE) based at the Las Campanas Observatory, Chile.

The other paper, led by Xiaodian Chen of the Chinese Academy of Sciences, used a sample of 1,339 Cepheid stars drawn from NASA’s Wide-field Infrared Survey Explorer (WISE) telescope, which surveyed the universe from Earth’s orbit.

Over the course of days or even months, Cepheid stars grow brighter and dimmer in regular cycles. The longer the cycle, the more light the star is actually producing, so by measuring the tempo of a Cepheid variable star, astronomers can understand how far away that star is. Image by Przemek Mróz / OGLE

“The warp of our galaxy is quite substantial in comparison with others,” Skowron stated. But it’s not unique, she said, since prior studies estimate that half of all galaxies in the universe have some detectable warping. 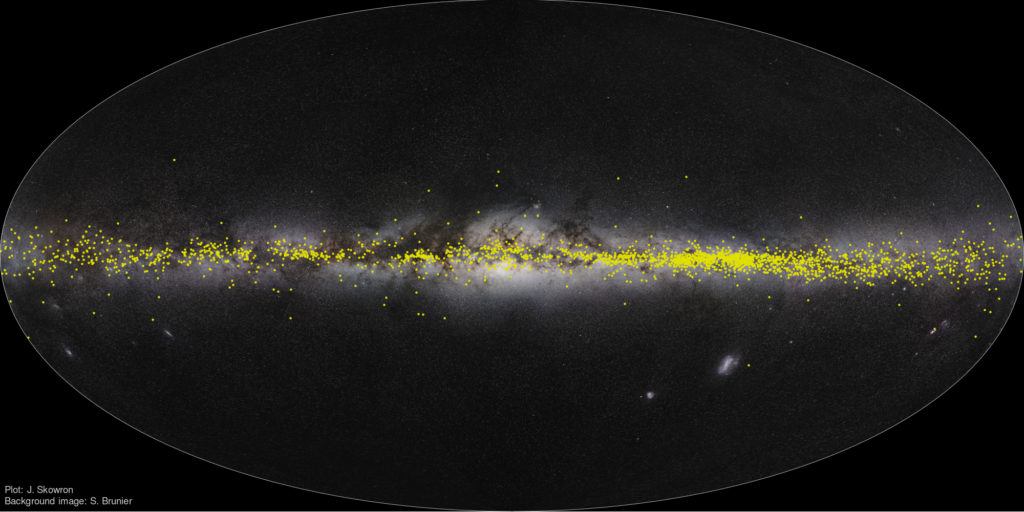 Cepheid stars plotted out across a panorama of the Milky Way. Plot by J. Skowron / OGLE, The Milky Way panorama by Serge Brunier

Skowron thinks that the twisted shape could reveal past gravitational interactions or collisions with other galaxies, or possibly the presence of dark matter tugging on the edges of the Milky Way.

Deng and the team on the Nature Astronomy paper argue that the asymmetry could be caused by gravitational forces from the inner and outer parts of the Milky Way disk affecting each other, too.

The researchers have a healthy spirit of competition — Deng argued that their warp calculations had a higher degree of precision, while Skowron pointed out that her galactic map comes from a larger set of Cepheid stars. Each team, Deng reported, would have preferred that the other cite their competitors in their published work.

“But it’s great that the results are the same,” Deng said.

Left: The Milky Way over the Warsaw Telescope. Cepheid stars found by OGLE and used to determine the galaxy's warped shape are shown as yellow dots in the sky. Image by K. Ulaczyk / J. Skowron / OGLE