School Shooter: ‘My Grand Plan Was Suicide by Cop’

On March 5, 2001, 15-year-old Andy Williams walked onto the Santana High School campus with a loaded .22-caliber revolver taken from his father’s locked gun cabinet and opened fire, killing two schoolmates and wounding 13 others.

Now 27, he resides at Ironwood State Prison, a correctional facility in the middle of the California desert. He will face his first parole hearing at age 65.

Not long ago, NewsHour science correspondent Miles O’Brien had a phone conversation with Williams, who called him collect from the prison.  Parts of that  conversation will be included in a broadcast report on Wednesday’s PBS NewsHour and on the hour-long documentary, “Mind of a Rampage Killer” to air the same evening on PBS’s NOVA.

The audio beeps and automated voice heard in the interview are due to the call being monitored and recorded by the prison.

Below are extended video excerpts from their conversation and the complete transcript.

MILES O’BRIEN: I know we have a limited amount of time, so we’ll cut right to it.  We are talking to a lot of people about what goes on in the mind of somebody who does a rampage killing, a rampage shooting.  You’ve had now 12 years to think about it. Take us back to that moment, and if you could tell us what had gone one in your mind at the time that would really help us.

ANDY WILLIAMS: Umm.  Even now, being so far removed from everything, it’s like, there’s, there’s really like no, like, coherent, like, thought process at the time.  I mean I can only speak for myself. I can’t really, I can’t  give you any insights to all the people that like, went out, and and did all these mass shootings, because at least in my mind it’s not really the same thing. To me it was just like a numbness at the time.  You know what I mean, and like I couldn’t really, at [age]15, I couldn’t really comprehend like the consequences. Or I knew what I was doing was wrong but I couldn’t really comprehend, like, the finality of like, of the wrongness that there was gonna be some severe and lifelong consequences to everything I was doing.

MILES: Was it the bullying?

ANDY: Yeah, that played a part in it, yeah.

MILES: Did you feel suicidal?

MILES: Tell me a little more about that.  What do you recall when you first thought about ending your own life?

ANDY: I mean yeah it was, it was like an eight-month constant, like, I wonder if things would be better if, you know what I mean, like, if I wasn’t, I wasn’t, like, in this city, in this state, or even on this earth.

MILES: So you thought the cops would come shoot you, and for whatever reason that didn’t happen. In a way, was that kind of disappointing?

ANDY: Um, no.  Not necessarily disappointing.  I mean now it’s a bummer because, like, that was – that was my – that was my brilliant 15-year-old plan and that didn’t really work out, but like now, the two people that bare the brunt of what I did, like you know what like – they had nothing to do with what’s going on. I didn’t – I didn’t really factor, like the severity of what I was doing into my decision because I didn’t think, I didn’t really think like all that stuff through.  I didn’t think two boys were gonna die.  I didn’t think 13 people were going to get shot.  I just thought I was gonna make a lot of noise and that the cops were gonna show up. 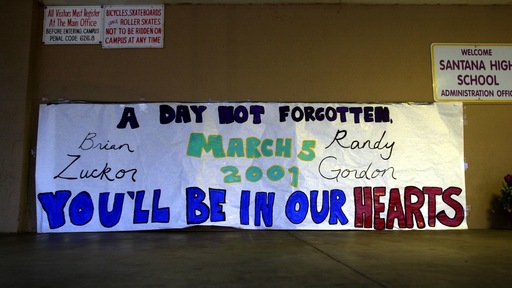 MILES: But you really, you wanted to improve your status at school in a way without hurting anybody.  Is that what you wanted?

ANDY: Not necessarily improve my status, I just wanted, I wanted to like get away from everybody and not like, not, not be there anymore.

MILES: Can you tell me a little bit more? When you say you were in pain, what do you mean?

ANDY: I was addicted to drugs at the time, like the bullying was going on there, some, there was some abuse at like, with like, at the hands of my buddy’s stepdad.  There was, there was a lot of stuff going on for me to try to process, frankly.

MILES: You said you were addicted to drugs…marijuana?

MILES: It was pot.  I was drinking a lot, and my buddy’s mom had, had Lyme disease, so we used to steal her painkillers.

MILES: Oh, so you had painkillers, pot and booze.  What kind of, what were you drinking?

ANDY: Whatever we could get.

MILES: Wow.  So, in retrospect, do you feel a lot of remorse?

ANDY: Oh, absolutely.  And that’s the reason why the, the, the two families that lost the most out of this had, had like nothing to do with what it was I was going through.

MILES: Have you ever made any attempts to reach out to them or have any contact with them?

ANDY: I think one day, one day I would like to but I mean, in my mind like, I’ve already taken so much from them, like I don’t want, I don’t want to take from them, like, the ability to dictate the timeline of, of them getting in contact with me. I don’t want to write them and be like, “Oh hey, I’d like to get in, I’d like to, I’d like to apologize to you guys,” because, cause that’s not, that’s not really fair to them. But I have, I have every intention of like, whenever they are ready to confront and everything.

MILES: Would you like to tell them you’re sorry?

ANDY: Oh, absolutely.  And, and I, I am sorry, and I will always be sorry.

MILES: Here you are. You were 15 when sentenced, you are two days away from your 27th birthday, right?

MILES: So, and you face your first parole hearing, as I understand it, will be when you’re 65.

ANDY: I mean, it sucks but I just, one foot in front of the another.

MILES: One day at a time, huh?

ANDY: One day at a time.

MILES: Let me ask you though. Is that justice?

MILES: Tell me about that. Do you think your brain was different than it is now?

ANDY: I mean, it’s not what I think, it’s what all the smart people say.

MILES: Tell me what you read about it.

ANDY: No just about how, like the frontal whatever can’t process like the, the, the consequences of actions as well as a developing brain could.  And it’s more like impulsive.

MILES: Were you impulsive then do you think?

ANDY: Oh absolutely.  I was jumpin’ off of roofs and trying all sorts of skateboarding tricks, and all the dumb stuff I could do.

MILES: When you look back on it, I’m sure you thought about this a lot.  How could it have changed for the better?  Was there anything that you wish you did or that you wished your dad did (inaudible) happen?

ANDY: No, I wish I was brave enough to, to tell someone what was going on with me.  I wish I was like, courageous enough to confront, you know what I mean, everything that was happening to me.

MILES: Yeah. Your father says he didn’t really know what was going on, you know. He saw that you’d changed (inaudible) more like a teenager, that you weren’t as close as you were, but that happens when boys become teenagers.  You never (cut off.)

ANDY: I was an awesome liar.

MILES: Really, tell me about that.

ANDY: Yeah.  No, yeah. I would, I would.  Like if I was out doing drugs I would cover myself up with cologne before I came in.  And like if, if I got beat up I’d tell him I got in a fight, and it wasn’t that big a deal. I would try to get my report cards before he would get them.

MILES: Confront your what?  There was a noise.

ANDY: My failures. I didn’t want to let him know that like my grades were slipping, that his son’s a drug addict, you know what I mean. Those aren’t things, those aren’t things to be proud of.

MILES: What do you think, when you hear about something like the Newtown shootings, what goes through your mind?

ANDY: It’s just tragic, man. I want them, like, I want, like, the next one to be the last one.  I want like all this, because everybody, everybody is all up in arms, “Oh we gotta stop this, blah blah blah…

ANDY: For like two weeks straight that’s all we hear about is, oh how everybody’s outraged, and how big a tragedy this is, and then, and then, two weeks later the new story is about how cold it’s gonna be. You know, I mean like, it’s, it’s, the attention span of this country’s so short that it’s frustrating.

MILES: But what’s, you know, I’ve got less than two minutes according to the recording there. Share with our audience, what’s the lesson that you can share from behind bars to others here?

ANDY: I mean, at least in my situation like if you, I think there is, there is a handful of red flags in my case, you know what I mean. You can talk to your kids, freakin’ make them tell you what’s going on.

ANDY: I mean it’s certainly possible but you’re always gonna (cut off)slip through the cracks, but I mean you can, it’s totally possible.

MILES: Have you thought about where you would want to be right now if this hadn’t happened?

ANDY: I mean, at least now, like doing, doing good somewhere.  You know what I mean, like, helping people out.

MILES: I saw one of the letters from when you were younger that your father shared with me, that you wanted to go to the Naval Academy, and he said that you wanted to fly helicopters.  All those dreams. You still think about that?

MILES: What’s it like on a day-to-day basis with you?

MILES: Are you scared, are you sad?  What happens?