The human capacity for language divides our species from the rest of the animal kingdom. Language has not only allowed us to conquer all corners of the globe, but to devise writing, mathematics and all things thereafter.

But researchers can find many of language’s basic design features in the communication systems of other animals. For example, many animals have particular calls for specific objects and meanings, and some even seem to combine calls in meaningful, albeit rudimentary ways. These lines of continuity, however thin, drive home the point that, at its essence, language is part of our biology.

Our new research suggests that a biological perspective is indeed necessary to resolve why languages have the range of sounds they have. We draw on evidence from paleoanthropology, speech biomechanics, ethnography and historical linguistics to suggest that new speech sounds emerged in our ancient ancestors as their jaws and teeth evolved to deal with new kinds of diets.

Language is also often seen as a fixed skill – it arose with the emergence of our species and has been stable in its basic design since its origin.

To study the origins of language and understand how it evolved into the remarkable faculty that we have today, it makes sense to investigate language from a perspective that includes biology as well as culture. But language doesn’t figure into the typical biology curriculum. It’s mostly considered a purely intellectual and cultural phenomenon, grouped together with literature and art as part of the humanities.

But this categorization is peculiar because, like the communication systems of other animals, language is simply part of our nature. We process it with the neural wiring in our brains, and we produce it with our bodies: mostly with our mouths, but in the case of sign languages, also with our hands and other gestures.

Language is also often seen as a fixed skill – it arose with the emergence of our species and has been stable in its basic design since its origin.

This traditional view is part of what researchers call the uniformitarian assumption in linguistics and anthropology. The assumption is that languages today are the same – in terms of their types and distributions of linguistic structures – as they were in the past. 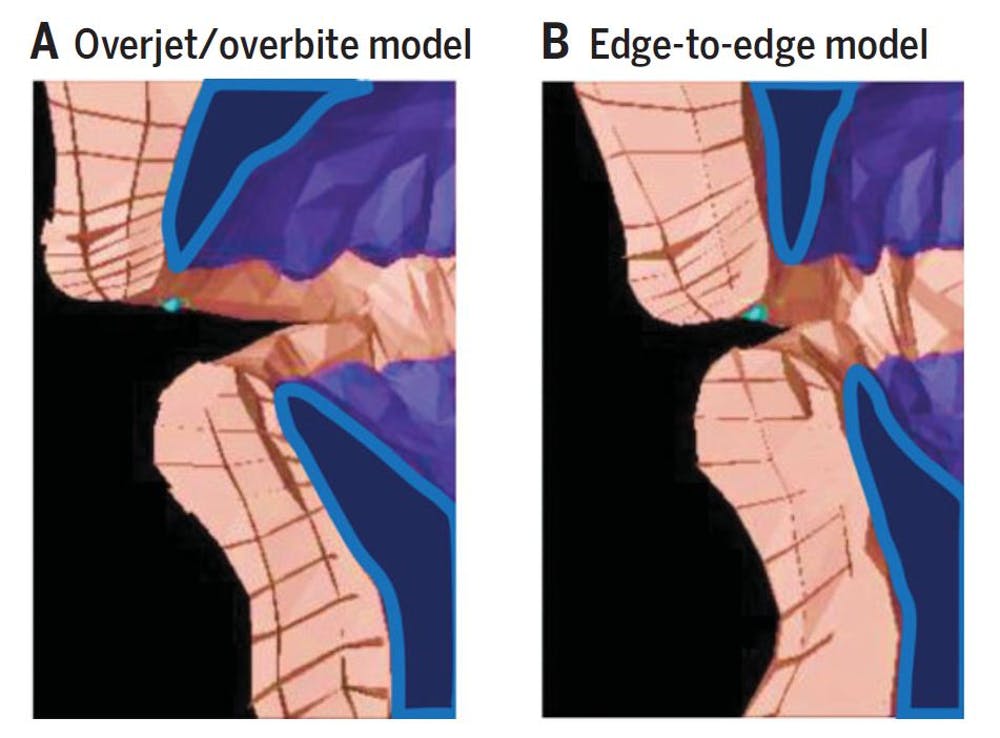 Biomechanical model of producing an ‘f’ sound with an overbite/overjet (left) versus an edge-to-edge bite (right). Scott Moisik, CC BY-ND

Our research group’s work directly challenges this uniformitarian assumption. We believe the range of available speech sounds used in human language has not remained stable since its origin. Our research shows that labiodental sounds – such as “f” and “v,” which are made by raising the bottom lip to the upper teeth – began to arise only after the transition to agriculture, between 10,000 and 4,000 years ago (depending on the world region).

While labiodentals are rather common today and appear in roughly half of the world’s languages, we show that in the case of Indo-European languages, they’ve been innovated mainly since the Bronze Age.

Why? What caused this sudden emergence of a new class of speech sounds?

To understand the relevant processes, we need to quickly dive into some biological anthropology. All primates start with an overbite and overjet bite configuration – colloquially a scissors bite – both with their baby teeth and their permanent teeth. Then a traditional diet of tough foods naturally develops the scissors bite of a young individual into an edge-to-edge bite by adulthood.

The invention of food processing technologies – like milling and fermentation – that gained steam with the development of agriculture allowed people to move toward a softer diet. And those softer foods meant people retained the scissors bite well into adulthood. For example, the archaeological evidence shows adult skulls with the scissors bite as early as 4,300 years ago in what is today Pakistan.

This rather recent change in the human bite paved the way for labiodentals to be incorporated into spoken languages. This process gradually began to appear in geographic areas including Europe and South Asia where there was increased access to softer foods through food processing technologies.

But these new sounds didn’t emerge everywhere: Retention of the overbite and overjet only facilitates the ease of producing labiodentals and increases the probability for producing them accidentally – it does not mandate it. So across diverse regions, societies and cultures, many groups slowly developed a new class of speech sounds, but others did not.

Probabilities of labiodental articulations of various sounds in the history of the Indo-European languages. Balthasar Bickel, CC BY-ND

Ideas to chew on

A biological perspective on language evolution allows us to ask exciting new research questions, like how did the current diversity of speech sounds develop over evolutionary time?

At present, there are over 2,000 different speech sounds that play a role in the world’s roughly 7,000 or so spoken languages. These speech sounds range from the omnipresent cardinal vowels (i, a and u) found in most languages to the rare click consonants found in a handful of languages spoken in southern Africa. Why is there such immense diversity in the sounds of the world’s languages?

Recent research suggests that the basic anatomical conditions for speech were in place long before the emergence of Homo sapiens. According to those results, it was chiefly a matter of neural development that allowed the sophisticated motor control that human beings now have over their speech organ. But our new findings now hint that researchers might have underestimated the importance of fine anatomical details: While the basics may have been set, some sounds may be older than others in the hominin and primate lineage, simply because of anatomical conditions and independent of motor control.

We believe that our discovery opens a new chapter in the quest for the origins of humanity’s most distinctive faculty, language, a quest that has been called the hardest problem in science.

Steven Moran is a postdoctoral researcher at Department of Comparative Linguistics and Balthasar Bickel is a professor of general linguistics at the University of Zürich. This article was originally published on The Conversation. Read the original article.