This drone will fly on one of Saturn’s moons. Here’s the woman leading the mission

A billion miles sounds impossibly far, but in planetary terms, “You can get there,” said Elizabeth Turtle.

That’s why she is leading the hunt for rocks on Titan — one of Saturn’s moons that, surprisingly, could tell us a lot about Earth’s early days.

Turtle — who goes by the nickname “Zibi” — is the principal investigator for NASA’s Dragonfly mission, a drone-like vehicle the space agency plans to launch toward Titan in 2026.

The Dragonfly rotorcraft will finally arrive on Titan in 2034, after an eight-year-long voyage from Earth. During its 2.7 year-long baseline mission, it will take advantage of Titan’s dense atmosphere to travel more than 100 miles — almost double the distance traveled by all of the land-based Mars rovers combined. By flying to multiple locations, the mission hopes to collect organic samples from a variety of environments. 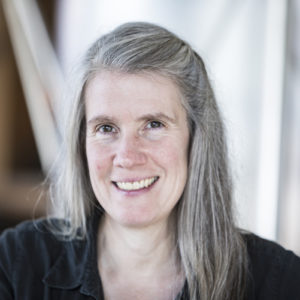 Titan is one of the many satellites in the outer solar system with an interior water ocean, making it an ideal place to search for elements necessary for the origin of life. It’s much colder than our planet, but is chemically similar to early Earth, Turtle said.

Humans have probed Titan in the past. In 2005, the European Space Agency landed on the moon during the Cassini mission, parachuting a camera toward the terrain that took photos during its two-and-a-half-hour descent. With Dragonfly, scientists hope to measure the chemical composition of the moon’s surface. They’ll look at how Titan’s atmosphere could affect those chemical compounds to get a better picture of which might be biologically relevant to the development of life.

In an interview with the PBS NewsHour, Turtle, who is also a planetary scientist, discussed the mission and what scientists are hoping to find. (Spoiler alert, it may not be aliens.)

What brought you into this field?

I’ve always been really interested in astronomy. My dad majored in astronomy. I kind of grew up going out to look at comets and meteor showers and aurora and things like that. I’d always had an interest in college. I took a bunch of astrophysics courses and then I started taking planetary science courses. The planets are a little more closer and tangible, you can get there.

At the time, Voyager was making its way out to the Neptune and just the idea of exploration and the sense of how much we were learning in such a short period of time with these Uranus and Neptune flybys, was very quick. The New Horizons flyby took a very short period of time, and yet it completely transforms the understanding of the system. 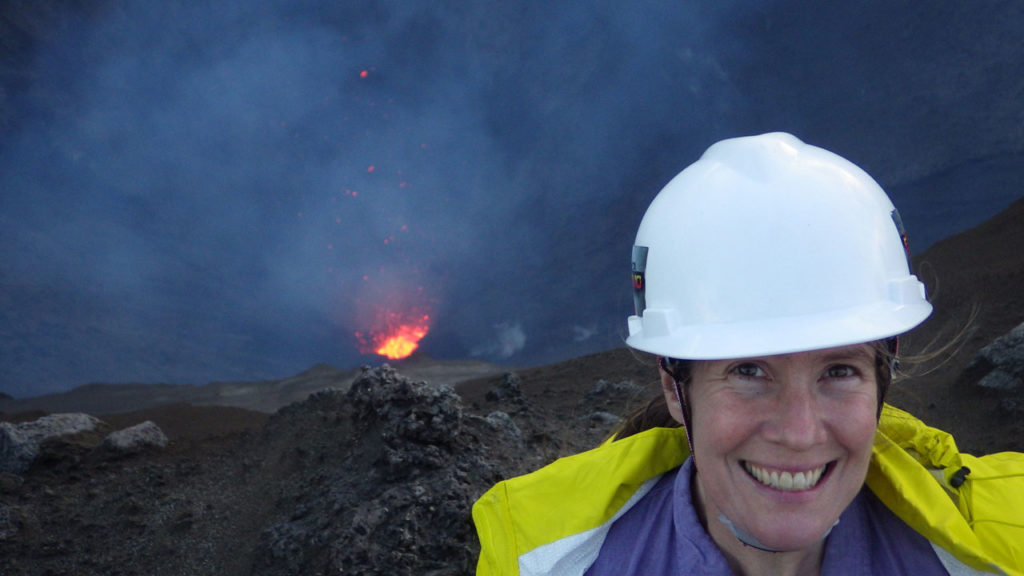 Zibi Turtle is seen here in front of Yasur Volcano during a 2014 trip to observe and study volcanoes in Vanuatu, an archipelago about 1,000 miles east of Australia. Photo by Zibi Turtle

It’s a very exciting field, there’s just so much we don’t know, and so many things that we have opportunities to learn.

Just for starters, what’s so special about Titan?

Titan is unique in that it’s the only moon in the solar system to have a dense atmosphere. This atmosphere is mostly nitrogen, like Earth’s atmosphere, and then it has methane as its next major constituent. It’s so much colder in the outer solar system that the compositions are different, so you get very complex organic molecules. This complex organic matter has had the availability of liquid water in the past. You have all the ingredients we know to be necessary for life on the surface of Titan.

We want to study the pre-biotic chemistry — the chemical steps that occurred that may have supported the development of life. 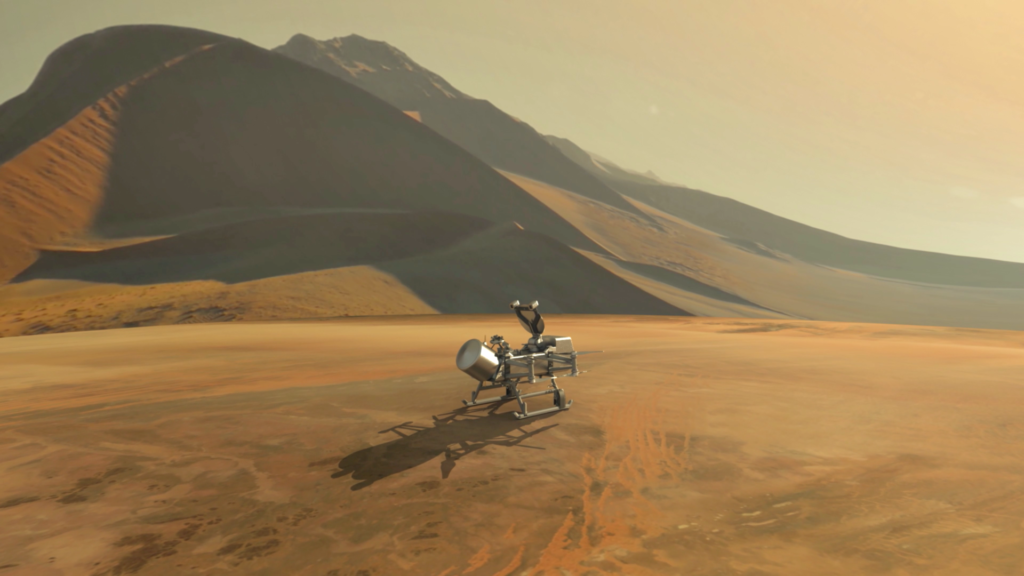 Titan in many ways chemically is similar to early Earth, and so by studying Titan we can get an understanding of what processes may have happened here.

Instead of driving across the surface the way we often do on Mars, we fly from place to place with a rotorcraft. This gives us the ability to get to places over 100 kilometers apart and measure compositions in different environments with different histories.”

What else is cool about Titan?

In the past on Titan, liquid water would have been in contact with this organic material, meaning there’s great opportunity for all of this pre-biotic organic synthesis to occur. We really want to understand the results of these chemistry experiments that Titan has been doing for millions of years. Then we want to put that in the context of Titan as a system.

Titan has a much thicker ice crust, but it has this organic material and that’s really where the connection to the early Earth comes in.

Titan has a much thicker ice crust, but it has this organic material and that’s really where the connection to the early Earth comes in. It’s about the only place in the solar system that has this level of chemical complexity in terms of just the size of the carbon molecules on Titan, so it’s really the only the only parallel to Earth in terms of the chemistry available.

The other thing that’s similar to the Earth is that because there’s an atmosphere interacting with the surface, the geology is very similar. Not only do you have these similar molecules, but they have processes, like wind and rain, transporting them across the surface and mixing them the same way we have here on earth. There are lakes and seas on Titan of liquid methane instead of water here on earth, Titan being made of water ice instead of silicate rock here on Earth.”

I am sorry I have to ask this question — what’s the likelihood that you’ll find aliens or something that’s actually alive?

We don’t have reason to believe life would have developed on Titan. We can’t say that it didn’t, but it’s certainly not necessarily something we’d expect. The surface temperature on Titan is 94 Kelvin, -290 Fahrenheit. That’s certainly not conducive to life as we know it. Everything is frozen solid at the surface.

We have the capability to make the measurements to detect chemical bio signatures, things like the chiral preferences for the structure of molecules. We do know that water and organic material have been in contact for long periods, but we don’t know how long it took life to develop on Earth. We don’t even know how long you need.

What frustrates you about these projects?

Hundreds of people are working on all of these projects and coming up with ways to solve challenges, to make things work better. It’s a lot of fun. But it’s more fun when it works. Those are some of the less fun moments of mission or instrument design when you hit challenges that there isn’t a way to surmount. That’s where things can be on the more frustrating side.

What are some of the things that excite you most?

The exploration is incredibly fun. I remember as a grad student and postdoctoral researcher coming in to work at night when the new images from Galileo of Io were coming back, there’s something different every time you look at it. It was spectacular to rush in and pull up the images and see what had happened, what volcanoes had started erupting since the previous flyby. 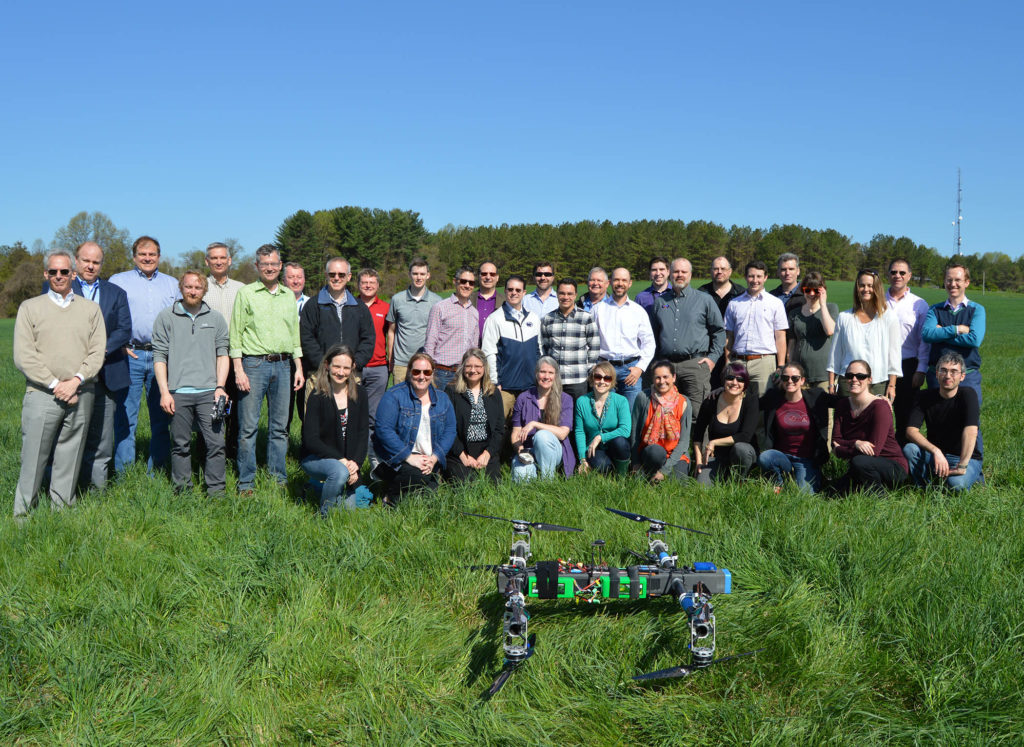 Zibi Turtle (bottom row, center) poses with the rest of the team from the Dragonfly mission. Image by NASA

We went from barely knowing what the surface of Titan was like to understanding the geography of Titan, geological processes and how they fit together and how Titan works as a system. It’s a huge privilege to be able to participate in that journey. And we’ll be doing the same with the Europa Clipper and with Dragonfly.

Left: The Dragonfly rotorcraft will be able to fly more than 100 miles to multiple locations on Saturn's moon, Titan. Image by NASA