This everyday chemical was cast aside. Its replacement might be making cats sick

The increase, which has jumped from 1 in 200 to 1 in 10 since the 1970s, was recently linked to a class of flame retardants called polybrominated diphenyl ethers (PBDEs). The chemicals featured in many household items — from mattresses and makeup to couches and carpets — were phased out starting in 2004.

But new research suggests the replacements for PBDEs may be just as bad, and now, just as prevalent.

In the study, published July 10 in Environmental Science & Technology, researchers outline a connection between hyperthyroidism in indoor cats to organophosphate esters (OPEs), which have since supplanted PBDEs.

As manufacturers voluntarily phased out PBDEs because of health concerns in both pets and humans, OPEs were substituted in a range of household products to meet fire safety regulations.

Some research has pointed to OPEs as potential hormone disruptors. And if OPEs are making their way into house cats, those chemicals might be affecting humans, too.

To measure if OPE flame retardants are causing harm in our feline friends, and possibly shed light on how the additives may affect humans, the researchers fitted house cats with pet tags made of silicone.

The tags “mimic biological cells” by absorbing chemicals present in the air, said Kim Anderson, a chemist at Oregon State University who led the study.

She explained these tags measure “bioavailability” — which means chemicals that enter the pet tags likely will also enter animal’s cells. Rather than just record the chemical levels in the surrounding air or environment, the pet tags report a more accurate picture of what accumulates inside of an animal — without requiring a blood or urine sample. In a previous study on pregnant women, measurements by silicone bracelets more accurately matched urine samples than measurements taken using traditional air filters in backpacks.

The team fitted 78 older house cats — 39 with hyperthyroidism and 39 without — with silicone pet tags. After a week, the team extracted the adsorbed chemicals by washing the tags in ethyl acetate. To measure the amount of OPE in each pet tag, the rinse was injected into a machine — called a gas chromatography mass spectrometer — that identifies chemicals based on their size.

To check if specific cat behaviors were associated with higher levels of OPEs, the researchers also asked pet owners to fill out a questionnaire about their household, including questions about where cats spent most of their time and when new furnishings were purchased.

All of the pet tags adsorbed at least one type of OPE. But cats with hyperthyroidism had 16 percent higher levels on average of one particular OPE–called Tris(1,3-dichloro-2-isopropyl) phosphate, or TDCIPP– than non-hyperthyroid cats.

The higher the amount of TDCIPP found in the tags, the higher the levels of thyroid hormone found in cat blood, even in those without thyroid disease. 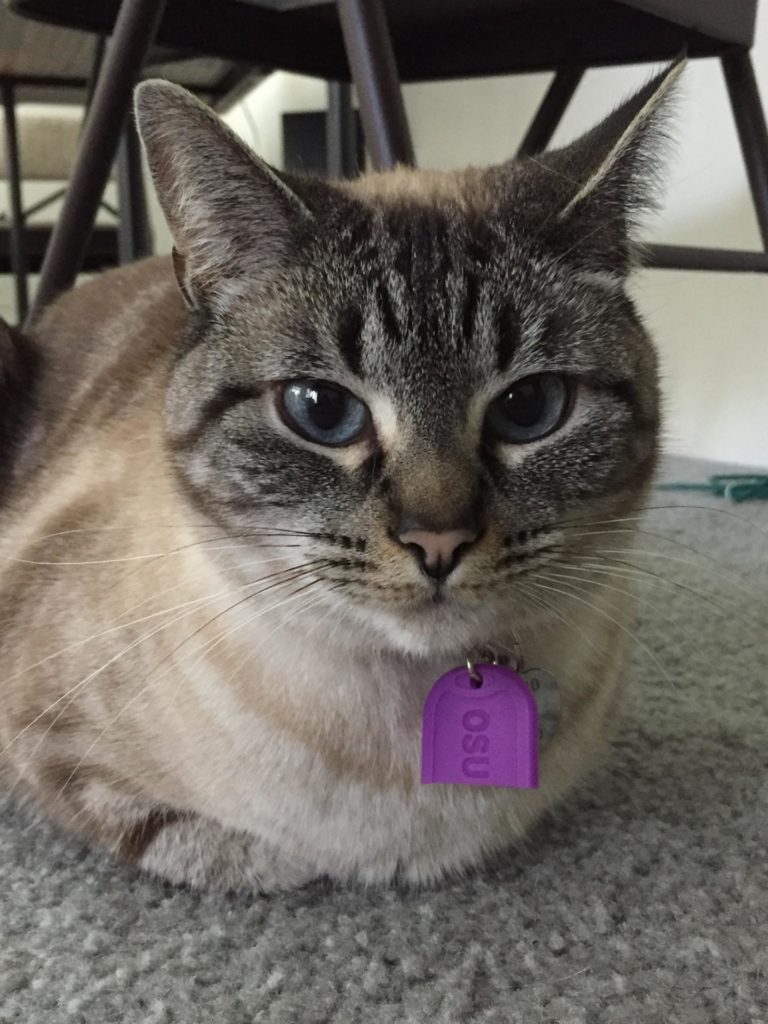 This house cat is wearing a silicone pet tag, which absorbs chemicals from the air. When researchers analyzed one of these absorbed chemicals–a new flame retardant used in furniture and other household items–they found higher levels in cats with hyperthyroidism. Adapted from Environmental Science & Technology 2019, DOI: 10.1021/acs.est.9b02226

Three households owned two cats that tended to spend time in different areas of the house. Of these three pairs, the cats that spent more time on upholstered furniture also accumulated more TDCIPP flame retardant in their pet tags.

This kind of research “makes us stop and realize that the chemicals that are being used in products don’t stay where they’re put,” said Linda Birnbaum, a toxicologist at the National Institute of Health who was not involved in the study. Birnbaum added, if we’re seeing elevated levels of flame retardants in cats, they are likely affecting other indoor pets too.

When it comes to household chemicals, scientists are worried about more than OPEs. Studies of dogs and cats have linked melamine–a chemical also found in flame retardants as well as in countertops and dry erase boards–with renal failure in these animals.

Studying pet exposure to household chemicals can also tell us what humans are exposed to — especially children that spend time in similar places (close to the ground) and have similar habits (ingesting dust).

Outside of flame retardants, humans and pets are exposed to other chemicals found in home settings. Plastic-strengthening chemicals, teflon, the preservative paraben and BPA have all been shown to accumulate in animals, and humans, and have been linked to thyroid disease and endocrine reproductive issues said Karthikraj Rajendiran, an environmental chemist at the Wadsworth Center, who was not involved in the study. These chemicals are added to cookware, personal care and beauty products, flooring, and food and beverage packaging, to name a few.

Rajendiran recognizes chemical additives have a purpose, but “there should be a clear standard [for] investigating how much can really leach out…to the environment” as well as strict regulations limiting the amount manufacturers can add to products. And, he added, “there should be a serious search for a new alternative or safer chemicals that can do the same job.”

Left: As manufacturers voluntarily phased out PBDEs because of health concerns in both pets and humans. New research suggests their replacements may be just as bad. Photo by JJIMAGE/via Adobe Stock

With more extreme heat, air conditioning becomes a matter of life and death