On Thursday, NASA announced the target of its next expedition probe into the corners of our Solar System: Titan, Saturn’s largest moon and one of the most intriguing places in the hunt for extraterrestrial life.

Recap the Dragonfly announcement in the player above.

“I am proud to announce our next New Frontiers mission — Dragonfly — will be the first drone lander with the capability to fly over 100 miles through Titan’s thick atmosphere,” NASA Administrator Jim Bridenstine said in prepared message for Thursday’s announcement. “NASA is pushing the boundaries of human knowledge and expanding the limits of technology.”

New Frontiers refers to a series of missions, developed in 2002, to conduct compelling expeditions of our solar system. Each mission costs no more than $850 million and recruits members from industry, small businesses, government laboratories and universities. The first three missions in the New Frontiers directorate — New Horizons, Juno and OSIRIS-REx — took aim at Pluto, Jupiter and the asteroid Bennu, respectively.

Titan is an unusual yet familiar place.

Titan is an unusual yet familiar place. Its atmosphere resembles that of early Earth’s — that is, being high in nitrogen. There are clouds, liquid water, rivers, lakes and seas. Mountainous dunes pepper its landscape.

“Titan has all of the key ingredients,” said Lori Glaze, director of NASA’s Planetary Science Division. “Liquid water and liquid methane … the complex organic molecules. We have the energy that we know is required for life.”

But Titan also boasts temperatures below -290 degrees Fahrenheit and pressures that could suffocate a human’s lungs. These cold temperatures have led scientists to suspect a subsurface ocean may be buried 35 to 50 miles below, under a layer of rock hard ice. The water in the ocean may still be fluid thanks to the presence of ammonia, which allows water to remain unfrozen at extremely cold temperatures. 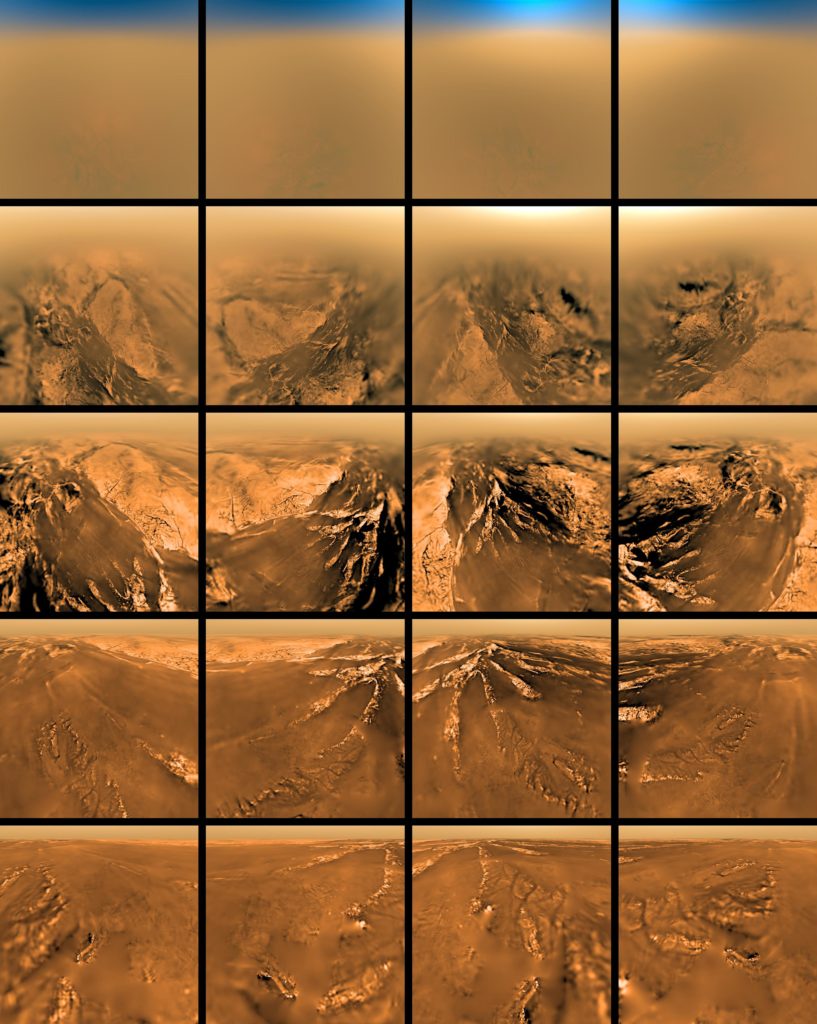 Dragonfly will be lead by Elizabeth Turtle, a planetary scientist based at Johns Hopkins University’s Applied Physics Laboratory in Laurel, Maryland. The new mission will pull clues from Cassini, an international spacecraft that surveyed Saturn and moons for 13 years. Cassini tossed a probe onto Titan — named Huygens — that successfully parachuted onto the moon’s surface. It captured about four hours of data before its batteries died.

Dragonfly will rely on Cassini’s records to visit Titan during a period of calm weather. NASA released these details on what will happen next:

[Dragonfly] will first land at the equatorial “Shangri-La” dune fields, which are terrestrially similar to the linear dunes in Namibia in southern Africa and offer a diverse sampling location. Dragonfly will explore this region in short flights, building up to a series of longer “leapfrog” flights of up to 5 miles (8 kilometers), stopping along the way to take samples from compelling areas with diverse geography. It will finally reach the Selk impact crater, where there is evidence of past liquid water, organics – the complex molecules that contain carbon, combined with hydrogen, oxygen, and nitrogen – and energy, which together make up the recipe for life. The lander will eventually fly more than 108 miles (175 kilometers) – nearly double the distance traveled to date by all the Mars rovers combined.