WATCH: SpaceX launches the Falcon Heavy, the rocket that could go to Mars

On Tuesday afternoon, a rocket the size of a 20-story building, containing 27 engines and a cherry-red Tesla Roadster as its payload, is slated to lift off from NASA’s Kennedy Space Center in Florida. It will be the maiden flight of Space X’s Falcon Heavy, the most powerful rocket to launch in 45 years, since NASA’s Saturn V, which last flew in 1973.

Update: Falcon Heavy is scheduled to launch Feb. 6 at 3:45 pm E.T. Watch the event in the streams above and below.

As you witness this historic launch, here are some things to know about this mighty spacecraft.

What to expect from the launch: Falcon Heavy will launch from the Kennedy Space Center’s Pad 39A, the same launchpad used by the Apollo moon missions and space shuttle flights.

As the powerhouse cousin of SpaceX’s premiere Falcon 9 rocket, Falcon Heavy is built to be reusable. Its lower section comprises three Falcon 9 booster cores, holding nine engines each. Together, these cores generate more than 5 million pounds of thrust and allow the rocket to carry more than 140,000 pounds of cargo into low-Earth orbit. 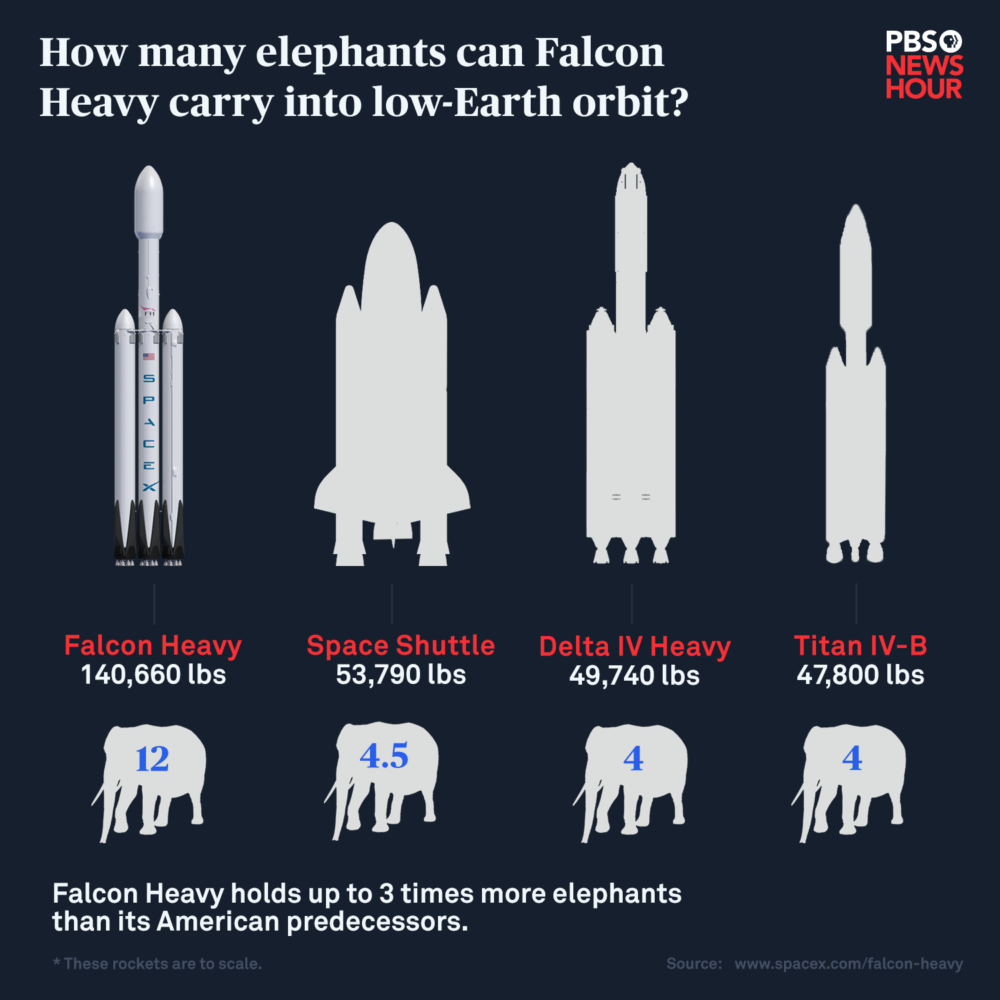 For this test launch, if it’s successful, two of the cores will break away and return to the landing pad, while the third core will land at sea, on a remote-controlled SpaceX droneship floating over the Atlantic Ocean. For future launches, all three cores will return to Kennedy Space Center.

As for the cargo? The Falcon’s sole passenger will be SpaceX CEO Elon Musk’s cherry red Tesla Roadster, which will soar through space while blasting David Bowie’s “Space Oddity.”

There is no scientific reason to send a car into space, but when asked on Twitter about why he wanted to send the car to space, Musk replied: “I love the thought of a car drifting apparently endlessly through space and perhaps being discovered by an alien race millions of years in the future.”

If all goes according to plan, the roadster will enter heliocentric orbit (locked in a dance with our sun) and will travel slightly farther than the distance of Mars’ orbit.

The road to launch day: After a successful static engine test on January 24, Musk quickly took to Twitter to set a launch date. But to get to this point, SpaceX faced several setbacks.

Originally slated to launch as early as 2013 or 2014, SpaceX had to repeatedly push back its plans for Falcon Heavy. At a conference in July 2017, Musk announced why this massive spacecraft posed so many challenges over the years.

“At first, it sounds really easy. Just stick two first stages on as strap-on boosters. How hard can that be?” Musk said. “But then everything changes. All the loads change. Aerodynamics totally change. You’ve tripled the vibration and acoustics.” 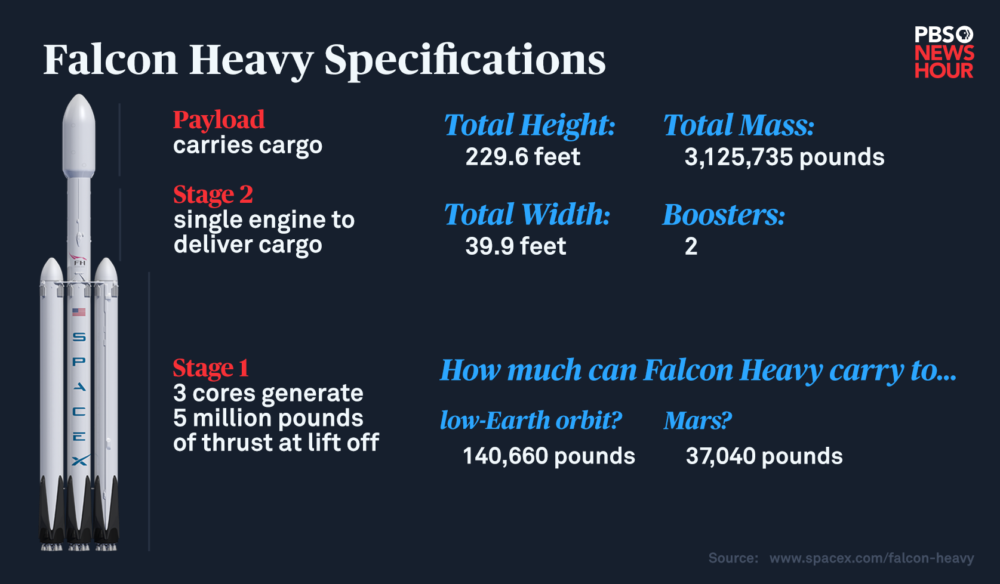 SpaceX’s Falcon Heavy is officially the most powerful, operational rocket. Here are its specs. Visual by Rashmi Shivni

According to SpaceX’s Falcon Heavy website, building and designing a cost-effective rocket for carrying humans far into space is no easy feat. After years of troubleshooting, the Falcon, SpaceX says, is capable of lifting more than 54 metric tons, or 119,000 pounds, into orbit–approximately equal to a 737 jetliner packed with fuel, people and luggage.

What Falcon Heavy means for human space travel: In December 2017, President Donald Trump directed NASA to send humans back to the Moon. NASA estimated a modern moon mission could cost about $104 billion. Falcon Heavy costs $90 million and is one of the cheapest vehicles to launch to-date.

NASA continues work on its Space Launch System, which if on time, could take humans to the moon as early as 2022. However, the SLS could cost up to 10 times more than Falcon Heavy.

“Falcon Heavy was designed from the outset to carry humans into space,” the SpaceX website reports. “And [it] restores the possibility of flying missions with crew to the Moon or Mars.”

SpaceX’s hope is to send two paying customers on a trip around the moon in the future, potentially as early as the end of 2018 using Falcon Heavy.