A Chinese space station is tumbling uncontrollably toward Earth, and no one will know where its pieces will land until hours before it gets here.

Though its name means “heavenly palace,” the space station, named Tiangong-1, lasted only five years before malfunctioning. It launched in 2011 with a two-year mission. The last astronauts departed the 10-ton station in June 2013, and Chinese officials put the space station into sleep mode, expecting it would remain operational until they could facilitate a controlled re-entry. But in March 2016, Tiangong-1 unexpectedly stopped working, according to a letter filed to the United Nations.

Since then, the school bus-sized station has tumbled through space, gradually slowing and falling out of orbit due to atmospheric drag. Though our atmosphere becomes thinner as you increase altitude, its upper limit is 6,200 miles above sea level. In low-Earth orbit, the air is still thick enough to create drag and bring down the wayward station.

While your chances of being hit by a piece of Tiangong-1 are tiny — 10 million times less than your chances of being hit by lightning this year — the risk will be impossible to calculate until its final descent begins. And the risk encompasses more than just being struck by space debris, due to the hazardous materials potentially inside the space station. If the Tiangong-1 spreads these materials over thousands of miles, the risks of injury and environmental damage are still high. 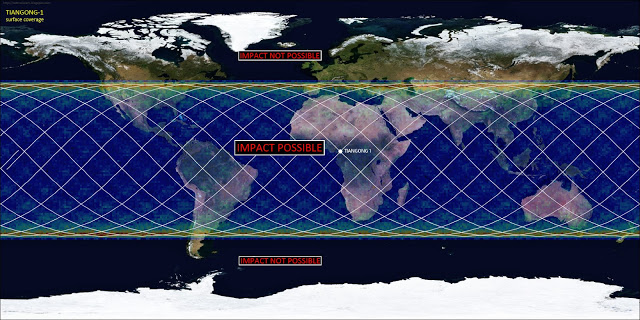 This map show locations where space debris from Tiangong-1 could collide, namely anywhere between latitudes 42.8 North and 42.8 South. Map by Marco Langbroek 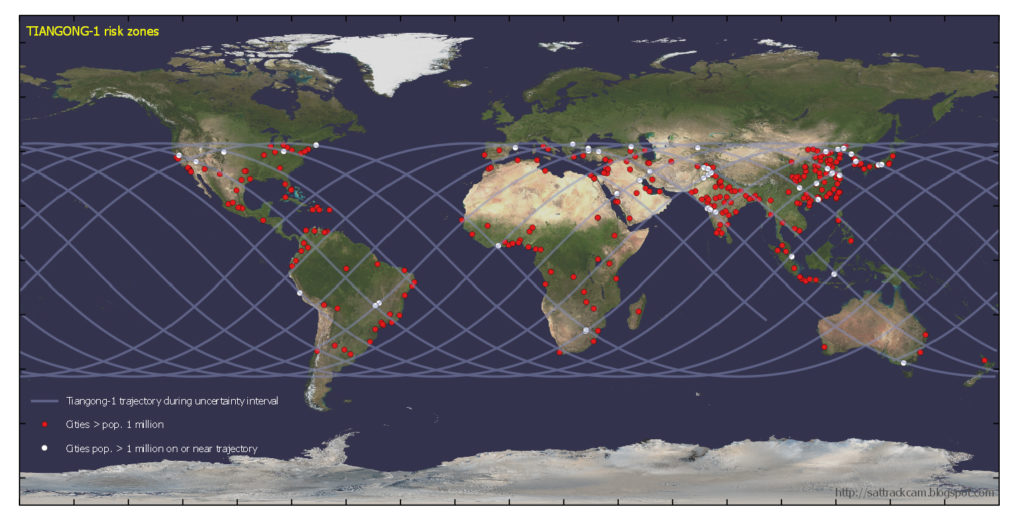 The lines on this map show where Tiangong-1 could come down. Cities with populations larger than 1 million people between the target latitudes are marked in red, and cities near a projected trajectory are marked in white. Map by Marco Langbroek

As of March 30, scientists predict Tiangong-1 will make its final plunge on April Fool’s Day, but there is a 14-hour window of uncertainty. (You can track the descent here and here).

“Only in the hours directly before the real re-entry can we narrow this window down to tens of minutes,” Dutch satellite tracker Marco Langbroek told the PBS NewsHour.

While much of the space station will break apart and burn during re-entry, scientists at the European Space Agency expect between 20 to 40 percent — 1.5 to 4 tons — of Tiangong-1 to survive the fiery plummet because the space station is so big. And pieces of rocket engines possess a higher likelihood of survival.

Based on Langbroek’s calculations and those made by the European Space Agency, Tiangong-1’s surviving parts are most likely to land in the ocean, but they could also hit anywhere across “the whole of Africa, Australia, New Zealand and the southern parts of Europe and Asia, South America and United States,” Langbroek said.

So, in the event that a remnant of Tiangong-1 lands in your backyard or destroys your car, here’s a guide to what you should do.

“You shouldn’t go run over and smell it, and you probably shouldn’t go pick it up,” said Laura Grego, a physicist and global security expert with the Union of Concerned Scientists.

“You shouldn’t go run over and smell it.”

It’s unclear what hazardous materials might have been inside Tiangong-1, she said. One example is hydrazine, a highly toxic and corrosive substance used as spacecraft fuel.

“There are pressure spheres and fuel tanks on these kinds of space stations. Those especially have a tendency to survive,” Langbroek said.

Still, only one person in history — Lottie Williams of Tulsa, Oklahoma — has been hit on the ground by falling space debris.

“The interesting thing about satellites is even though a large proportion are commercial, all satellites are considered national activities,” Grego said. “So they’re assigned to a country, not a company.”

That means if Tiangong-1 did strike your property, your sole means of recourse would be the Space Liability Convention, an international treaty ratified in 1972 by the United Nations. But under the treaty’s terms, you cannot personally seek compensation from China or any other nation. Only governments can make claims against another government.

Such was the case in 1978, when a nuclear-powered Soviet satellite — Cosmos 954 — sprinkled debris over 370 miles of Canada’s Northwest territories. No one was injured, but given the potential for radioactive contamination, Canada felt compelled to launch a cleanup mission, Operation Morning Light. They also sought $6 million in compensation from the Soviet Union. 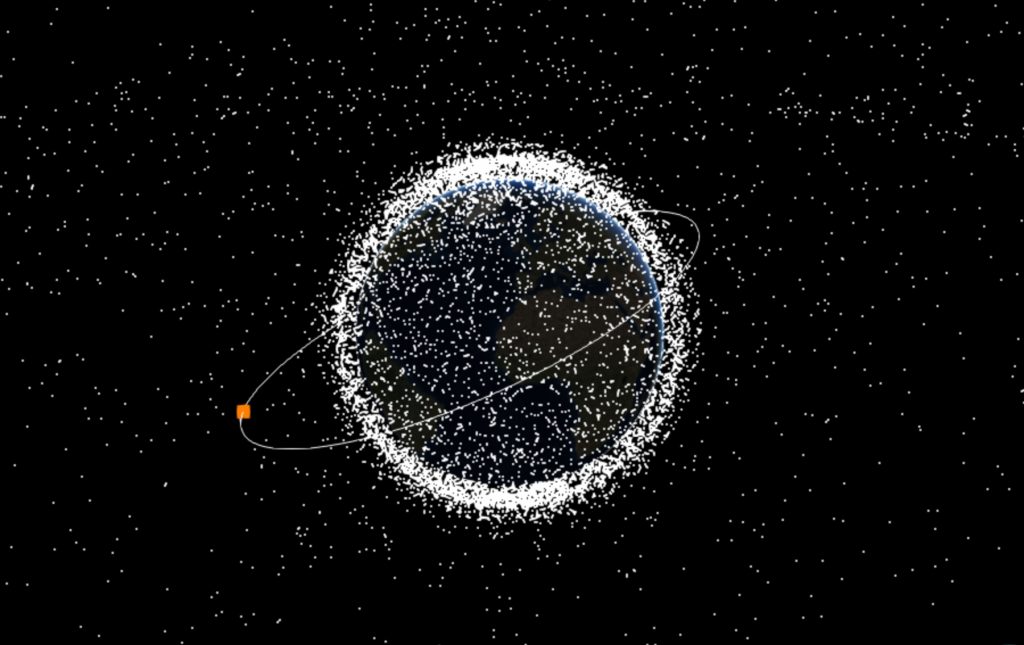 “They exchanged diplomatic letters with Russia referring to the Liability Convention,” said Cassandra Steer, acting executive director of Center for Ethics and Rule of Law at the University of Pennsylvania Law School. “Russia refused to give details, and offered just $3 million. Canada accepted and nothing more was pursued.”

This case never went to court, so to this day, the Liability Convention has never been litigated. In principle, it covers loss of life, personal injury or other impairment of health, as well as loss or damage to property of a state or person, Steer said.

“If you are sailing your yacht in the middle of the Atlantic, and you get hit by a piece of Tiangong, your country of nationality could bring a claim on your behalf for your compensation,” she said.

But a nation isn’t always able to file charges with the Liability Convention.

Step 3: Realize that space is a quasi-lawless frontier

No one was harmed in 1979 when NASA’s 80-ton Skylab made a semi-controlled descent that scattered wreckage across a rural part of northern Australia. Still, the Aussies used the opportunity to play a prank, issuing a $400 ticket for littering to the American space agency. Not to be outdone, a radio host in California raised funds to pay off the infraction.

But collisions created by out-of-control space objects become less amusing when they happen in orbit.

In 2009, a derelict Russian satellite slammed into a multimillion dollar communications satellite owned by the U.S.-based company Iridium. Experts expected the U.S. to invoke the Liability Convention, but proving liability in such cases is extremely difficult, said Ram Jakhu, director of the Institute of Air and Space Law at McGill University.

If a piece of Tiangong-1 causes damage nearby or on Earth, it’s considered “absolute liability,” Jakhu said, which means “China is pretty much liable for any of the damages.” When Russia brought down the 132-ton Mir space station with a controlled descent over the ocean, it took out a $200 million insurance policy, just in case. 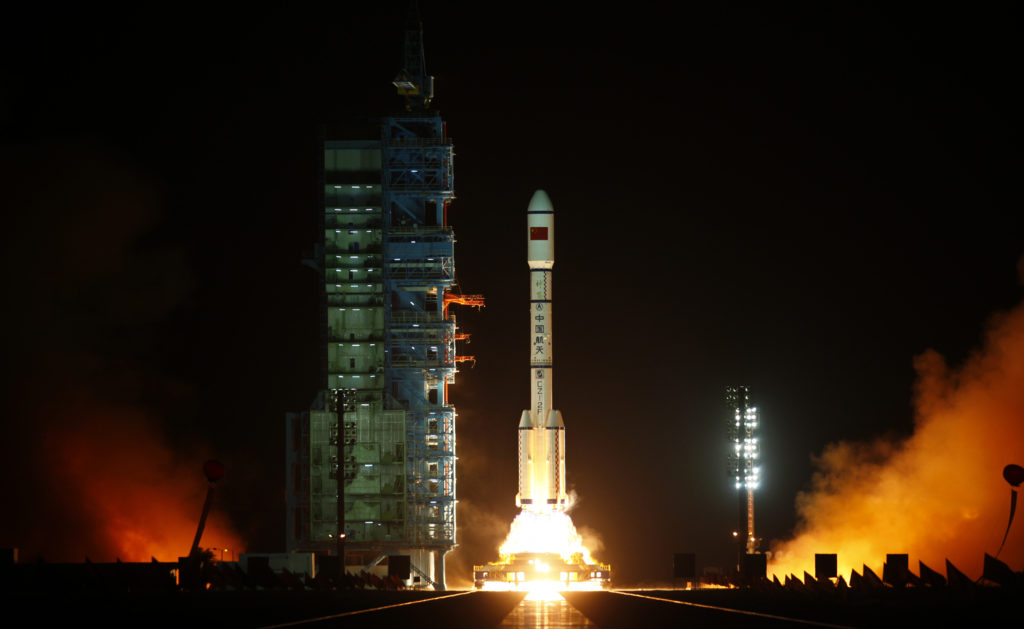 But in space, one has to prove “fault liability,” namely that a company or the country made a mistake that caused the collision.

That’s why the Iridium case crash-landed. Jakhu said because of a loophole in space law, Russia was under no obligation to move its defunct satellite (its propulsion system failed many years earlier). There is no penalty for leaving broken satellites or space stations in orbit. Moreover, Russian officials argued that the U.S. company was at fault and should have maneuvered its satellite out of the way, since it had the capability to do so.

This loophole also explains why China wasn’t forced to stop Tiangong-1 from making an uncontrolled re-entry. Steer said this gap in the law exists because of the sheer amount of space junk encompassing our globe.

“There are tens of thousands of pieces of debris larger than 10 centimeters [4 inches], and at least half a million pieces smaller, although we have no way of knowing for sure,” Steer said. “It’s difficult to trace “ownership” or even who the launching State is for every piece of debris, even the larger ones.”

To remove this trash, Grego said some companies and governments are building space tugboats that would go up, attach to a broken satellite or space station and bring it back down

But Jakhu said there needs to be a penalty for leaving junk in space. Otherwise, the problem will only get worse. Companies are planning to launch even more small satellites into orbit, increasing the likelihood of more space collisions in the future.

Miles O’Brien contributed to this reporting.

Left: Tiangong-1, a Chinese space station, is expected to fall to Earth on April 1, though no one knows where or exactly when. Image by Analytical Graphics, Inc.