How these ingredients make your sunscreen work

With summer in full swing, when you hit the beach or the pool, or even just go for a walk, sun protection is vital. Not only does it prevent sunburns and premature aging, dermatologists will tell you it also combats skin cancer, which kills nearly 20 people in the U.S. each day.

But sunscreens come in many brands, SPFs and formulas — all of which can be confusing. On top of that, a recent study from the U.S. Federal Drug Administration showed that some common sunscreen ingredients are absorbed through the skin into the bloodstream, the consequences of which are unknown.

Should we be wary of sunscreens? Experts say the answer may depend on your sunscreen’s ingredients, but regardless, the benefits of using sun protection far outweigh the risks. The American Academy of Dermatology, the American Cancer Society and the FDA all continue to recommend regular sunscreen application.

“Everyone recommends the use of sunscreen,” said Theresa Michele, the director of the FDA’s Division of Nonprescription Drug Products and one of the authors of the recent study. “There’s good reason to be making sure people don’t burn out there.”

The PBS NewsHour dove into what you should look for in sunscreens, why you should wear them and why researchers and the FDA still think they’re safe.

What should be in your sunscreen?

Sunscreens contain two types of ingredients, which are either “active” or “inactive.” Inactive ingredients — lotions, oils or water — preserve and hold everything together. Active ingredients are the ones that actually keep you safe from the sun’s rays.

What to look for on your sunscreen label

And here’s what you shouldn’t see…

The FDA keeps a list of active ingredients that are “generally regarded as safe and effective,” and according to Michele, any product marketed as a sunscreen should include at least one, but usually two or more of those ingredients.

That’s because each ingredient usually works best at shielding the skin from certain wavelengths of ultraviolet or UV light.

Pretty much all sunscreens available to the U.S. market will protect you from sunburn caused by UV-B rays, a relatively short wavelength of sunlight. UV-A, a longer wavelength of light, can sink deeper into a person’s skin, contributing to aging and potential skin cancer. Combining ingredients often helps sunscreen manufacturers achieve protection from both UV-A and UV-B radiation.

READ MORE: Paul Rudd and the science behind youthful skin

Although the FDA doesn’t make this distinction, the American Academy of Dermatology divides active sunscreen ingredients into “chemical” and “physical” categories.

“Chemical sunscreens are what most of the current controversy is around,” said Bethanee J. Schlosser, a board-certified dermatologist at Northwestern University in Chicago.

The 12 chemical ingredients that the FDA has recommended since the 1970s include: cinoxate, dioxybenzone, ensulizole, homosalate, meradimate, octinoxate, octisalate, octocrylene, padimate O, sulisobenzone, oxybenzone and avobenzone.

As far as the public record can tell, the FDA had accepted these chemicals were non-hazardous decades ago, but without significant safety testing. The agency is now asking sunscreen manufacturers to provide more testing and information on each one, but has not gone as far as declaring these chemicals unsafe. 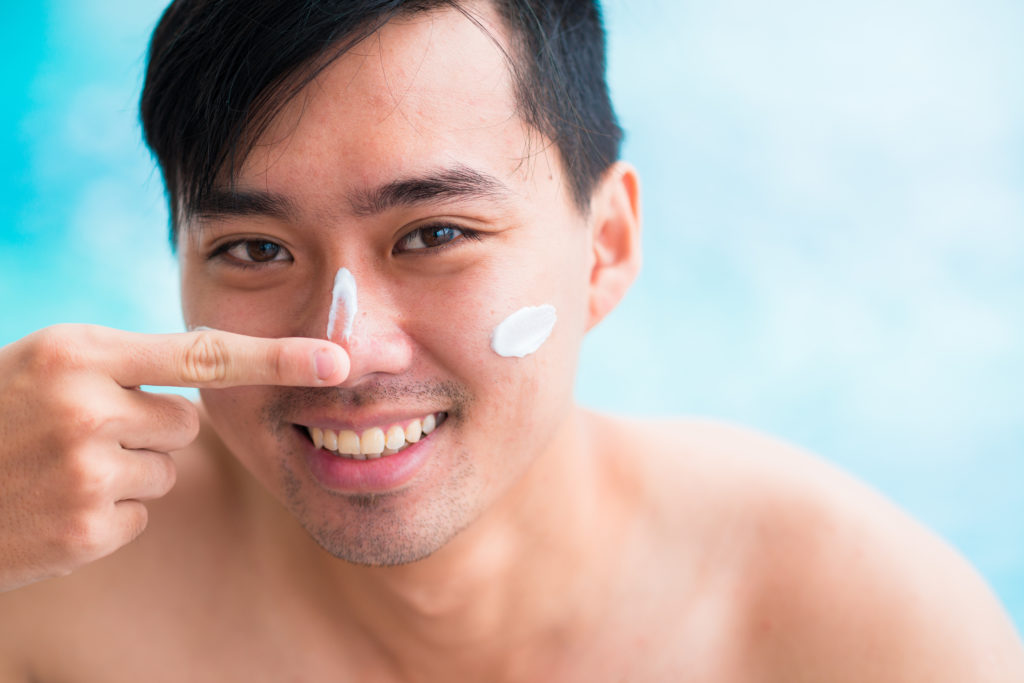 Sunscreen is part of a whole sun protection plan, including sunglasses, hats and other protective clothing. Photo by DragonImages/via Adobe Stock

“Think about the 1980s-era white zinc nose of a lifeguard,” said Schlosser. “That’s from the physical molecules.”

When sunscreens first became part of American life, people used them infrequently — just at the beach or the pool to prevent sunburn.

But in the decades since regulations on the over-the-counter concoctions were first put into place, Michele said, our understanding of skin damage has changed radically. Now, we know that premature aging and skin cancer can follow those painful sunburns or prolonged sun exposure.

“With that new knowledge,” Michele said, “we now recommend people wear sunscreens every day, head to toe, across all skin types and a wide age range.” 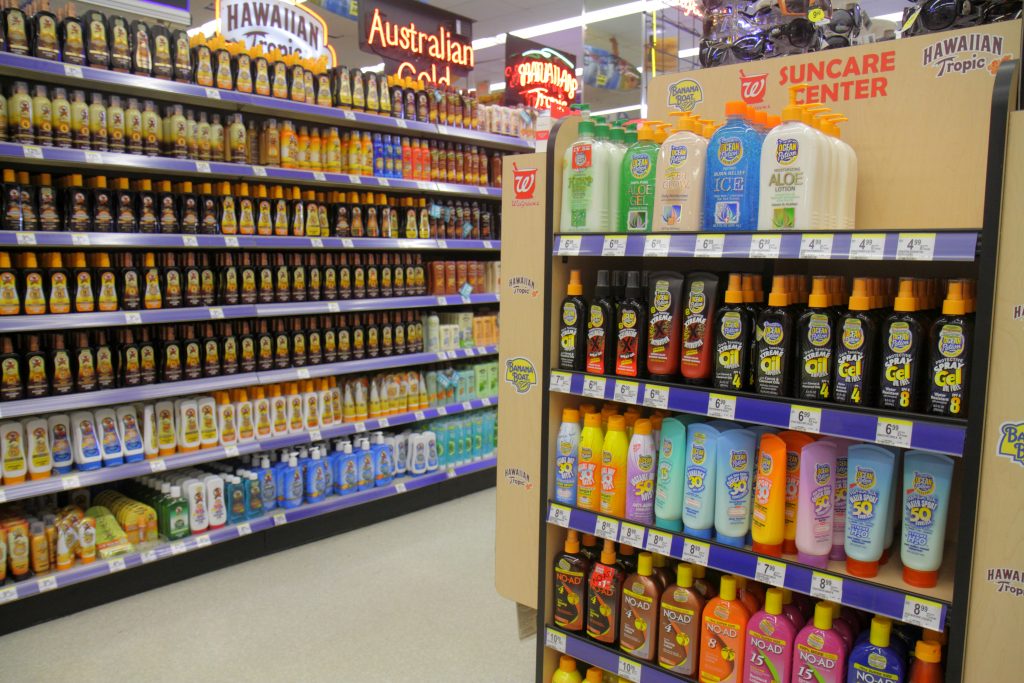 In the U.S., the FDA regulates all sunscreens commercially available to consumers. Photo by Jeff Greenberg/UIG via Getty Images

That means that today, sunscreen ingredients need to be tested for frequent, sustained use. So, the FDA — Michele included — recently released a study that looked into the absorption of certain sunscreen chemicals through the skin and into the bloodstream. All of the chemicals that the researchers tested for (avobenzone, oxybenzone, octocrylene and ecamsule) were detected at levels that require further safety testing, according to the study authors.

The risk of skin cancer is much higher than the risk of unknown sunscreen effects.

That doesn’t mean you should throw out your sunscreen. I repeat: the results don’t say whether or not the ingredients are unsafe. The study just outlines that the chemicals are detectable in the bloodstream, and more research will be needed to demonstrate if those events have any effects in the body.

In the meantime, the risk of skin cancer is much higher than the risk of unknown sunscreen effects.

“We definitely know for sure — for fact — that skin cancer is the most common cancer in the U.S., far and away. We know that ultraviolet exposure is a significant, and probably the primary, risk factor for skin cancer, and sunscreens reduce that risk,” Schlosser said.

What’s not safe are untested products like homemade sunscreens, as well as powders, wipes, shampoos or soaps that claim to prevent sun damage. The FDA has also removed two ingredients, which both Michele and Schlosser said are rarely if ever found in U.S. sunscreens anyway, from its list of approved chemicals — aminobenzoic acid (also known as PABA) and trolamine salicylate.

Chemical sunscreens are just one piece of a comprehensive sun protection plan if consumers are now wary about using them, according to Schlosser. “If people do have concerns,” she said, “they should lean toward sunscreens using the physical molecules,” like titanium dioxide and zinc oxide.

On top of that, the AAD and FDA both recommend staying out of direct sun from 10 a.m. to 2 p.m. and wearing protective clothing like hats, sunglasses and long-sleeved shirts.

Left: The FDA recommends a school-aged child on a beach vacation should use up at least an 8 ounce bottle of commercial broad-spectrum sunscreen over the course of a week. Image by Rido/Adobe