With every flush, a stream of data for these coronavirus trackers

When we think about COVID-19, we usually think of tracking the disease by testing people with long nasal swabs or by taking blood. But researchers are exploring another data source: the sample you flush down the toilet each day.

SARS-CoV-2 has been found in poop, raising some concerns about the possibility of stool being a source of infectious virus, especially if the toilet lid is up when you flush.

But that revelation is also helping officials monitor the waste stream as a population-level way of testing for SARS-CoV-2.

When rumblings of a novel coronavirus began in January, Rolf Halden was ready. A wastewater researcher at Arizona State University, Halden and his team had begun testing a way to track seasonal influenza through the sewers of the city of Tempe, Arizona. They knew they could help the city track the new virus, too.

“We quickly shifted from measuring the flu as our case study to monitoring SARS-CoV-2,” Halden said.

Researchers take a sample from a wastewater stream as it travels through sewers or enters a treatment facility, filter and prepare the sample, and then run it through a PCR machine to check for bits of genetic material from the virus.

It’s a similar process to testing a nasal swab sample, but instead of examining a single nose, scientists are sampling a community. Samples can’t be traced back to a specific toilet or individual, but researchers can start narrowing in on a geographical area where individuals are shedding the virus.

Halden had already produced a virtual dashboard for the City of Tempe that tracked various opioid metabolites in the wastewater stream. Once his team got the system calibrated for SARS-CoV-2 detection and started routinely monitoring concentrations in the municipal wastewater system in March, the city wanted a dashboard for that, too, Halden said. 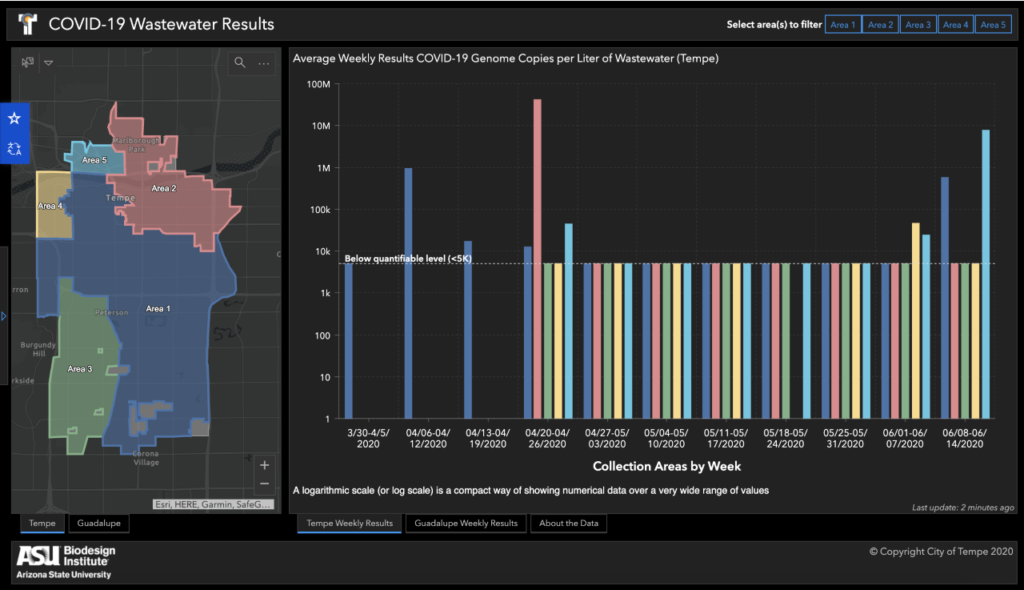 The City of Tempe’s dashboard tracking coronavirus in wastewater, developed by Halden’s team at ASU. Courtesy City of Tempe/ASU

The city’s fire department has added the wastewater data stream as a source for their emergency operations center, said Rosa Inchausti, who oversees strategic management for the City of Tempe. More broadly, the public dashboard helps demystify a nebulous crisis for the whole city.

“I wanted to bring the science to the living rooms of our community,” Inchausti said, adding that the public needs to know what data is guiding local regulations. “This is how we build trust.”

The connection between water systems and population health is not new.

Through much of the 19th century, people believed that diseases spread by bad air — or miasma — from rotten material. But in 1854, a doctor traced an outbreak of cholera in London to a specific sewage-contaminated water pump.

“John Snow and the cholera story with the pump, it’s the birth of epidemiology,” said Mariana Matus, CEO and co-founder of a wastewater epidemiology startup BioBot. 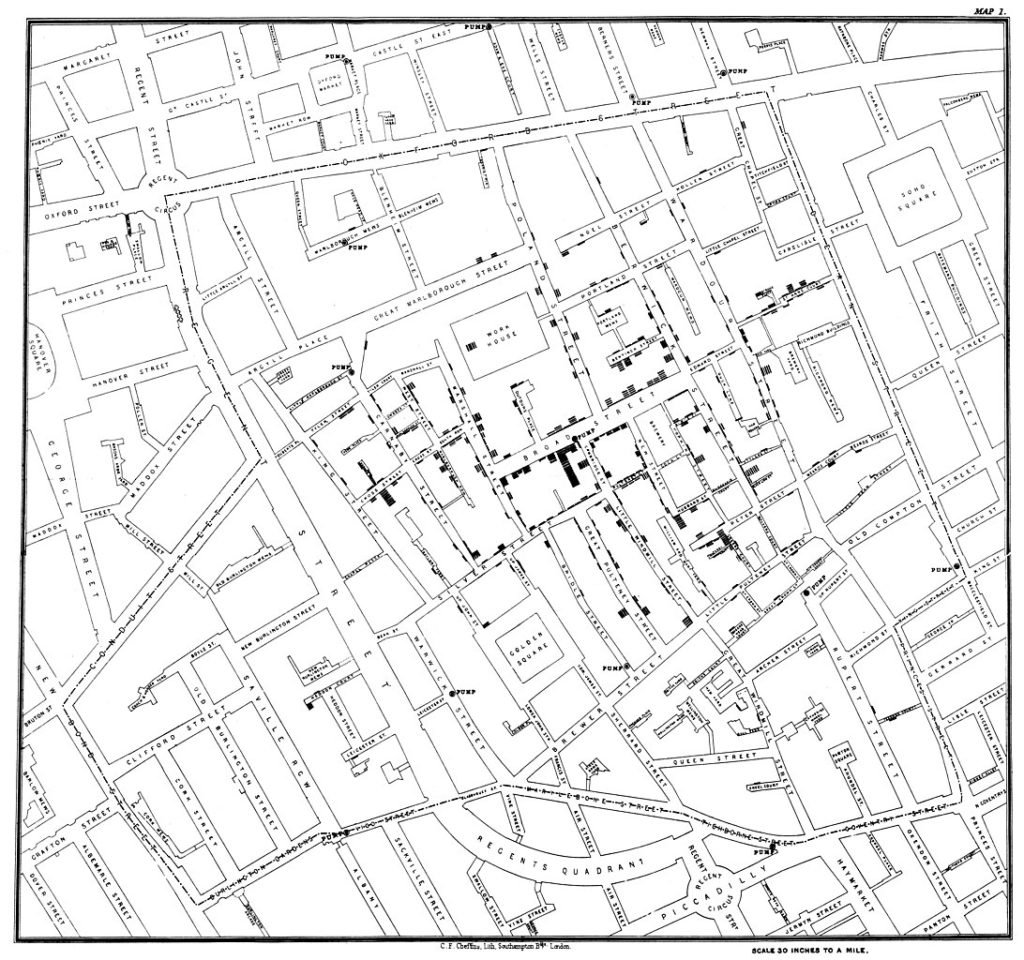 John Snow’s map of cholera cases in London in 1854, with cases in black clustering around the Broad Street water pump in the middle. Image via Wikimedia

Much like Halden, Matus is also providing wastewater-based epidemiological tracking of the coronavirus for wastewater systems that send in samples. One of BioBot’s earliest partners is a Massachusetts-based wastewater treatment plant. There, the data they’ve collected offers a snapshot of the rise and fall of cases in recent months.

“You start getting positives early March, same week as the first clinical cases were confirmed,” Mattus said. “The levels of the virus in the wastewater go up exponentially over the next few days to weeks until (Massachusetts) Gov. Baker issued the stay-at-home order. Then the levels level off and even start going down a bit.”

In Arizona, Halden noted that during the state’s stay-at-home order, virus levels in Tempe’s wastewater “declined down to levels below the detection limit.”

Beyond assessing the general prevalence of coronavirus in a community, and whether policy initiatives like lockdowns are working to contain it, wastewater-based epidemiology may also be useful as an early warning system for future COVID-19 outbreaks – like when the technique helped curb a 2013 outbreak of polio in Israel.

In a study from Yale University that has not yet been peer-reviewed, a team tested the concentrated solids in the New Haven, Connecticut, sewage system every day from March 19 to May 1 and correlated that to numbers of locally reported COVID-19 cases and hospitalization.

From the wastewater samples, “We were seeing the dynamics happen a full seven days before you’re seeing them show up in testing,” said Jordan Peccia, a Yale professor and first author of the study.

Considering that people with COVID-19 who are asymptomatic or presymptomatic can spread the virus, catching infection spikes via wastewater could give municipalities an early warning to brace for increases at hospitals or launch more stringent social distancing measures.

“If they’re shedding the virus in their stool from day one, we’re going to see it at the wastewater treatment plant just a few hours later, versus that seven-day lag,” Peccia said.

But in addition to genetic material that can help track diseases like SARS-CoV-2, wastewater contains lots of other components that may make it more difficult to extract relevant information, said Caitlyn Butler, a researcher at University of Massachusetts Amherst who develops bacterial biofilm-based wastewater treatment systems.

“What works for one wastewater community may not work for another, simply because of things like industrial waste waters that are also taken in by a wastewater treatment plant,” Butler said. “Those can impose different stressors on the assays that are used and can affect the interpretation of the results.”

Different chemical makeups of different wastewater samples could also require some tinkering with the PCR protocol.

“We kind of have to optimize our recipe, it’s like you’re making cookies. Today you need to make chocolate chip cookies. Tomorrow you need to make snickerdoodles or whatever. You have to modify and optimize your recipe to get it just perfect,” Butler said. “Quality controls within that recipe can really strengthen the interpretation of the data.”

Researchers who spoke to PBS NewsHour agreed there are plenty of unanswered questions about how the virus moves through wastewater systems – questions like the variability of shedding between individuals, how factors like temperature and distance traveled affect detectability of the virus, and how to more accurately estimate the number of infections from the measured amounts of genetic material. But more research will help answer these questions.

Halden – through his work at ASU, as well as with an affiliated company and nonprofit – is expanding testing to more areas, including the town of Guadalupe, which borders Tempe and feeds into that city’s wastewater system.

“We now have in the last week, 10 days, Guadalupe-specific numbers that unfortunately are higher than county averages,” said Jeff Kulaga, the town’s manager. The wastewater findings, which suggested a rising number of cases in the area, helped convince the town council during the first week of June to direct more funding toward coronavirus response resources, including staffing, equipment and masks, Kulaga said. 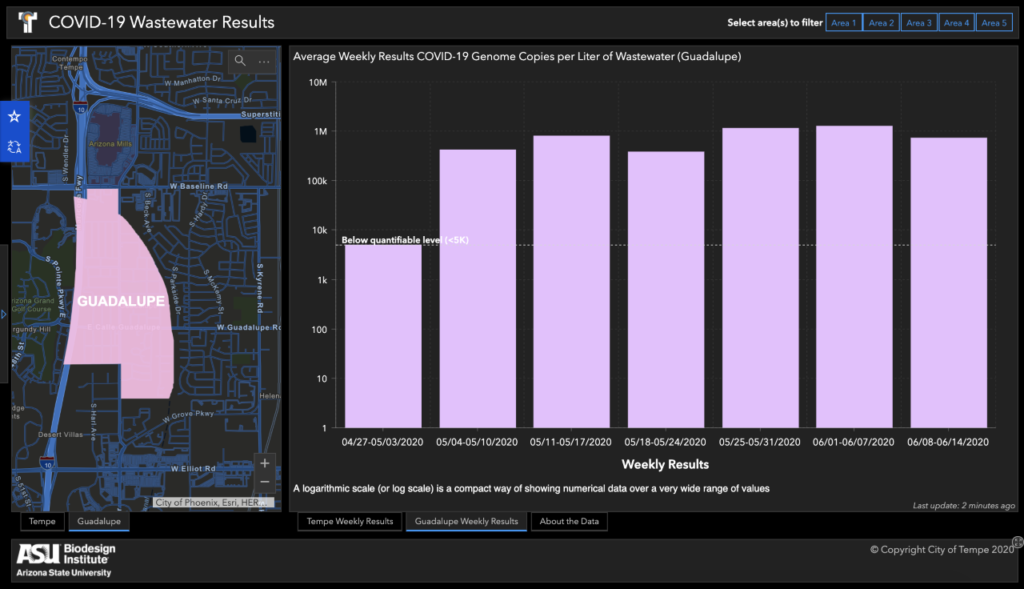 Matus said BioBot currently has over 400 municipalities across 42 states sending in samples, corresponding to about 10 percent of the U.S. population. But opportunities to use wastewater-based epidemiology as a tool against the pandemic doesn’t end at the border.

“We actually are going to be testing Mexico City’s wastewater,” Matus said, calling the technique “transformative for those areas that have even less resources for clinical testing and staying on top of the outbreak.”

“I think what we see is the much delayed advent of using wastewater-based epidemiology to inform public health and the protection of the health of the people, nationwide and globally,” Halden said.

But getting funding for this kind of work has been a challenge. “I have a stack of rejections of grant proposals that’s taller than me, and I’m 6-foot 4,” he said.