PEMBA, Mozambique — A second disaster unfolded on Sunday in northern Mozambique in the wake of Cyclone Kenneth as raging flood waters killed one person and began to cut off the region’s main city from the outside world. Some 160,000 people were at risk, with more torrential rain forecast for the days ahead.

“Help us, we are losing everything!” residents in Pemba city shouted at passing cars as the rushing waters poured into doorways. Women and girls with buckets and pots tried to scoop away the torrent, in vain. Some houses collapsed, the United Nations said. 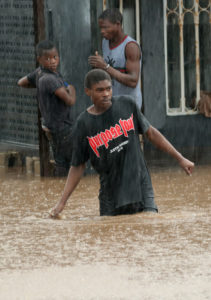 A man wades through floodwaters as rain falls in the aftermath of Cyclone Kenneth in Pemba, Mozambique, April 28, 2019. REUTERS/Mike Hutchings – RC1DFC19F260

This was the first time in recorded history that the southern African nation has been hit by two cyclones in one season, again raising concerns about climate change.

The new storm’s remnants could dump twice as much rain as Idai, the U.N. World Program has said. Up to 100 millimeters (nearly 4 inches) were forecast in the next 24 hours for some parts of the region, according to Mozambique’s meteorological institute.

“I have never seen such rains in my life,” said one Pemba resident, 35-year-old Michael Fernando.

Residents mourned one death in the Nitate neighborhood after a brick wall fell on a woman and the waters swept her against another building, said community leader Estenacio Pilale.

Other residents tried to pile up tires and sand-filled sacks as barricades. Cars began to slip under the waters.

Macomia district, in Cabo Delgado, was heavily affected by #CycloneKenneth, that made landfall on 25 April.

Many communities, as this one in Mucojo area, were completely destroyed. #Mozambique pic.twitter.com/WAjuLg7vAE

Water levels in Pemba, #Mozambique, continue to rise in a worrying way. Houses started to collapse in Natite neighbourhood, according to the rescue team operating there.

We are unfortunately expecting devastating floods as consequence of #CycloneKenneth pic.twitter.com/FKOdRf9wkG

“We will keep moving until we get somewhere safe,” one man said, as people fled carrying belongings in plastic bags. Others showed flashes of impatience. “Will this water ever give us a break?” Abdul Carimo asked. “The moment we try to do anything with our lives, it starts again.”

Authorities earlier said at least five people died after Kenneth roared in Thursday evening with the force of a Category 4 hurricane, stunning residents of a region where such a storm had not been recorded in the modern era.

The government said more than 160,000 people have been affected in the largely rural region, many now exposed and hungry. More than 35,000 homes in parts of Mozambique’s northernmost Cabo Delgado were partially or fully destroyed by the storm.

Aid workers trying to reach hard-hit communities outside Pemba on Sunday were forced to turn back by rivers that burst their banks, with flood waters reaching the roofs of nearby houses. It was not clear when aid to scores of thousands of people outside the city could be delivered.

“Helicopters cannot fly, a number of flights were canceled, so humanitarian workers cannot arrive and additional cargo cannot arrive by air,” Finney with Save the Children told The Associated Press. He was concerned that the main road to Nampula, an important trucking route, would soon be blocked.

He described “total devastation” affecting a 60-kilometer (37-mile) stretch of coastline and nearby islands.

On Saturday, aerial photos showed several coastal communities flattened by the cyclone. “Not a single house is standing anymore,” Saviano Abreu, a spokesman with the U.N. humanitarian agency, told reporters.

Livelihoods have been lost and people are wondering how they will cope in a country struggling with one of the world’s highest poverty rates.

With notebook and pen in hand, elderly Luis Momade walked near the beach in Pemba on Saturday, taking advantage of a rare lull in the rains to record the damage from the cyclone. The president of the local Paquite Residents Association, his notebook was almost full with names and figures of boats damaged or destroyed.

With unemployment rife and many in coastal areas surviving with fishing and related activities, not going to sea could mean going hungry for days.

Men, women and children foraged in the waters off the littered shore, looking for seashells to sell.

Left: A woman crosses a flooded street in the aftermath of Cyclone Kenneth in Pemba, Mozambique, April 28, 2019. Photo by Mike Hutchings/Reuters