CUCUTA, Colombia — Opponents of Venezuela President Nicolas Maduro braved tear gas as they rescued boxes of emergency food and medicine from burning trucks during violent clashes on the Colombian border with security forces blocking the entry of U.S.-supplied humanitarian aid.

The panicked scene Saturday on the binational Santander bridge was the dramatic high point of a day that also saw two people killed in unrest near Brazil, at least 23 soldiers switch loyalties to opposition leader Juan Guaido, and Maduro break off diplomatic relations with Colombia amid an increasingly unpredictable and unruly fight for power in the oil-rich South American nation.

For weeks, the opposition has been amassing aid on three of Venezuela’s borders with the aim of launching a “humanitarian avalanche” exactly one month after Guaido declared himself interim president at an outdoor rally in a direct challenge to Maduro’s rule.

Even as the 35-year-old lawmaker has won the backing of more than 50 governments around the world, he’s so far been unable to cause a major rift inside the military — the socialist leader’s last-remaining plank of support in a country ravaged by hyperinflation and widespread shortages.

“Our call to the armed forces couldn’t be clearer: put yourself on the right side of history,” Guaido said in an appeal to troops as he pulled himself onto a truck and shook hands with its driver during a ceremonial send-off of the aid convoy from the Colombian city of Cucuta. 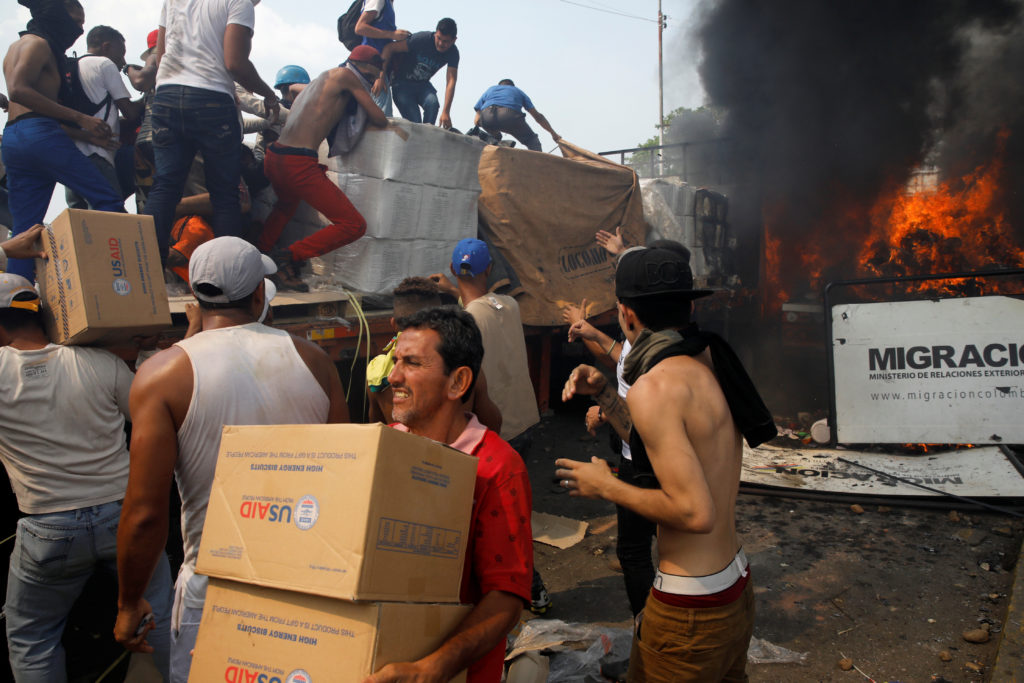 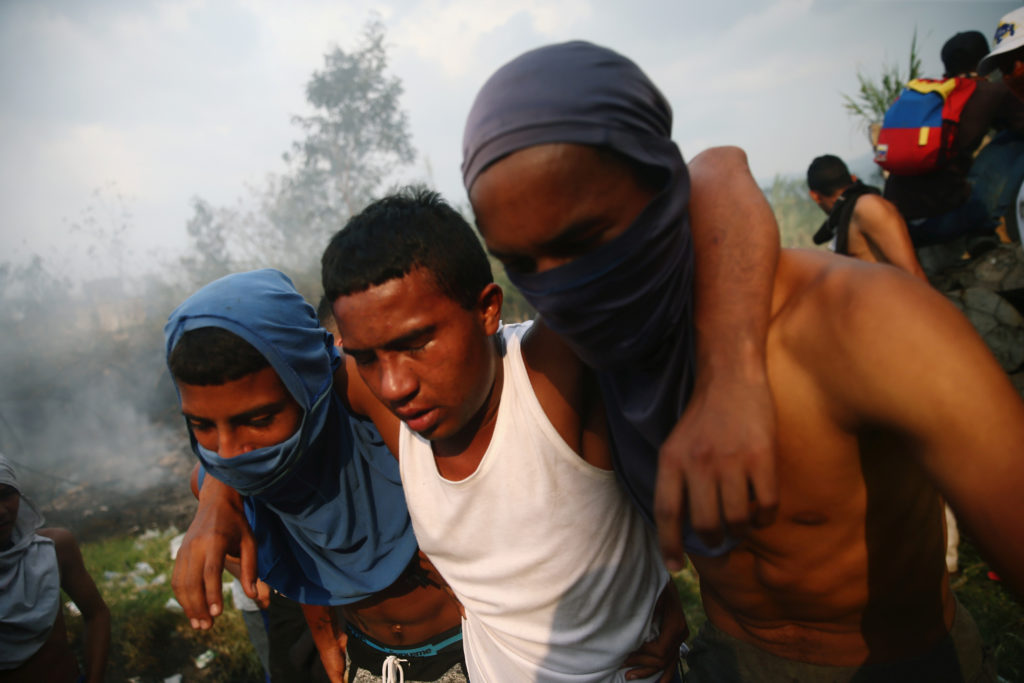 An injured demonstrator is being helped by others after clashing with Venezuela’s security forces at Simon Bolivar bridge on the border line between Colombia and Venezuela as seen from Cucuta, Colombia, February 23, 2019. Photo by Edgard Garrido/Reuters

But almost as soon as the aid convoy departed, the limitations of Guaido’s high-stakes gamble became clear.

At the Santander bridge, a group of activists led by exiled lawmakers managed to escort three flatbed trucks of aid past the halfway point into Venezuela when they were repelled by security forces firing tear gas and buckshot. In a flash the cargo caught fire, with some eyewitnesses claiming the National Guardsmen doused a tarp covering the boxes with gas before setting it on fire. With a black cloud rising above, the activists — protecting themselves from the fumes with vinegar-soaked cloths — unloaded the boxes by hand in a human chain stretching back to the Colombian side of the bridge.

“They burned the aid and fired on their own people,” said 39-year-old David Hernandez, who was hit in the forehead with a tear gas canister that left a bloody wound and growing welt. “That’s the definition of dictatorship.”

Second humanitarian aid truck is now on fire as well. The truck has exploded. #Venezuela pic.twitter.com/t74mEaYKQd

Video of the trucks arriving at the #Brazil–#Venezuela border.

Venezuelan armed forces continue to block the border. It remains to see if the indigenous tribes will force the army to let the aid in. #23feb #breaking pic.twitter.com/lbrG8uc1qp

He said he decided to join Saturday’s protest thinking of his father, who is dying from advanced bone cancer they can’t treat because of Venezuela’s shortages.

Amid the aid push, Maduro struck back, breaking diplomatic relations with Colombia, whose government he accuses of serving as a staging ground for a U.S.-led effort to oust him from power.

“My patience has run out,” Maduro said, speaking at a massive rally of red-shirted supporters in Caracas and giving Colombian diplomats 24 hours to leave the country. 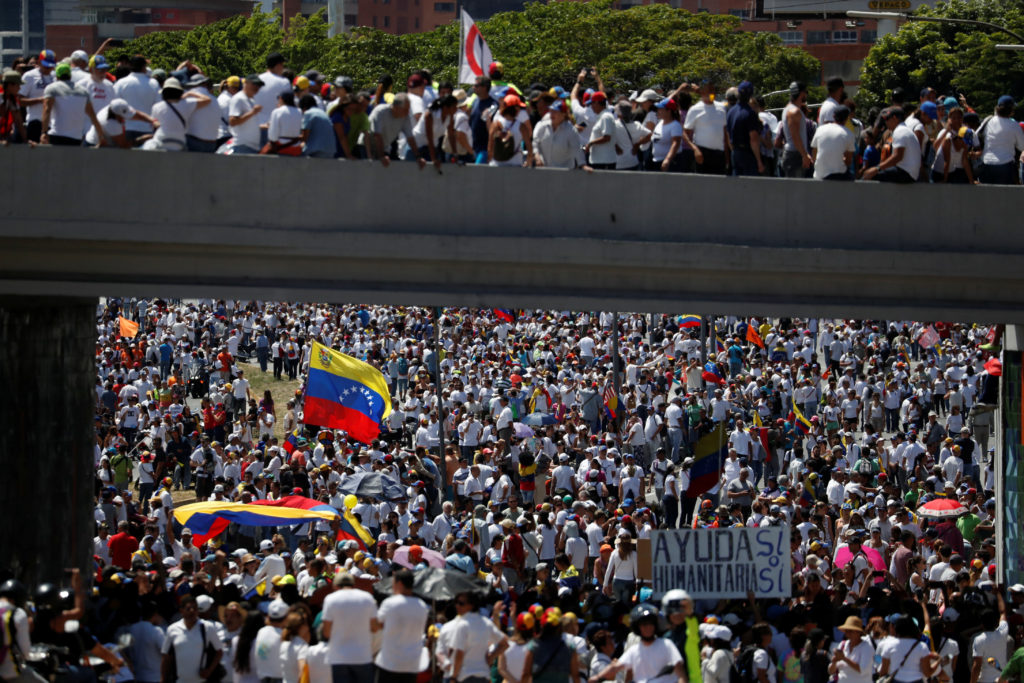 Supporters of the Venezuelan opposition leader Juan Guaido, who many nations have recognized as the country’s rightful interim ruler, take part in a rally to demand President Nicolas Maduro to allow humanitarian aid to enter the country, in Caracas, Venezuela February 23, 2019. Photo by Carlos Garcia Rawlins/Reuters

The clashes started at dawn in the Venezuelan border town of Urena, when residents began removing yellow metal barricades and barbed wire blocking the Santander bridge. Some of the protesters were masked youth who threw rocks and later commandeered a city bus and set it afire. At least two dozen people were injured in the disturbances, according to local health officials.

“We’re tired. There’s no work, nothing,” Andreina Montanez, 31, said as she sat on a curb recovering from the sting of tear gas used to disperse the crowd. 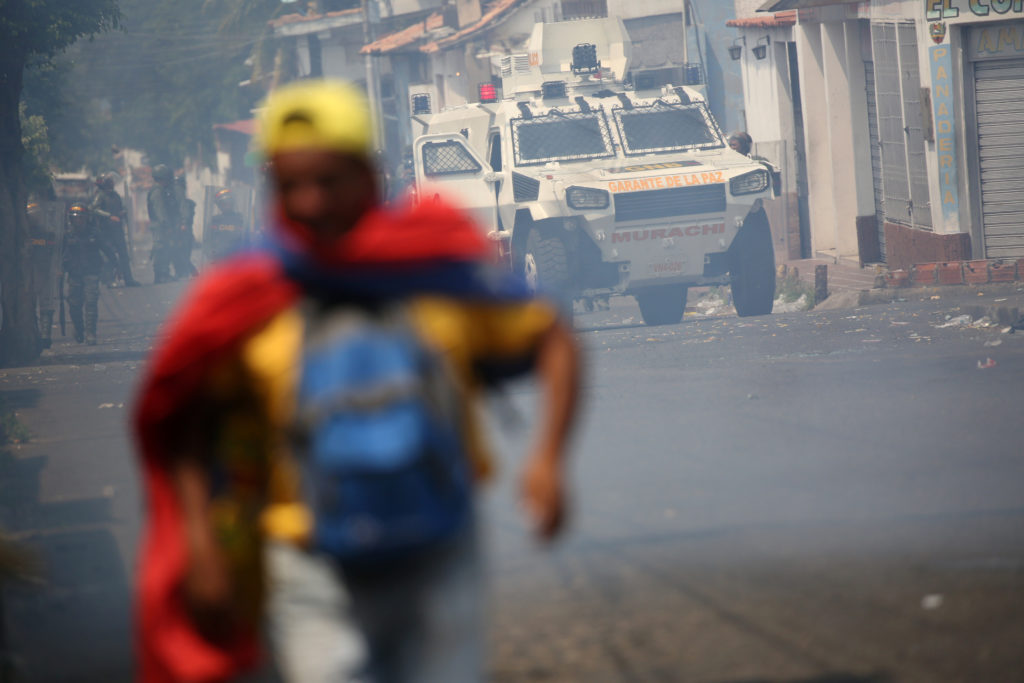 The single mom said she lost her job as a seamstress in December and had to console her 10-year-old daughter’s fears that she would be left orphaned when she decided to join Saturday’s protest.

“I told her I had to go out on the streets because there’s no bread,” she said. “But still, these soldiers are scary. It’s like they’re hunting us.”

At the Simon Bolivar bridge, a group of aid volunteers in blue vests calmly walked up to a police line and shook officers’ hands, appealing for them to join their fight.

But the goodwill was fleeting and a few hours later the volunteers were driven back with tear gas, triggering a chaotic stampede.

At least 23 members of the National Guard deserted the force and took refuge inside Colombia, according to migration officials.

A video provided by Colombian authorities shows three soldiers at the Simon Bolivar bridge wading through a crowd with their assault rifles and pistols held above their heads in a sign of surrender. The young soldiers were then ordered to lie face down on the ground as migration officials urged angry onlookers to keep a safe distance.

“I’ve spent days thinking about this,” said one of the soldiers, whose identity was not immediately known. He called on his comrades to join him: “There is a lot of discontent inside the forces, but also lots of fear.”

Guaido, who has offered amnesty to soldiers who join the opposition’s fight, applauded their bravery, saying it was a sign that support for Maduro was crumbling. Later, he greeted five of the military members, who in turn offered a salute, calling the opposition leader Venezuela’s “constitutional president” and their commander in chief.

“They aren’t deserters,” Guaido said. “They’ve decided to put themselves on the side of the people and the constitution…..The arrival of liberty and democracy to Venezuela can’t be detained.”

International leaders including U.N. Secretary-General Antonio Guterres are appealing for the sides to avoid violence.

But at least two people were killed and another 18 injured in the town of Santa Elena de Uairen, near the border with Brazil, according to local health officials. The town was also the site of deadly disturbances a day earlier when members of the indigenous Pemon tribe clashed with security forces.

The push comes on the heels of a giant concert organized by British billionaire Richard Branson aimed at pressuring Maduro to accept the aid. Tens of thousands of Venezuelans gathered in a field to hear pop stars like Juanes sing beneath a scorching sun. Guaido made a surprise appearance toward the end.

The opposition planned to hold three simultaneous aid pushes on Saturday. Aside from the events in Colombia, they also hope to get humanitarian assistance delivered by sea and through Venezuela’s remote border with Brazil, which the government of Maduro has ordered closed.

Amid the sometimes-chaotic and hard-to-verify flow of information, opposition lawmakers and Guaido said the first shipment of humanitarian aid had crossed into Venezuela from Brazil — although reports from the ground revealed that two trucks carrying the aid had only inched up to the border itself.

Dueling demonstrations also took place in the capital. Government opponents, one of them dressed like Captain America in a nod to the administration of U.S. President Donald Trump’s prominent role cornering Maduro, headed toward an air base. With the opposition mostly mobilized along the border, a much larger mass of red-shirted government supporters, some of them on motorcycles, filed downtown toward the presidential palace.

Venezuela’s military has served as the traditional arbiter of political disputes in the South American country, and in recent weeks, top leaders have pledged their unwavering loyalty to Maduro. However, many believe that lower-ranking troops who suffer from the same hardships as many other Venezuelans may be more inclined to now let the aid enter.

Opposition leaders are pushing forward in belief that whether Maduro lets the aid in or not, he will come out weakened. They also contend that if the military does allow the food and medical gear to pass, it will signify troops are now loyal to Guaido.

Analysts warn that there may be no clear victor and humanitarian groups have criticized the opposition as using the aid as a political weapon.

“I don’t know that anyone can give a timeline of when the dam might break, said Eric Farnsworth of the Council of the Americas and Americas Society, a Washington-based think tank. “And it’s quite possible that it won’t.”

Left: Demonstrators gesture while clashing with Venezuela's security forces at Simon Bolivar bridge on the border line between Colombia and Venezuela as seen from Cucuta, Colombia, February 23, 2019. Photo by Edgard Garrido/Reuters