RIO DE JANEIRO (AP) — Amid global concern about raging fires in the Amazon, Brazil’s government complained Thursday that it is being targeted in smear campaign by critics who contend President Jair Bolsonaro is not doing enough to curb widespread deforestation.

The threat to what some call “the lungs of the planet” has ignited a bitter dispute about who is to blame during the tenure of a leader who has described Brazil’s rainforest protections as an obstacle to economic development and who traded Twitter jabs on Thursday with France’s president over the fires.

French President Emmanuel Macron called the wildfires an international crisis and said the leaders of the Group of 7 nations should hold urgent discussions about them at their summit in France this weekend.

“Our house is burning. Literally. The Amazon rain forest — the lungs which produces 20% of our planet’s oxygen — is on fire,” Macron tweeted.

Bolsonaro fired back with his own tweet: “I regret that Macron seeks to make personal political gains in an internal matter for Brazil and other Amazonian countries. The sensationalist tone he used does nothing to solve the problem.” 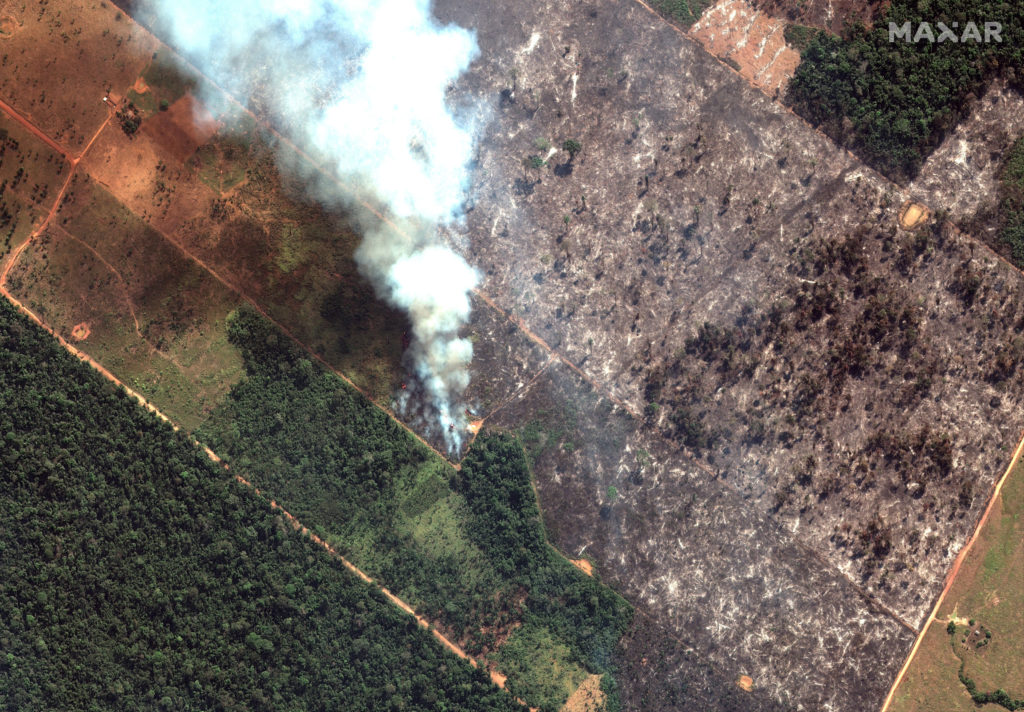 Onyx Lorenzoni, the president’s chief of staff, earlier in the day accused European countries of exaggerating environmental problems in Brazil in order to disrupt its commercial interests.

“There is deforestation in Brazil, yes, but not at the rate and level that they say,” said Lorenzoni, according to the Brazilian news website globo.com.

WATCH: Bolsonaro’s son says his father and Trump ‘do not care about the politically correct’

His allegation came after Germany and Norway, citing Brazil’s apparent lack of commitment to fighting deforestation, decided to withhold more than $60 million in funds earmarked for sustainability projects in Brazilian forests.

The debate came as Brazilian federal experts reported a record number of wildfires across the country this year, up 84 percent over the same period in 2018. Satellite images show smoke from the Amazon reaching across the Latin American continent to the Atlantic coast and Sao Paulo, Brazil’s biggest city, according to the World Meteorological Organization. 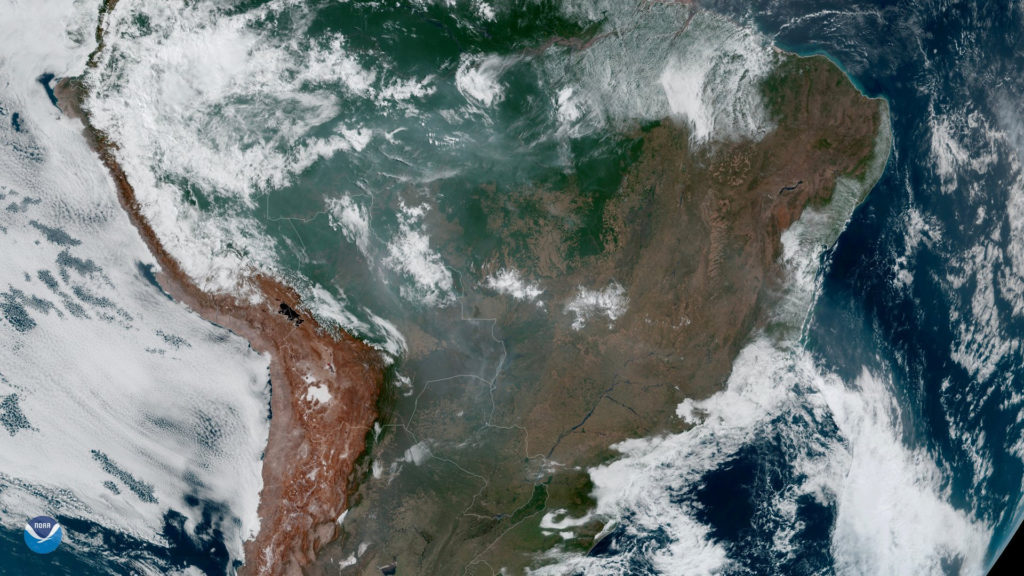 Fires, burning in the Amazon Rainforest, are pictured from space, captured by the geostationary weather satellite GOES-16 on August 21, 2019 in this handout image obtained from social media. Photo courtesy: NASA/NOAA/Handout via Reuters

U.N. Secretary-General António Guterres tweeted: “In the midst of the global climate crisis, we cannot afford more damage to a major source of oxygen and biodiversity. The Amazon must be protected.”

Federal prosecutors in Brazil’s Amazon region launched investigations of increasing deforestation, according to local media. Prosecutors said they plan to probe possible negligence by the national government in the enforcement of environmental codes.

Bolivia is also struggling to contain big fires, many believed to have been set by farmers clearing land for cultivation.

Bolsonaro said there was a “very strong” indication that some non-governmental groups could be setting blazes in retaliation for losing state funds under his administration. He did not provide any evidence.

“Most of the media wants Brazil to end up like Venezuela,” he said, referring to political and economic turbulence in the neighboring South American country.

London-based Amnesty International blamed the Brazilian government for the fires, which have escalated international concern over the vast rainforest that is a major absorber of carbon dioxide from the atmosphere.

The rights group this year documented illegal land invasions and arson attacks near indigenous territories in the Amazon, including Rondonia state, where many fires are raging, said Kumi Naidoo, Amnesty’s secretary general.

“Instead of spreading outrageous lies or denying the scale of deforestation taking place, we urge the president to take immediate action to halt the progress of these fires,” Naidoo said.

READ MORE: How the U.S.-China trade war could damage the Amazon rainforest

The WWF conservation group also challenged Bolsonaro’s allegations about NGOs, saying they divert “the focus of attention from what really matters: the well-being of nature and the people of the Amazon.”

Brazil contains about 60 percent of the Amazon rainforest, whose degradation could have severe consequences for global climate and rainfall. Bolsonaro, who has said he wants to convert land for cattle pastures and soybean farms, won office after channeling outrage over the corruption scandals of the former government.

Filipe Martins, an adviser to Bolsonaro, said on Twitter that the Brazilian government is committed to fighting illegal deforestation and that many other countries are causing environmental damage.

The Amazon will be saved by Brazil and not “the empty, hysterical and misleading rhetoric of the mainstream media, transnational bureaucrats and NGOs,” Martins said.

Sergio Bergman, Argentina’s environment minister, appealed for people to overcome political or ideological divisions to protect the environment. He spoke at a five-day U.N. workshop on climate change in Brazil’s northern state of Bahia.

“We all, in a way, understand that it is not possible to keep using natural resources without limits,” Bergman said.

Left: Smoke billows during a fire in an area of the Amazon rainforest near Humaita, Amazonas State, Brazil, August 17, 2019. Photo by Ueslei Marcelino/Reuters