Johnson says he will resist any Brexit delay beyond Oct. 31

LONDON — A defiant Prime Minister Boris Johnson said Saturday that he would resist attempts to delay Britain’s departure from the European Union beyond the end of the month, after Parliament postponed a decision on whether to back his Brexit deal and ordered the government to ask the EU for more time.

Johnson said he still aimed to meet the Oct. 31 deadline and would tell EU leaders that delaying Brexit is a bad idea. The bloc said it would wait to hear from the British government about what it wanted to do next. The government has until 11 p.m. Saturday to send a letter asking the EU for a three-month postponement.

“I will not negotiate a delay with the EU and neither does the law compel me to do so,” Johnson said. “I will tell our friends and colleagues in the EU exactly what I’ve told everyone in the last 88 days that I’ve served as prime minister: that further delay would be bad for this country, bad for the European Union and bad for democracy.”

French President Emmanuel Macron seemed to agree. Macron’s office said he spoke to Johnson by phone and insisted on the need for “quick clarification of the British position on the accord.” The president’s office said Macron indicated to the British prime minister that “a delay would be in no one’s interest.” 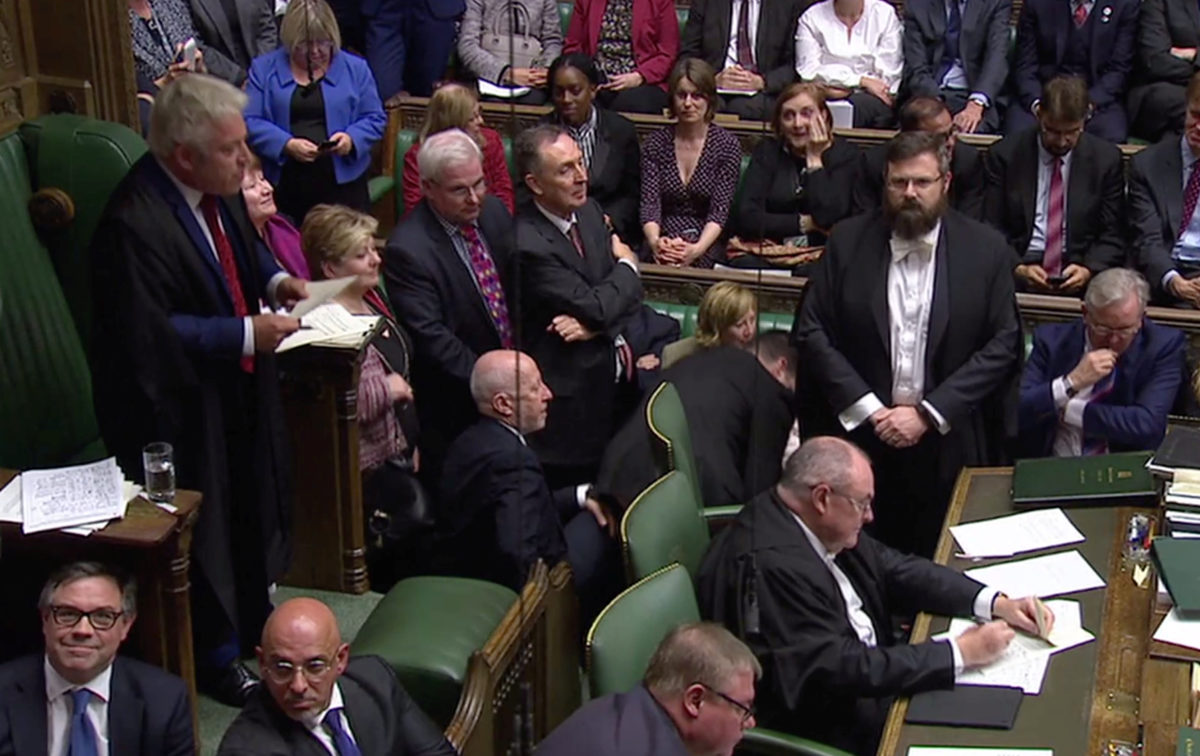 Speaker John Bercow announces the result of the vote on the deal delay at the House of Commons as parliament discusses Brexit, sitting on a Saturday for the first time since the 1982 Falklands War, in London, Britain, October 19, 2019, in this screen grab taken from video. Parliament TV via Reuters.

At a rare weekend sitting of Parliament, lawmakers voted 322-306 to withhold their approval of the Brexit deal until legislation to implement it has been passed.

The vote sought to ensure that the U.K. cannot crash out of the EU without a divorce deal on the scheduled departure date. Johnson, who struck the agreement with the EU earlier this week, said he was not “daunted or dismayed” by the result and would continue to do all he can to get Brexit done in less than two weeks.

Parliament’s first weekend sitting since the Falklands War of 1982 had been dubbed “Super Saturday.” It looked set to bring Britain’s Brexit saga to a head, more than three years after the country’s divisive decision to leave the EU.

But the government’s hopes were derailed when House of Commons Speaker John Bercow said he would allow a vote on an amendment to put the vote on the deal off until another day.

The amendment makes support for the deal conditional on passage of the legislation to implement it, something that could take several days or weeks. It also gives lawmakers another chance to scrutinize — and possibly change— the Brexit departure terms while the legislation is in Parliament. 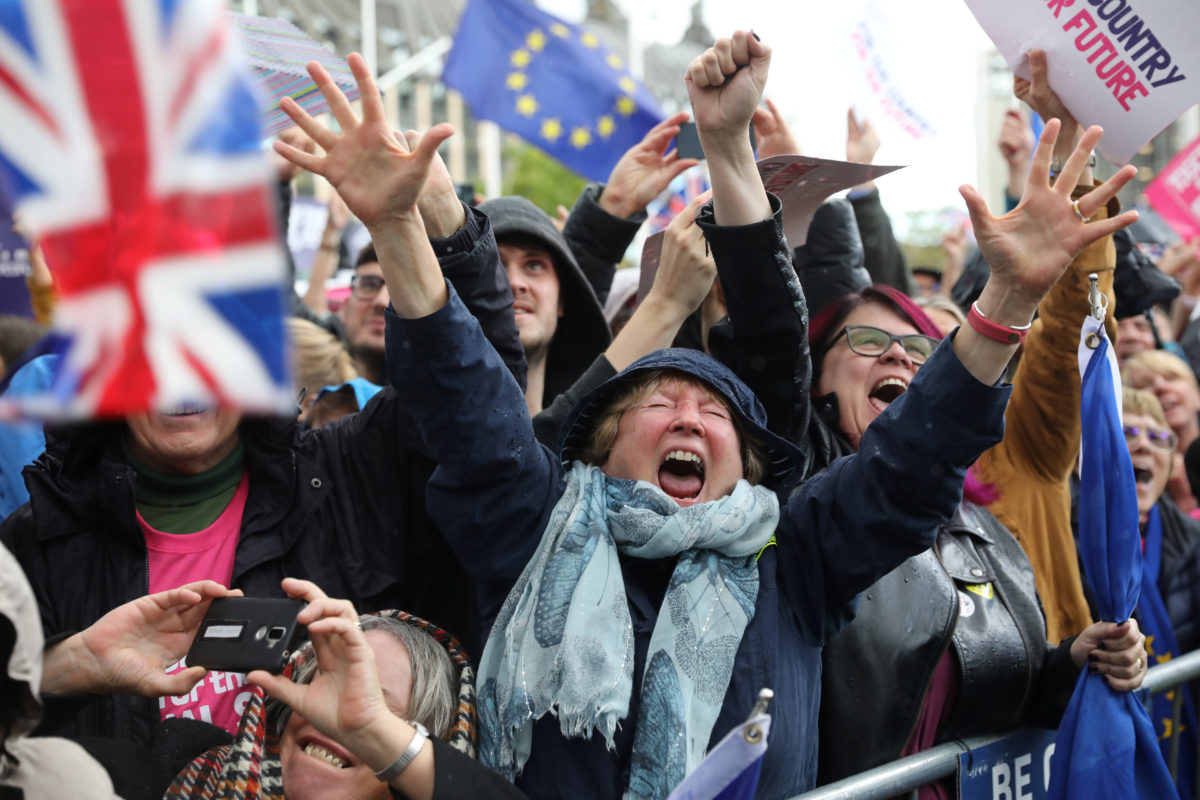 EU supporters react after the result of the vote on the deal delay was announced at the House of Commons on a Saturday for the first time since the 1982 Falklands War, to discuss Brexit in London, Britain, October 19, 2019. Photo by Simon Dawson/Reuters.

The government still hopes it can pass the needed legislation by the end of the month so the U.K. can leave on time.

The leader of the House of Commons, Jacob Rees-Mogg, said the government would hold a debate Monday on its Brexit-implementing legislation — effectively a second attempt to secure approval for the deal.

It’s unclear whether that would be allowed under House of Commons rules against holding repeated votes on the same question. Bercow said he would make a ruling Monday.

Despite Johnson’s vow not to “negotiate” a Brexit delay, the government has said it will comply with a law passed by Parliament last month ordering it to request an extension if a deal has not been approved by Saturday.

Opposition lawmakers warned that Johnson must ask for the Brexit extension or face legal consequences.

“Any failure of a prime minister who thinks he is above the law — well, prime minister, you’ll find yourself in court,” said Ian Blackford of the Scottish National Party.

The vote was welcomed by hundreds of thousands of anti-Brexit demonstrators who marched to Parliament Square, demanding a new referendum on whether Britain should leave the EU or remain. Protesters, many wearing blue berets emblazoned with yellow stars symbolizing the EU flag, poured out of subways and buses for the last-ditch effort.

“Another chance for sanity and perhaps rationality to take over, rather than emotion,” filmmaker Jove Lorenty said as he stood outside Parliament. “Never give up until the fat lady sings. No one knows what will happen, but we have hope.”

Johnson, who came to power in July vowing to get Brexit finished, called any delay to Britain’s departure pointless, expensive and deeply corrosive of public trust.” And he warned that the bloc’s approval could not be guaranteed.

“There is very little appetite among our friends in the EU for this business to be protracted by one extra day,” Johnson said. “They have had three and a half years of this debate.”

EU leaders have made the same point. Macron said Friday that “the Oct. 31 date must be respected. I don’t believe new delays should be granted.”

The EU was guarded in its response to Saturday’s vote.

“It will be for the U.K. government to inform us about the next steps as soon as possible,” EU Commission spokeswoman Mina Andreeva tweeted.

When push comes to shove, the EU seems likely to grant an extension if needed to avoid a disruptive no-deal Brexit.

Polish Prime Minister Mateusz Morawiecki said his country saw the vote as a delay, rather than a rejection of the Brexit deal. For EU leaders, avoiding a chaotic, no-deal Brexit should be the “top priority,” he said in a tweet.

And the European Parliament’s chief Brexit official, Guy Verhofstadt, noted that time was now tight to get the deal approved by the EU legislature before Oct. 31, meaning a short delay might be needed.

If Parliament approves the Withdrawal Agreement Bill in time, Britain could still leave by the end of October. The government plans to introduce the bill next week and could hold late-night sittings of Parliament in hope of getting it passed within days.

But Johnson must win over a fractious and divided Parliament, which three times rejected the Brexit plan negotiated by his predecessor Theresa May.

His hopes of getting the deal through Parliament were dealt a blow when his Northern Ireland ally, the Democratic Unionist Party, said it would not back him. The party says Johnson’s Brexit package — which carves out special status for Northern Ireland to keep an open border with EU member Ireland — is bad for the region and weakens its bonds with the rest of the U.K.

To make up for the votes of 10 DUP lawmakers, Johnson has tried to persuade members of the left-of-center Labour Party to support the deal. Late Friday, the government promised to bolster protections for the environment and workers’ rights to allay Labour fears that the Conservative government plans to slash those protections after Brexit.

“This deal is not good for jobs, damaging for industry and a threat to our environment and natural world,” he said. “Supporting the government this afternoon would merely fire the starting pistol in a race to the bottom in regulations and standards.”

Associated Press writers Gregory Katz in London, Elaine Ganley in Paris and Raf Casert in Brussels contributed to this story.

Left: Britain's Prime Minister Boris Johnson speaks during a debate on Brexit, as parliament sits on a Saturday for the first time since the 1982 Falklands War, in London, Britain October 19, 2019. Photo by Jessica Taylor/UK Parliament handout via Reuters.