BEIJING — China reported 143 virus deaths and a dip in new cases Saturday while the government announced new anti-disease measures as businesses reopen following sweeping controls that idled much of the economy.

Also Saturday, France reported Europe’s first death from the new virus, a Chinese tourist from Hubei province, where the disease emerged in December. Meanwhile, the United States was preparing to fly home Americans passengers quarantined aboard a cruise ship in Japan.

The number of new cases was down from the 5,090 in the previous 24-hour period after authorities changed the basis for counting patients.

Numbers of new cases have fluctuated, fueling optimism the disease might be under control and warnings such hopes are premature.

The government suspended most access to Wuhan, the city at the center of the outbreak, on Jan. 23. Restrictions have expanded to cities with a total of 60 million people in the broadest anti-disease measures ever imposed. Restaurants, shops and other businesses nationwide were ordered to close.

The Lunar New Year holiday was extended to keep factories and offices closed, but officials have been ordered to revive business activity as economic losses mount.

Authorities have announced measures to try to curb new infections as millions of workers crowd into planes, trains and buses to return to densely populated cities.

Under the new measures, people returning to Beijing will have to isolate themselves at home for 14 days, according to a notice published Friday. It said people who fail to comply will face legal consequences but gave no details.

A health official appealed to travelers to check themselves and report others who have symptoms.

“Before returning to school or work by train, road or plane, first judge your health status. Do you have a cold or fever?” said He Qinghua of the China Centers for Disease Control at a news conference.

COVID-19, a disease stemming from a new form of coronavirus, has spread to more than two dozen countries.

The 80-year-old Chinese tourist who died in France was hospitalized Jan. 25 with a lung infection, according to Health Minister Agnes Buzyn. His daughter also fell ill but authorities say she is expected to recover.

On Friday, Egypt reported the first infection on the African continent.

In Japan, the U.S. Embassy said it would fly home Americans aboard the cruise ship Diamond Princess in Yokohama, near Tokyo. It said they will go into quarantine in the United States. 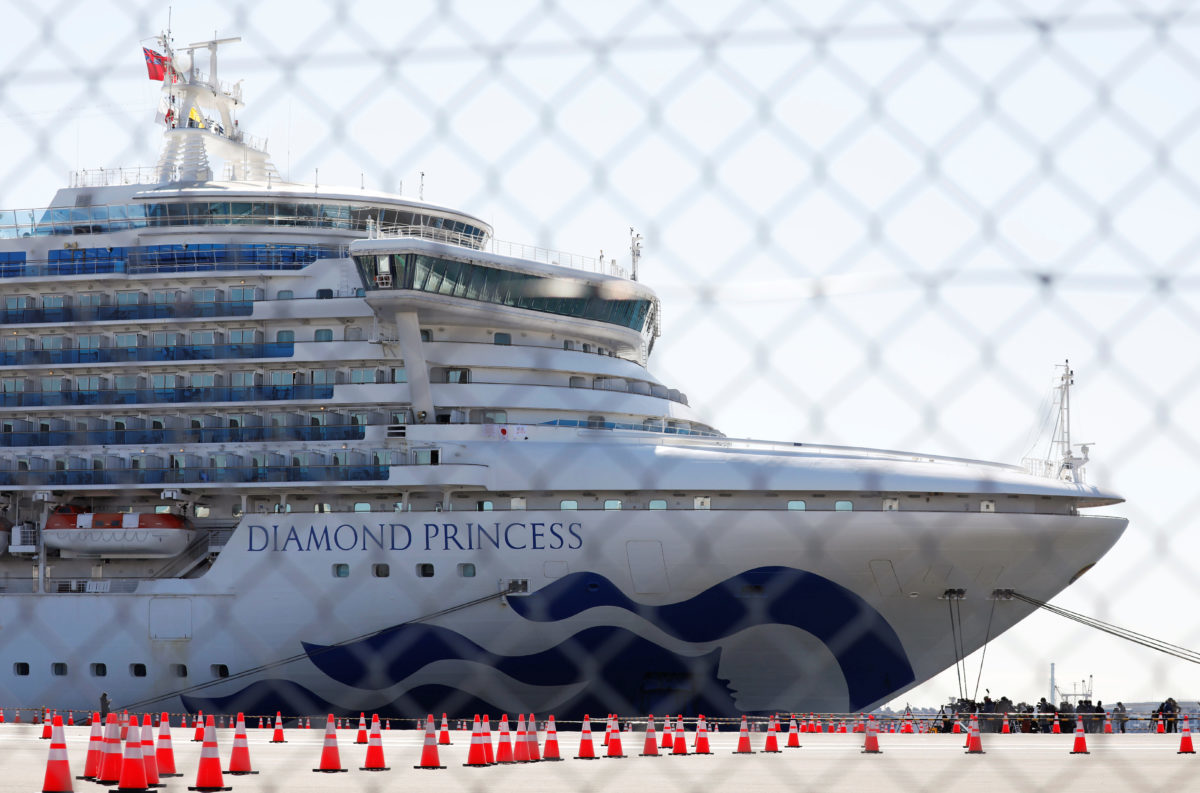 The cruise ship Diamond Princess, where dozens of passengers were tested positive for coronavirus, is seen through steel fence at Daikoku Pier Cruise Terminal in Yokohama, south of Tokyo, Japan, February 11, 2020. Photo by Issei Kato/Reuters.

Those who return to the U.S. will fly to Travis Air Force Base in California and some will fly onward to Lackland Air Force Base in Texas, said an embassy statement. It said no one with symptoms would be allowed aboard the flight.

So far, 285 people from the ship have tested positive for the virus. Japan’s Health Ministry allowed 11 passengers to disembark Friday. It said passengers above 80 years of age, those with underlying medical conditions and those who stayed in windowless cabins during the 14-day quarantine can move to a facility on shore.

On Thursday, the number of new cases reported by authorities in Hubei spiked to 15,152.

That included 13,332 that were diagnosed with doctors’ analyses and lung imaging instead of the previous standard of laboratory testing. Health authorities said the new method would facilitate earlier treatment.

Nine more temporary hospitals have opened in gymnasiums and other public buildings, with 6,960 beds in Hubei, the National Health Commission announced. It said they were treating 5,606 patients with mild symptoms.

The ruling Communist Party is trying to restore public confidence following complaints leaders in Wuhan suppressed information about the disease. The party faced similar criticism after the 2002-03 outbreak of severe acute respiratory syndrome, or SARS.

The party should “strengthen areas of weakness and close up loopholes” after the epidemic exposed “shortcomings and deficiencies,” President Xi Jinping said at a meeting of party leaders Friday, according to state media.

Extended closures of factories and businesses prevented a flood of travel after the Lunar New Year holiday, normally the Chinese industry’s busiest season, officials said at a news conference. 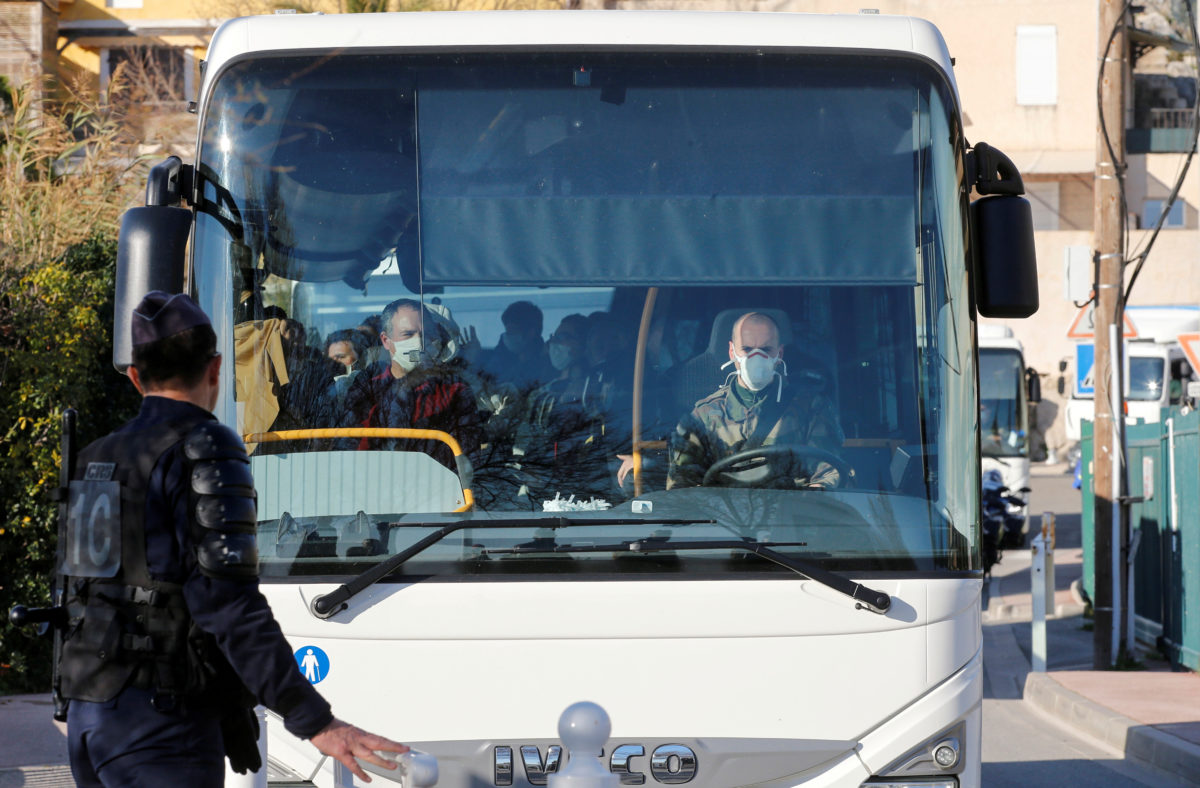 FILE PHOTO: French citizens are seen on a bus as they arrive at the accommodation where they will be quarantined as preventive measure in light of the coronavirus outbreak in China, after their evacuation from Wuhan area, in Carry le Rouet, near Marseille, France, January 31, 2020. REUTERS/Jean-Paul Pelissier/File Photo – RC280F9H01MY

Total volume of daily travelers is down 80% from last year, according to a deputy transportation minister, Liu Xiaoming.

“We believe there will be no peak passenger flow for return journeys,” said Liu.

Business losses are so severe that forecasters have cut their outlooks for China’s economic growth.

The state-owned banking industry has provided more than 537 billion yuan ($77 billion) in credit to industries such as retail, catering and tourism that have been hurt most, according to Liang Tao, vice chairman of the China Banking and Insurance Regulatory Commission.

Also this weekend, a team of World Health Organization experts were due to begin a mission in China.

A WHO official, speaking at a conference in Munich, defended China’s handling of the outbreak.

“Some of the rhetoric for me has not been helpful, not been helpful at all. China has a strong public health and health system,” said Dr. Michael Ryan, WHO’s chief of emergencies. “I think we as the global community need to change our narrative if we’re going to work successfully with China and other countries to stop this disease.”

In Indonesia, 285 men, women and children who flew home from Wuhan were released after a two-week quarantine on remote Natuna Island. The group included 47 flight crew members.

Left: Employees work on a production line manufacturing face masks at a factory, as the country is hit by an outbreak of the novel coronavirus, in Fuzhou, Fujian province, China February 15, 2020. Photo by cnsphoto via Reuters.