BEIJING (AP) — China has suspended or closed the social media accounts of more than 1,000 critics of the government’s policies on the COVID-19 outbreak, as the country moves to roll back harsh anti-virus restrictions.

The popular Sina Weibo social media platform said it had addressed 12,854 violations including attacks on experts, scholars and medical workers and issued temporary or permanent bans on 1,120 accounts.

The ruling Communist Party had largely relied on the medical community to justify its tough lockdowns, quarantine measures and mass testing, almost all of which it abruptly abandoned last month, leading to a surge in new cases that have stretched medical resources to their limits. The party allows no direct criticism and imposes strict limits on free speech.

The company “will continue to increase the investigation and cleanup of all kinds of illegal content, and create a harmonious and friendly community environment for the majority of users,” Sina Weibo said in a statement dated Thursday.

Criticism has largely focused on heavy-handed enforcement of regulations, including open-ended travel restrictions that saw people confined to their homes for weeks, sometimes sealed inside without adequate food or medical care. Anger was also vented over the requirement that anyone who potentially tested positive or had been in contact with such a person be confined for observation in a field hospital, where overcrowding, poor food and hygiene were commonly cited.

The social and economic costs eventually prompted rare street protests in Beijing and other cities, possibly influencing the party’s decision to swiftly ease the strictest measures.

As part of the latest changes, China will also no longer bring criminal charges against people accused of violating border quarantine regulations, according to a notice issued by five government departments on Saturday.

Individuals currently in custody will be released and seized assets returned, the notice said.

The adjustments “were made after comprehensively considering the harm of the behaviors to the society, and aim to adapt to the new situations of the epidemic prevention and control,” the official China Daily newspaper website said in a report on the notice.

China is now facing a surge in cases and hospitalizations in major cities and is bracing for a further spread into less developed areas with the start of the Lunar New Year travel rush, set to get underway in coming days. While international flights are still reduced, authorities say they expect domestic rail and air journeys will double over the same period last year, bringing overall numbers close to those of the 2019 holiday period before the pandemic hit. 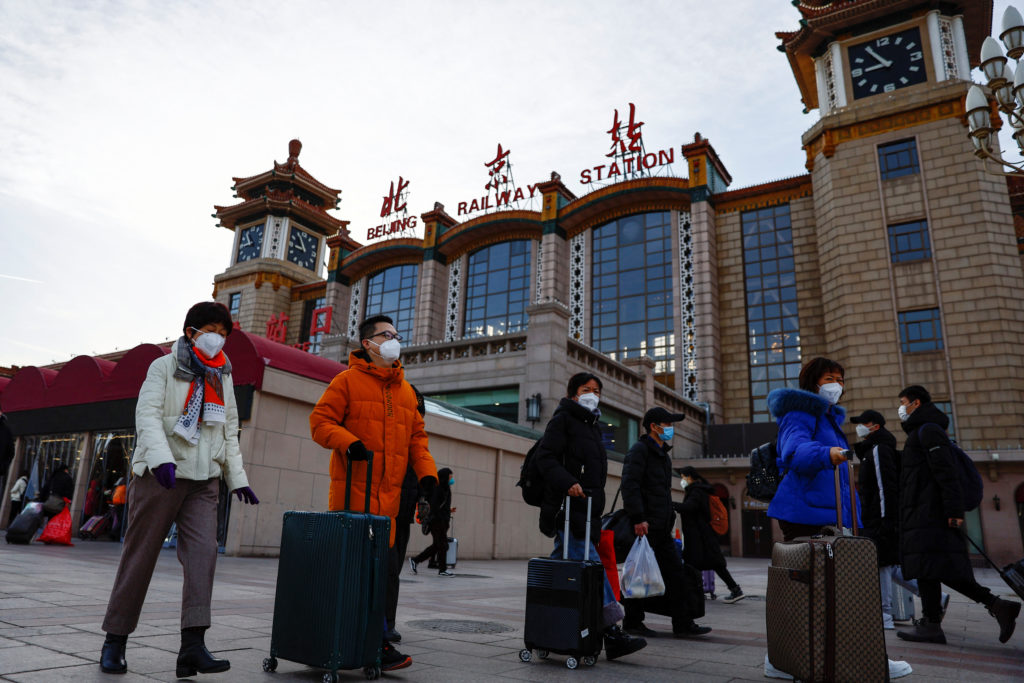 People walk outside Beijing Railway Station with their luggages as the annual Spring Festival travel rush starts, amid a COVID-19 outbreak ahead of the Chinese Lunar New Year, in Beijing, China, Jan. 7, 2023. Photo by Tingshu Wang/REUTERS

The Transportation Ministry on Friday called on travelers to reduce trips and gatherings, particularly if they involve elderly people, pregnant women, small children and those with underlying conditions.

Nonetheless, China is forging ahead with a plan to end mandatory quarantines for people arriving from abroad beginning on Sunday.

Beijing also plans to drop a requirement for students at city schools to have a negative COVID-19 test to enter campus when classes resume Feb. 13 after the holiday break. While schools will be allowed to move classes online in the event of new outbreaks, they must return to in-person instruction as soon as possible, the city education bureau said in a statement Friday.

However, the end to mass testing, a highly limited amount of basic data such as the number of deaths, infections and severe cases, and the potential emergence of new variants have prompted governments elsewhere to institute virus testing requirements for travelers from China.

The World Health Organization has also expressed concern about the lack of data from China, while the U.S. is requiring a negative test result for travelers from China within 48 hours of departure.

Chinese health authorities publish a daily count of new cases, severe cases and deaths, but those numbers include only officially confirmed cases and use a very narrow definition of COVID-related deaths.

Authorities say that since the government ended compulsory testing and permitted people with mild symptoms to test themselves and convalesce at home, it can no longer provide a full picture of the state of the latest outbreak.

On Saturday, the National Health Commission reported 10,681 new domestic cases, bringing the country’s total number of confirmed cases to 482,057. Three new deaths were also reported over the previous 24 hours, bringing the total to 5,267.

READ MORE: What we know about the COVID-19 data China is — and isn’t — sharing

The numbers are a fraction of those announced by the U.S., which has put its death toll at more than 1 million among some 101 million cases.

But they’re also much smaller than the estimates being released by some local governments. Zhejiang, a province on the east coast, said Tuesday it was seeing about 1 million new cases a day.

China has said the testing requirements being imposed by foreign governments — most recently Germany and Sweden — aren’t science-based and has threatened unspecified countermeasures. Its spokespeople have said the situation is under control, and reject accusations of a lack of preparation for reopening.

Despite such assertions, the Health Commission on Saturday rolled out regulations for strengthened monitoring of viral mutations, including testing of urban wastewater. The lengthy rules called for increased data gathering from hospitals and local government health departments and stepped-up checks on “pneumonia of unknown causes.”

If a variant emerges in an outbreak, it is found through genetic sequencing of the virus.

Since the pandemic started, China has shared 4,144 sequences with GISAID, a global platform for coronavirus data. That’s only 0.04% of its reported number of cases — a rate more than 100 times less than the United States and nearly four times less than neighboring Mongolia.

Meanwhile, Hong Kong also plans to reopen some of its border crossings with mainland China on Sunday and allow tens of thousands of people to cross every day without being quarantined.

The semi-autonomous southern Chinese city has been hard-hit by the virus and its land and sea border checkpoints with the mainland have been largely closed for almost three years. Despite the risk, the reopening is expected to provide a much-needed boost to Hong Kong’s tourism and retail sectors.

Left: A staff member pushes a cart carrying a body in a bag at a funeral home, as COVID-19 outbreaks continue in Shanghai, China, Jan. 4, 2023. Photo by Staff/REUTERS