Churches mostly empty for Orthodox Easter due to virus rules

MOSCOW — The holiest day of the year for Orthodox Christians was reserved and glum in many countries where churches were closed to worshipers for Easter services because of restrictions aimed at suppressing the spread of the coronavirus.

From Moscow to Addis Ababa, believers were either banned from attending Sunday services or urged to stay home and watch them on national television broadcasts.

In Georgia, where some churches remained open, some worshipers went through a long ordeal to attend services that began late Saturday night in order to conform with a nationwide curfew — arriving at churches before 9 p.m. and required to stay until 6 a.m.

Serbia’s curfew was even more strict, lasting 84 hours from Friday afternoon until Tuesday morning. The head of the Serbian Orthodox Church, Patriarch Irinej, held the Easter liturgy at midnight without believers but there were reports that some people entered churches to attend morning services. 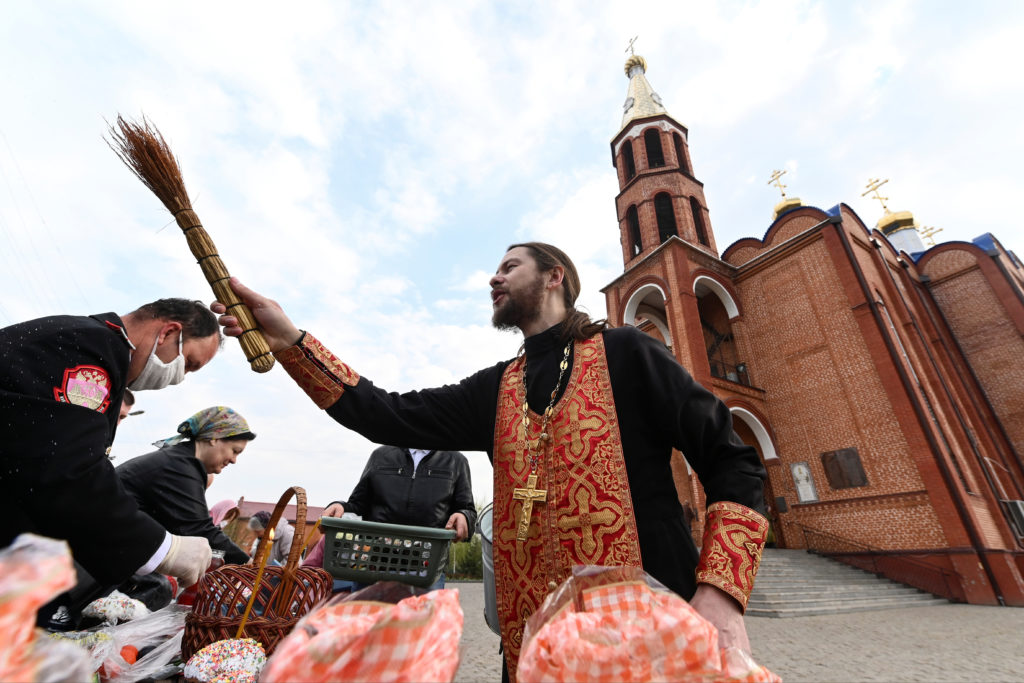 A priest sprinkles holy water on believers and their food during the Orthodox Easter celebrations amid the coronavirus disease (COVID-19) outbreak in the village of Leningradskaya in Krasnodar Region, Russia April 19, 2020. Photo by Sergey Pivovarov /Reuters.

Most churches in Russia were closed to the public, including Moscow’s Christ the Savior Cathedral, where the leader of the world’s largest Orthodox denomination, Patriarch Kirill, conducted the nighttime service in the presence only of other clerics, a choir and some church workers.

In a video Easter message from his residence, President Vladimir Putin called on Russians to bear up during all the new restrictions in the country, where coronavirus infections are rising sharply.

“There is no doubt that we will properly overcome the challenges that have confronted us,” he said. ”Our people often say: ‘God helps those who help themselves.’ And that is how we’re acting. But on this radiant holiday of Christ’s resurrection, I would still like to say: ‘All will be well, with God’s help.’”

Neighboring Belarus, which has imposed no restrictions on movement, was an exception to the muted Easter celebrations in other Orthodox countries. Hundreds of thousands attended services at churches throughout the country, including authoritarian President Alexander Lukashenko.

“As soon as this psychosis came, not even a disease, everyone rushed not to the church, but away from the church. It’s not good,″ he said Sunday.

Lukashenko has consistently dismissed concerns about the coronavirus pandemic, even though the number of infections reported in his country is not too far below neighboring Ukraine, which has four times as many people.

In Ukraine, the question of whether to attend services saw a split between the country’s two rival Orthodox denominations. 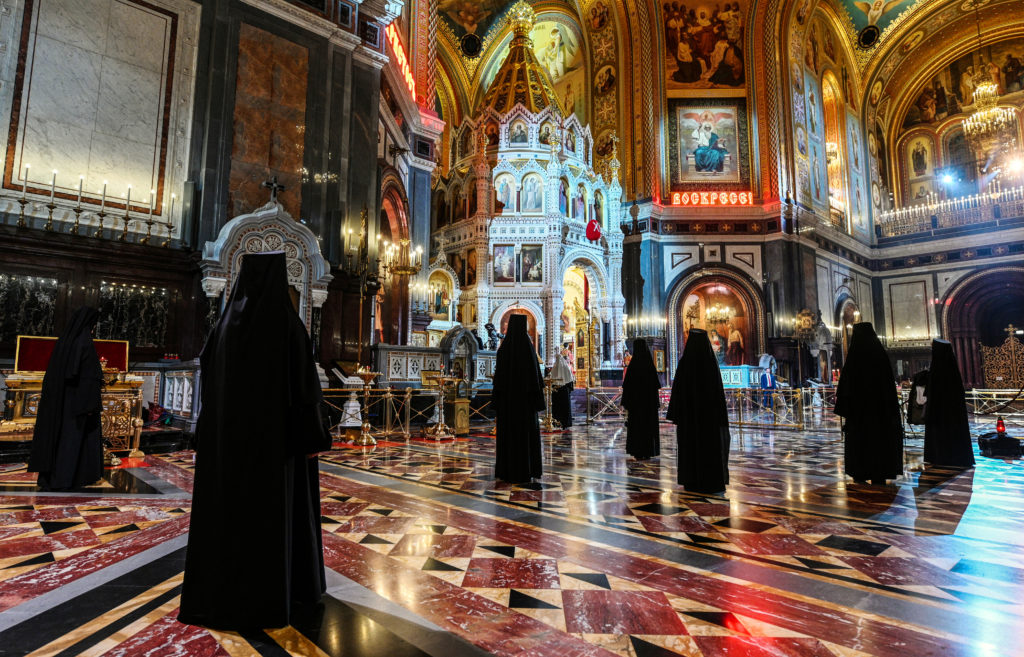 An interior view shows the Cathedral of Christ the Saviour during the Easter service conducted by Patriarch Kirill, head of Russia’s Orthodox Church, amid the coronavirus disease (COVID-19) outbreak in Moscow, Russia April 19, 2020. Photo by Patriarchal Press Service/Oleg Varov/Reuters.

Ukraine’s Interior Ministry said about 130,000 people nationwide attended services, although police limited the number of worshipers in a church to 10. Some of those were at the famed Pechersk Monastery in Kyiv, where more than 100 coronavirus infections including three deaths have been reported among the monks.

Services were broadcast live in Ethiopia, which has the largest Orthodox population outside Europe estimated at 46 million. Attendance at services was restricted and security was deployed at churches in the capital, Addis Ababa, to prevent gatherings. However, some churches in outside the capital held services, worrying health officials.

The Orthodox Autocephalous Church of Albania also broadcast midnight Mass from the Resurrection Cathedral in Tirana, the capital.