Clean up begins on Venezuela-Colombia border after unrest

Colombian President Ivan Duque reinforced security around two international bridges near the city of Cucuta and ordered them closed for 48 hours to allow for the clean-up effort.

He said that acts of “barbarism” committed by Maduro’s troops in blocking the delivery of humanitarian aid required a forceful international response — something that could come as early as Monday, when U.S. Vice President Mike Pence travels to the Colombian capital for an emergency summit on Venezuela with foreign ministers from more than a dozen mostly conservative Latin American and Caribbean states.

“They burned the aid and fired on their own people… That’s the definition of dictatorship.” -David Hernandez, who was hit in the forehead with a tear gas canister.

“Yesterday the dictatorship sealed its moral and diplomatic defeat before the eyes of the world,” said Duque after surveying damage on the Simon Bolivar bridge. Below the concrete roadway, a group of Venezuelan migrants were removing metal barriers normally used to guide foot traffic across the bridge that had been thrown into the Tachira river during Saturday’s mayhem. 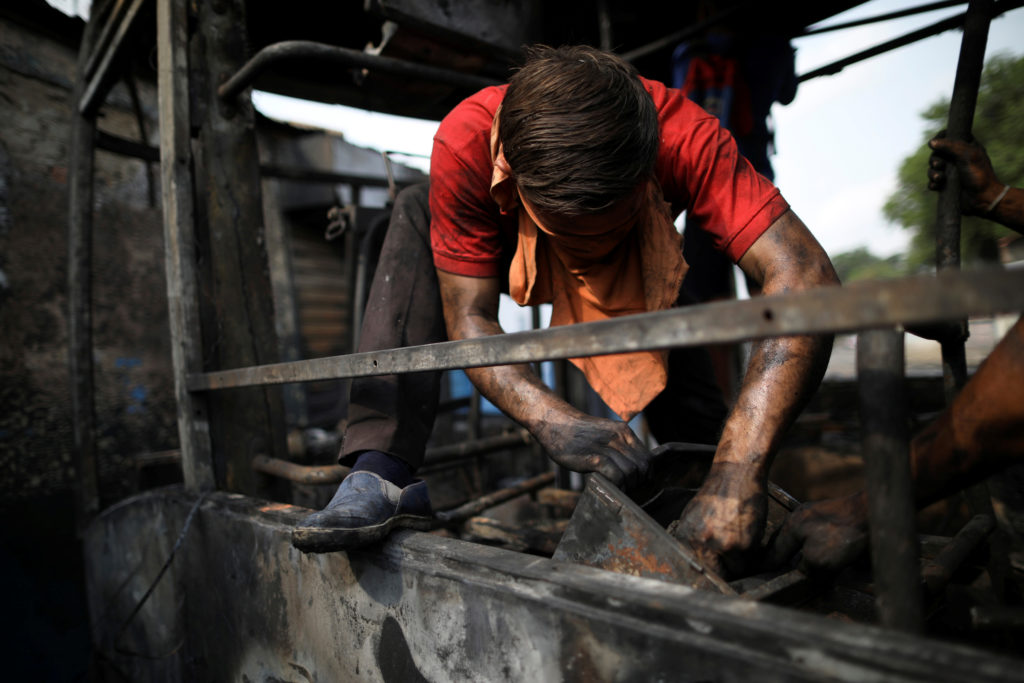 A man dismantles pieces in a bus that was burnt during clashes between opposition supporters and Venezuela’s security forces, in Urena, Venezuela February 24, 2019. Photo by Andres Martinez Casares/Reuters

Maduro is blocking the U.S.-backed aid that is meant to weaken his control over the country and to enhance the standing of opposition leader Juan Guaido, who is recognized by more than 50 countries as the nation’s legitimate ruler.

Across the border in Venezuela, few people were seen walking streets scattered with shattered glass and burnt trash. In the town of Urena, most businesses remained shuttered, fearing more violence from motorcycle-riding gunmen loyal to the government.

As night fell Saturday, Venezuelan opposition leader Juan Guaido refrained from asking supporters to continue risking their lives trying to break through the government’s barricades at the Colombian and Brazilian borders.

But he did make one last appeal to troops to let the aid in. He also urged the international community to keep “all options open” in the fight to oust Maduro , echoing comments from the Trump administration, which has hinted it may be prepared to use military force.

“How many of you national guardsmen have a sick mother? How many have kids in school without food,” he said, standing alongside a warehouse in the Colombian city of Cucuta where 600 tons of mostly U.S.-supplied boxes of food and medicine have been stockpiled. “You don’t owe any obedience to a sadist … who celebrates the denial of humanitarian aid the country needs.” 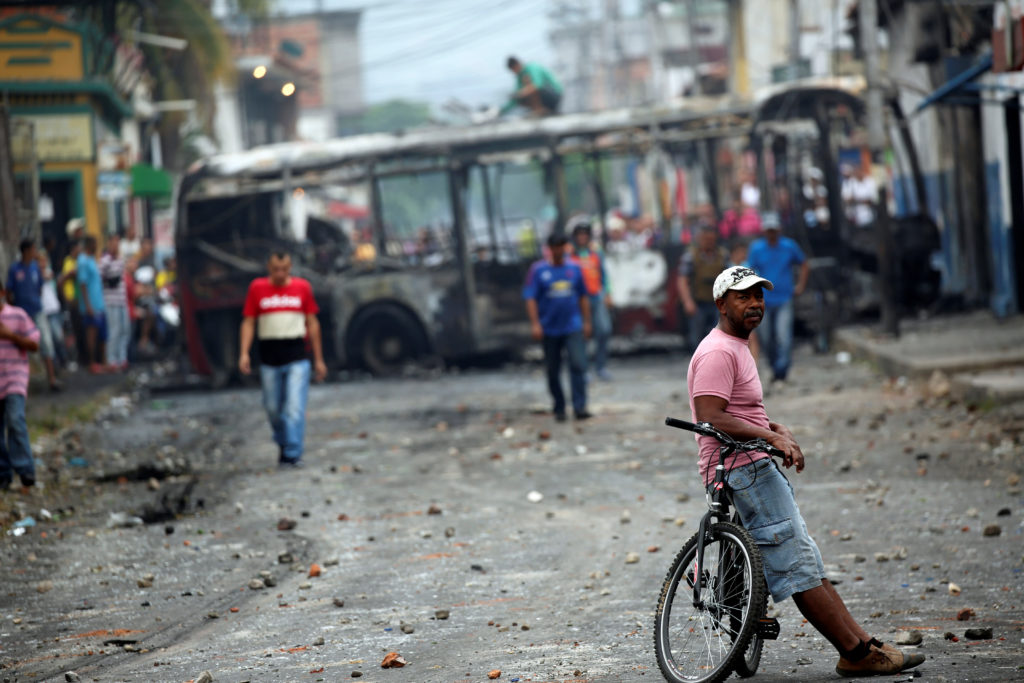 People walk near the remains of a bus burnt during clashes between opposition supporters and Venezuela’s security forces, in Urena, Venezuela February 24, 2019. Photo by Andres Martinez Casares/Reuters

Earlier, Maduro, who considers the aid part of a coup plot and has refused to let it in, struck a defiant tone, breaking diplomatic relations with Colombia, accusing its “fascist” government of serving as a staging ground for a U.S.-led effort to oust him from power and possibly a military invasion.

“My patience has run out,” Maduro said, speaking at a rally of red-shirted supporters in Caracas and giving Colombian diplomats 24 hours to leave the country.

Throughout a turbulent Saturday, as police and protesters squared off on two bridges connecting Venezuela to Colombia, Guaido made repeated calls for the military to join him in the fight against Maduro’s “dictatorship.” Colombian authorities said more than 60 soldiers answered his call and deserted their posts, though most were lower in rank and didn’t appear to dent the higher command’s continued loyalty to Maduro’s socialist government.

At one point, a group of activists led by exiled lawmakers managed to escort three flatbed trucks of aid past the halfway point into Venezuela, but they were repelled by security forces. In a flash the cargo caught fire, with some eyewitnesses claiming the National Guardsmen doused a tarp covering the boxes with gas before setting it on fire. As a black cloud rose above, the activists — protecting their faces from the fumes with vinegar-soaked cloths — unloaded the boxes by hand in a human chain stretching back to the Colombian side of the bridge.

"The scene is at the border in #Venezuela, as police start to fire tear gas canisters and shoot rubber bullets at civilians. The so-called US humanitarian aid was designed to provoke, and it did. pic.twitter.com/isO8YXcfwJ

“They burned the aid and fired on their own people,” said 39-year-old David Hernandez, who was hit in the forehead with a tear gas canister that left a bloody wound and growing welt. “That’s the definition of dictatorship.”

For weeks, U.S. President Donald Trump’s administration and its regional allies have been amassing emergency food and medical supplies on three of Venezuela’s borders with the aim of launching a “humanitarian avalanche.” It comes exactly one month after Guaido, in a direct challenge to Maduro’s rule, declared himself interim president at an outdoor rally.

The 35-year-old lawmaker has won the backing of more than 50 governments around the world, but he’s so far been unable to cause a major rift inside the military — Maduro’s most important remaining plank of support in a country ravaged by hyperinflation and widespread shortages.

At least 60 members of security forces, most of them lower-ranked soldiers, deserted and took refuge inside Colombia, according to migration officials. One was a National Guard major. Colombian officials said 285 people were injured, most left with wounds caused by tear gas and metal pellets that Venezuelan security forces fired. 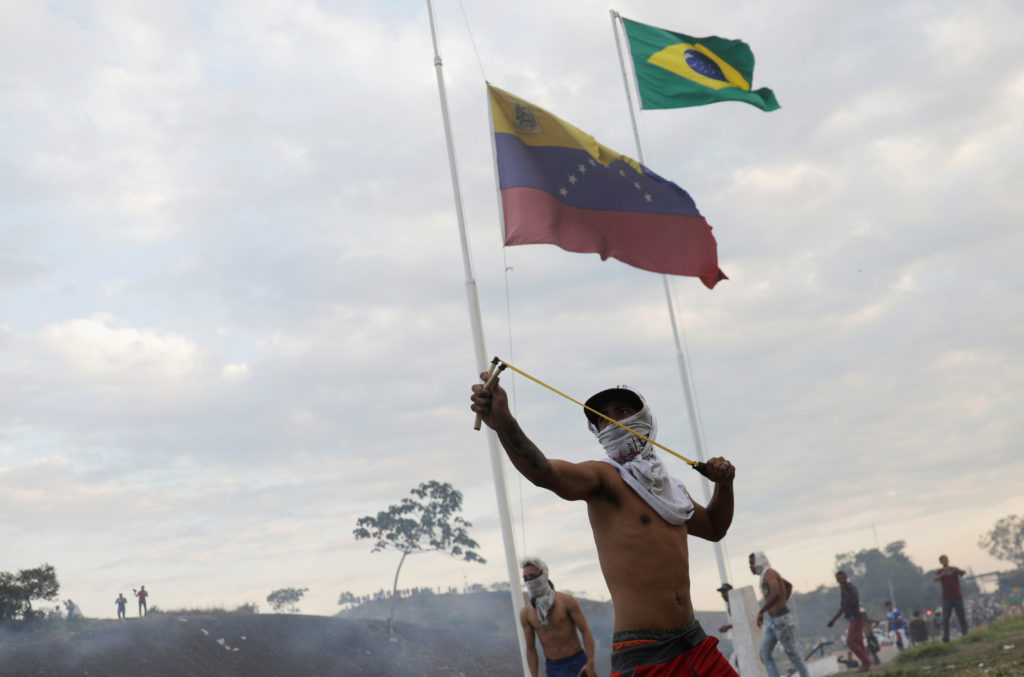 A protester uses a slingshot during clashes with Venezuelan soldiers along the border between Venezuela and Brazil in Pacaraima, Brazil February 23, 2019. Photo by Ricardo Moraes

A video provided by Colombian authorities showed three soldiers at the Simon Bolivar bridge wading through a crowd with their assault rifles and pistols held above their heads in a sign of surrender. The young soldiers were then ordered to lie face down on the ground as migration officials urged angry onlookers to keep a safe distance.

“I’ve spent days thinking about this,” said one of the soldiers, whose identity was not immediately known. He called on his comrades to join him: “There is a lot of discontent inside the forces, but also lots of fear.”

Guaido, who has offered amnesty to soldiers who join the opposition’s fight, applauded their bravery, saying it was a sign that support for Maduro was crumbling. Later, he greeted five of the military members, who in turn offered a salute, calling the opposition leader Venezuela’s “constitutional president” and their commander in chief.

“They aren’t deserters,” Guaido said. “They’ve decided to put themselves on the side of the people and the constitution. … The arrival of liberty and democracy to Venezuela can’t be detained.”

Analysts say that there may be no clear victor and humanitarian groups have criticized the opposition as using the aid as a political weapon.

“Today marked a further blow to the Maduro regime, but perhaps not the final blow that Guaido, the U.S. and Colombia were hoping for,” said Michael Shifter, president of the Inter-American Dialogue in Washington. “Threats and ultimatums from Washington directed to the generals may not be the best way to get them to flip. In fact, they are likely to have the opposite effect.”

International leaders including U.N. Secretary-General Antonio Guterres are appealing for the sides to avoid violence. But at least two people were killed and another 21 injured in the town of Santa Elena de Uairen, near the border with Brazil, according to local health officials.

Late Saturday, Guaido tweeted that the day’s events had obliged him to “propose in a formal manner to the international community that we keep all options open to liberate this country which struggles and will keep on struggling.”

Left: A burnt truck, that was used to transport humanitarian aid, is seen on the Francisco de Paula Santander cross-border bridge between Colombia and Venezuela, after clashes with opposition supporters and Venezuela's security forces, in Cucuta, Colombia February 24, 2019. Photo by Edgard Garrido/Reuters