In Berlin, around 1,000 people blocked the Grosser Stern, a traffic circle in the middle of the German capital’s Tiergarten park dominated by the landmark Victory Column. That protest began before dawn.

Members of Extinction Rebellion over the weekend set up a tent camp outside Chancellor Angela Merkel’s office to prepare for the protests, reflecting dissatisfaction with a climate policy package drawn up last month by her government.

Demonstrators playing steel drums marched through central London as they kicked off two weeks of activities designed to disrupt the city. 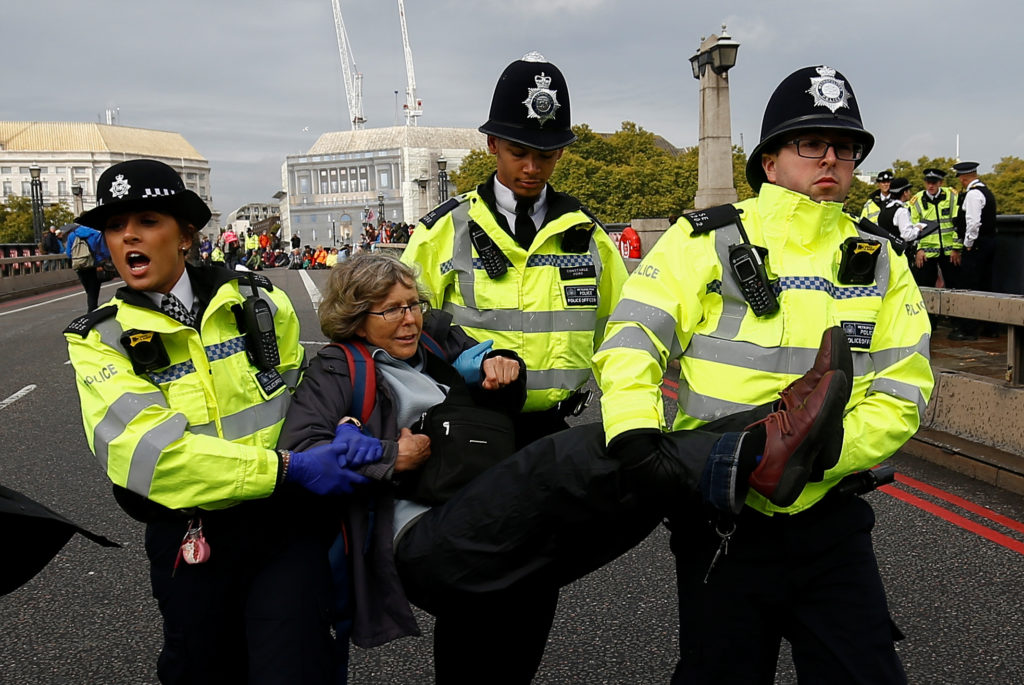 London police said some 135 climate activists had been arrested. Extinction Rebellion said protesters from the XR Peace group were arrested as they blocked Victoria Embankment, outside the Ministry of Defense.

Among those arrested was 81-year-old Sarah Lasenby, a retired social worker from Oxford.

“It is imperative the government should take serious actions and put pressure on other states and global powers to radically reduce the use of fossil fuels,” she said.

In Amsterdam, hundreds of demonstrators blocked a major road outside the Rijksmuseum, one of the city’s most popular tourist attractions, and set up tents. The protest went ahead despite a city ban on activists gathering on the road. The protesters ignored police calls for them to move to a nearby square.

In Spain, a few dozen activists briefly chained themselves to each other and to an elevated road over a major artery in the Madrid, snarling traffic during the morning rush hour. The National Police said 33 activists were taken to their premises and three were arrested for resisting orders by anti-riot officers. 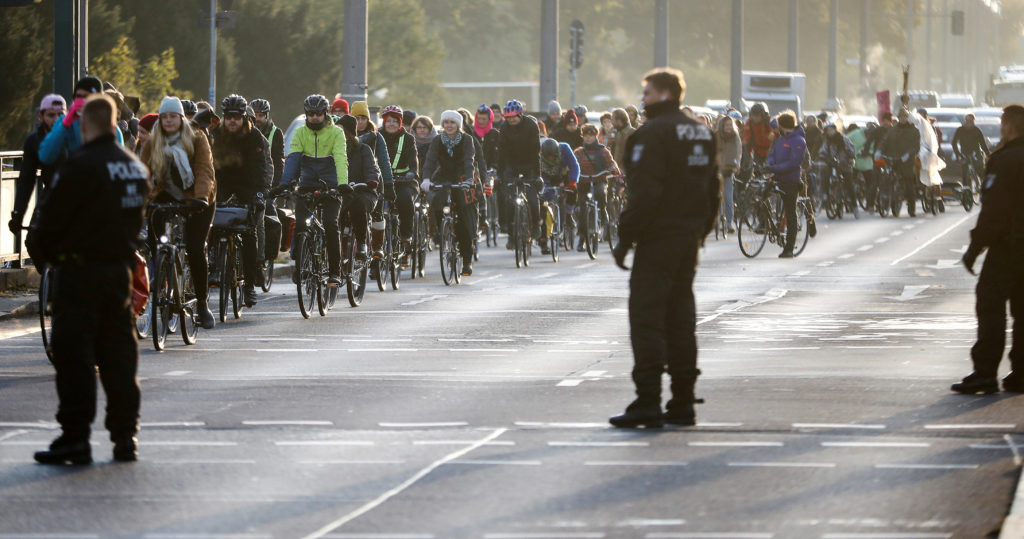 Climate activists and supporters of the group Extinction Rebellion attend a bicycle parade in a first wave of “civil disobedience” in Berlin, Germany, October 7, 2019. Photo by Hannibal Hanschke/Reuters

A few hundred other protesters camped out in 40 tents at the gates of Spain’s Ministry of Ecological Transition.

Those at the Berlin protests included activist Carola Rackete, best known as the German captain of a humanitarian rescue ship who was arrested for docking in an Italian port without authorization this year to disembark migrants rescued at sea.

“We must stay here and rebel until the government proclaims an ecological emergency and acts accordingly,” Rackete said.

Founded in Britain last year, Extinction Rebellion, also known as XR, now has chapters in some 50 countries. The group said the protests Monday were taking place in 60 cities worldwide.

“We all share an interest in climate protection, and the Paris climate targets are our standard in this,” he told ZDF television. “If you demonstrate against or for that, that is OK. But if you announce dangerous interventions in road traffic or things like this, of course that is just not on.”

He dismissed the idea of declaring a “climate emergency,” saying that the German constitution doesn’t provide for such a thing and it doesn’t translate into “concrete action.”

Mike Corder in The Hague, Netherlands, Danica Kirka in London, David Rising in Berlin and Aritz Parra in Madrid contributed to this report.

As Europe braces for Brexit, the Netherlands sees benefits