How much does it cost to eat dinner at the 10 best restaurants in the world?

If he was blown away by a $5 milkshake, imagine how Vincent Vega would react to a $225 tasting menu. I can almost hear John Travolta’s character from 1994’s “Pulp Fiction”: “House smoked sturgeon in a glass dome with caviar tastes gooood.”

It should, because it was prepared by one of the best chefs in the world, at the best restaurant in America, according to the latest list of the top 50 restaurants compiled by an international panel of experts. The list, which came out earlier this week, is dominated by European restaurants. Only six American eateries made the cut, including Eleven Madison Park, which led the American contingent at No. 5, with chef Daniel Humm taking home this year’s Chef’s Choice Award.

Spain’s El Celler de Can Roca topped the list. According to the list’s official website, El Celler’s standout dish is mackerel with pickles and mullet roe.

Two restaurants by American chef Thomas Keller are featured: at No. 50, The French Laundry, his landmark Napa Valley bistro, and at No. 40, New York’s Per Se. Also in New York, Le Bernardin grabbed the No. 18 spot, Chicago’s Alinea came in at No. 26, and the Hudson River Valley’s Blue Hill at Stone Barns was No. 49.

The panel of 972 judges are food journalists and chefs from around the world. Each judge casts seven votes for their “favorite restaurants that they have dined in during the last 18 months.”

Before you make your reservations, take a quick tour of the Top 10 restaurants and see how much a typical tasting menu will set you back. 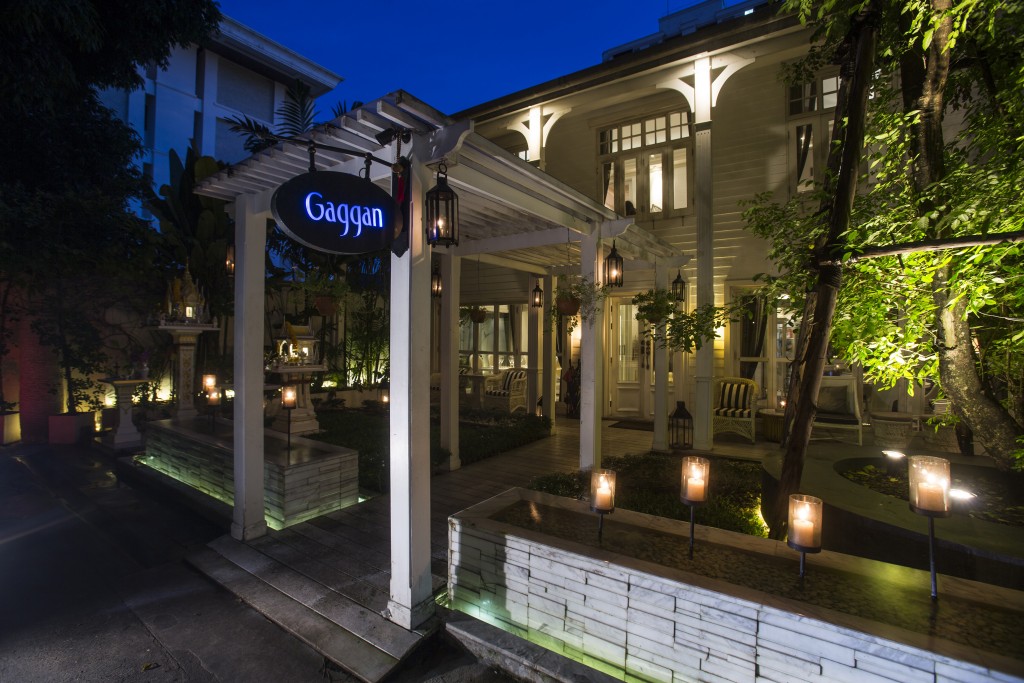 At the eponymous Gaggan restaurant in Bangkok, Anand Gaggan applies his training at Ferran Adria’s lab by translating traditional flavors from his homeland into works of art that challenge preconceptions of how Indian food should taste and look. A self-proclaimed rebel, Gaggan spoke to Reuters about his deconstructive approach to Indian cooking, ranging from spherical raita that bursts in the mouth to “Viagra” oysters with truffle foam served in a treasure chest. Photo by Athit Perawongmetha/Reuters 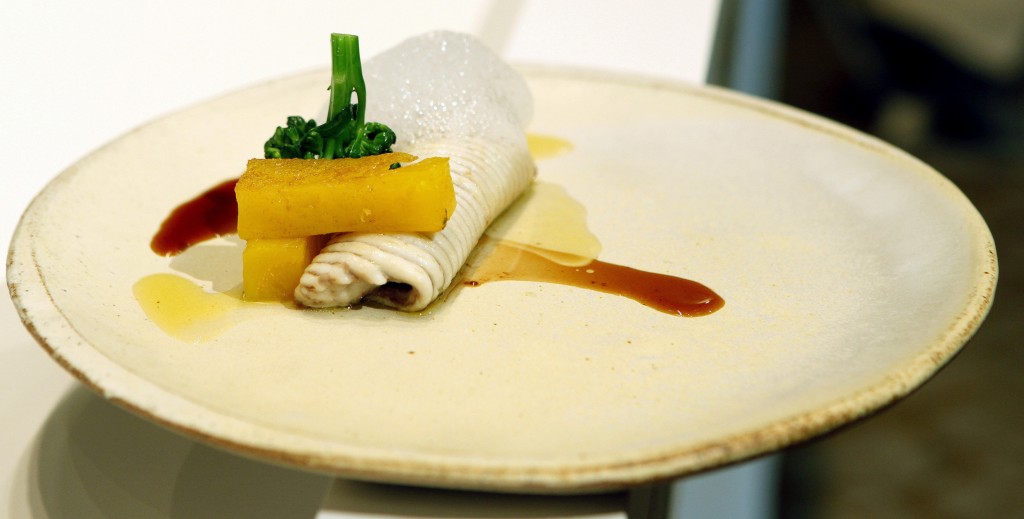 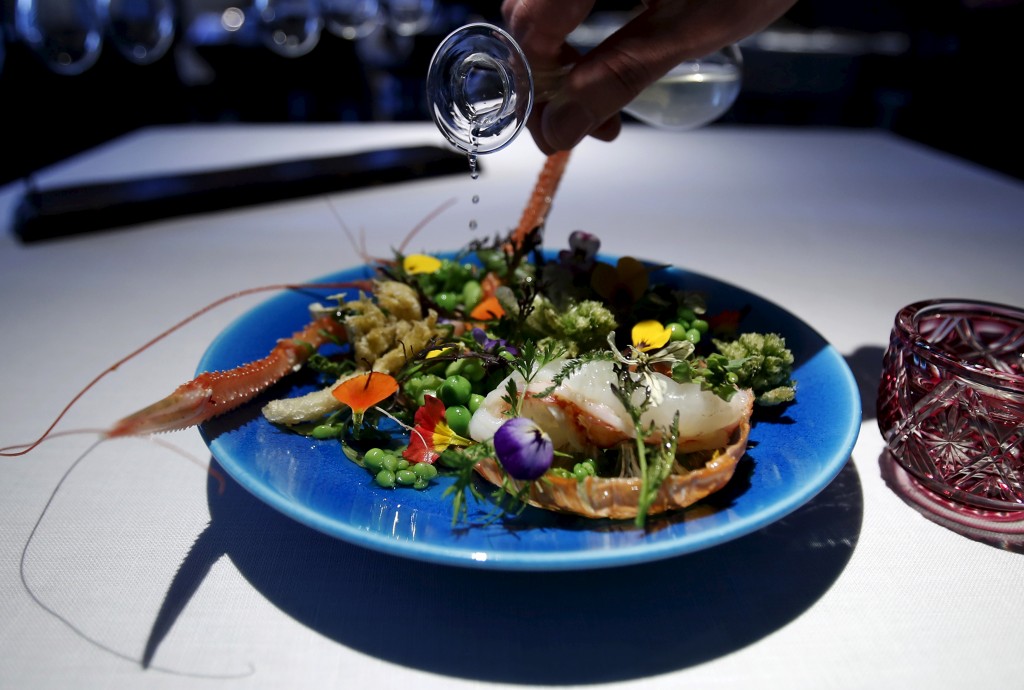 A staff of Tokyo’s French restaurant Narisawa, pours transparent tomato essence made from juice from pureed tomato from a flask to a dish called “Five flavors,” for an early spring menu which includes Akaza Ebi, or langoustine shrimp, from Suruga Bay in central Japan, accented with “green caviar” of various green peas, along with the petals of rucola flowers and viola. Photo by Yuya Shino/Reuters 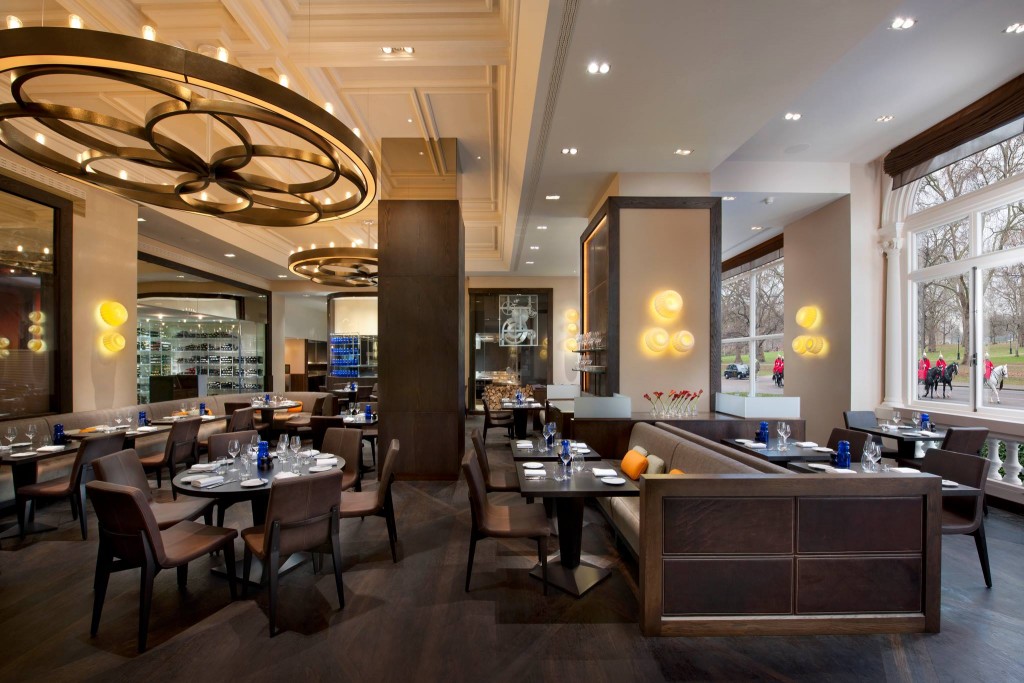 According to its website, the two-Michelin starred restaurant is “inspired by historic British gastronomy.” Photo from Dinner by Heston Blumenthal’s Facebook page 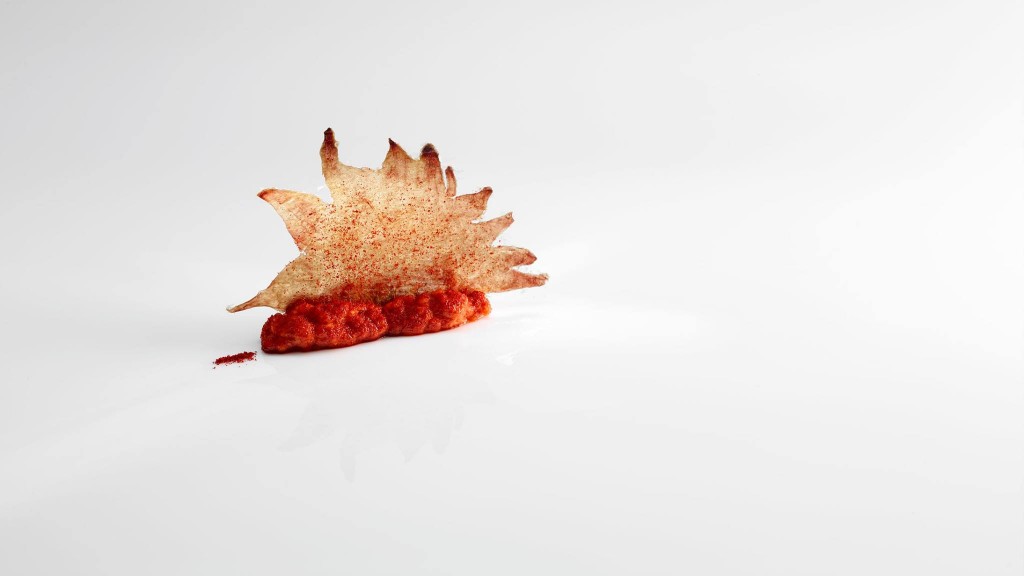 According to its website, Mugaritz “delivers a gastronomic experience of 24 dishes.” Above, comb and coral biscuit. Photo by José Luis López de Zubiría/Mugaritz 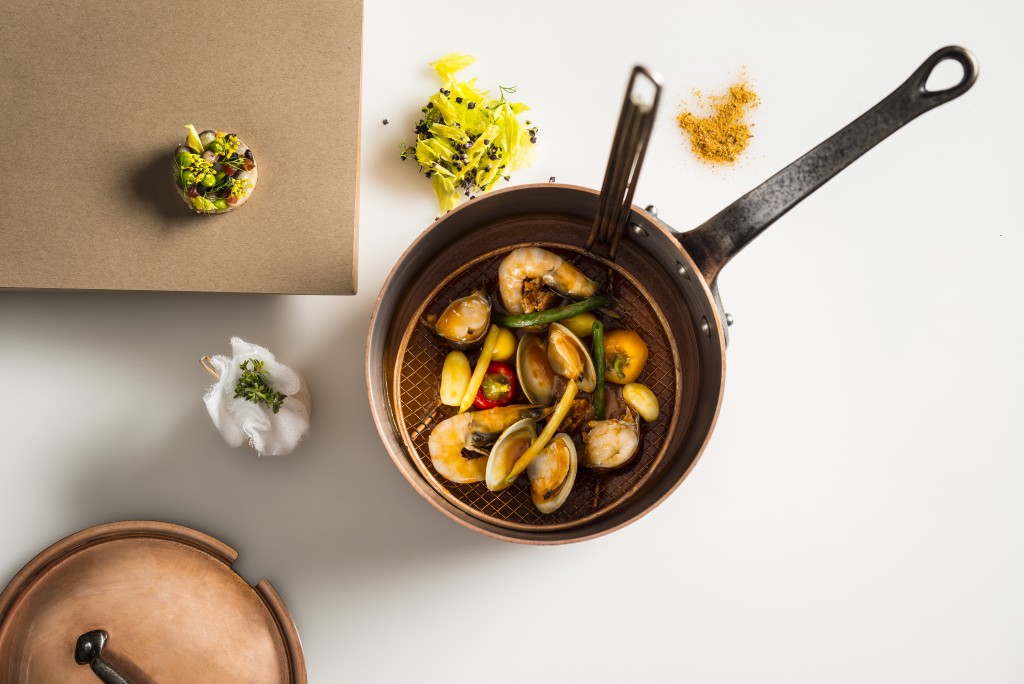 A copper pot and copper spider filled with prawns, lobster tails, stuffed peppers, summer beans, clams, baby potatoes and italian sausage pieces next to a ground spice mix, a mix of celery leaves with fennel plouches, a board with a coco bean ecraser topped with diced bacon, cranberry beans, market beans, celery leaves, dill plouches, fennel plouches and a half lemon in cheesecloth with an herb sprig next to a copper pot top prepared by Executive Chef/Owner Daniel Humm of Eleven Madison Park. Photo by Francesco Tonelli

At Central, you can try a tasting menu of eight courses, which cost 290 Peruvian Soles or $92, or one featuring 17 plates for 388 Soles or $123.35. The above dish is called maíces Peruanos. Photo via the restaurant’s Facebook page 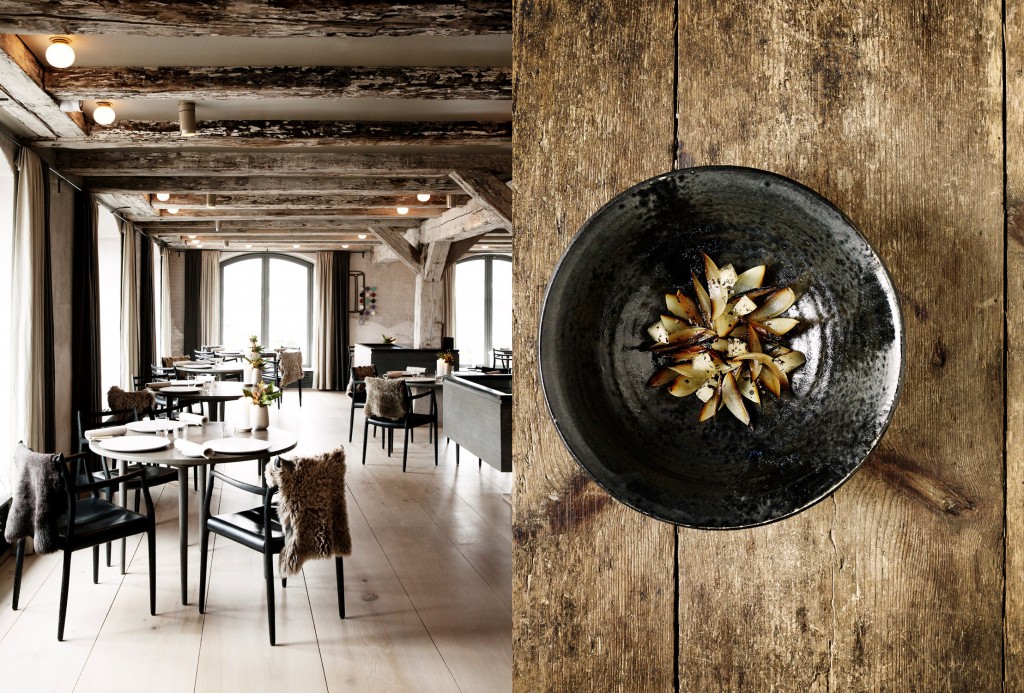 Noma chefs look to Denmark’s landscape for its inspiration. On the right is onion, pear, kelp oil and salt of wood ants. Photo by Mikkel Heriba 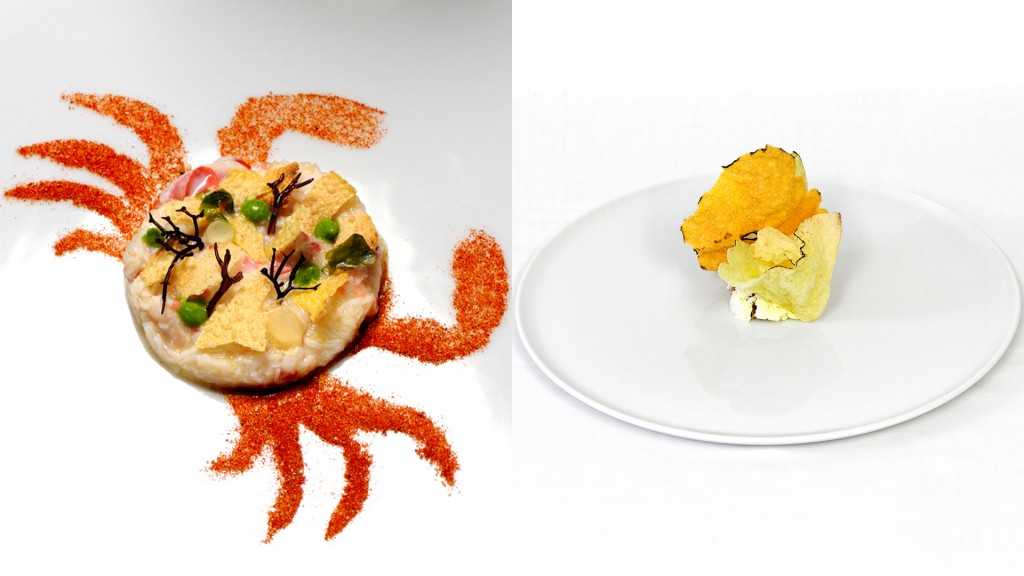 Three-Michelin star chef Massimo Bottura approaches cooking with a sense of art. On the left, moeche and polenta, and on the right, signature dish, crunchy part of a lasagna. Photos by Paolo Terzi 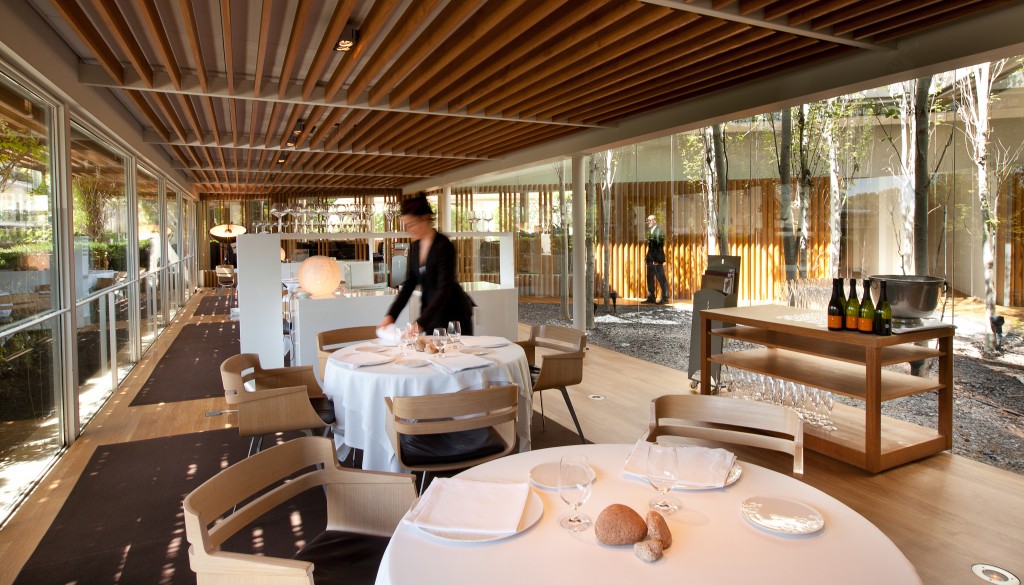 This is El Celler de Can Roca’s first time in the top spot on this list. The restaurant is led by the Roca brothers, Jordi, Josep and Joan. Photo courtesy of the restaurant

All prices converted into U.S. dollars at this week’s rates.

Vanessa Dennis and Colleen Shalby contributed to this report.

Left: Daniel Humm is the executive chef and owner of Eleven Madison Park in New York. On Sunday, it was named the fifth best restaurant in the world by a panel of international experts. Photo by Francesco Tonelli