Crowd gathers in Hong Kong for 1st protest of 2020

Authorities said the assembly was mostly orderly, but that five people were arrested for criminal damage on suspicion of vandalizing the glass door and automated teller machine at a bank along the march route. Banks and businesses identified with mainland China have been frequent targets of hardcore protesters.

Protesters also hurled Molotov cocktails and garbage at officers in the Wan Chai district through which the march route passed.

Police used pepper spray and tear gas to drive off the demonstrators, although a government statement said officers had been “deploying the minimum necessary force” in dispersing the group.

March participants were asked to “disperse soon after it ends and not to take part in any illegal or violent acts that may occur.”

“To safeguard the rule of law and public peace, the police will enforce the law strictly,” the statement said. 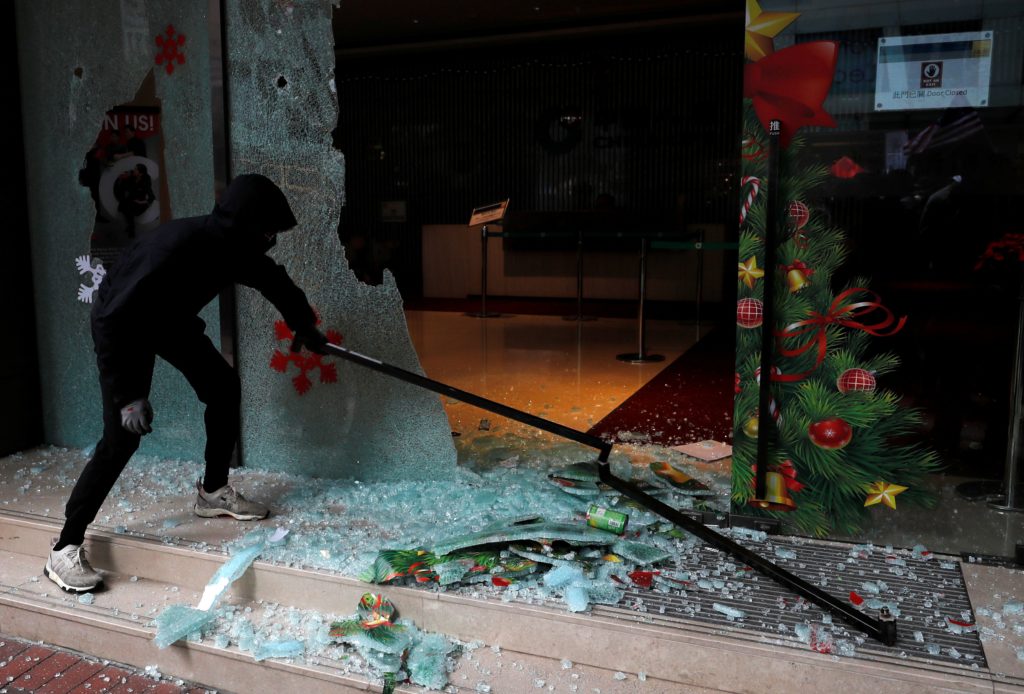 An anti-government protester vandalizes a bureau of the China Life Insurance Company during demonstration on New Year’s Day, to call for better governance and democratic reforms in Hong Kong, China, January 1, 2020. Photo by Tyrone Siu/Reuters

The massive rally followed overnight clashes between police and protesters on New Year’s Eve in a densely populated shopping district. Police also used tear gas, pepper spray and water cannons to break up groups of demonstrators who blocked traffic and lit fires in the street in the working class district of Mong Kok.

Hong Kong toned down its New Year’s celebrations amid the protests that began in June and which have dealt severe blows to the city’s retail, tourism and nightlife sectors.

Eric Lai, the vice convener of the march organizer, the Civil Human Rights Front, said he hoped to avoid a recurrence of the previous night’s violence.

“I really hope that this will be a peaceful protest,” Lai said. “We hope that the police can facilitate us, rather than provoking us, and to fire tear gas and water cannon at us.”

Such marches have often devolved at their conclusion into violence between hardcore, black-clad protesters and police. Both sides have been accused of provoking clashes, and nearly 6,500 protesters as young as 12 have been arrested in scores of incidents on streets, in shopping malls and on college campuses.

Recent protests have drawn participants from across Hong Kong society, sometimes numbering more than 1 million and packing the downtown area from Victoria Park to the government office complex a short distance away. Many joining in are concerned about an erosion of the former British colony’s civil liberties it was promised after being handed over to Chinese rule in 1997, along with a shortage of well-paying jobs and a yawning divide between the city’s ruling class and those merely getting by amid soaring housing costs.

This year’s event appeared to be significantly larger than in past years, although estimates of the numbers of participants often vary widely between organizers and police. 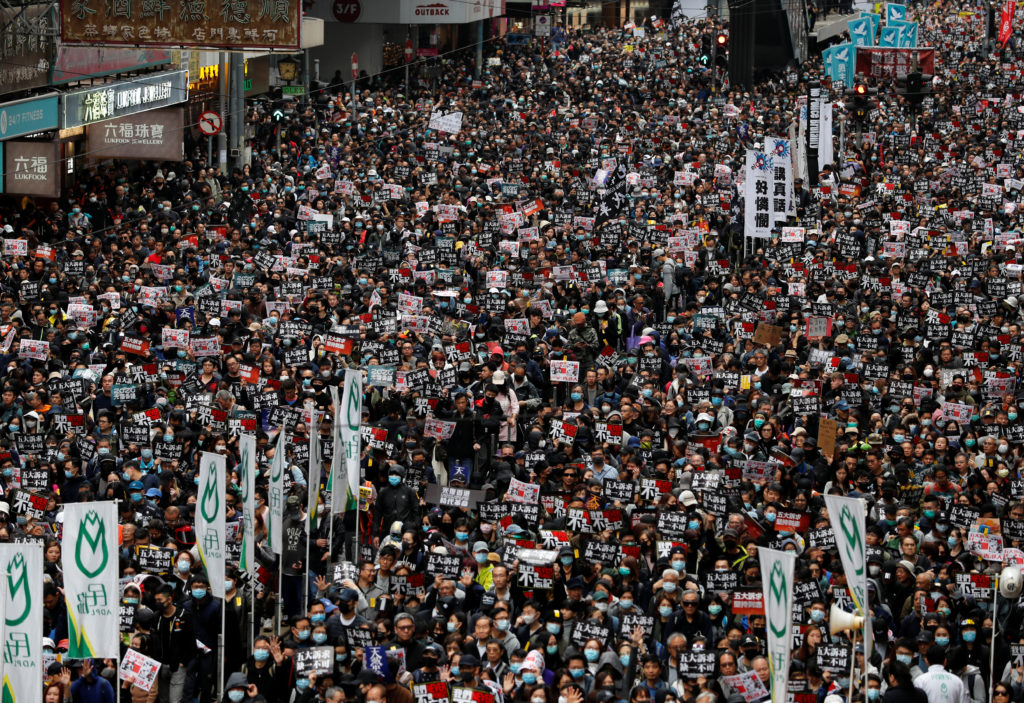 An anti-government protester vandalizes a bureau of the China Life Insurance Company during demonstration on New Year’s Day, to call for better governance and democratic reforms in Hong Kong, China, January 1, 2020. Photo by Tyrone Siu/Reuters

The protests began in June over proposed legislation that could have allowed residents to be extradited to China where they could face possible torture and unfair trials. The legislation was withdrawn, but not before the protests expanded to wider calls for reforms in the semi-autonomous Chinese territory.

Protesters Tuesday also gathered at the Prince Edward subway station where police four months ago had rushed in, beating and tear gassing demonstrators who had no way to flee. That incident is among many cited by demonstrators as cases of police abuse for which no one has been held accountable.

In her New Year’s address, Hong Kong leader Carrie Lam said the months of protests had brought “sadness, anxiety, disappointment and even rage,” and she vowed to tackle underlying social and economic problems in the coming year.

Lam said she would “listen humbly” to help bring an end to the protests but also reinforced the importance of the “one country, two systems” framework under which China rules Hong Kong and which brooks no challenge to the ruling Communist Party’s ultimate authority.

In his own New Year’s address, Chinese President Xi Jinping referred to the protests, saying “Hong Kong’s prosperity and stability is the wish of Hong Kong compatriots and the expectation for the people of the motherland.”

Left: An anti-government protester wears a Guy Fawkes mask during a demonstration on New Year's Day to call for better governance and democratic reforms in Hong Kong, China, January 1, 2020. Photo by Navesh Chitrakar/Reuters

How will Beijing respond to Hong Kong election results and leaked Uighur documents?