NAIROBI, Kenya  — The crunch of young locusts comes with nearly every step. The worst outbreak of the voracious insects in Kenya in 70 years is far from over, and their newest generation is now finding its wings for proper flight.

The livelihoods of millions of already vulnerable people in East Africa are at stake, and people like Boris Polo are working to limit the damage. The logistician with a helicopter firm is on contract with the United Nations Food and Agricultural Organization, helping to find and mark locust swarms for the targeted pesticide spraying that has been called the only effective control.

“It sounds grim because there’s no way you’re gonna kill all of them because the areas are so vast,” he told The Associated Press from the field in northwestern Kenya on Thursday. “But the key of the project is to minimize” the damage, and the work is definitely having an effect, he said.

For months, a large part of East Africa has been caught in a cycle with no end in sight as millions of locusts became billions, nibbling away the leaves of both crops and the brush that sustains the livestock so important to many families.

“The risk of significant impact to both crops and rangelands is very high,” the regional IGAD Climate Prediction & Applications Center said Wednesday in a statement.

For now, the young yellow locusts cover the ground and tree trunks like a twitching carpet, sometimes drifting over the dust like giant grains of sand.

In the past week and a half, Polo said, the locusts have transformed from hoppers to more mature flying swarms that in the next couple of weeks will take to long-distance flight, creating the vast swarms that can largely blot out the horizon. A single swarm can be the size of a large city. 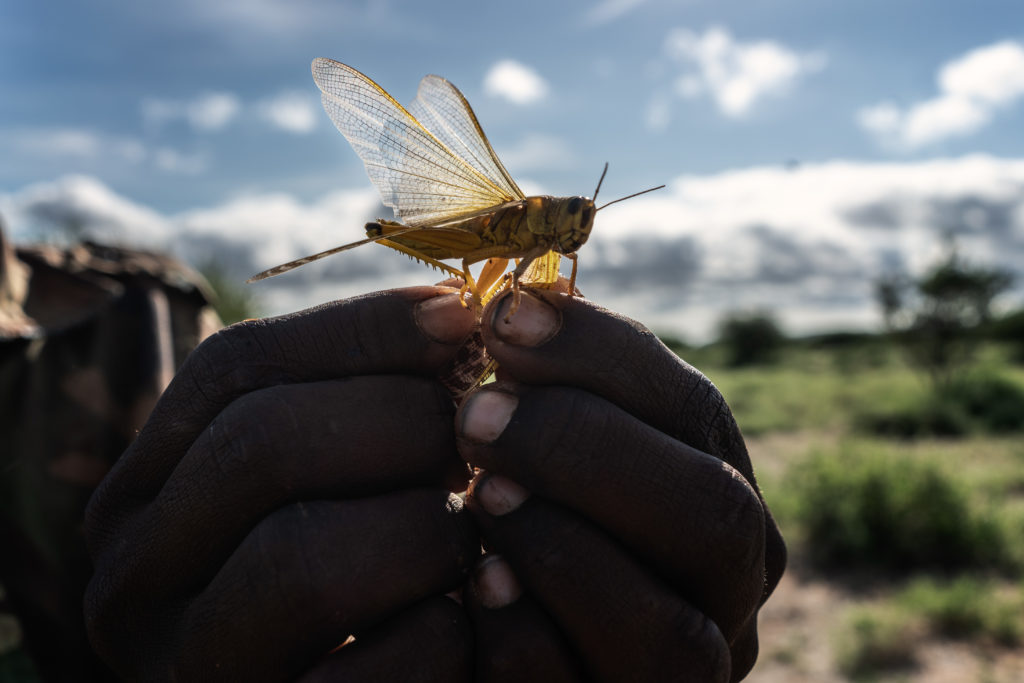 A man holds a desert locust in his hand on May 21, 2020 in Samburu County, Kenya. Trillions of locusts are swarming across parts of Kenya, Somalia and Ethiopia, following an earlier infestation in February. Pastoralist communities like the Samburu in northern Kenya fear the locusts will devastate the rangeland on which their livestock are dependent. Photo by Fredrik Lerneryd/Getty Images.

Once airborne, the locusts will be harder to contain, flying up to 200 kilometers (124 miles) a day.

“They follow prevailing winds,” Polo said. “So they’ll start entering Sudan, Ethiopia and eventually come around toward Somalia.” By then, the winds will have shifted and whatever swarms are left will come back into Kenya.

“By February, March of next year they’ll be laying eggs in Kenya again,” he said. The next generation could be up to 20 times the size of the previous one.

The trouble is, only Kenya and Ethiopia are doing the pesticide control work. “In places like Sudan, South Sudan, especially Somalia, there’s no way, people can’t go there because of the issues those countries are having,” Polo said.

“The limited financial capacity of some of the affected countries and the lockdown due to the coronavirus pandemic have further hampered control efforts. Additionally, armed conflict in Somalia rendered some of the locust breeding areas inaccessible,” ICPAC expert Abubakr Salih Babiker and colleagues wrote in correspondence published in the journal Nature Climate Change this month.

Since “more extreme climate variability could increase the likelihood of pest outbreaks and spread,” they called for a better early warning system for the region and urged developing countries to help.

The World Bank earlier this year announced a $500 million program for countries affected by the historic desert locust swarms, while the FAO has sought more than $300 million. 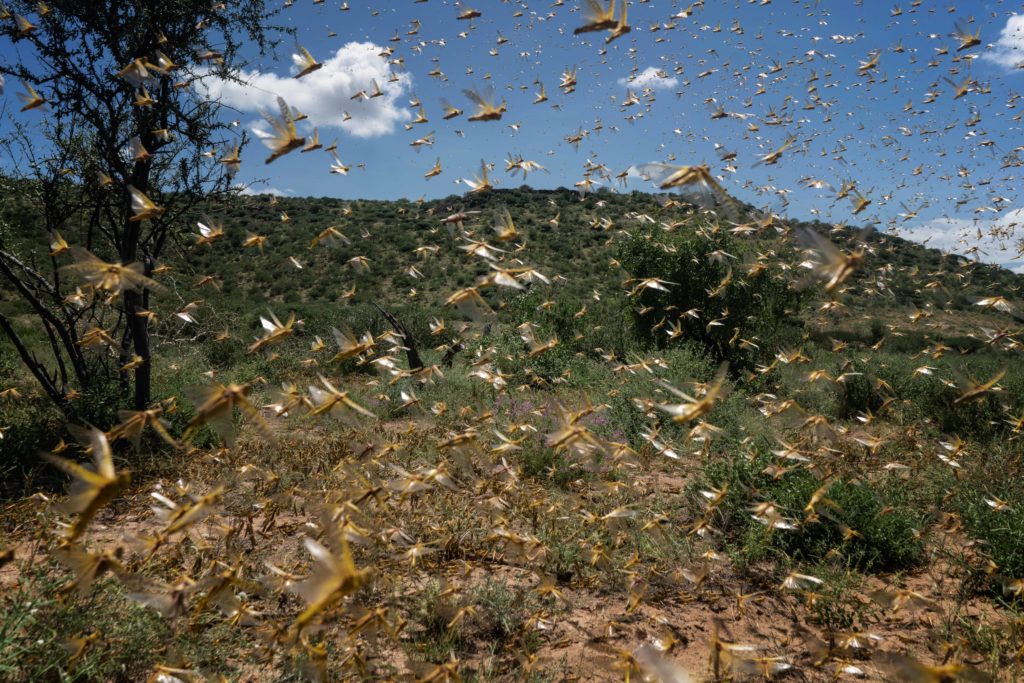 SAMBURU COUNTY, KENYA – MAY 21: Locusts start to fly in the morning hours after roosting in the trees overnight on May 21, 2020 in Samburu County, Kenya. Trillions of locusts are swarming across parts of Kenya, Somalia and Ethiopia, following an earlier infestation in February. Pastoralist communities like the Samburu in northern Kenya fear the locusts will devastate the rangeland on which their livestock are dependent. (Photo by Fredrik Lerneryd/Getty Images)

The pesticide spraying in Kenya “has definitely borne fruit,” said Kenneth Mwangi, a satellite information analyst with ICPAC. There’s been a sharp decline from the first wave of locusts, and a few counties that had seen “huge and multiple swarms” now report little to none. Areas experiencing the second wave are notably the farthest from control centers, he said.

It’s been more challenging in Ethiopia, where despite the spraying, new locust swarms arrived from Somalia and parts of northern Kenya. “Unfortunately both waves have found crops in the field,” Mwangi said.

But without the control work, Polo said, the already dramatic swarms would be even more massive.

He and colleagues target the locusts in the early mornings before they leave their roosting spots and start flying in the heat of the day. The work has gone on since March.

“These plagues are part of nature,” Polo said. “They actually rejuvenate the areas. They don’t kill the plants, they eat the leaves. Everything grows back.

Left: : A man is chasing away a swarm of desert locusts early in the morning, on May 21, 2020 in Samburu County, Kenya. Trillions of locusts are swarming across parts of Kenya, Somalia and Ethiopia, following an earlier infestation in February. Pastoralist communities like the Samburu in northern Kenya fear the locusts will devastate the rangeland on which their livestock are dependent. Photo by Fredrik Lerneryd/Getty Images.