Czechs use anniversary of Velvet Revolution to pressure PM

PRAGUE — About a quarter of a million Czechs gathered on the 30th anniversary of the Velvet Revolution that brought an end to decades of communist rule in the country to give Prime Minister Andrej Babis an ultimatum — sell your business or quit your job.

Protesters from across the Czech Republic attended Saturday’s demonstration, the second massive protest opposing Babis at Letna park, the scene of massive gatherings in 1989 that greatly contributed to the fall of communism.

The demonstrators see the populist billionaire and his ally, pro-Russian President Milos Zeman as a threat to democracy. They have given Babis a deadline of Dec. 31 to get rid of his business and media empire or resign.

“We won’t give up until you’re gone,” said Mikulas Minar, a student who put his studies on hold to lead a group called Million Moments for Democracy that organizes the demonstrations against Babis. 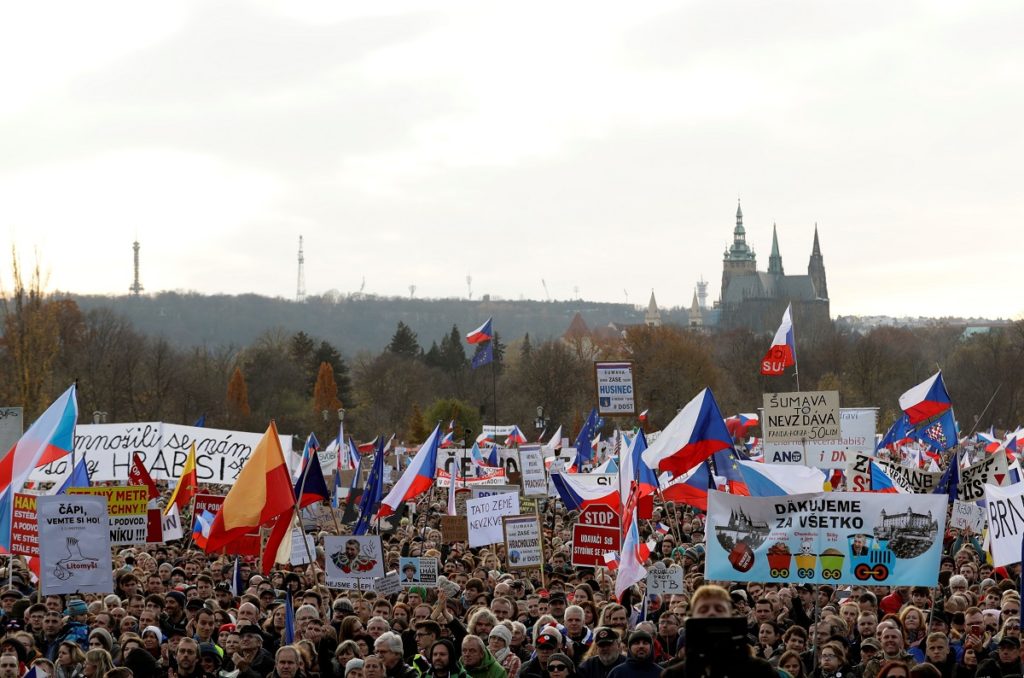 Demonstrators wave Czech flags during an anti-government rally, organised by Million Moments for Democracy, a day ahead of the 30th anniversary of the 1989 Velvet Revolution that led to the fall of Communism in former Czechoslovakia, in Prague, Czech Republic November 16, 2019. Photo by David W Cerny/ Reuters.

Babis was required to transfer ownership of his businesses that includes a conglomerate of some 250 companies and two major newspapers to two trust funds in February 2017.

But his critics, including Transparency International, say he still maintains control and a preliminary European Union report leaked to media concluded the same, saying Babis is in a position to influence the EU subsidies companies receive.

Babis denies wrongdoing and says there’s no reason for him to resign.

“It’s great that people can express their view and nobody persecutes and attacks them,” Babis said.

Over 250,000 were at the previous rally at the same place in June which was considered the biggest anti-government protest since the end of communism.

“Resign, resign,” the crowd chanted, facing a banner on the big stage that read “We want healthy democracy.”

Babis also faces allegations that he collaborated with Czechoslovakia’s secret police before 1989, and has been criticized for his government’s power-sharing deal he signed July 10 last year that gave the Communist Party a role in governing for the first time since the Velvet Revolution.

The Communists are not part of the minority coalition government of Babis’ centrist ANO movement and the left-leaning Social Democrats but enabled the government’s creation by supporting it in a confidence vote.

Babis’ movement won the parliamentary election on October 2017 but his first minority government lost a confidence vote in January 2018 and had to resign. Zeman asked him to form a government again.

“I’m here because I consider Babis and Zeman an evil,” said Zbynek Fiedler, who traveled 350 kilometers (220 miles) from the eastern city of Ostrava to Prague with friends.

“They destroy our society,” the 68-year-old pensioner said.

The organizers are set to announce a new wave of protests on Jan. 7 if Babis doesn’t meet their demands.

Left: Demonstrators hold signs at an anti-government protest, organised by Million Moments for Democracy, a day ahead of the 30th anniversary of the 1989 Velvet Revolution that led to the fall of Communism in former Czechoslovakia, in Prague, Czech Republic November 16, 2019. Photo by David W Cerny/ Reuters.