KABUL, Afghanistan (AP) — The death toll from an attack against the Kabul office of the Afghan president’s running mate and former chief of the intelligence service climbed to at least 20 people on Monday, an official said.

Around 50 other people were wounded in Sunday’s attack against the Green Trend party headquarters, which lasted hours and included a gunbattle between security forces and the attackers, who were holed up inside the building, according to Interior Ministry spokesman Nasrat Rahimi.

Several gunmen were killed by the security forces, Rahimi said.

The attackers’ potential target, vice presidential candidate and former intelligence chief Amrullah Saleh, was “evacuated from the building and moved to a safe location,” Rahimi said. Some 85 other civilians were also rescued from inside.

No one immediately claimed responsibility for the attack, but both the Taliban and the Islamic State group are active in the capital and have carried out large-scale attacks in Kabul in the past.

The Taliban, who effectively control half the country at this point, have also been staging near-daily attacks across Afghanistan even as they hold talks with the U.S. about a peaceful resolution to the 18-year war, America’s longest conflict. The insurgents however, refuse to directly negotiate with the government, considering it a U.S. puppet.

WATCH: The impact of the Islamic State in Afghanistan

Sunday marked the first day of the Afghan presidential campaign, with a vote scheduled for the end of September.

After the attack, President Ashraf Ghani tweeted that Saleh was unharmed during the “complex attack” targeting the Green Trend office.

Saleh founded the Green Trend after he was sacked as intelligence chief in 2010 by former President Hamid Karzai. Though a relative newcomer on the Afghan political scene, its focus has been democracy and reform while fiercely opposing the Taliban and their extremist ideology.

Ferdous Faramarz, the spokesman for Kabul’s police chief, said the attack started with a suicide car bombing, after which other attackers entered the building and started shooting at security forces.

The explosion from the initial bombing was large enough to be heard throughout the capital. 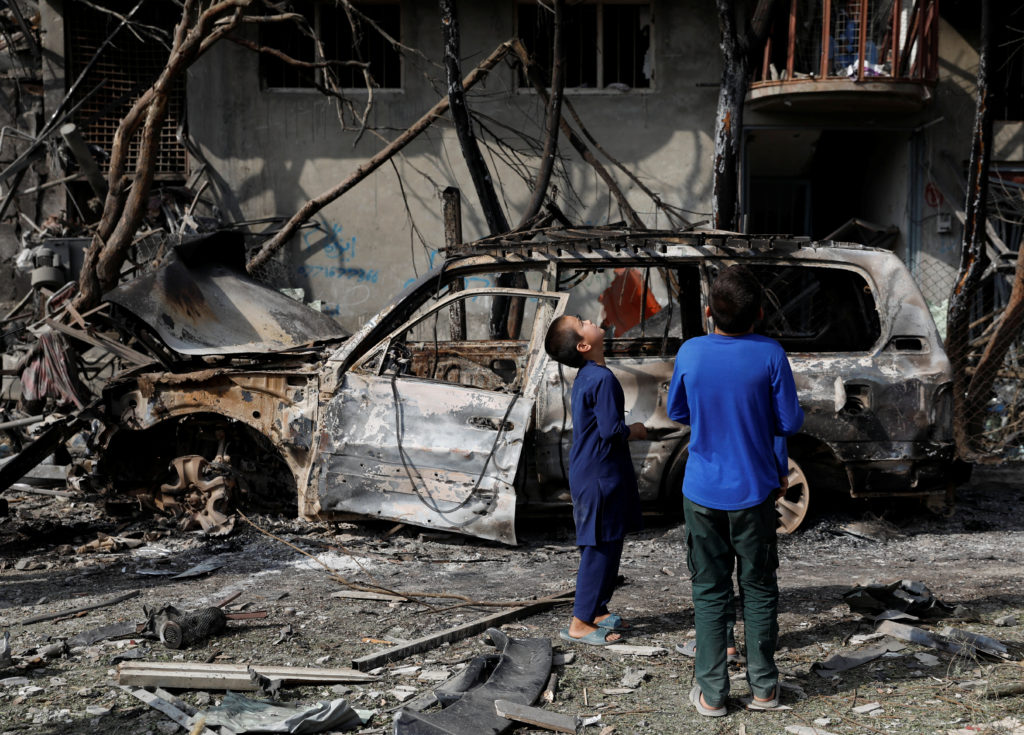 Ghani is seeking a second term in the Sept. 28 vote on promises of ending the war but has been largely sidelined over the past year amid U.S.-Taliban talks.

U.S. envoy Zalmay Khalilzad, who is currently visiting Kabul, has held several rounds of talks with the Taliban in recent months. The two sides appear to be closing in on an agreement in which the U.S. would withdraw its forces in return for a pledge from the Taliban to keep the country from being used as a launch pad for global attacks.

The Taliban and IS are sharply divided over ideology and tactics, with the Taliban largely confining their attacks to government targets and Afghan and international security forces while IS militants mainly target the country’s minority Shiites.

The Taliban and IS have fought each other on a number of occasions, and the Taliban are still the larger and more imposing force.