BRUSSELS — The European Commission chief warned the U.K. parliament it should not count on any renegotiation ahead of Britain’s departure in March, as European Union leaders on Sunday approved a landmark agreement on Britain’s exit.

After the rubber stamping, all eyes turn to British Prime Minister Theresa May to sell the deal to her recalcitrant parliamentarians over the next days and weeks — a huge task considering the intense opposition both her Conservative lawmakers and the political opposition have voiced toward the deal. 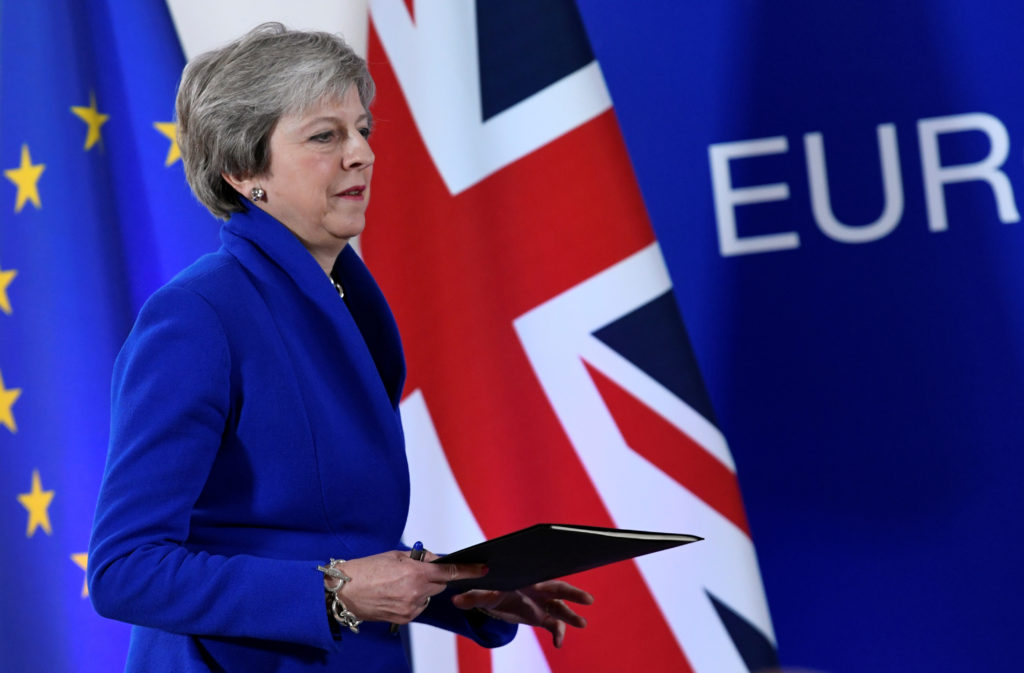 Britain’s Prime Minister Theresa May arrives at a news conference after an extraordinary EU leaders summit to finalise and formalise the Brexit agreement in Brussels, Belgium November 25, 2018. Photo by Piroschka van de Wouw/Reuters

It took leaders a matter of minutes at Sunday’s summit in Brussels to endorse a withdrawal agreement that settles Britain’s divorce bill, protects the rights of U.K. and EU citizens hit by Brexit and keeps the Irish border open. They also backed a 26-page document laying out their aims for future relations after Britain leaves in March.

At a bittersweet summit to mark the first time an EU nation is leaving the bloc, EU Commission President Jean-Claude Juncker said “I don’t think that Britain will be a third country like other third countries.”

“There is, between us — something — which are the remainings of love,” he said.

At the same time, he urged the British parliament to back the deal because nothing better will come to the table.

“I am totally convinced this is the only deal possible. Those who think that by rejecting the deal that they would have a better deal will be disappointed the first seconds after the rejection,” Juncker warned.

The agreement paves the way for Britain’s smooth departure from the bloc from the EU side, though a bumpy ride still awaits in the U.K.

In a formal statement endorsing the deal, the leaders called on EU institutions “to take the necessary steps to ensure that the agreement can enter into force on 30 March 2019, so as to provide for an orderly withdrawal.”

The U.K. is due to leave the EU at midnight Brussels time on March 29.

EU chief negotiator Michel Barnier said now that the first phase was done, Britain and the EU needed to work for “an ambitious and unprecedented partnership.”

READ NEXT: The coalition moving Brexit forward is falling apart. What happens next?

“Now is the time for everybody to take their responsibility — everybody,” he said.

Dutch Prime Minister Mark Rutte said the deal — the product of a year and a half of often grueling negotiations between Britain and the EU — was regrettable, but acceptable.

“I believe that nobody is winning. We are all losing because of the U.K. leaving,” Rutte said. “But given that context, this is a balanced outcome with no political winners.”

The last big obstacle to a deal was overcome on Saturday, when Spain lifted its objections over the disputed British territory of Gibraltar.

The deal must still be ratified by the European Parliament, something parliament President Antonio Tajani said would likely take place early in 2019.

More dauntingly for May, it also needs approval from Britain’s Parliament.

May is under intense pressure from pro-Brexit and pro-EU British lawmakers, with large numbers on both sides of the debate opposing the divorce deal and threatening to vote it down when it comes to the House of Commons next month. Brexiteers think it will leave the U.K. tied too closely to EU rules, while pro-Europeans say it will erect new barriers between Britain and the bloc — its neighbor and biggest trading partner.

Pro-Brexit Conservative lawmaker Iain Duncan Smith said Sunday that May should demand new conditions from the EU. He said the deal as it stands “has ceded too much control” to Brussels.

May insists her deal delivers on the things that matter most to pro-Brexit voters — control of budgets, immigration policy and laws — while retaining close ties to the U.K.’s European neighbors.

May plans to spend the next couple of weeks selling it to politicians and the British public before Parliament’s vote in December.

In a “letter to the nation” released Sunday, May said she would be “campaigning with my heart and soul to win that vote and to deliver this Brexit deal, for the good of our United Kingdom and all of our people.”

“It will be a deal that is in our national interest – one that works for our whole country and all of our people, whether you voted ‘Leave’ or ‘Remain,’” she said.

She said Britain’s departure from the EU “must mark the point when we put aside the labels of ‘Leave’ and ‘Remain’ for good and we come together again as one people.”

“To do that we need to get on with Brexit now by getting behind this deal.”