It marked the first time in recent memory that the Druze — followers of a secretive offshoot of Shiite Islam who are considered fiercely loyal to the state — staged a large public protest. Hundreds of brightly colored Druze flags, rarely seen outside the community, fluttered in the square along Israel’s national banners. Nearby City Hall was also lit up in Druze colors.

The rally marked the biggest backlash yet against the recently passed law that enshrines Israel’s Jewish character and downgrades the standing of Arabic from an official to a “special” language. 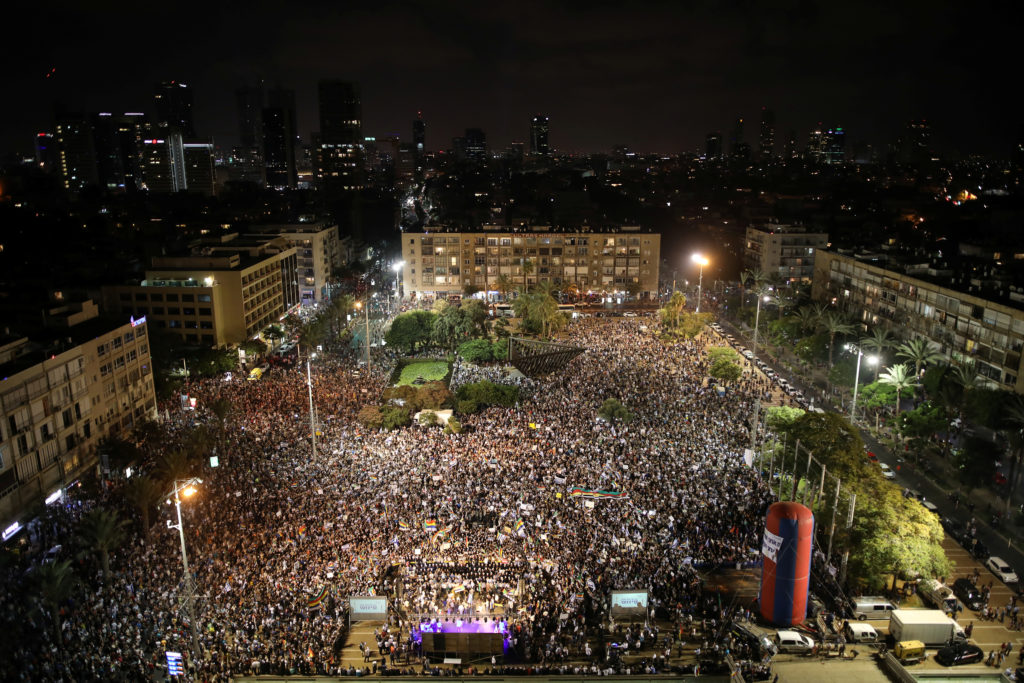 Israelis from the Druze minority, together with others, take part in a rally to protest against Jewish nation-state law in Rabin square in Tel Aviv, Israel, on August 4, 2018. Photo by Corinna Kern/Reuters

The law has outraged Israel’s Arabic-speaking minority which includes the Druze and makes up about 20 percent of the population. Critics say the law undermines the country’s democratic values.

The Druze serve in the military, unlike most of the country’s Arab citizens, who overwhelmingly follow Sunni Islam and have close family ties with Palestinians in the Israeli-occupied territories. Over the years, members of the Druze community have risen to prominence in the military and in politics.

On Saturday, Tel Aviv’s Rabin Square was packed with Druze protesters bused in from all over Israel, and their Jewish backers, including former senior members of the defense establishment. The crowd chanted “equality, equality.”

“We came here to tell the entire Israeli nation, with all of the Israeli people, that this country is for all of us,” retired Brig. Gen. Amal Assad who spearheaded the Druze campaign against the legislation, told The Associated Press. “We were born here, we will die here, we love this country, we have defended it, and we will continue to live here together — Jews, Arabs, Druze, Circassians, Bedouins, as equal brothers.

“We are all Israelis,” he said.

Israeli Prime Minister Benjamin Netanyahu and other Cabinet ministers have met with Druze leaders to try and pacify their concerns. But recent meetings did not go well. 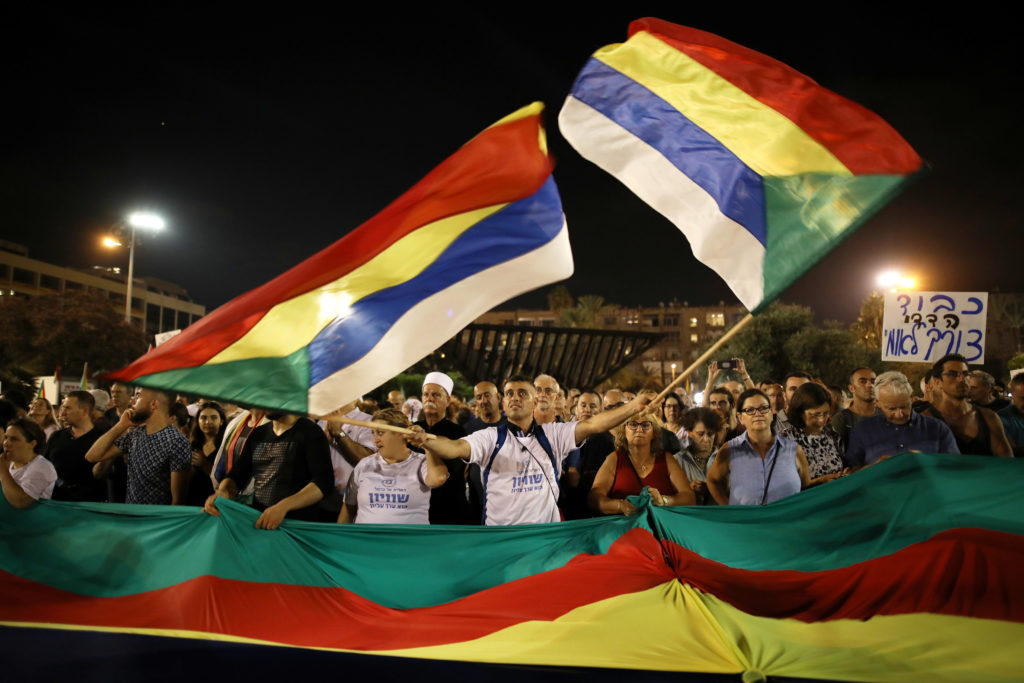 A man waves Druze’s flags as Israelis from the Druze minority, together with others, take part in a rally to protest against Jewish nation-state law in Rabin square in Tel Aviv, Israel, August 4, 2018 Photo by Corinna Kern/Reuters

According to Israeli media, Netanyahu abruptly ended a meeting with Assad and other Druze officials this week after Assad warned the new law would “lead to apartheid.”

Lawmaker Avi Dichter, a co-sponsor of the law, was heckled by Druze in attendance at another meeting.

Several Druze military officers recently said they would stop serving in response to it, sparking fears of widespread insubordination.

Israel’s 1948 declaration of independence defined the country as a Jewish and democratic state. The government says the bill merely enshrines the country’s existing character, but critics say it undercuts Israel’s democratic values and marginalizes the country’s non-Jewish minorities.

The Druze, who also live in other parts of the region including in Syria and Lebanon, have managed to survive by showing loyalty to their country of residence.

Israeli Druze leaders say their alliance with Jews dates back long before they helped them win independence in 1948. The Druze revere Jethro, the father-in-law of Moses, whose tomb in northern Israel is one of their most sacred sites. Israel’s 130,000 Druze live mostly in the north of the country.

Protester Rima Basis, 25, from the predominantly Druze town of Daliyat al-Carmel, said the new law has helped entrench a feeling of inequality that had already existed to some degree.

“The bond that we’ve had until now has suffered a very serious blow,” she said. “Until now, we’ve given without any price, without anything in return, out of the belief that at the end of the day, we’re indeed brothers, people who can live together in peace.”

“If you now define me not as citizens of the state, how can I give any more or feel like I belong to this country, or stand up and sing the national anthem with pride?”

Left: Israelis from the Druze minority, together with others, take part in a rally to protest against Jewish nation-state law in Rabin square in Tel Aviv, Israel, Israel, August 4, 2018 REUTERS/Corinna Kern - RC18926E6650