From Libya to Texas, tragedies illustrate plight of migrants

GENEVA — They are trapped in squalid detention centers on Libya’s front lines. They wash up on the banks of the Rio Grande. They sink without a trace — in the Mediterranean, in the Pacific or in waterways they can’t even name. A handful fall out of airplanes’ landing gear.

A record 71 million people were forcibly displaced around the world in 2018, according to a report last month by the U.N. refugee agency, in places as diverse as Turkey, Uganda, Bangladesh and Peru. Many are still on the move in 2019, or trapped like thousands in detention in Libya, where an airstrike on Tuesday killed at least 44 migrants and refugees locked away in the Tripoli suburb of Tajoura.

Most of those in Tajoura and other Libyan detention centers have been intercepted by the Libyan coast guard, which has become the go-to border force for the European Union, which can’t get 28 governments to agree about migration. Despite the rhetoric about migration crises in Europe and the U.S., the top three countries taking in refugees are Turkey, Pakistan and Uganda. Germany comes in a distant fifth. 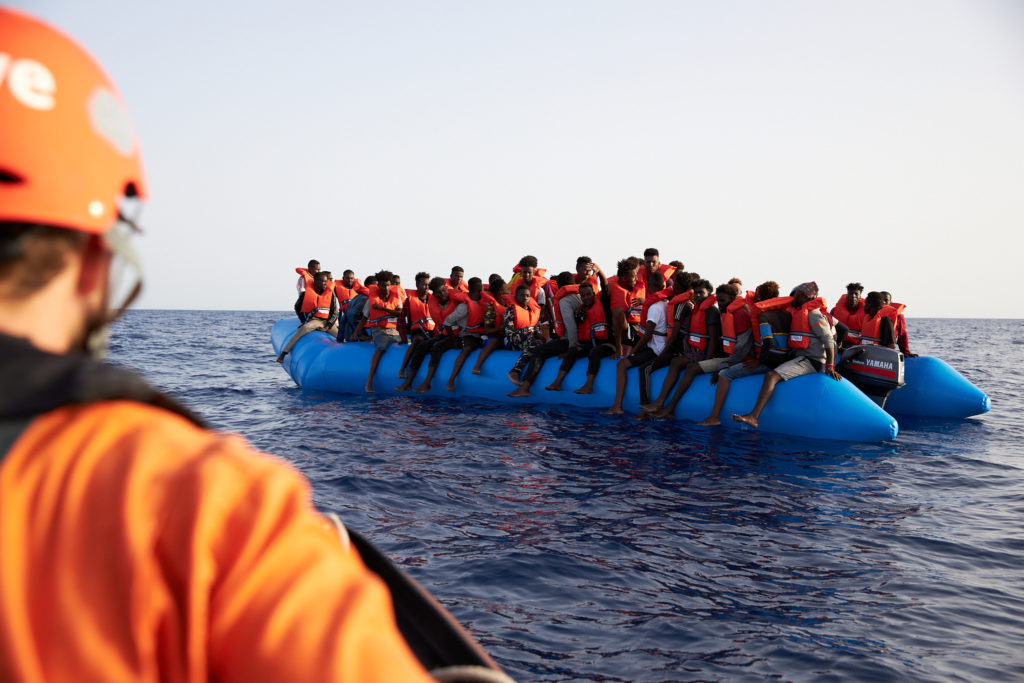 Migrants are evacuated from a blue inflatable boat by the crew of a rescue vessel Alan Kurdi about 34 miles from the Libyan coast according to Sea-eye, in this picture obtained from social media on July 5, 2019. Photo courtesy of Sea-eye via Reuters

A 20-year-old who fled war in his homeland in sub-Saharan Africa two years ago survived the airstrikes, gunfire from militia members trying to keep migrants inside the compound, torture for ransom by traffickers and a sinking boat in the Mediterranean. He is now sleeping outside the Tajoura detention center along with hundreds of other migrants and awaiting a second chance to go to sea.

“I faced death in Libya many times before. I am ready to die again. I already lost my brothers in the war in my country,” he told The Associated Press. He didn’t want his name used because the militia fighters who shot at him are still guarding the compound.

Libya’s interior minister, Fathi Bashagha, pleaded Friday for Europe “to address the problem in a radical way — not to prevent migrants, but to provide jobs and investment in the migrants’ places of origin, as well as in southern Libya … so as to absorb these huge numbers willing and eager to migrate to Europe.”

Within days of the airstrike, at least two boats filled with migrants sank off Libya’s coast, leaving around 140 people missing. Another group was picked up by a rescue ship and then barred from docking on the Italian island of Lampedusa, touching off the 21st standoff between Italy’s populist government and humanitarian groups. A pregnant woman watching a shipboard ultrasound of her baby smiled broadly, seemingly oblivious to the political furor on land and at sea.

A similar disconnect played out recently when the body of a stowaway on an inbound flight from Nairobi crashed to earth next to a man sunbathing on a Sunday afternoon in his London garden. The next day, mourners held a lavish burial in El Salvador for a man and his young daughter who drowned trying to cross the Rio Grande into Texas.

As during a 2015 wave of Syrians, Iraqis and Afghanis pouring into Europe, daily reminders of migrants’ plights are back on front pages.

The U.S.-Mexico border has become a flashpoint amid President Donald Trump’s ambitions to build a wall to keep out migrants. Many children caught crossing are stuck in squalid, unsanitary detention centers. Children have also been separated from parents in custody. Critics call such policies inhumane, heartless and “un-American.”

More broadly, advocates for the huddled masses on the move say not enough is being done in the migrants’ home, transit or destination countries. Only international cooperation can help resolve the agonies, they say — a tough sell at a time of rising go-it-alone, populist and nationalist sentiment in many places.

Filippo Grandi, head of U.N. refugee agency UNHCR , said his office has a “dialogue” going with the U.S. Department of Homeland Security, and “if there is any help that we can provide to the U.S. administration in dealing with this matter, we’re ready to do it.”

But he called for a regional discussion among countries like the United States — the destination for many — as well as transit country Mexico, and the troubled home countries for migrants and refugees such as El Salvador, Honduras and Guatemala, where gang killings and lawlessness are rife.

“I have been to Honduras, to Guatemala, to El Salvador,” he told reporters recently in Geneva. “The violence perpetrated by gangs, the inability of these governments to protect their own citizenship, cause part of these flows. So this needs to be addressed in the proper manner — without stigmatizing these people.”

Lori Hinnant reported from Paris. Maggie Michael in Cairo contributed to this report.

Left: Migrants from Central America form a human chain to cross the Rio Bravo river to enter illegally into the United States to turn themselves in to request for asylum in El Paso, Texas, U.S., as seen from Ciudad Juarez, Mexico June 11, 2019. Picture taken June 11, 2019. Photo By Jose Luis Gonzalez/Reuters