ESCUINTLA, Guatemala — Forensic experts worked Friday on the grim task of identifying dozens of bodies charred beyond recognition by the eruption of Guatemala’s Volcano of Fire, a disaster that has left at least 110 confirmed dead and nearly 200 still missing.

Even as search and recovery efforts were suspended for a second day amid dangerous new volcanic flows and dwindling hopes of finding survivors, about 15 forensic experts worked at a makeshift morgue in a warehouse in the southern city of Escuintla.

The corpses arrive wrapped in sheets and plastic, blackened and often missing extremities, filling the cavernous, metal-roofed warehouse with the unmistakable stench of death. Some still had hair; others did not.

First, the experts check for anything that could help identify the bodies, such as clothing that hasn’t been burned off by flows said to have reached temperatures as high as 1,300 degrees Fahrenheit (700 C).

Later, they will take genetic material from the bones — the only option available — and compare it to blood drawn from people with missing relatives. The bones can also yield information to help determine age and gender.

“We are extracting the samples from bones to do DNA tests,” forensic expert Miguel Morales told The Associated Press, which was allowed access to the morgue to witness the work. “The tissues are in very bad shape.”

Morales said the bodies were essentially mummified, cooked by the extreme heat.

On one table lay the body of someone frozen statue-like in death, the stomach distended and a hand jutting stiffly outward. A woman took notes, and another worker took photographs.

Dozens more bodies were shrouded in white plastic on wooden pallets, and workers used fans and dry ice to cool the space. In all, there were about 40 corpses.

At one end of the cinderblock warehouse, dozens of coffins lay waiting to receive identified bodies that would be handed over to relatives and quickly buried as mandated by health authorities. 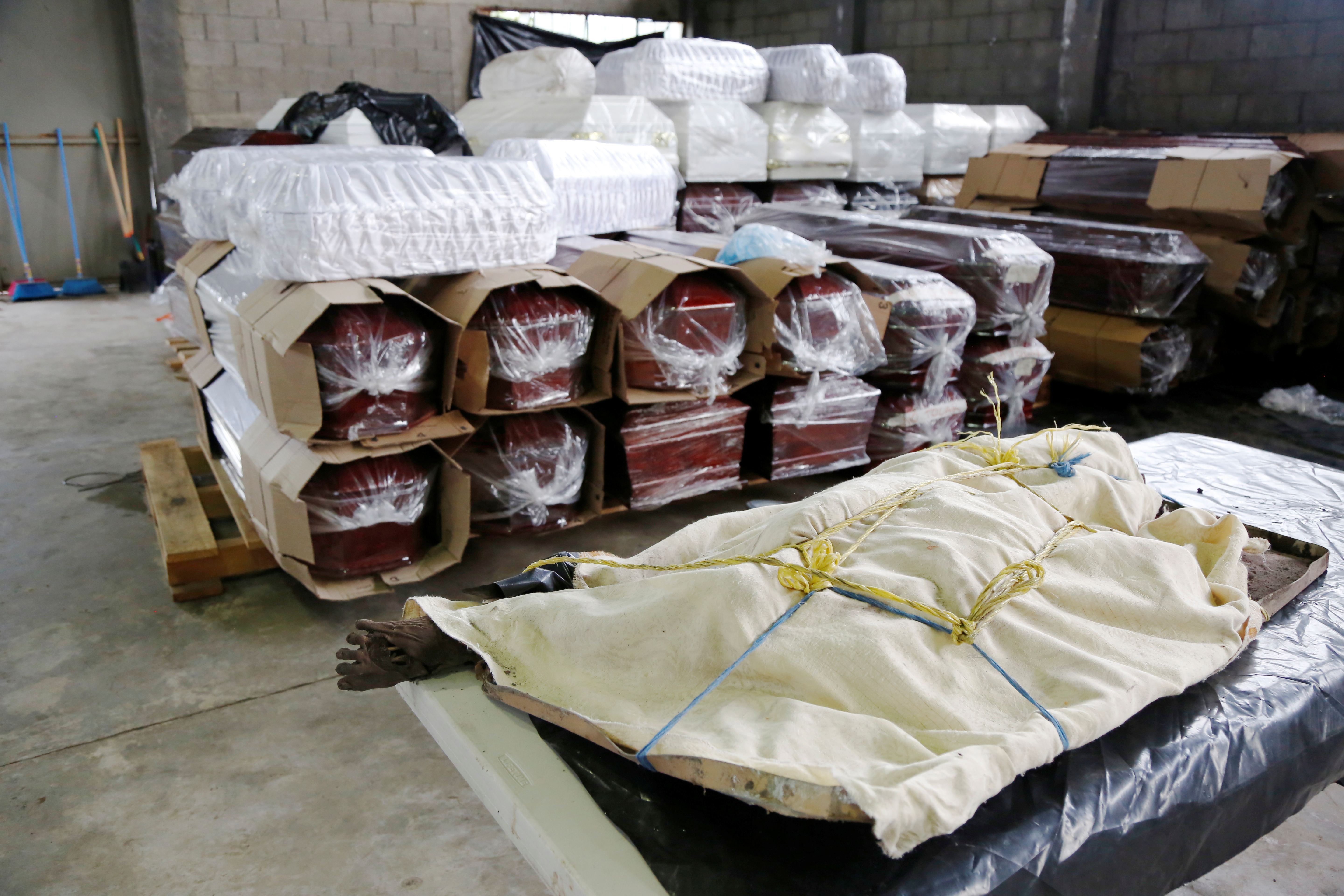 Bodies of victims who died during the eruption of the Fuego volcano are seen at the morgue of Escuintla, Guatemala June 7, 2018. Photo by Reuters.

National Institute of Forensic Sciences director Fanuel Garcia Morales said the process can take several days and workers are trying to get the dead to their families as quickly as possible.

“The (bodies) are essentially petrified. It’s really a question of that in touching and extracting them (during the recovery), they can fall apart easily,” Garcia said.

Dr. Carlos Rodas, head of operations at the temporary morgue, said workers were employing a variety of techniques including examination of fingerprints, when available, dentistry and individual characteristics such as birthmarks, scars, tattoos and previously broken bones.

Authorities ordered new evacuations Friday, warning of activity at the Volcano of Fire and saying dangerous flows of volcanic material, water and sediment were coursing through four canyons. Late Friday, authorities raised the death toll by one to 110.

Residents of the town of El Rodeo, who had recently returned to their homes, were told to leave once again, and people were warned to avoid canyons and areas close to the volcano.

Disaster agency Conred said more than 3,000 workers were attending to families affected by the eruption, and about 3,700 displaced people were being housed in shelters.

Officials say on-and-off downpours have destabilized the terrain and made it too dangerous to work.

But people with missing loved ones have been upset by the suspension of search and recovery efforts. Some criticized the government’s response and traveled into the disaster zones to search for loved ones themselves, digging with their hands or whatever tools they could get ahold of.

Estuardo Hernandez, 19, was talking by phone to his father, Margarito Hernandez, when millions of tons of ash tore through the village of San Miguel Los Lotes on the volcano’s slope.

“He called me at 3:13 p.m. Sunday,” said Hernandez, who was working in the nearby city of Antigua that day and escaped the deadly flow. “The last thing he told me was to go far from here. … The last thing I could hear was him saying: ‘Get inside! There’s a lot of fire out there.’ I say they stayed in the house.”

Peering into the ash-filled home, Hernandez pointed at the back wall where he believes his parents tried to seek refuge.

In the days since the disaster, he said, no government official had come by to take down information or lend a hand, even as crews used earth-moving equipment not far away to clear a stretch of blocked highway.

“Without help we can’t do anything … the only thing that matters to the government is the highway,” Hernandez said. “Why not bring machinery in here?”

Left: Police officer walks near the bodies of victims who died during the eruption of the Fuego volcano at the morgue of Escuintla, Guatemala June 7, 2018. Photo by Reuters.