Torrents of water gushed down streets, sweeping up cars and uprooting trees after rains that began around rush hour Monday evening. Rains slowly weakened by Tuesday evening, but Mayor Marcelo Crivella said the city was still in “crisis” mode, the highest of three levels.

Schools were closed and people urged to avoid non-essential traffic until further notice.

City officials said 6 inches of rain fell in just four hours Monday night, more than the average for the whole month of April.

City officials said 6 inches of rain fell in just four hours Monday night, more than the average for the whole month of April.

The botanical garden neighborhood, a tourist destination, was one of the most badly hit areas, receiving 9 inches in a 24-hour period. Local television stations showed firefighters in that neighborhood wading through knee-deep water pulling a small boatload of children evacuated from a schoolbus on a flooded street.

Sirens sounded in 20 flood-prone areas of the city, alerting people to make their way to pre-established safe spaces.

But no alarm was given in the Babilonia slum, which sits on a hill behind the iconic Sugarloaf mountain. The fire department said two women there died in a mudslide, and local residents complained about the lack of warning.

The mayor, acknowledging the city’s lack of preparedness for the deluge, said sirens did not sound in Babilonia because the water had not reached the minimum threshold to activate the alarms. He said officials would look into lowering this threshold in the future.

Hillside slums are particularly vulnerable to mudslides and city officials said more than 100 communities in Rio have been identified as having “high geological risks.” Crivella said Rio has plans to improve safety, but complained of a lack of federal funding.

The mayor said a recent study carried out by the city identified about 200,000 road potholes and rainwater networks that needed fixing. 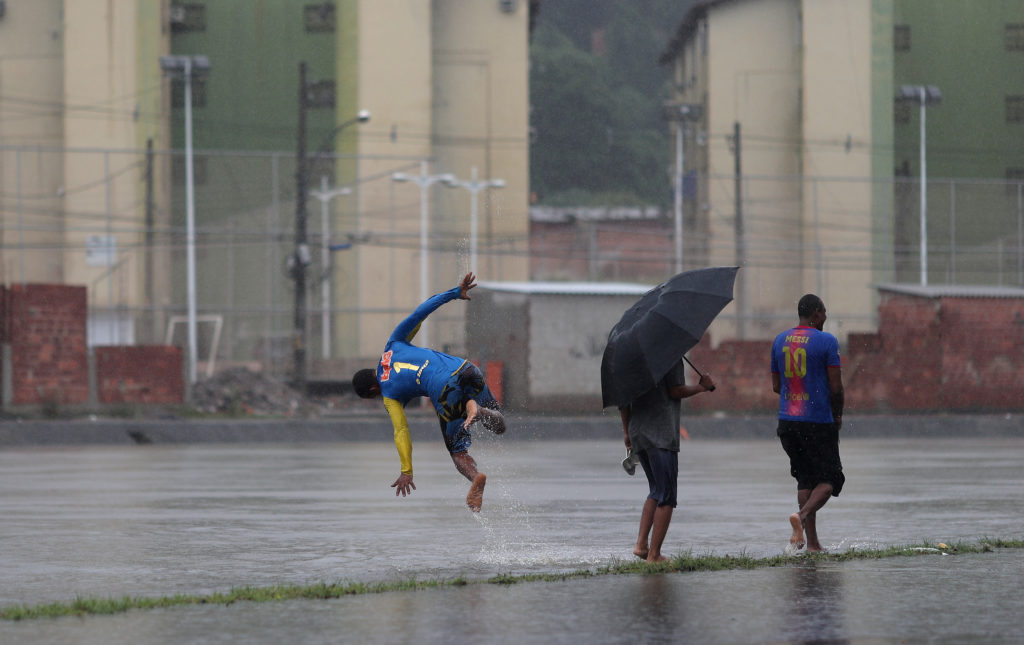 A man dives into a flooded channel during heavy rains in the Fazenda Botafogo neighbourhood in Rio de Janeiro, Brazil, on April 9, 2019. Photo by REUTERS/Ricardo Moraes

A storm with torrential downpours and strong winds just two months ago killed six people, prompting Rio residents to ask what the city is doing to protect them from routine weather events.

Rio’s fire department said that by Tuesday evening it had registered 10 deaths from the latest storm, including two adults and a child who were buried in a car by a mudslide. According to news portal G1, the three victims were a little girl, her grandmother and their taxi driver.

Left: Residents walk holding onto a fence next to a flooded street during heavy rains in the Jardim Botanico neighborhood in Rio de Janeiro, Brazil, on April 9, 2019. Photo by REUTERS/Sergio Moraes