TEHRAN, Iran — The leader of Lebanon’s Hezbollah group vowed Sunday to end the U.S. military’s presence in the Middle East, saying U.S. bases, warships and soldiers were all fair targets following the recent U.S. killing of an Iranian general.

Hassan Nasrallah said the U.S. military “will pay the price” for the U.S. drone strike that killed Gen. Qassem Soleimani in Iraq Friday. His comments further heightened tensions in a region already on high alert and bracing for Iranian retaliation.

President Donald Trump has threatened to bomb 52 sites in Iran if it retaliates by attacking Americans. Iran vowed to take an even-greater step away from its unraveling nuclear deal with world powers as a response to Soleimani’s slaying.

“The suicide attackers who forced the Americans to leave from our region in the past are still here and their numbers have increased,” Nasrallah said.

It was not clear which suicide bombings Nasrallah was referring to. A 1983 attack on a U.S. Marine barracks in Beirut, Lebanon, killed 241 U.S. servicemen. President Ronald Reagan eventually withdrew all American forces from the country. Suicide bombings in Iraq in the 2000s also put pressure on the Americans to withdraw. 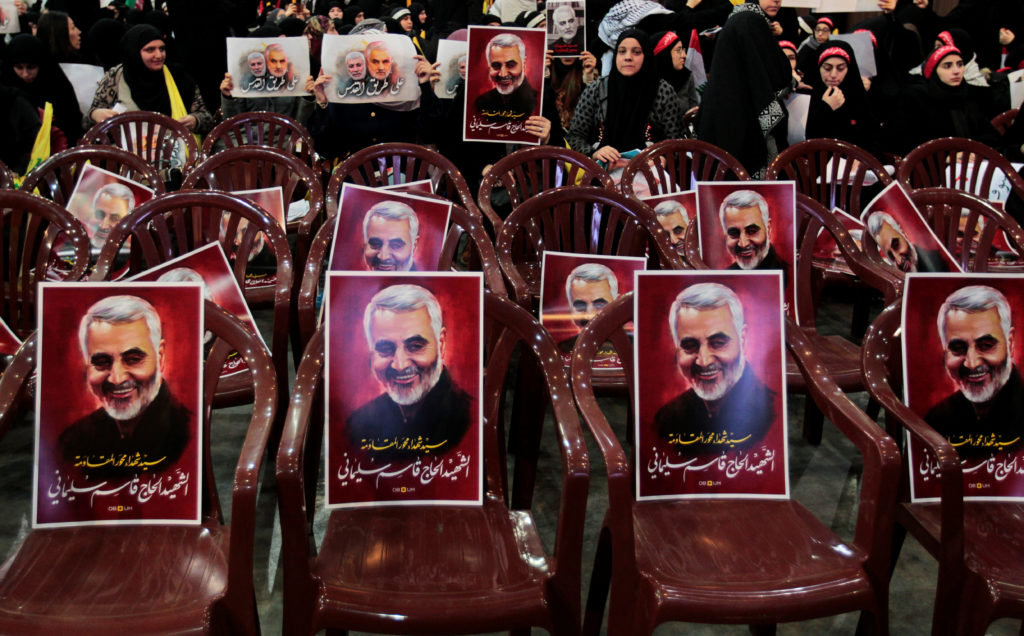 A portrait of late Qassem Soleimani, head of the elite Quds Force, is seen on chairs during a funeral ceremony rally to mourn his death, in the suburbs of Beirut, Lebanon, on January 5, 2020. Photo by Aziz Taher/Reuters

Nasrallah spoke from an undisclosed location, and his speech was played on large screens for thousands of Shiite followers in southern Beirut, interrupted occasionally by chants of “Death to America.” The comments were Nasrallah’s first since Soleimani’s killing.

Nasrallah spoke shortly before the Iraqi parliament voted in favor of a bill to expel the U.S. military from Iraq by canceling the military agreement between the two countries. More than 5,000 U.S. soldiers are in Iraq, based on an invitation by the Iraqi government in 2014 to help fight the Islamic State group.

Earlier Sunday, tens of thousands of mourners accompanied a casket carrying the remains of the slain Soleimani through two major Iranian cities as part of a grand funeral procession across the Islamic Republic for the commander killed by an American drone.

Nasrallah said Soleimani was not only Iran’s concern but the entire so-called “axis of resistance,” a term used to refer to anti-Israel militant groups in Iraq, Syria, Lebanon, Yemen and the Palestinian territories. He said it was up to those groups to decide if and how they would retaliate.

He praised Soleimani and said “the shoe of Qassem Soleimani is worth the head of Trump and all American leaders.”

Soleimani’s killing escalated the crisis between Tehran and Washington after months of trading attacks and threats that have put the wider Middle East on edge. The conflict is rooted in Trump pulling out of Iran’s atomic accord and imposing crippling sanctions.

Iran has promised “harsh revenge” for the U.S. attack, which shocked Iranians across all political lines. Many saw Soleimani as a pillar of the Islamic Republic at a moment when it is beset by U.S. sanctions and recent anti-government protests. 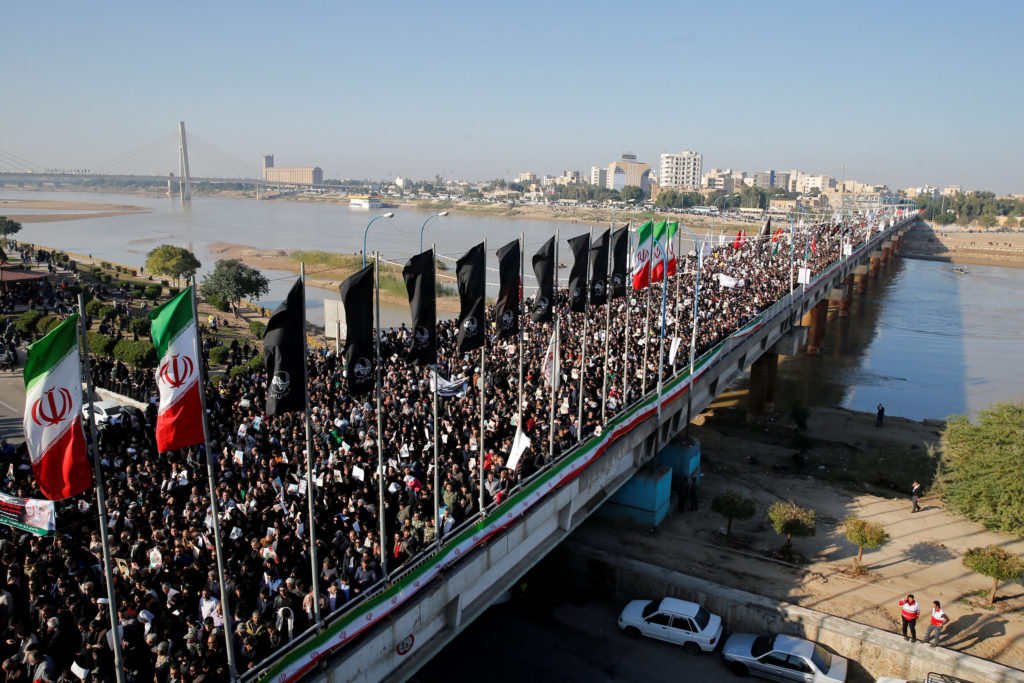 Retaliation for Soleimani could potentially come through the proxy forces which he oversaw as the head of an elite unit within the paramilitary Revolutionary Guard. Soleimani’s longtime deputy Esmail Ghaani already has taken over as the Quds Force’s commander.

The U.S. Embassy in Saudi Arabia separately warned Americans “of the heightened risk of missile and drone attacks.”

Late Saturday, a series of rockets launched in Baghdad fell inside or near the Green Zone, which houses government offices and foreign embassies, including the U.S. Embassy.

Trump wrote on Twitter afterward that the U.S. had already “targeted 52 Iranian sites (representing the 52 American hostages taken by Iran many years ago), some at a very high level & important to Iran & the Iranian culture.”

Trump did not identify the targets but added that they would be “HIT VERY FAST AND VERY HARD.”

The 1954 Hague Convention, of which the U.S. is a party, bars any military from “direct hostilities against cultural property.” However, such sites can be targeted if they have been re-purposed and turned into a legitimate “military objective,” according to the International Committee of the Red Cross.

Iran, home to 24 UNESCO World Heritage sites, has in the past reportedly guarded the sprawling tomb complex of the Islamic Republic’s founder, Ayatollah Ruhollah Khomeini, with surface-to-air missiles.

After thousands in Baghdad on Saturday mourned Soleimani and others killed in the strike, authorities flew the general’s body to the southwestern Iranian city of Ahvaz. An honor guard stood by early Sunday as mourners carried the flag-draped coffins of Soleimani and other Guard members off the tarmac.

The caskets then moved slowly through streets choked with mourners wearing black, beating their chests and carrying posters with Soleimani’s portrait. Demonstrators also carried red Shiite flags, which traditionally both symbolize the spilled blood of someone unjustly killed and call for their deaths to be avenged.

Officials brought Soleimani’s body to Ahvaz, a city that was a focus of fighting during the bloody, 1980-88 war between Iraq and Iran in which the general slowly grew to prominence. After that war, Soleimani joined the Guard’s newly formed Quds, or Jersualem, Force, an expeditionary force that works with Iranian proxy forces in countries like Iraq, Lebanon and Yemen.

Authorities then took Soleimani’s body to Mashhad later Sunday. His remains will go to Tehran and Qom on Monday for public mourning processions, followed by his hometown of Kerman for burial Tuesday.

This marks the first time Iran honored a single man with a multi-city ceremony. Not even Khomeini received such a processional with his death in 1989. Soleimani on Monday will lie in state at Tehran’s famed Musalla mosque as the revolutionary leader did before him.

Soleimani was the architect of Iran’s regional policy of mobilizing militias across Iraq, Syria and Lebanon, including in the war against the Islamic State group. He was also blamed for attacks on U.S. troops and American allies going back decades.

Though it’s unclear how or when Iran may respond, any retaliation was likely to come after three days of mourning declared in both Iran and Iraq.

Iranian officials planned to meet Sunday night to discuss taking a fifth step away from its 2015 nuclear deal with world powers, one that could be even greater than planned, Foreign Ministry spokesman Abbas Mousavi told journalists.

“In the world of politics, all developments are interconnected,” Mousavi said.

Iran previously has broken limits of its enrichment, its stockpiles and its centrifuges, as well as restarted enrichment at an underground facility.

After the airstrike early Friday, the U.S.-led coalition has scaled back operations and boosted “security and defensive measures” at bases hosting coalition forces in Iraq, a coalition official said on condition of anonymity according to regulations.

Meanwhile, the U.S. has dispatched another 3,000 troops to neighboring Kuwait, the latest in a series of deployments in recent months as the standoff with Iran has worsened. Protesters held demonstrations in dozens of U.S. cities Saturday over Trump’s decisions to kill Soleimani and deploy more troops to the Mideast.

In a thinly veiled threat, one of the Iran-backed militias, Asaib Ahl al-Haq, or League of the Righteous, called on Iraqi security forces to stay at least a kilometer (0.6 miles) away from U.S. bases starting Sunday night. However, U.S. troops are invariably based in Iraqi military posts alongside local forces.

The Iranian parliament on Sunday opened with lawmakers in unison chanting: “Death to America!” Parliament speaker Ali Larijani compared Soleimani’s killing to the 1953 CIA-backed coup that cemented the shah’s power and to the U.S. Navy’s shootdown of an Iranian passenger plane in 1988 that killed 290 people. He also described American officials as following “the law of the jungle.”

“Mr. Trump! This is the voice of Iranian nation. Listen!” Larijani said as lawmakers chanted.

A spokesman for Iran’s armed forces, Gen. Abolfazl Shekarchi, likewise threatened the U.S. by saying Iran and the “resistance front will decide the time, place and way” revenge will be carried out.

Iraq’s parliament is meeting for an emergency session Sunday. Its government has come under mounting pressure to expel the 5,200 American troops who are based in the country to help prevent a resurgence of the Islamic State group.

The U.S. has ordered all citizens to leave Iraq and temporarily closed its embassy in Baghdad, where Iran-backed militiamen and their supporters had recently staged two days of violent protests in which they breached the compound. Britain and France have warned their citizens to avoid or strictly limit travel in Iraq, as London said it would begin escorting ships through the Strait of Hormuz. Oman, long an interlocutor between Iran and the West, urged Tehran and Washington on Sunday to pursue dialogue.

No one was hurt in the embassy protests, which came in response to U.S. airstrikes that killed 25 Iran-backed militiamen in Iraq and Syria. The U.S. blamed the militia for a rocket attack that killed a U.S. contractor in northern Iraq.

Left: Lebanon's Hezbollah leader Sayyed Hassan Nasrallah addresses the crowd in Beirut's suburbs, Lebanon, January 5, 2020, via a screen during a funeral ceremony rally to mourn Qassem Soleimani, head of the elite Quds Force, who was killed in a U.S. air strike. Photo by Aziz Taher/Reuters