HONG KONG — Police in Hong Kong fought with protesters on Sunday as they broke up a demonstration by thousands of people demanding the resignation of the semi-autonomous Chinese territory’s chief executive and an investigation into complaints of police violence.

The protest in the northern district of Sha Tin was peaceful for most of the day, but scuffles broke out when police started clearing streets after nightfall. Some protesters retreated into a shopping complex where they and police hit each other with clubs and umbrellas.

Police appeared to arrest some people, but reporters couldn’t see how many. The violence wound down toward midnight as the remaining protesters left the area.

The demonstration added to an outpouring of grievances this year against the former British colony’s leaders. Critics complain they are eroding Hong Kong’s freedoms and autonomy and are more responsive to the Beijing government than to the territory’s people. The mainland promised Hong Kong a “high degree of autonomy” for 50 years after its 1997 return to China.

Police on Saturday broke up a protest in a separate area of Hong Kong complaining about an influx of mainland traders. 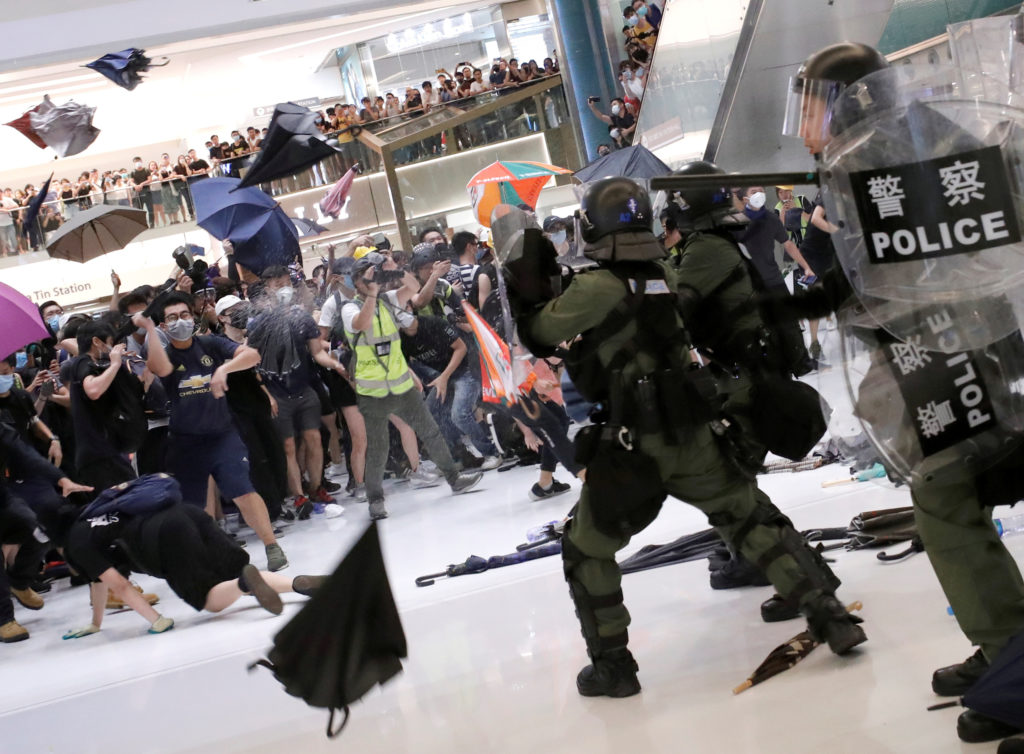 Organizers said 110,000 protesters took part, while police put the number at 28,000, according to broadcaster RTHK.

A government statement said the afternoon march was “peaceful and orderly” but that afterward some protesters “violently assaulted police officers.”

“Society will absolutely not tolerate such violent acts,” the statement said.

The protests began last month in opposition to a proposed extradition law but have swelled to include complaints about an influx of mainland Chinese into Hong Kong and that Chief Executive Carrie Lam’s government fails to address the needs of its people.

Communist authorities have tried to discredit the protesters by saying unidentified “Western forces” are inciting them to destabilize Hong Kong. Protesters deny foreigners have had any role in the demonstrations.

On Sunday, protesters demanded an investigation into complaints that police assaulted participants in earlier demonstrations against the extradition law.

Starting at about 3 p.m., they filled three streets radiating out from an intersection in Sha Tin, a crowded neighborhood of office and apartment buildings, shopping malls and hotels. Some carried signs reading “Police Are Liars.” Other signs read “Defend Hong Kong.”

At about 8:30 p.m., police in green fatigues with helmets and shields cleared the streets by walking shoulder-to-shoulder toward the intersection. Some protesters threw bricks but most withdrew peacefully and watched the police.

Many protesters appeared to leave the area, while others entered the shopping-and-apartment complex at the intersection. Reporters couldn’t see how many protesters still were in the area.

Inside the complex, protesters threw umbrellas — a symbol of the protests — and water bottles.

The violence wound down as most of the remaining protesters fled to an adjacent subway station and left aboard crowded trains. 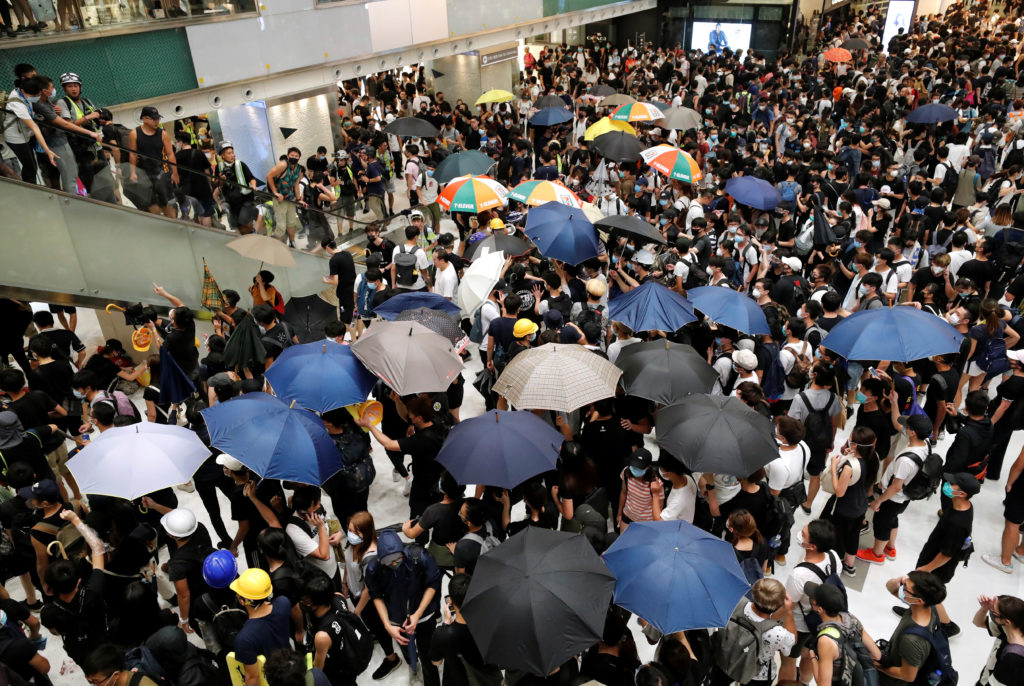 Pro-democracy protesters hold umbrellas inside a mall as they face the riot police after a march at Sha Tin District of East New Territories, in Hong Kong, China July 14, 2019. Photo by Tyrone Siu/Reuters

“I think there is now a huge problem on how the police enforce the law,” said Nelson Yip, a protester in his 40s.

Lam’s government suspended action last month on the extradition bill. It would have allowed Hong Kong crime suspects to be transferred to the mainland, where the ruling Communist Party controls the court system.

Lam apologized for her handling of the legislation, but critics are demanding she resign.

On Saturday, police used clubs and tear gas to break up a crowd of mostly young protesters who called for tighter control on mainland traders who visit Hong Kong. Critics say they are improperly undercutting Hong Kong businesses.

“The police seem to have become even more violent,” said Peggie Cheung, 59, who joined Sunday’s protest. “Coming out on the streets feels like a responsibility to me.”

“It seems that they have deliberately targeted the journalists,” said Chris Yeung, chairman of the Hong Kong Journalists Association.

Police issued a statement promising better training for officers and communication with reporters.

“There is room for improvement,” the statement said. It promised “appropriate follow up actions” for complaints of mistreatment.