HONG KONG — With subway services shut down, the wearing of face masks criminalized at rallies and Hong Kong’s leader reaffirming her determination not to let rioters get the upper hand, anti-government protests that have shaken the city diminished in intensity Saturday but didn’t stop.

Marchers still came out to defy the new ban on face coverings that the government of the semi-autonomous Chinese territory says have made the identification of violent protesters difficult for police. Shielded under umbrellas, many wearing masks, several hundred demonstrators clogged a thoroughfare in the central business district, carrying a yellow banner marked “Glory to Hong Kong” and shouting, “Hong Kong, resist!”

Scattered gatherings of protesters in masks popped up elsewhere, too, with some holding hands in a human chain. But protester numbers Saturday afternoon appeared down from previous weekends when tens of thousands flooded the streets.

A combination of factors seemed to be at work. Some marchers said the protest movement that has plunged Hong Kong into its deepest crisis since its handover from British to Chinese rule in 1997 was merely harboring strength for the long haul. 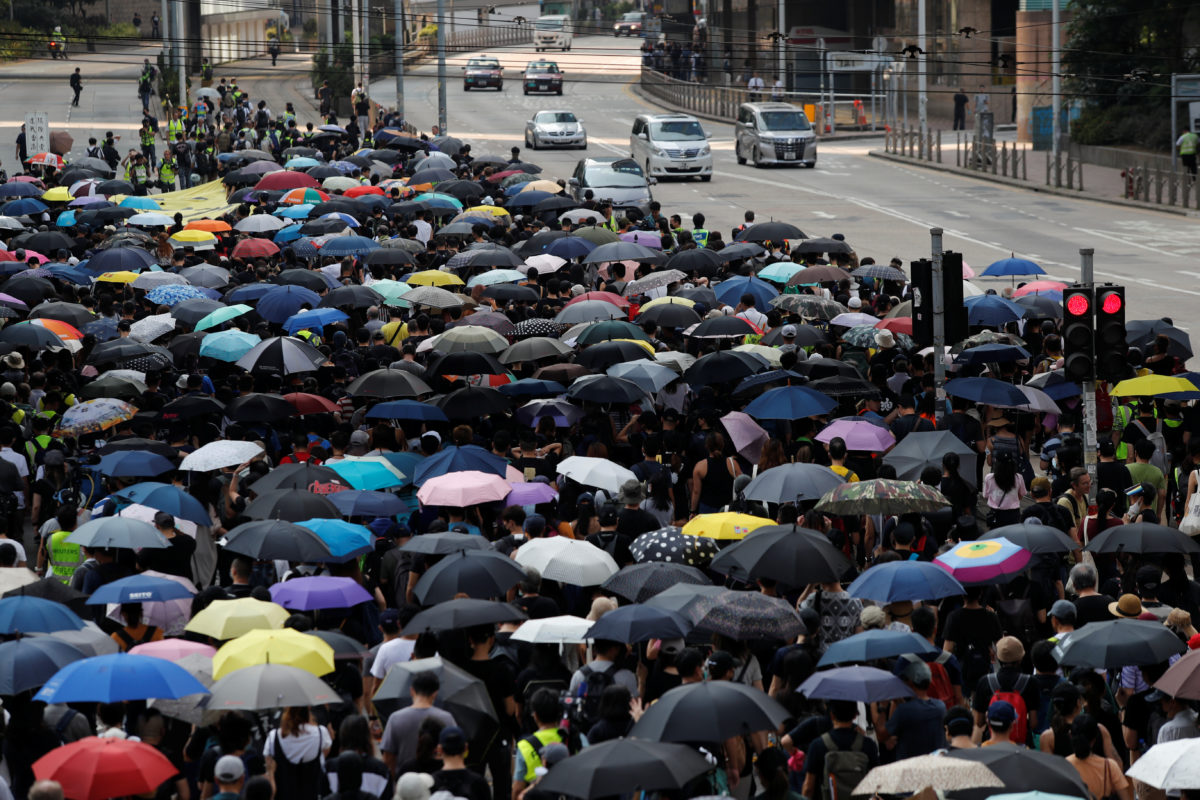 The closure of the entire MTR network of subway and trains that habitually handles more than 4 million trips a day also caused major disruption to the usually never-resting but now edgy and restive city of 7.5 million people. An express link to Hong Kong international airport also closed for a while before reopening with reduced service Saturday afternoon.

“From MTR to EmptyR,” tweeted activist Joshua Wong, a key player in 2014 protests that foreshadowed the past four months of demonstrations that have snowballed into a sustained flare of anti-government and anti-China fury.

“Can’t go anywhere,” said Kevin Cui, a tourist from mainland China who’d planned to visit Hong Kong Disneyland only to discover at a shuttered subway station that the network was suspended. “This is very troublesome.”

Following up on its face-mask ban that went into effect at midnight Friday, the government also hammered home a get-tough message that it would not bow to rioters and appealed for public support after an overnight rash of widespread violence, including arson attacks. Citizens awoke Saturday not only to closed subway stations but also shuttered shops and banks, where lines formed at cash machines.

In a televised address broadcast as protesters again marched in masks, a solemn Carrie Lam, the city’s chief executive, described Hong Kong as “semi-paralyzed” and said, “Everyone is worried, anxious, or even scared.”

“The government needs to take drastic measures to say no to violence, restore peace in society, protect citizens’ right to continue their daily lives and freedom, not allowing a small group of rioters to destroy it,” she said.

John Lee, the government’s security secretary, said by not condemning violence, people are stoking it.

“What is adding oil to violence is people’s support for these acts,” he said. “What is important is that everybody comes out to say, ‘No, society will not accept violence.'”

Some agreed, even as they continued to blame Lam for sparking the protest movement with a now abandoned measure that would have allowed criminal suspects to be extradited for trial in Communist Party-controlled courts in mainland China.

“There is outright rioting,” said retiree Peter Tai, 67, stocking up on groceries for fear they’d become hard to find.

“Protesters want democracy and freedom, but don’t they have freedom now? People can go anywhere and do things freely. Freedom is more valuable than democracy. I hope these young people don’t do things they’ll regret forever,” he said.

But many peaceful protesters say violence has become a means to an end, the only way for young masked protesters to force the government to bend to clamors for full democracy and other demands.

As a group of black-clad youths in protective gear rushed past him, many carrying bamboo sticks, a property industry worker who came out with his wife Friday night to show his opposition to the mask ban expressed his admiration for those confronting police.

“I know they have done terrible things” he said. “Can you believe how brave they are?”

He gave only his first name, Alex. He and his wife, Pauline, both donned masks that covered their mouths to hit streets in central Hong Kong, where clouds of police tear gas to disperse protesters also caused spluttering tourists and Friday night revelers to flee, eyes stinging.

An officer fired a single shot from his gun in self-defense after he was attacked by protesters in the northern Yuen Long district, said police spokeswoman Yolanda Yu. She said a man was wounded, but police didn’t know exactly how he got shot. A police official, who requested anonymity because he wasn’t authorized to speak to the media, said the victim is 14. A Hospital Authority spokesman said the teen was in serious but not critical condition.

The teen became the second victim of gunfire in the protests that began in June. An 18-year-old protester was also shot at close range by a riot police officer on Tuesday.