HONG KONG (AP) — A Hong Kong university student who fell off a parking garage after police fired tear gas during clashes with anti-government protesters died Friday in a rare fatality after five months of unrest, fueling more outrage against authorities in the semi-autonomous Chinese territory.

Some 1,000 masked protesters marched through the busy central district at lunchtime, chanting “Disband the police force,” ”Hong Kong people, revenge” and “A blood debt must be paid in blood.” Some carried white flowers and placards that read “Hong Kong is a police state.”

“His death is a reminder to us that we cannot give up,” one protester said on local television. 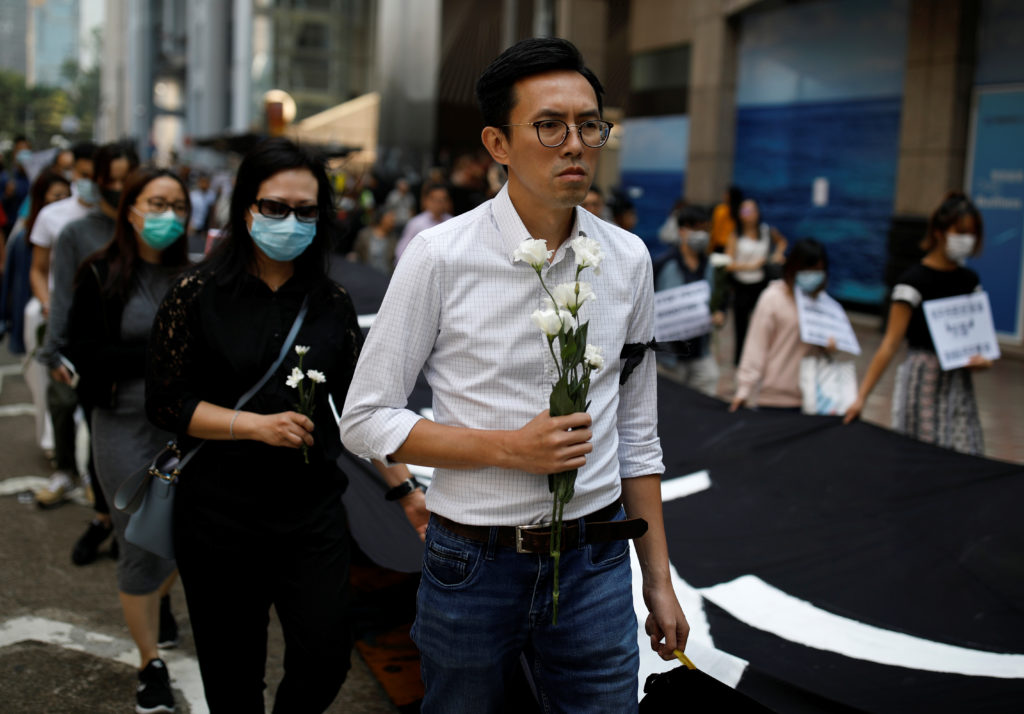 People attend a rally after the news broke that Chow Tsz-lok, 22, a university student who fell during protests at the weekend, died early on Friday morning, in Hong Kong, China November 8, 2019. Photo by Ahmad Masood/Reuters

Although the cause of his fall has not been determined, it deepened anger against police, who have been accused of heavy-handed tactics including widespread use of tear gas and pepper spray since protests demanding democratic reforms started in June. It will also complicate efforts by the government to cool down tensions.

Chow had reportedly been in a coma with brain injury since he was found early Monday sprawled in a pool of blood on the second floor of the building. Police believed he plunged from an upper floor but it wasn’t captured on security cameras.

Minutes earlier, television footage showed riot police firing tear gas at the building after objects were hurled down at the officers in the street when they chased off a mob. Police didn’t rule out the possibility he was fleeing from tear gas but noted officers fired from a distance.

Police official Suzette Foo later Friday repeatedly denied claims that officers pushed the victim down and had delayed emergency services. She said police entered the building late Sunday for a dispersal operation before Chow arrived and a second time just after he was found unconscious.

New footage showed Chow wandering alone in the car park for more than half an hour on the second floor before he took the stairs to an upper floor, she said. Minutes later, he was found dead. She said his movement was normal. It wasn’t clear either if Chow had taken part in the protests.

Foo told a news conference that the force will be impartial and will “spend every effort” to get to the bottom of his death. Police will recommend a public inquest so that the facts of the case can be laid out in the open, she added.

There have been only few fatalities during the unrest, some reportedly deaths by suicide and a man who fell to his death while hanging pro-democracy banners on a building. Last month, two teens were injured after police fired their guns in self-defense in separate incidents but both recovered.

The president of the University of Science and Technology, where Chow studies, dabbed away tears as he announced Chow’s “tragic” death during a graduation ceremony, with the audience standing to observe a moment of silence.

The ceremony was cut short, and black-clad masked students turned the stage into a memorial for Chow. White flowers were laid below the stage as students announced plans to boycott class for a week and demanded the truth in Chow’s death.

WATCH: Globally, people are taking their discontent to the streets

Calls have emerged online for other memorial events Friday to mourn Chow in multiple locations including at the suburban garage where he fell. Protesters have been urged to dress in all black and wear masks. More rallies can be expected over the weekend.

“What I want to say is that at present, the most urgent thing for Hong Kong is to stop violence and restore order,” he added.

The protests were sparked by a now-shelved extradition bill to mainland China that many sees as Beijing’s creeping interference on legal and other rights guaranteed to Hong Kong when the former British colony returned under Chinese rule in 1997. The movement has since expanded to include other demands, including direct elections for the city’s leaders.

The city’s embattled leader Carrie Lam provoked more anger last month by invoking emergency powers to ban the wearing of facial coverings at rallies. More than 3,300 people have been arrested and Beijing has indicated it may tighten its grip to quell the unrest.

Left: A graduate cries as she paying tribute with flower to Chow Tsz-lok, 22, a university student who fell during protests at the weekend and died early on Friday morning, at the Hong Kong University of Science and Technology, in Hong Kong, China November 8, 2019. Photo by Tyrone Siu/Reuters