How Brexit became a ‘glass cliff’ for Theresa May

After two years of negotiations and a failure to deliver on a Brexit deal for Britain, Prime Minister Theresa May announced Friday that she would resign, effective June 7. May leaves office months before the delayed Brexit vote on October 31.

Unpopular with members of Parliament, May has been called “weak,” and her negotiations “shameful,” among a litany of other insults.

But political scientists and sociologists look at what happened to May — as well as a number of other female political and business leaders pressed into service to resolve crisis situations — and see a phenomenon known as the “glass cliff.”

What is the glass cliff?

The term, coined by University of Exeter professors Michelle Ryan and Alex Haslam Prior, is used to describe situations in which women are more likely to be appointed to leadership roles during a decline or chaotic moment. It’s most often used to describe scenarios in the business world.

“Glass cliff” purposefully plays off the far more familiar term “glass ceiling,” used to describe obstacles that confront women and minorities as they try to advance professionally. The glass cliff goes further to describe what happens when a woman steps into a senior role that is somehow risky or precarious, and when she is nevertheless subsequently blamed for the outcome.

One of the best known examples is Marissa Mayer, whose five years as the last CEO of Yahoo! before it was sold to Verizon, were fraught with turmoil. The platform experienced a massive data breach where hackers stole the names, birth dates and phone numbers of all of its 3 billion users. Insiders at the company called her an indecisive micromanager and called for her resignation. But Yahoo!’s problems had started years earlier. It had long struggled to brand itself and stay relevant amid the rise of companies like Facebook, Google and Instagram. Yahoo! went through five different CEOs in five years before Mayer took the helm.

READ MORE: Why women are often put in charge of failing companies

Meg Whitman, who had made online auctioneer eBay a household brand, was named Hewlett-Packard CEO after its last chief left amid financial trouble at the company. Six years later, Whitman stepped down after what some critics saw as an unsuccessful attempt to break up Hewlett-Packard into two smaller businesses. She was also skewered for failing to deliver on a promise to turn around the company within five years.

In 2014, Mary Barra became the first woman to lead a major car company as CEO of General Motors, which was struggling to survive after a bankruptcy bailout in 2009. Barra faced criticism in her first year as CEO after it was discovered that GM had ignored ignition switch problems linked to the deaths of 124 people. While Barra faced the glass cliff, she has largely been seen as a success story, having turned around the business with solid profits.

There are fewer prominent examples of the glass cliff within politics, but Alison Cook, a researcher at Utah State University who has studied the phenomenon, said May fits into the paradigm “perfectly.”

Nearly three years ago, May became just the second female prime minister in the UK’s history–an honor she acknowledged when announcing her resignation. When May assumed her role, it was already clear she had a difficult task ahead of her. The UK had just voted to leave the European Union, a result that shocked not only the nation, but the world, and no one knew exactly what “leaving” would entail. After the Brexit referendum, then-Prime Minister David Cameron resigned, leaving his successor to carry out the public’s decision. 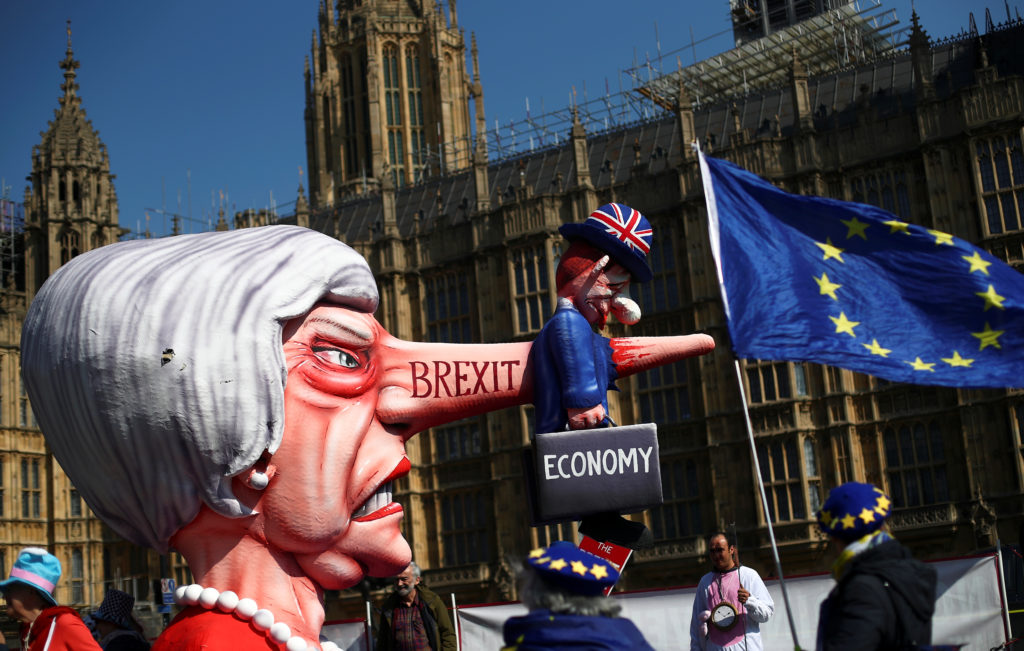 A figure depicting Britain’s Prime Minister Theresa May is pictured outside the Houses of Parliament in London, Britain, on April 1, 2019. Photo by REUTERS/Hannah Mckay

May had originally campaigned to stay in the EU. But in stepping up to succeed Cameron, May wanted to respect the vote of the British people and promised a “full” exit from the EU.

But that promise was extraordinarily difficult to keep. As her repeated Brexit negotiations failed to garner support, many members of Parliament began calling for her resignation. In March, conservative MP Steve Baker said it was time for May to “make way” for another leader who could deliver on a withdrawal agreement. A poll of Britons conducted by Politico in mid-March found half of respondents thought May should resign, compared to 32 percent who believed she shouldn’t.

Critics say May knew what she was getting herself into. After all, the job was not thrust upon her. She campaigned for it.

But, even if May wanted the position, there are reasons why she — rather than a man — might have found herself standing on the edge of this precipice.

What leads to the glass cliff?

Women and minorities are often chosen as leaders in moments of transition because a company or country is looking for the “atypical” to show they are headed in a bold, new direction to regain their footing, according to Clara Kulich, who began analyzing the glass cliff phenomenon in 2004 with Michelle Ryan at the University of Geneva.

Women are often seen as better communicators and more adept at handling conflict situations, Kulich said. Often it’s not actually about whether the person is competent, but what she symbolizes.

The symbolism comes from the stereotype of women as comforting or nurturing, said Christy Glass, who works with Cook at Utah State University. She calls it the “think crisis, think female” tendency.

Female politicians’ “falls are more visible because their rises are so visible.”

When it comes to politics, women are often elected because they are seen as less violent, corrupt or self-promoting, said Farida Jalalzai, the head of the political science department at Oklahoma State University, who studies women’s issues. However, Jalalzai’s research also suggests that when women do not fit those stereotypes by being perceived as too politically calculating or self-aggrandizing — a criticism Hillary Clinton has faced for decades — they can face a different kind of backlash.

Furthermore, because their leadership opportunities are fewer, Glass said that women and minorities are also more likely to accept a position with a company — or, in May’s case — country in turmoil.

As part of her research, Glass spoke with several women who said their choice to step into a role at a time of risk was a deliberate career move. While men are more willing to turn these jobs down because they are likely to get a better opportunity, women or minorities often cannot afford to do the same, Glass said.

These trends also appear along racial lines. Minorities are more likely to be appointed as head coaches for struggling basketball teams, for example. Research shows that Asian Americans experience the glass cliff as well, because they are often stereotypically associated with being “self-sacrificing” in taking on these types of roles.

Announcing her resignation in front of 10 Downing Street in London, May said she had done everything she could to convince UK lawmakers to back a Brexit deal. “Sadly, I have not been able to do so,” she said.

Seventy-seven countries have never had a female head of state, including the United States, according to a 2017 analysis by the Pew Research Center. In 42 countries, women have collectively served less than four years as heads of state. In only five countries have women been in charge for 15 or more years.

While other female politicians might not fit the glass cliff scenario, they are often held to a different standard compared to their male peers.

Making “one mistake serves as confirmation bias, and no one can do their best under these conditions,” Glass said. Furthermore, once a woman does “poorly” in a leadership position, it can become a deterrent for electing a woman to that role in the future. 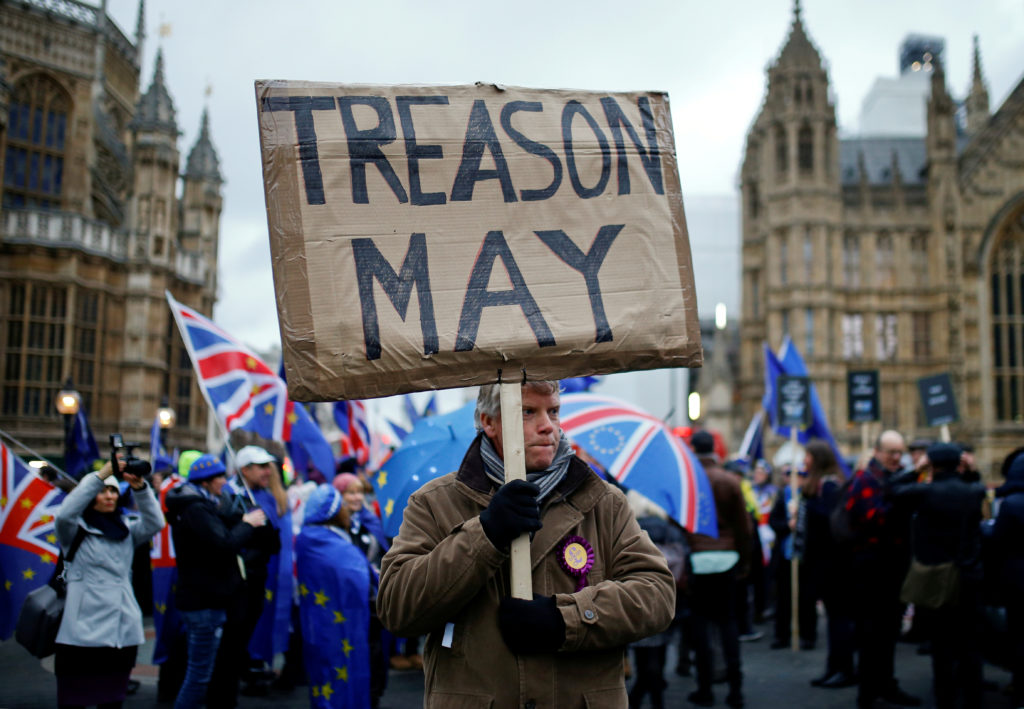 A pro-Brexit protester holds a banner as anti-Brexit protesters demonstrate outside the Houses of Parliament, ahead of a vote on Prime Minister Theresa May’s Brexit deal, in London on Jan. 15, 2019. Photo by REUTERS/Henry Nicholls

Former Brazilian President Dilma Rousseff, for example, was impeached in 2016 after being implicated in a corruption investigation, Jalalzai pointed out, even though the accusations against her were never fully substantiated.

Female politicians’ “falls are more visible because their rises are so visible,” Jalalzai said.

The odds favor a white man assuming the role of prime minister next after May not only because men make up two-thirds of Parliament, researchers say, but because of what’s known as the “savior effect.” Because a woman has been given the chance to resolve the crisis and is perceived to have failed, voters or corporate board members are more likely to choose what they see as the safe option: a white man, Glass said.

Former foreign secretary Boris Johnson appears to be the early front-runner in what is expected to be a crowded field of contenders to replace May.

As for future women leaders, Kulich said the first step to eliminating the glass cliff is being aware of the problem. The second is to put more women in various positions of power, such as in legislatures or on boards of directors.

“We need more women in high-profile roles,” said Glass. “Women must stop being the exception to the rule.”

After another failed vote, what’s next for Brexit?