Years ago, when Bushra Aldukhainah was a young woman, she loved to spend time with her family in al-Hudaydah, a western coastal city and the location of Yemen’s key Hudaydah port. She remembers walking across the boardwalk area, staring into the blue water as schools of fish swam by and massive boats pushed through the tide.

Now, on most days, Hudaydah port is eerily quiet, as Saudi-led coalition airstrikes bombard the country and an on-again, off-again air and sea blockade cuts off humanitarian aid from its residents, also making travel to and from Yemen difficult.

The Yemen that Aldukhainah once knew is undergoing what United Nations Secretary-General Antonio Guterres described as the world’s worst humanitarian crisis since World War II.

Seventy-five percent of Yemenis in the country are in need of humanitarian assistance as the country enters its fourth year of war.

Yemen has been in a state of war since 2014, after the Houthis, a militant group operating within Yemen, began urging Hadi to step down and for the reinstatement of fuel subsidies and a more representative government. Eventually, the Houthis, allied with former President Ali Abdallah Saleh, took over the capital Sanaa and ousted U.S.-backed President Abdu Rabbu Mansour Hadi. In 2015, a Saudi-led coalition began a military campaign to stop their advances. The Houthis responded to the airstrikes by firing their missiles into Saudi Arabia.

The situation in Yemen has morphed over the past few years, said Amanda Catanzono, the senior director for international programs policy and advocacy at the International Rescue Committee. “Yemen was a humanitarian crisis before the conflict … but before the spring of 2015 there was more of a national capacity to respond to emergency needs,” she said. Now, there’s virtually none.

She said it has been difficult to maintain attention on the situation in Yemen. “Distance and complexity are the enemies of action, the enemies of maintaining people’s attention,” she said.

Seventy-five percent of Yemenis in the country are in need of humanitarian assistance as the country enters its fourth year of war. Seventeen million people are food insecure – up a million from last year – and more than 8 million people do not know where their next meal will come from. 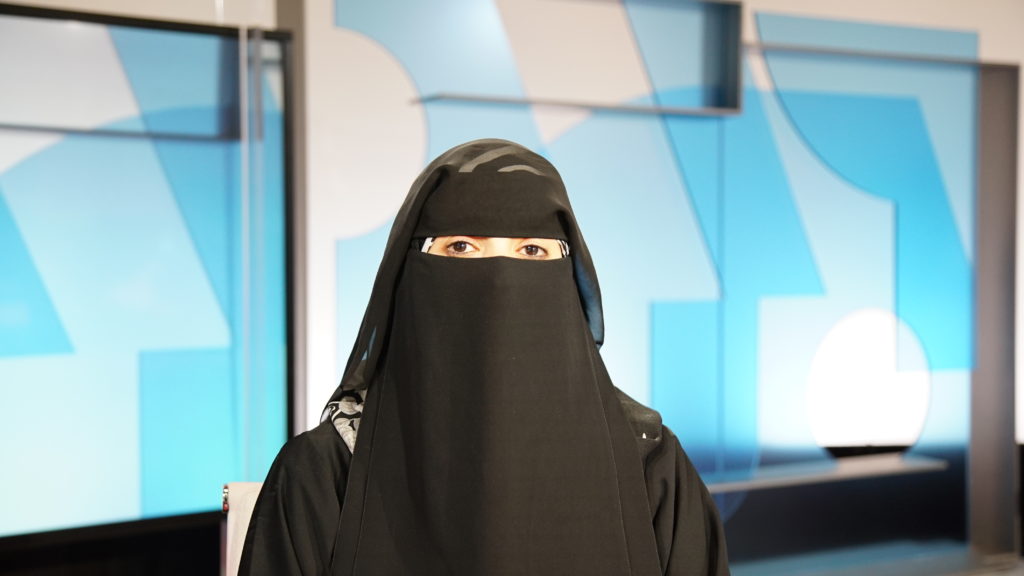 “I don’t think there’s a safe place in Yemen anymore. Airstrikes are everywhere,” she said, recalling the horror on her coworkers’ faces after a recent return from a field site where they saw dead bodies lined up along the street.

As a third wave of a cholera is set to hit Yemen this month and with the country’s infrastructure devastated, some Yemenis hope a peace plan negotiated by the United Nations will start to turn their country around.

Aldukhainah was born in Harad, Yemen, about three hours from the capital of Sanaa, in the mid-1980s. The eldest of 10 siblings with a thirst for education, Aldukhainah completed two master’s degrees — one in India and one in the United Kingdom.

“We have very smart girls in Yemen who love education. I was one of them,” Aldukhainah said.

She had dreams for an education and a successful job. She started at CARE working on the development team, but in 2013, had to put all of her focus on emergency and life-saving operations.

“The first thing my son did was look at me and say, ‘You should have let me take my toys.'”

On April 27, 2015, Aldukhainah woke up in the middle of the night to the sound of bombs. Just the day before, an airstrike targeted an Internally Displaced Persons (IDP) camp in Harad where Aldukhainah was distributing aid with other CARE humanitarian workers. A month before, in March 2015, another airstrike hit an IDP camp in north Yemen, killing at least 40 people.

“I’ve seen the dead bodies of children and men and women who I knew in [the IDP camp] with my own eyes,” she said. More than 2 million people are internally displaced in Yemen.

“The IDP camps in this war were the first to be targeted, so now people are afraid to even gather in camps and have instead pitched tents in isolated areas,” Aldukhainah said. 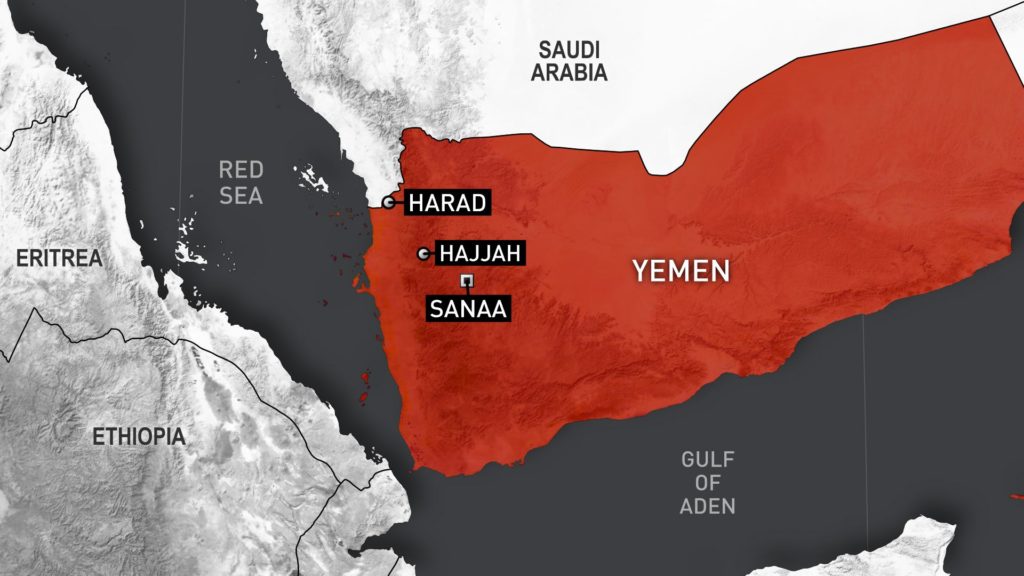 Right before they fled, Aldukhainah remembers her son asking her if he could take his toys with him.

“I told him we would come back for them — in a matter of two weeks, a month … I remember the bitterness of leaving home and leaving everything behind us, of being displaced,” she said.

Two months later, Aldukhainah’s house in Yemen was completely destroyed in an airstrike.

“The first thing my son did was look at me and say, ‘You should have let me take my toys,’” she said.

Two months after airstrikes began targeting Hara, bombs also began dropping on Hajjah city. But she stayed to oversee the city, along with nearby Hodaydah and Mahwit, for CARE.

Aldukhainah’s cousin along with her cousin’s son died in the airstrike. That son was her own son’s best friend, and Aldukhainah says he hasn’t been the same since.

Yemen was already the poorest country on the Arabian peninsula before the war, with 44 percent of its population undernourished and 5 million people in need of emergency aid. Before the violence, Yemen imported nearly 90 percent of its food staples, and almost all of its fuel and medicine.

Seaports in Yemen were blockaded by Saudi Arabia through part of 2017, but are now open to humanitarian aid and commercial shipments. 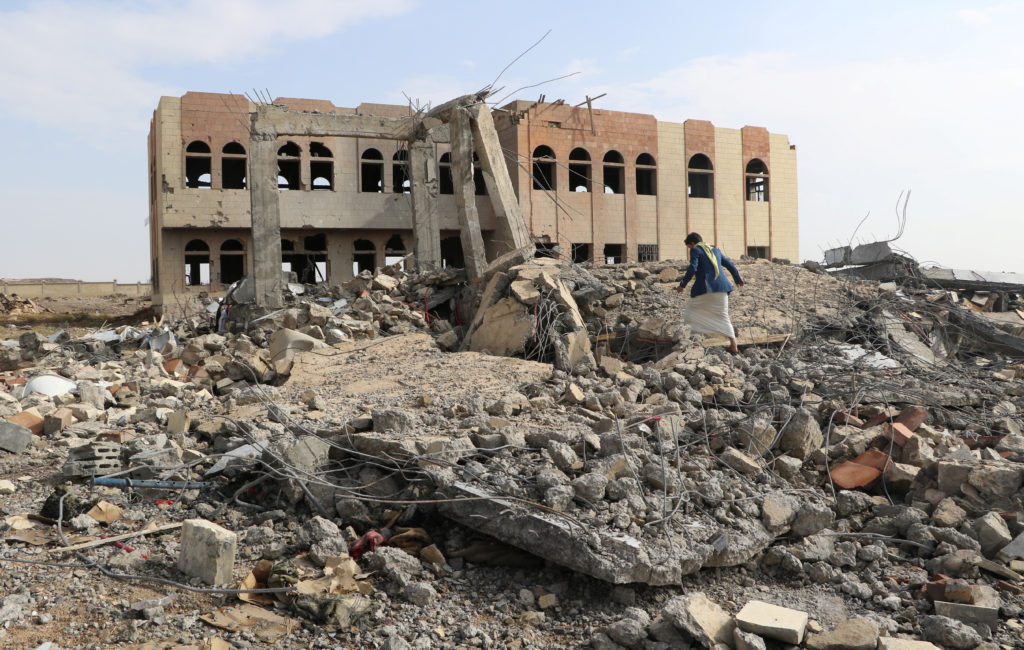 Site of an airstrike that destroyed the Community College in Saada, Yemen on April 12. Photo by Naif Rahma/Reuters

Civilians are at greatest risk of violence in Yemen, facing indiscriminate attacks, snipers, cross-fire, kidnapping and arbitrary detention, bombing and rape. In February alone, 53 children were killed and 92 were maimed in 12 governorates in Yemen, according to the Office for the Coordination of Humanitarian Affairs.

The destruction of basic infrastructure systems as a result of the airstrikes exacerbates the spread of cholera and other disease. Today, a child dies every 10 minutes in Yemen of preventable causes, according to the U.N.

More than half of all health facilities in the country are either closed completely or partially functioning, and most hospital staff are volunteers, not receiving consistent salary payments for more than eight months. And more than 2,500 schools have been damaged and one-quarter of school-aged children are not in school.

“What would you do if you were in this situation. Would you accept it?”

“How many parents have the fear of sending their kids to school. Fear of not knowing if they will come home or not … Just look at this from parent’s perspective, look at how many mothers and fathers must bury their own children in Yemen,” Aldukhainah said.

“What would you do if you were in this situation. Would you accept it?” she said.

There are more than 1 million suspected cholera cases in Yemen. Cholera is a diarrhoeal infection caused by eating contaminated food or water, and is easily preventable with access to clean water but can kill within hours if left untreated. Fourteen and a half million people in Yemen lack access to clean water and safe sanitation services.

“When I was a kid I remembered reading about how cholera impacted people in the past,” Aldukainah said. “But to see it happening right in front of our eyes in Yemen is unbelievable.” 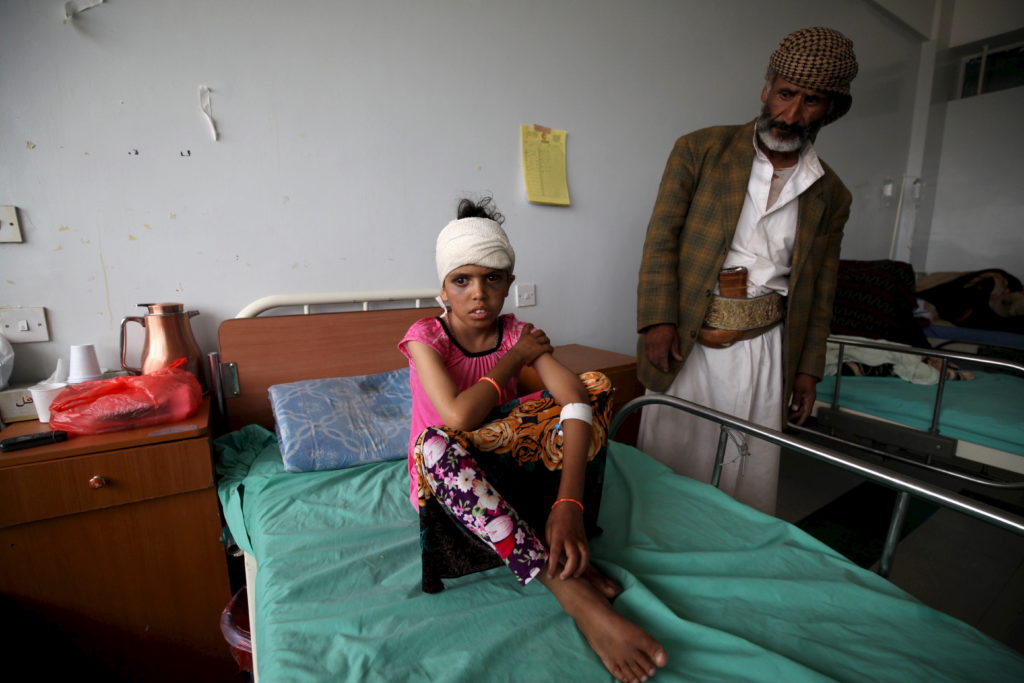 A child recovers in a hospital in Yemen’s capital Sanaa after an airstrike on July 25, 2015. Photo by Mohamed al-Sayaghi/Reuters

Martin Griffiths, the United Nations’ Yemen mediator said last month that he plans to present a new framework for negotiations to end the conflict within the next two months. U.N.-sponsored talks that began in April 2016 collapsed five months later, after another earlier set of negotiations to halt the conflict ended in December 2015 with no resolution.

Catanzano said the existing framework for negotiations, which operates on U.N. Security Council Resolution 2216, is inadequate and outdated because it does not have a binding resolution that addresses the humanitarian situation and does not reflect the violations committed by all sides.

“It’s less about if we’ll get there and more about how quickly we need to get there given the humanitarian situation … we can’t move toward a negotiation with the airstrikes intensifying,” she said, adding that a ceasefire should be the first order of business.

Aldukhainah, for her part, said, “A diplomatic solution is the only way to bring peace to Yemen, to bring everybody to the table and agree to stop killing innocent people.”

Aldukhainah now lives in Hajjah city with her husband and son, who is now 12. It’s been years since she has been able to travel safely throughout the country, but she says she still remembers passing through lush green valleys and flowing rivers when visiting family.

A month ago, Aldukhainah was with her son in Sanaa, right before she was set to board a flight for the U.S.

At the end of the day, Aldukhainah said, “Yemenis just want to live a normal life with some dignity.”