In Yemen, where forces loyal to the government are clashing with Houthi rebels, millions are going hungry. Because food is so scarce, aid groups are finding they have to focus on life-saving measures and set women’s empowerment efforts aside – at least for now.

“Yemen is experiencing one of the worst humanitarian crises in the world at this point, and the aid agencies are struggling even to provide food,” said Kristine Beckerle, a Yemen researcher at Human Rights Watch. “It’s a very grim situation.”

Children were laying in hospital beds too sick and weak to even cry. Next to them sat their mothers, also fatigued but keeping vigilant watch, he said.

One woman he met told him she had to sell everything she had just to bring her sick child to the clinic. “The terrain in Yemen is very mountainous and rocky. People can’t walk. They need a means of transportation, and that comes at a cost,” Hadi said.

Even before the conflict began in 2015, Yemen had challenges in education, health and food access, said Hadi. And now, “the needs have skyrocketed.” About 14 million people don’t have enough to eat, and 7 million are in severe need of food.

Yemen imports about 90 percent of its food, mostly through sea ports. The fighting has made those routes unpredictable, resulting in soaring food prices, which consume more and more of the families’ incomes.

The World Food Program has had to cut its rations in half — one family ration is 2,100 calories per day — to feed more people. In doing so, they have been able to spread 3 million rations to about 6 million rations around the country. “It’s the only way to keep people alive,” Hadi said.

Along with skipping a meal and resorting to cheaper food that is often less nutritious, parents are resorting to desperate coping mechanisms, including marrying off their young daughters and pulling them out of school, Hadi said.

Education, which normally is a priority for parents even in conflict situations, “is becoming the least important thing for them these days,” said Hadi. “You don’t even touch on the gender issue. The discussion is hijacked by the hunger and how they have to skip meals.”

In terms of women’s rights, Yemen ranks last in the World Economic Forum’s 2016 Global Gender Gap Report, which measures the gap between men and women’s access to resources and opportunities.

“You don’t even touch on the gender issue. The discussion is hijacked by the hunger and how they have to skip meals.” — Muhannad Hadi of the World Food Program

Among the disparities, women need a male guardian to approve their marriage, and they don’t have equal rights to men in divorce, child custody or inheritance, according to a 2015 Human Rights Watch report.

Hadi said his previous work in Yemen, during the late 1990s, included promoting women and girls’ education and assisting the health sector to support pregnant and lactating women, which showed the promise of changes in society. But now, “that country is definitely going backwards,” he said. “What I see breaks the heart.” 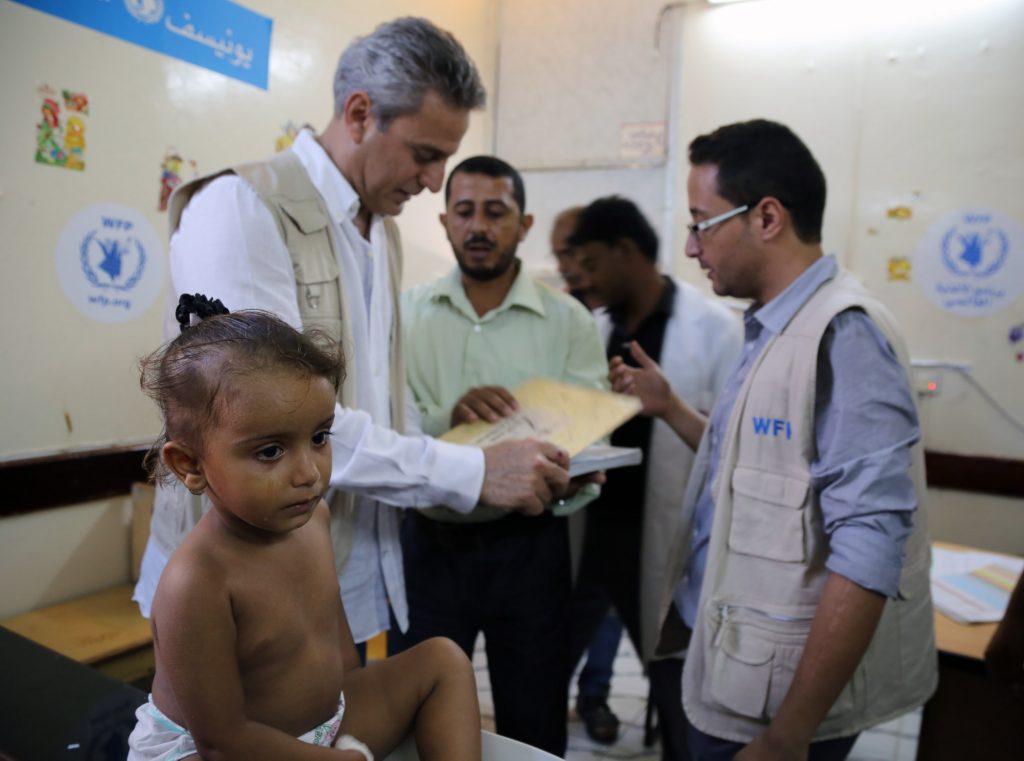 In the Middle East, the issue of gender equity has to be pushed at the national level, he said. “Sometimes we don’t feel that we’re getting the warranted or the needed support” from governmental and nongovernmental partners, and that “worries us.”

Following the Arab Spring uprising, Yemen held a National Dialogue Conference in 2013 to help carry out a peaceful transition in government. At that point, there was momentum toward better protecting women’s rights in the constitution and trying to push back against child marriage, said Beckerle.

“It’s not really a fair thing to say we need to wait until the conflict is over to deal with those matters, because we don’t know how long the conflict is going to last.” — Kristine Beckerle of Human Rights Watch

But since then, Shiite Houthi rebels ran out President Abed Rabbo Mansour Hadi, who fled to the port city of Aden and declared he was still running the government. The dueling governments make it difficult for advocates to push for any legislative changes, Beckerle said.

“Airstrikes and land mines and the fighting, to be fair, are very serious things” that need attention, she said. “But the way in which this conflict has pushed women’s rights in Yemen backward is another tragic piece to the puzzle.”

In the meantime, women’s rights activists in Yemen, who Beckerle met with in August, have observed an increase in incidents of domestic violence and forced marriage during the ongoing conflict.

“It’s not really a fair thing to say we need to wait until the conflict is over to deal with those matters, because we don’t know how long the conflict is going to last,” she said.

Left: A girl sits in a landfill, where people collect recyclables and other trash, on the outskirts of Sana'a, the capital of Yemen, on Nov. 16. Photo by Mohamed al-Sayaghi/Reuters