Shahid Choudhary, a government administrator in Srinagar, the region’s main city, said restrictions were being lifted in most areas and government offices were open. He also said on Twitter that food and other supplies were available “in abundance.”

Police said restrictions on the movement of people were relaxed in several parts of the region.

Rohit Kansal, another administrator in Srinagar, said there were six to seven minor incidents of protests in areas which remained under a lockdown, suggesting clashes with security forces. He said that eight people suffered injuries, but they were in stable condition. He didn’t give other details. 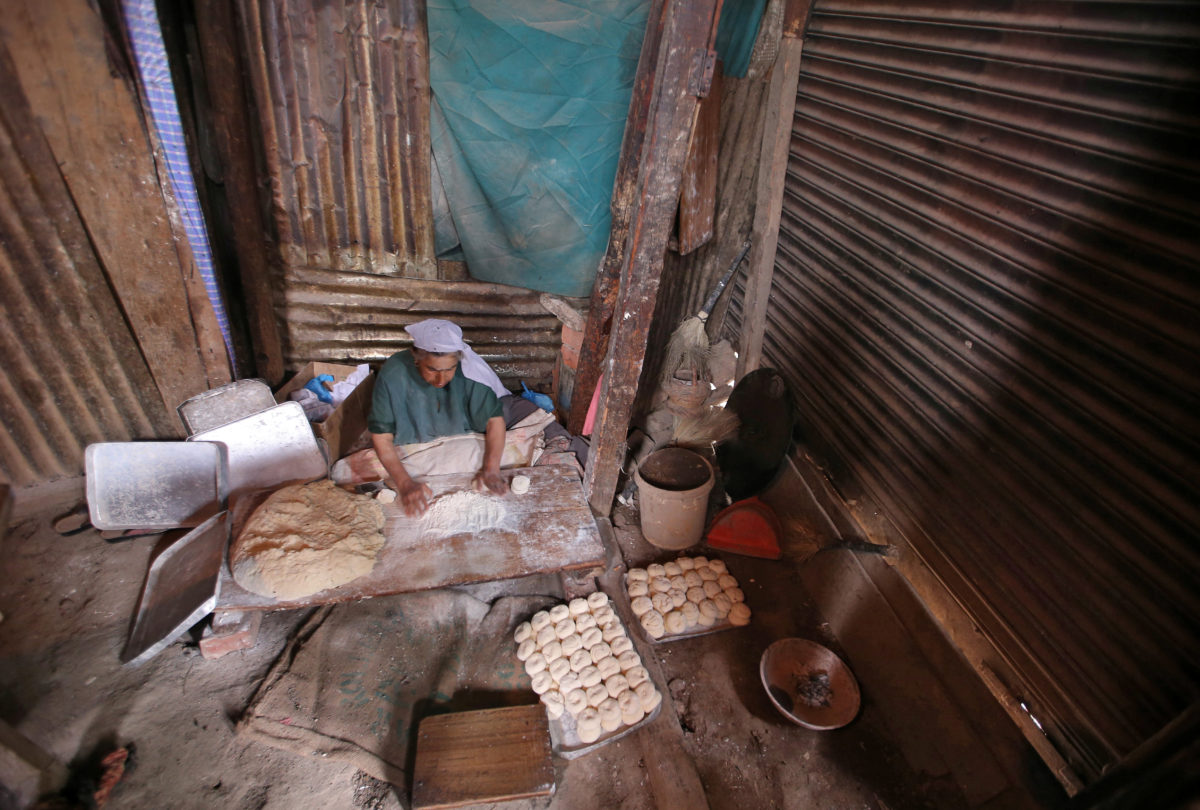 A baker prepares dough inside a bakery workshop with a closed shutter, after restrictions were eased following the scrapping of the special constitutional status for Kashmir by the Indian government, in Srinagar August 17, 2019. Photo by Danish Ismail/Reuters

Kansal told reporters that public transport buses had started operating in some rural areas in Indian-controlled Kashmir. He also said cellphone and internet services had resumed in some districts, but news reports said that happened only in the Hindu-dominated Jammu region, which was not threatened by anti-India protests.

Security forces that blanketed the region remained on high alert after hundreds of people took to the streets for an anti-India protest following Friday prayers in Srinagar.

The government had imposed the lockdown to avoid a violent reaction to its decision on Aug. 5 to downgrade the autonomy of the region. The decision by the Hindu nationalist government in New Delhi has raised tensions with Pakistan and touched off anger in the Indian-controlled portion of Kashmir.

There was a deadly exchange of gun and mortar firing between Indian and Pakistani forces Saturday across the militarized Line of Control that divides Kashmir between the archrivals. Both countries claim the Himalayan region in its entirety, and they have fought two of their three wars over Kashmir.

An Indian soldier was killed by Pakistani forces in Nowshera sector, Col. Aman Anand, an Indian army spokesman, said in New Delhi. Earlier in the week, Pakistani security forces said firing by India in the region killed three Pakistani soldiers and two civilians in separate incidents. Both sides frequently exchange gunfire in the region and accuse each other of violating a 2003 cease-fire accord.

The U.N. Security Council met to discuss Kashmir for the first time in decades, and Pakistan’s U.N. ambassador said the session showed that people in the region “may be locked up … but their voices were heard today.” The council took no action during the closed meeting, which was called for by China and Pakistan.

Khan welcomed the Security Council meeting, saying on Twitter that “addressing the suffering of the Kashmiri people and ensuring resolution of the dispute is the responsibility of this world body.”

Qureshi said the Security Council taking up Kashmir proved that it is an international dispute and not an internal matter of India as New Delhi claimed.

Kansal, the Srinagar administrator, said landline services in 17 of around 100 telephone exchanges had been made operational in Indian-held Kashmir on Saturday. Half of the region’s exchanges are expected to be in service by Sunday, he said.

Primary schools will reopen on Monday, and public transport will be restored gradually after evaluating the security situation, said B.V.R. Subrahmanyam, a senior official with the regional government.

On Friday, hundreds of demonstrators in Srinagar carried green Islamic flags and signs reading “Stop genocide in Kashmir, wake up world.” Some threw stones and clashed with security forces, which responded with tear gas.

Modi, who has defended the Kashmir changes as freeing the territory from separatism, and his supporters have welcomed the move. One of the revisions allows anyone to buy land in Indian-controlled Kashmir, which some Kashmiris fear could change the region’s culture and demographics. Critics have likened it to Israeli settlements in Palestinian territories.

India and Pakistan have fought two wars over control of Kashmir since they won independence from British colonialists in 1947. India accuses Pakistan of arming and training insurgents who have been fighting for Kashmir’s independence from India or its merger with Pakistan since 1989. Pakistan says it only provides moral and diplomatic support to rebels.

Left: Kashmiri child looks from behind a fence at a protest site after Friday prayers during restrictions after the Indian government scrapped the special constitutional status for Kashmir, in Srinagar, August 16, 2019. Photo by Danish Ismail/Reuters.