JERUSALEM — A cease-fire deal appeared to take hold between Israel and Gaza’s Hamas rulers on Sunday, with Israel expanding the permitted fishing zone and easing some tight restrictions on movement through its two main crossings with the Palestinian enclave.

Egyptian mediators have worked in recent days to broker a cease-fire agreement, but talks have been repeatedly interrupted by Palestinian rocket attacks and Israeli military reprisals. The violence has heightened tensions just over a week before Israeli national elections.

In a sign that Egyptian efforts have made progress, the Gaza fishermen’s committee said Israel would be extending the permitted fishing zone along the Mediterranean coast to a maximum of 15 nautical miles (28 kilometers), up from the previous limit of nine nautical miles (17 kilometers). Fishing had been off-limits since Gaza militants launched a rocket toward Tel Aviv last week, touching off rounds of short but intense cross-border fighting between the bitter enemies.

Israeli officials confirmed that the reopening of the fishing zone would go into effect Monday.

The lifting of some restrictions on the passage of people and cargo in and out of Gaza further indicated a strengthening of the cease-fire, which Hamas officials say would see Israel easing its blockade in exchange for guarantees of quiet.

Israeli and Hamas officials confirmed that the Erez and Kerem Shalom border crossings were re-opened, in a very restricted fashion, for the first time since violence flared up last Monday.

The first steps toward the restoration of calm were nonetheless punctuated by exchanges of fire along the border. Just hours after Israel announced the re-opening of its main Gaza crossings Sunday, a mortar shell was launched from the Gaza Strip toward Israel, the army said. 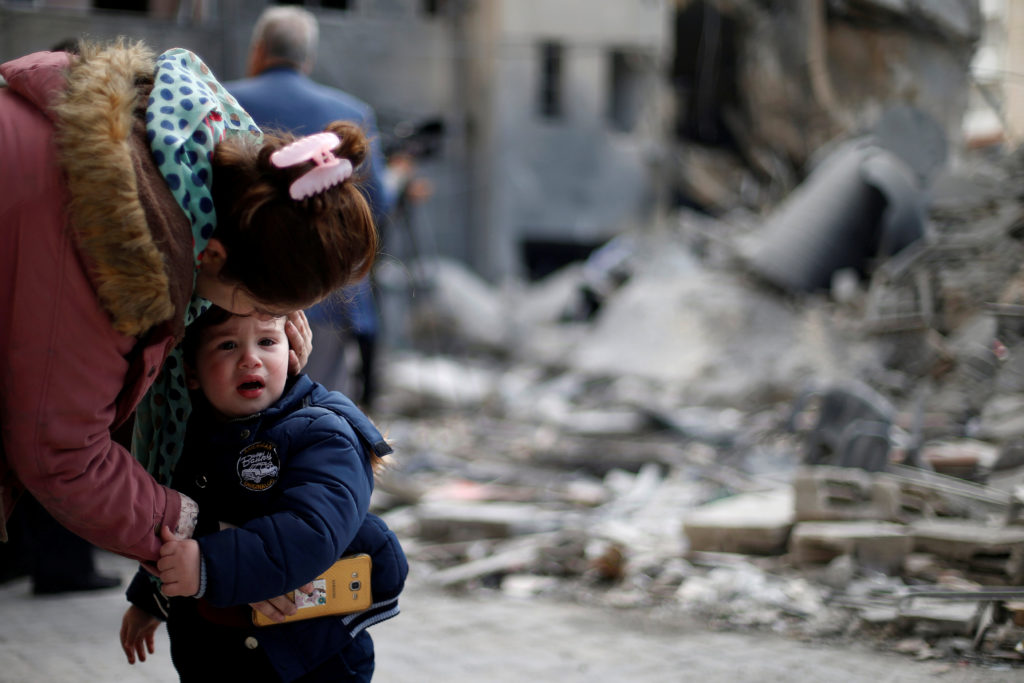 A Palestinian woman comforts her son outside their destroyed house after Israeli air strikes targeted a nearby Hamas site on Monday, in Gaza City March 27, 2019. Photo By Mohammed Salem/Reuters

The projectile did not cross into Israeli territory but did set off air-raid sirens in the country’s south.

Earlier Sunday, Palestinian militants launched rockets into Israel during the night, and the military responded with tank fire.

Four Palestinians, including three teenagers, were killed by Israeli fire on Saturday as tens of thousands of people took part in mass rallies that marked the first anniversary of demonstrations along the Israel-Gaza perimeter fence.

Dozens of activists approached the fence during Saturday’s demonstration, hurling stones and explosives toward Israeli forces.

Israel says it is defending its border but has come under heavy international criticism for the large number of unarmed Palestinian demonstrators who have been shot over the past 12 months.

Nearly 200 Palestinians have been killed by Israeli fire, while one Israeli soldier was killed last summer by a Palestinian sniper in Gaza.

Left: Israeli soldiers clash with Palestinian protestors over the border fence between Israel and the Gaza Strip, as it is seen from its Israeli side March 30, 2019 Photo By Amir Cohen/Reuters