Italy declares state of emergency in Venice amid high tides

Italy’s government declared a state of emergency Thursday in flood-ravaged Venice, seeking to release funds to repair the historic lagoon city after it was damaged by the highest tide in 50 years.

Prime Minister Giuseppe Conte described the flooding as “a blow to the heart of our country,” after spending Wednesday night in Venice, where world-famous monuments, homes and businesses were hit hard by the exceptional flooding.

Venice’s mayor said the damage is estimated at “hundreds of millions of euros.” Mayor Luigi Brugnaro blamed climate change for the “dramatic situation” in the historical city and called for the speedy completion of the city’s long-delayed Moses flood defense project.

The water levels reached 1.87 meters (over 6 feet, 1 inch) above sea level Tuesday, the second-highest level ever recorded in the city and just 7 centimeters (2½ inches) lower than the historic 1966 flood. Another wave of exceptionally high water followed Wednesday.

MORE: Why Jane Fonda is putting herself on the line to fight climate change

The exceptional flooding was caused by southerly winds that pushed a high tide, exacerbated by a full moon, into the city.

Although the waters have fallen from the peak reached late Tuesday, St Mark’s Square remained partially flooded on Thursday and a new peak water level is expected for Friday morning.

In Venice, the crypt beneath St. Mark’s Basilica was inundated for only the second time in its history. Damage was also reported at the Ca’ Pesaro modern art gallery, where a short circuit set off a fire, and at the La Fenice theater, where authorities turned off the electricity as a precaution after the control room was flooded. 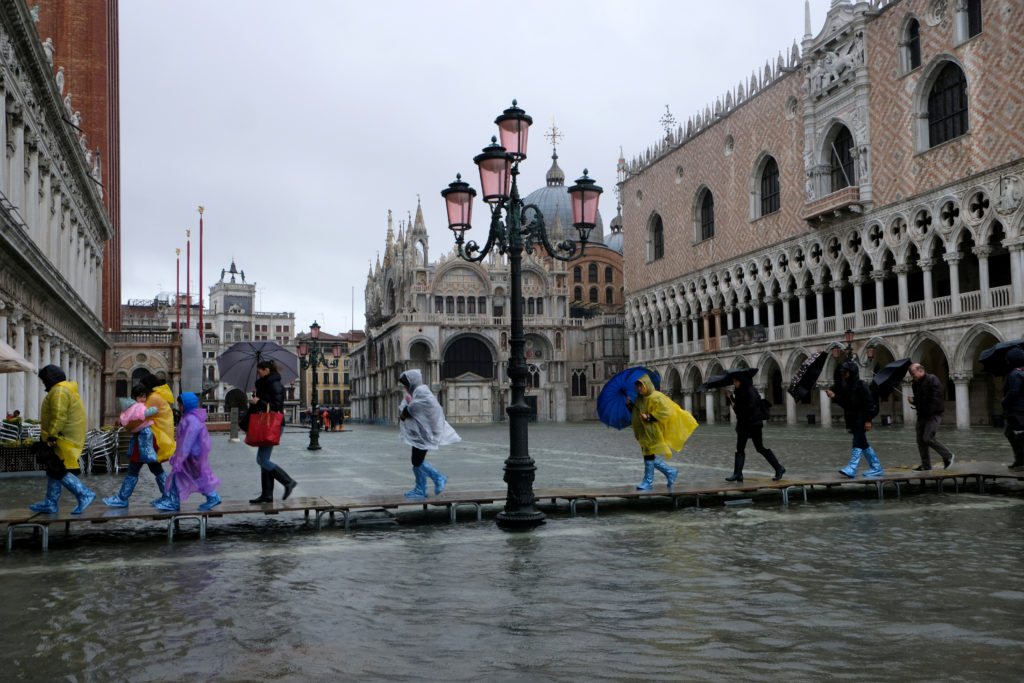 Venice for years has been struggling with unwieldly amounts of tourists, the constant deterioration of its fragile lagoon environment and a dwindling population.

Tuesday’s devastating floods have reignited a yearslong debate Moses, a multibillion-euro flood defenses project that has been under construction since 2003. The project has not yet been activated, after being delayed a number of times due to corruption scandals, costs overruns and environmentalists’ opposition over its effects on Venice’s lagoon ecosystem.

Italian Transport and Infrastructure Minister Paola De Micheli pledged Thursday that the Moses project will be completed by 2021, but part of it could start work even earlier.

Rising sea levels because of climate change coupled with Venice’s well-documented sinking make the northeastern Italian city built amid a system of canals particularly vulnerable to the elements. The sea level in Venice is 10 centimeters (4 inches) higher than it was 50 years ago, according to the city’s tide office.

The damages this week included five ferries that serve as water buses, a critical means of transportation in the city. Photos on social media showed taxi boats and gondolas grounded on walkways flanking city canals.