Speaking from a wood-paneled operation room, Russian President Vladimir Putin issued another stern warning to the West on Wednesday after his country’s military suffered a series of embarrassing setbacks in Ukraine.

Putin announced a partial mobilization of reservists that could raise available troop numbers by up to 300,000 and delivered a thinly-veiled threat of Moscow’s willingness to use nuclear weapons.

Here’s a look at key takeaways from that speech and the West’s reaction to it.

Why did Putin make the threats now?

Putin’s military call-up and possible nuclear threat comes days after the Ukrainian army pulled off a surprise counteroffensive to recapture territory around its second-largest city, Kharkiv, in the east.

“I want to remind you that our country also has various means of destruction … and when the territorial integrity of our country is threatened, to protect Russia and our people, we will certainly use all the means at our disposal,” Putin said in the televised address, adding with a lingering stare at the camera: “It’s not a bluff.”

But his seven-minute address was also broadcast as Russia prepares to hold referendums in Ukrainian regions it now occupies, including areas taken over by Moscow-backed separatist forces after fighting broke out in 2014. The votes start Friday and have already been dismissed as illegitimate by Ukraine and its Western allies.

West vows to stay the course

“We will stand in solidarity against Russia’s aggression. Period,” he said, denouncing Moscow’s plans to hold “sham” referendums in Ukraine as well as Putin’s “overt nuclear threats against Europe.”

NATO Secretary General Jens Stoltenberg echoed Biden’s theme. “This is a further escalation in Putin’s war. The international community must condemn this blatant violation of international law and step up support for Ukraine,” Stoltenberg said in a tweet.

Josep Borrell, the head of the European Union’s foreign policy, added: “Threatening with nuclear weapons is unacceptable and a real danger to all… World peace is in jeopardy.”

No changes in Ukraine’s goals

“We will act in accordance with our plans, step by step. I am certain we will liberate our territory,” Zelenskyy said in a TV interview with the German newspaper Bild.

READ MORE: Ukraine honors Olga Simonova, Russian woman who fought on its side in the war

A spokesman for Zelenskyy called the Russian mobilization a “big tragedy” for the Russian people. In a statement to The Associated Press, Sergii Nikiforov said conscripts sent to the front line in Ukraine would face a similar fate as the ill-prepared Russian forces who were repelled in their attack on Kyiv in the first days of the war.

“This is a recognition of the inability of the Russian professional army, which has failed in all its tasks,” Nikiforov said.

How will Russians respond?

Despite the Kremlin’s tight grip on Russia’s news media, some criticism of the war in Ukraine has been aired in Russia since the recent troop retreats.

Anti-war protests were held in 37 Russian cities on Wednesday, including St. Petersburg and Moscow, according to the monitoring group OVD-Info, which said over 800 protesters were arrested. 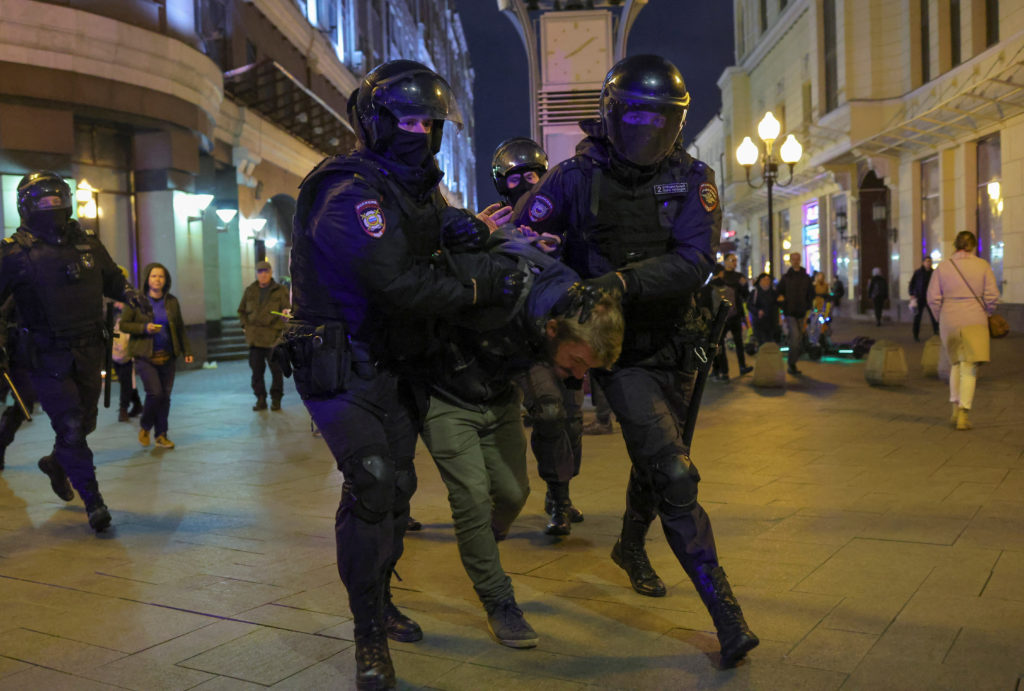 Russian police officers detain a man during an unsanctioned rally, after opposition activists called for street protests against the mobilisation of reservists ordered by President Vladimir Putin, in Moscow, Russia September 21, 2022. Photo provided by REUTERS

Russian political analyst Dmitry Oreshkin argued that Putin’s mobilization will make the Russian military’s failings in the war more personal to many Russians.

“Until recently (Russians participated) with pleasure, sitting on their couches, (watching) TV. And now the war has come into their home,” he told the AP. “People will evade this mobilization in every possible way, bribe their way out of this mobilization, leave the country.”