Emmanuel Macron has become the next president of France, the Associated Press reported Sunday.

Macron won over far-right Marine Le Pen in a race to replace the country’s socialist President François Hollande that had much of Europe on edge. The contest stood as a referendum on the future of France’s relationship with the European Union along with immigration. Le Pen campaigned on leaving the EU’s 28-nation bloc and the Euro currency while Macron said he wanted to bolster that relationship, which has been tested in recent years amid a wave of immigrants into Europe and a slumping Euro.

French election officials said turnout was lower than several recent presidential elections, with 65 percent of voters coming to the polls.

Thousands of Macron supporters who gathered near his campaign headquarters in Paris cheered as French television called the race for the 39-year-old political newcomer, who seems poised to become the youngest president in the history of France to chants of “We have won, we have won.”

Le Pen, his opponent, called Macron to concede the race, and Hollande, his predecessor, sent his congratulations. 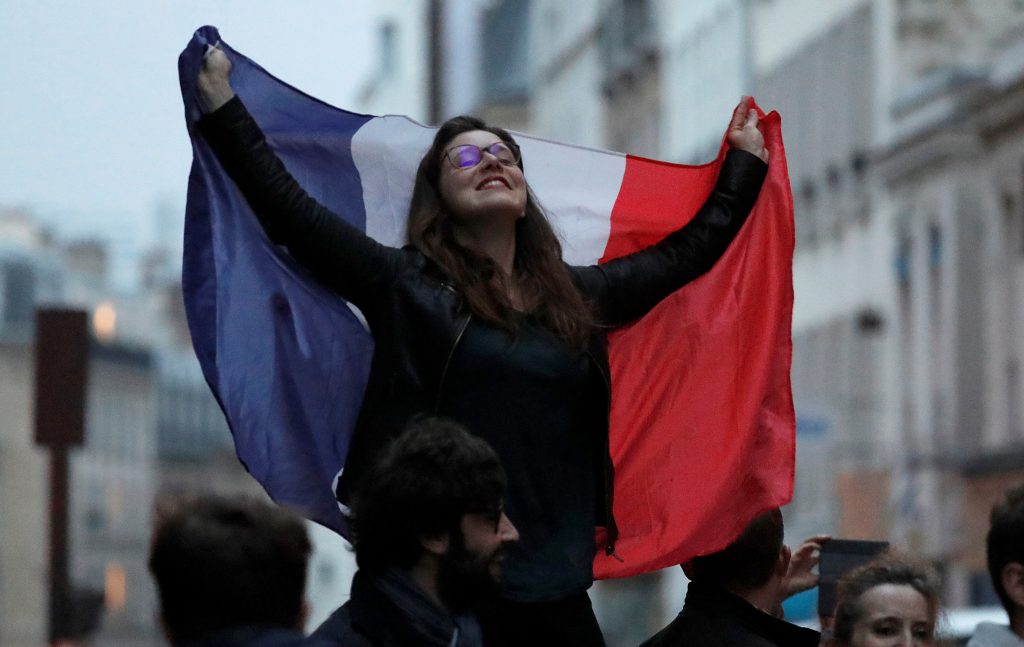 A supporter of President Elect Emmanuel Macron celebrates in Paris, France, May 7, 2017. Photo by Eric Gaillard/Reuters

European Commission President Jean-Claude Juncker praised Macron, saying, “the ideas that you defended of a strong and progressive Europe that protects all its citizens will be those that France will cherish under your presidency,” the AP reported.

Many of Europe’s leaders also sent their salutations to Macron, including Germany’s Chancellor Angela Merkel and British Prime Minister Theresa May. President Donald Trump also tweeted his congratulations to Macron.

Congratulations to Emmanuel Macron on his big win today as the next President of France. I look very much forward to working with him!

In a victory speech, Macron called his rise to the presidency a “big honor and an immense responsibility.”

“I will defend France, its vital interests, its image,” he said. “A new chapter in our long history has opened this evening. I would like it to be one of hope and of renewed confidence.”

Left: French President-elect Emmanuel Macron delivers a speech at his campaign headquarters after early results in the second round in the 2017 French presidential election in Paris, France, on May 7, 2017. Photo by Lionel Bonaventure/Pool/Reuters